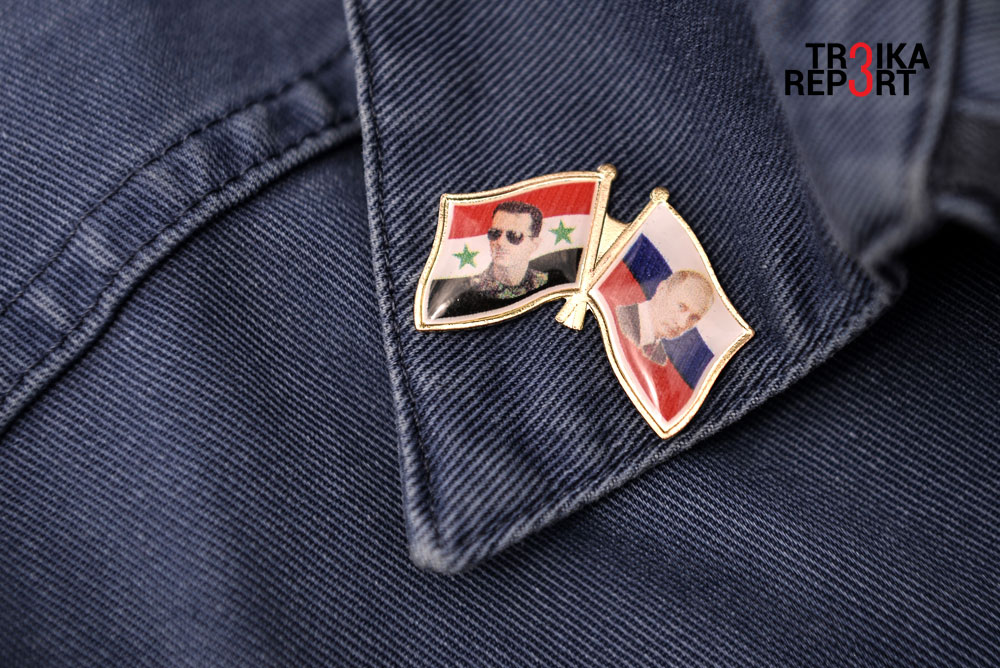 A badge on a serviceman's uniform at the Hmeimim airbase in Syria.

Ramil Sitdikov / RIA Novosti
Observers are hotly debating the true reasons for Russian President Vladimir Putin’s order to downsize and refocus the military operation in Syria, with some describing it as a tactical withdrawal while others label it an acknowledgement of failure. What is really behind the unexpected decision, and what will happen now?

On the face of it, it all looks convincing enough. President Vladimir Putin announced the pullout of Russia’s main military contingent in Syria due to the fact that the military had “largely achieved its objectives” and that diplomats had set the ball rolling for an inter-Syrian dialogue to end the civil war.

It should be put on record that Moscow has managed to persuade the main power brokers, e.g. the United States, not to set as a precondition for a comprehensive settlement at its first stage the departure of Syrian President Bashar al-Assad. This was a breakthrough, by all counts.

Moscow pushed the idea of embracing all the participants of the national drama, in particular the Syrian Kurds, to allow them to take part in the negotiations on the future of the country that they consider to be their own, with attention paid to the strong desire of the Kurds to be granted wide autonomy.

“It's clear that they (talks) should include the whole spectrum of Syrian political forces, otherwise this cannot claim to be a representative forum,” said Russian Foreign Minister Sergei Lavrov.

Syrian Kurds, just like the Alawites and the Sunnis loyal to al-Assad (originally, “80 per cent of the Syrian government army were Sunni Muslims,” revealed Robert Fisk of British daily The Independent) must be partially grateful to Moscow for changing the tide of the war in their favor. And this could be the key explanation of the sudden volte-face in the midst of an unfinished war.

The decision to withdraw was taken on the first day of the new round of talks. This could well serve as a sign that it is now up to the political rivals to try to find a common ground and map out for themselves either joint or separate co-habitation in this part of the Levant.

Yet could Moscow have a hidden motive here? Could it be the apprehension of coming into contact with Turkish and Saudi “boots on the ground,” should their warnings materialize?

Or is it a carefully calculated move to secure the gains of the military and diplomatic involvement in the Syrian civil war?

The logic could follow this line: Let’s preside, together with the co-sponsor of the current ceasefire, the U.S., over the partition of Syria, which will be turned into a “federation” with a not necessarily unfriendly new regime in Damascus and a Syrian Kurdistan that is more or less receptive to Moscow’s strategic interests.

Commenting on these theories for RBTH, Grigory Kosach, an expert on the politics of the Arab world and professor at the Russian State University for the Humanities, said that he saw “more substance in the second option.”

“Moscow might count on preserving its influence with the authorities, who would control two large territories: one stretching from Damascus to Aleppo all along the Mediterranean coast, and the other encompassing the northern regions inhabited largely by the Kurds. That would constitute the ‘prize fund,’ and it would probably suffice,” said Kosach.

How does this relate to the initial goal of dealing a deathblow to ISIS and other terrorist groupings?

“It can be claimed that Russian military involvement prevented the jihadists from grabbing a significant part of Syria,” said Kosach.

Notably, Moscow is not abandoning its initially unwilling allies in the fight against ISIS. The military service personnel at the Khmeimim airbase in Latakia province and at the port of Tartus will be in charge of “observing ceasefire agreements.” Moreover, Russia has voiced its commitment “to coordinating” with the United States the retaking of the rebel strongholds of Raqqa and Palmyra.

But given the poor record of previous interaction, this looks to be more about style than substance. The never-formalised solidarity of the anti-terrorist forces does not bode well for comradeship-in-arms on the battlefield.

It is likely that Moscow considers it has achieved its objectives if success in Syria implies Russia’s resumption of its role as peace broker and conflict settler in a very special region of the world.

Here the late USSR used to have a plethora of allies and a variety of tools “to make friends and influence people”: from cheap credits and handouts, mostly military hardware, to jointly constructed industrial facilities (the Aswan dam/hydropower plant in Egypt), local professionals trained and educated in Soviet universities and colleges, and the somewhat mystical lure of ideology.

For Russia, all this is unattainable. Still, Moscow has proved its often-reiterated narrative: In the case of regional conflicts in the relative proximity of Russia’s borders, it has the leverage to influence warring parties and set the stage for a settlement.

One can dispute to what extent the recent claims made by the Syrian opposition, Turkey and Qatar that Russian airstrikes led to death of civilians have tarred the image of Moscow.

Judging by the remarks in social media and those made on European online media comments’ pages, the efficiency of the Russian military in fighting ISIS has been duly appreciated as well as its resolution to do something with what has been described as an existential threat to conventional Islam and nations that cherish democratic values.

For the sceptics, the scaling down of Russia’s military involvement amid the still raging animosity between the parties to the civil war in Syria could be interpreted as a tacit admission of failure. It is a retreat.

For the loyalists, it serves as proof that the double-track strategy (beefing up the military muscle of Assad’s regime and engaging its moderate adversaries though diplomacy) has paid off.

For the latter it is a withdrawal. It fits well into the traditional distinction that “retreat” implies an enforced disengagement. Withdrawal, on the contrary, is a premeditated move with a long-term purpose. As the common wisdom articulates: “I'm not retreating, this is...a strategic withdrawal!”

As for the timing, it resembles the shrewd albeit routine tactics of the broker: buy stock when it goes down and sell when it heads up.