From Putin and Berlusconi to Soviet nostalgia and Greater Eurasia 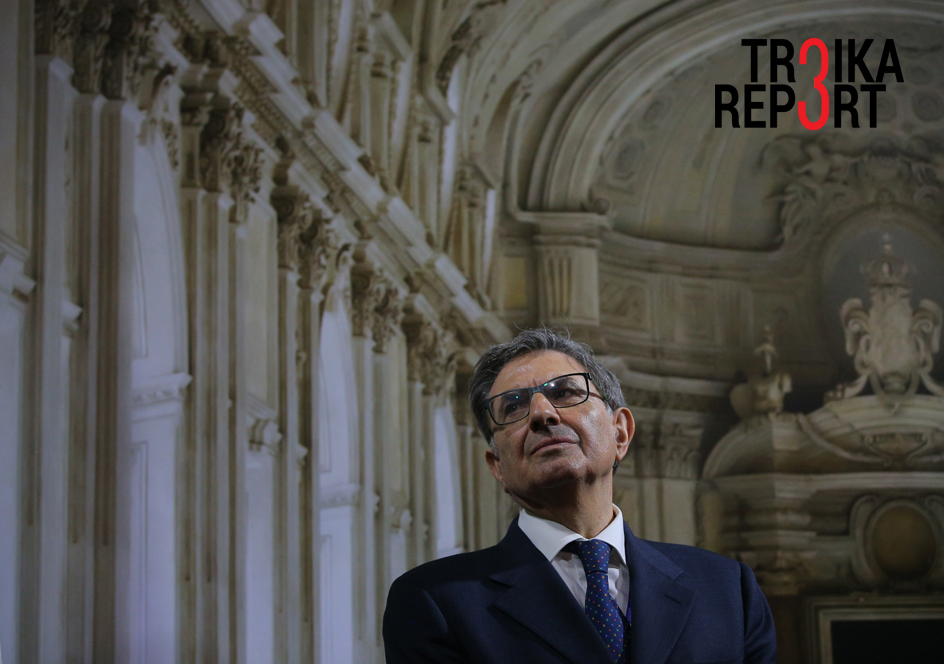 Ruslan Shamukov
In nearly 50 years of close contact with senior figures in the USSR, Italy and the West, Professor Antonio Fallico has seen it all. RBTH sat down with Professor Fallico to find out more about this Italian academic and novelist’s views on the links between Putin and Berlusconi, Soviet nostalgia and the geopolitical future of Eurasia.

The Sicilian-born former university professor Antonio Fallico, chairman of the board of directors of Banca Intesa Russia and founder of the Discovering Eurasia association, has talked to more politicians and oligarchs in Russia and witnessed far more international intrigues than many well-connected old hands.

Fallico has observed Brezhnev, the Catholic hierarchy, Soviet ambassadors and Communist Party apparatchiks up close; he once likened CIA chief William Colby to ideological boss Mikhail Suslov (both “slim, elegantly dressed and explicitly ruthless”), and has traced the behind-the-scenes policy-making between the USSR – and then Russia – and the West for almost half a century.

He could be defined as a shrewd financier, a deal-striker, an honest broker, an intermediary of the highest grade, a maker and a doer, but most of all he is a chronographer of history  who records his vast experience as a man of belles-lettres.

The man between Putin and Berlusconi?

Back in November 2010, the Italian daily Corriere della Sera claimed that the “shadow” mediator between Russian President Vladimir Putin and his former Italian counterpart Silvio Berlusconi was no other but Antonio Fallico, who has a good command of the Russian language.

The claim has never been substantiated. What nevertheless is beyond any shadow of doubt is Fallico’s sophisticated knowledge and understanding of Russia’s often obscure and messy realities, and his craftsmanship in navigating these dire straits.

In his second novel titled The Red Cat (“Il Gatto Rosso”), which hit the book stalls in Moscow after being translated into Russian this summer, Anton Antonov, the pen name Fallico has chosen, casts some light on the inner mechanics of the dealings conducted behind closed doors in world capitals during the Cold War.

Mixing facts and fiction, Antonov/Fallico reveals an imaginary (or is it?) intrigue of financial swindling operations masterminded and exercised by an unlikely alliance of the Vatican, Rome, the CIA and the KGB.

Writing about the tumultuous early 1990s, the author mentions a 46-year old blond and “inconspicuous” manager at the St. Petersburg mayor’s office who eventually displayed a “firm character” – and this particular detail made me ask Fallico how he personally saw the choice of Putin for the top job.

“He was the most trustworthy of all for the moment. My impression is that [Boris] Yeltsin was not genuinely preparing to bow out. I might support the assumption that Putin was promoted by a certain group that appreciated many of his positive competitive advantages.”

Fallico attended the St. Petersburg International Economic Forum this year, where Putin proposed constructing a Greater Eurasia, linking Europe, Russia and a rising Asia. At the same time Europe is being tempted by the United States to form the Trans-Atlantic Trade and Investment Partnership (TTIP). Which way will Europe go in the long run?

“The Trans-Atlantic Trade and Investment Partnership will hardly emerge in its originally proposed format. After all, all the particulars of the deal are still being kept secret. I have a feeling Europe is in no hurry to join the TTIP.”

– But isn’t Europe also dragging its feet in making a pivot to Eurasia?

“Greater Eurasia is a grand concept. Few in Europe are aware of it. Few have the ability to analyze it and appreciate all of its geopolitical consequences. Efforts must be made for people to be aware of it. Europe must realize that the way to Asia lies via Russia. Once this happens, the idea of Greater Eurasia will jump-start.”

– Does it have to be an “either-or” choice like the one Kiev was forced to make with the EU-Ukraine Association Agreement?

“Not at all. The basic principle to be adhered to is the balance of interests. It means that while accepting the concept of Greater Eurasia, Italy, just like other European nations, will not abandon its trans-Atlantic dimension.”

Russian renowned director Alexander Sokurov, who made waves by shooting films on Lenin and Hitler, recently used an unusual metaphor: Putin is suggesting sort of a “Noah’s Ark” (he also made a film titled Russian Ark).

I asked Fallico what he made of this metaphor:

“An integrated common space from Lisbon to Vladivostok and further on to Singapore is the optimum solution to prevent confrontation and ensure a harmonious sustainable development.”

– Should Europe accept the opportunities offered by a “pivot to Asia” with simultaneous positive engagement of Russia, as Moscow suggests?

“In my opinion, Putin is a realist, with a keen understanding of what is coming in global affairs, and a vision too. This quality is a distinction that sets him apart from many statesmen in Europe, Asia and the Americas. The concept of a Greater Eurasia is very appealing. Its content should be enriched gradually, in particular, through cooperation of China, India, Pakistan, Russia, the nations of the Shanghai Cooperation Organization [SCO]. We should go forward step by step.”

Actually, it could be inferred that Fallico supports an integrated Eurasia, one far removed from Halford Mackinder's 1904 Heartland Theory and its emphasis on the importance of domination of the region by a single power.

After all, the SCO, often mentioned by Fallico, looks like the nucleus of an integration project within the “geopolitics of the third wave” aimed at saving Eurasia from a looming economic deluge and what would be an even gloomier global adversity.

The courage to cherish moral values

For an expat with several decades experience in surviving life in the Soviet Union and subsequently in Russia, and apparently enjoying every bit of it, the break-up of the “evil empire” as Ronald Reagan described it, and the abandonment of the historical experiment with building a better society, no matter what “ism” (Socialism or Communism) defined it, turned out to be a bitter disappointment.

Not that Fallico nurtured any illusions about the USSR and its ideological messianic drive and naivety. His disappointment is due to the frustrating results of the “transition period” that ensued and the triumph of what he terms “capitalism in its wildest incarnation.”

“When the ‘end of all ideologies’ was proclaimed, it set the stage for the triumph of ‘wild capitalism,’ depriving people of morale. But morale is essential for a person to remain human and for society to preserve its human face.”

The title of his second novel is telling: The main protagonist was nicknamed “Red Cat” because, as Fallico explained to me, this is a pun in Italian. The main character was a member of a left-wing party, and “red” was a description of his political affiliation. But rosso also means “red-haired” or “foxy,” “rufous,” “carroty,” and is a synonym of an “artificial color,” Fallico explained. It hints that his anti-hero was never a true believer, or a man of integrity and virtue.

“This book I dedicated to my son with the key message: Never be seduced by the lure of money!”

There is an appealing romantic strain in the nature of the ever-energetic and enthusiastic entrepreneur (although Fallico might object to this assumption). Yet how else to interpret this courageous confession, which seems to be part of his unarticulated credo?

“Sticking to dogmas predetermined the fall of the USSR. Still, only heartless people don’t share some nostalgia over the USSR, a nostalgia for the ideals of humanness that inspired citizens of this now-extinct country. I believe these ideals will be reborn some day. I do believe this will happen.”

However, Fallico is no naïve sleepwalker. Here is his answer to a typically Russian question on the utmost priority in life:

“A follower of Epicurus would say that this is happiness. A monetarist would say it is the size of GDP. I think in terms of harmony. Some claim salt is harmful. Others retort that without an intake of salt our body starts to extract it from our bones, leading to self-destruction. I think all extremes should be ignored.”

Professor Fallico has been a no-nonsense banker long enough to know both the price of walking with one’s head in the clouds and the value of moral principles. But the latter seems to matter more for him.

Perestroika 30 years on: Analyzing the consequences for modern Russia>>>