Looks to die for: Why this Russian ‘bodybuilder’ could lose his hands 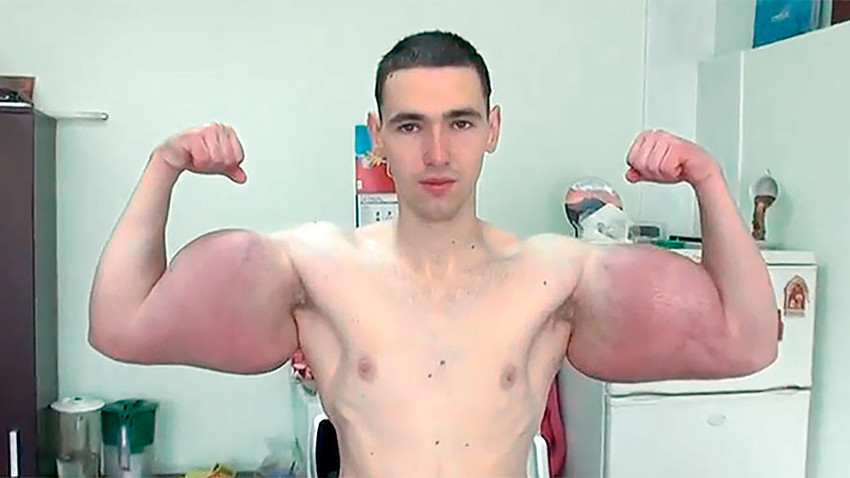 Ruptly
There’s a big difference between pumping iron and pumping yourself full of injections to make your muscles bulge unnaturally. Kirill Tereshin is taking the easy route to getting ‘ripped’ by doing the latter, and he’s putting his body in serious danger.

He’s known as the “Synthol Prince of Russia,” “ Synthol,” and the “Synthol Knight.” This is because 21-year-old Kirill Tereshin from the southern Russian city of Pyatigorsk has two enormous appendages: His arms are among the largest in the world. But as you may have guessed by his nicknames, it’s not because he works out - he injects them with , a substance comprising 85 percent oil, 7.5 percent lidocaine, and 7.5 percent alcohol.

Pumping the oil into one’s arms, instead of pumping iron, can cause them to enlarge to bizarre proportions. Doing this does not improve strength though, the is considered doping and banned in professional sport.

People get hooked on injecting but it’s dangerous. Consequences including tissue necrosis, fat embolisms, lung infarction, infection, and even limb amputation have occurred in those who do it. Still, the “ freaks” continue.

Tereshin turned to bodybuilding after serving in the army. He took the short route and chose injections. He admits he’s lazy: “I want everything fast, I don’t want to train, to eat properly, to follow sleep schedules.

“Synthol is safe. But all people are cowards in this world. No hotshot is unwilling to improve their body,” Tereshin says. Naturally, he considers himself one such hotshot - and has no fear.

He idolizes Brazilian bodybuilder Romario Dos Santos Alves, who has injected most of his upper body with the oil. But he stopped when doctors told him his hands were at risk in 2013.

Next, Tereshin plans to enlarge his shoulders, chest, and legs. He also wants to cover his whole body in tattoos, have a dentist whittle his teeth into vampire fangs, and change the color of his eyes.

“I will be popular around the world. Nobody will be able to create a body like mine,” he tells his YouTube followers. “My aim and my dream is to become different from others,” he adds.

Reaction to the ‘Synthol Knight’

Tereshin has been drumming up interest in the media and online. He’s featured in several articles and talk shows.

His YouTube channel and Instagram have many followers, but not everyone is a fan. Each of his videos is slammed with hundreds of negative comments: Some tell him to stop, others say there’s no happy ending to his story.

People are shocked that he’s ignoring medical advice. Some professional sportsmen have also told him to stop. As for his parents, they also don’t approve of his radical transformation. But Tereshin doesn’t plan to stop anytime soon.

He’s sure is safe. “Show me any hands that have been amputated during 40 years of use in the world,” he says.

But the medical world doesn’t agree. During one TV show featuring Tereshin his doctor told him abscesses are forming on his hands. Worst case scenario: They could be amputated.

Kirill Sarychev, a Russian powerlifter and multiple world record holder, has offered to train Tereshin for free, to help him sculpt his body naturally - the only condition, that he stopped injecting. Tereshin refused. Let’s hope he comes to his senses soon.