Now you know where to meet in the Moscow Metro 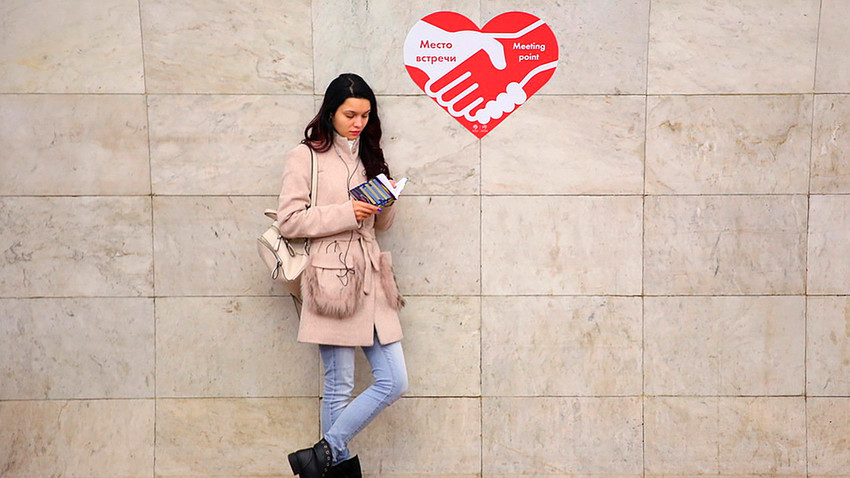 The Moscow Government has decided to help people navigate their way around the capital’s subway by placing special “Meeting Point” signs in all metro stations excluding ones that are monuments of cultural heritage. It follows a successful pilot project to set up “meeting points” in five stations in the center of Moscow.

The sign is easy to recognize – a big red heart with two shaking hands inside and the words “Meeting Point” in Russian and English. Such signs “mark the place where it’s most convenient to appoint a date, meeting, or tourist group gathering,” the Moscow Government web page explains.

Don’t get upset if the station you need isn’t provided with special meeting points. You can always act like all true Muscovites have done long before any signs and just arrange to meet “in the center of the hall” as they say (i.e. the middle of the platform) – it’s a tradition and the spot is always easy to find. Except, perhaps, for Partizanskaya metro station in the north-east, where there are three railway tracks instead of two. But there you can just arrange to meet outside as there is only one way out.

Actually, it’s logical: “first” or “last” wagon (i.e. railcar) describes which end of the train, as it stops at the station, will be closer to the exit. Sure, it might be easier to explain which way to go by naming the street you need – but probably Muscovites just don’t correlate them with metro exits, so they prefer to go with the ends of trains.