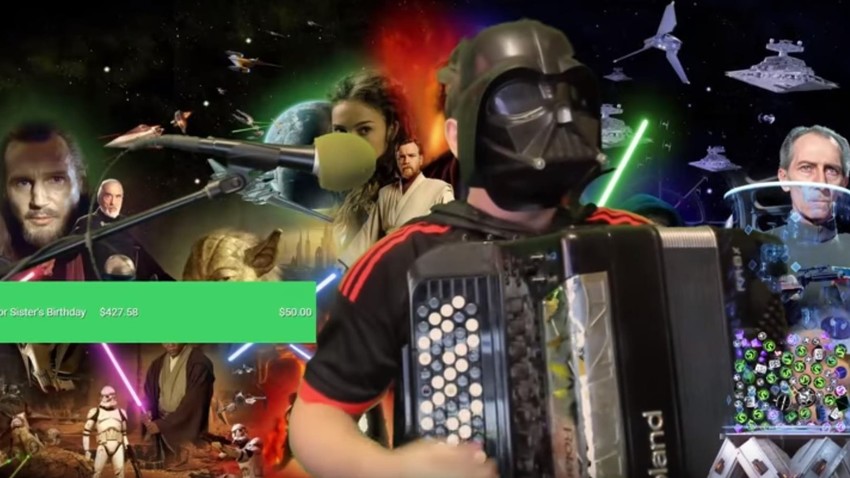 MOZG888VADIM
At first things weren’t looking good, but a gamer shared the link and the views (and money) came flooding in.

Vadim Cherubimov, 29, from Vladimir (about 190 km north-east of Moscow), started playing his accordian online with one goal in mind: He wanted to raise money to buy a gift for his sister.

However, only 10 people tuned in when he went live one night. But all was not lost - Lady Luck was smiling down on him. A user playing the six-fi game Eve Online chanced upon Vadim’s Twitch channel and shared it among members of the virtual Goonswarm Federation. As a result, over the next few hours the musician was inundated with requests, including a parody of the Beatles song “Let it Bee” called “Little Bee.”

He even put on a Darth Vader mask before promising to play Star Wars themed tunes. He also bashed out “Never Gonna Give You Up" by Rick Astley.

Here is one of Vadim’s Star Wars themed numbers.

Vadim raised about $750 and attracted 500 listeners. He said his sister will choose a gift herself – her birthday is in April.

“Perhaps something precious, or a lot of new clothes, or maybe we'll buy her a new phone,” Vadim said.

“Honestly, Vadim did all the work. He got one person hooked and after I shared it he had the same effect on a ton of goons and other players,” explained “Klavas,” who shared the Twitch page.