Why are Russians so afraid of cold air drafts? 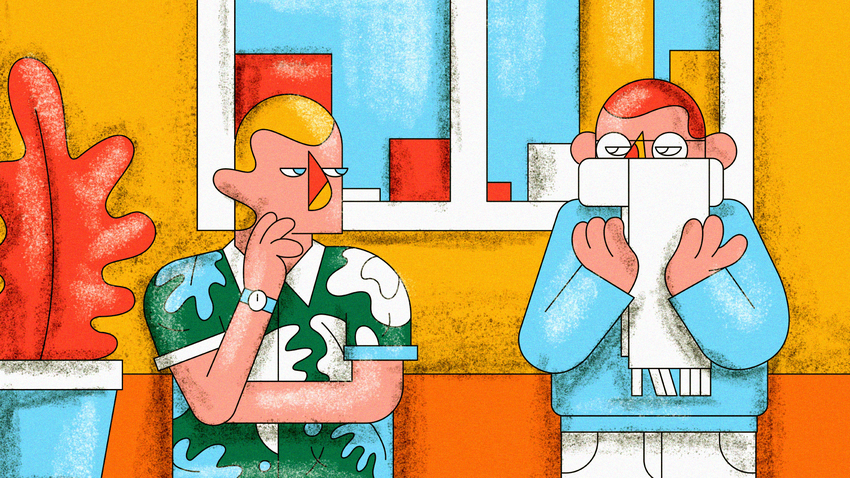 Natalya Nosova
A lot of people hate drafts in the country, and when we say hate, we mean they turn white at the thought of a cool current of air entering their office of house. But why?

Air conditioning wars are waged each summer in Russian offices. Some people fight for the right to open windows, while others strive for the stuffiest of existences. Then there are those who demand the air conditioning is turned on full, so everyone freezes to death.
Each family has a tale about the draft - there is no end to the absurdity. “During my childhood I, and then ten years later my younger sister, played on the swings with shawls on our heads. It would have been fine, but the swings were inside our house! Our grandmother was afraid that our ears would get cold in the draft,” says Muscovite Anna.

This no laughing matter. Russians will fight tooth and nail to either defend or deter the draft. If you’ve ever traveled on a train overnight in the country, you’ll know.

People were fighting the draft myth a century ago. “Many are afraid of drafts and oppose the flow of fresh air into the room… Others are actually afraid of opening the window. However, it must be noted that stale air is much more dangerous for your health than a draft,” wrote the Life and Health medical magazine in 1909. Yet, nothing has changed. This fear is passed from generation to generation. Newspapers and the TV continue warning of the apparent danger and Russians continue believing it.

“The first thing I do when I go inside a café with my children at the ceiling and try to understand where the air conditioner is not blowing too hard. In my parents’ house, in the room where we and our children sleep, the air conditioner hole is taped up,” says one Moscow resident. “My mother-in-law has the same thing. She feels drafts coming from everywhere. From a chair, a stool. She says that when I get old, I’ll feel the same,” another Russian says.

This may seem like a cultural paradox. Siberia exists in Russia, and the country boasts the coldest place on Earth, Oimyakon, where people dive into frozen lakes for fun and eat ice cream in the winter - but they tremble at the thought of a wisp of cool air entering their house.

Many Russians believe a draft can have an adverse effect on your ears, teeth, and facial nerves. They think a draft can strike even the sturdiest and healthiest person down with a fever. The most terrible thing is that a draft works in secret. You roll down your car window to breathe some fresh air and by the evening your eyes are teary and your tooth hurts. “It was a draft!” a Russian will say before shutting all windows. So if you find yourself on a stuffy bus on a hot summer’s day in Russia, get ready: All those sweaty people fanning themselves with newspapers and magazines will most likely get uppity if you try to open the window.

“I think that Russians are so afraid of drafts (I don’t want to offend anyone) because they don’t like fresh air, wherever it comes from,” wrote British cardiologist Shamindra Perera in 2015. No, Shamindra, Russians are just afraid of the cold (as strange as it may seem). It all starts in childhood when kids are forced to wear tights, leggings, pants with a fleece lining, a sweater, a fur coat, a hat, even if it’s not below zero outside.

But the paranoia concerning drafts does not end with childhood.

The average Russian thinks that if it’s cold outside, it needs to be roasting inside the house. In Russia heating is usually controlled by the state and is pretty cheap. Many homes still have irregular radiators and from October to they function on such a level that it is possible to walk around naked.

“When people get a cold, they attribute it to a draft... They shut the windows tight. The sweaty, exhausted people go out into the cold, get sick and again blame the fresh air,” one user posted online.

Perhaps nothing can be done about this. Many cultures have their own unique beliefs. For example, many African tribes believe that with the help of magic you can steal a person’s penis, explained journalist Yasha Levin. “In Africa men protect their penises with a magic talisman. In Russia, in order not to get ill, people shut their windows and sit around in stifling rooms.

However, those suspected of stealing penises in Africa are often lynched right on the street. But in Russia, if you create a draft, in the worst case some old lady might yell at you in a bus. So it could be worse.