Why lapti are the most Russian of all shoes 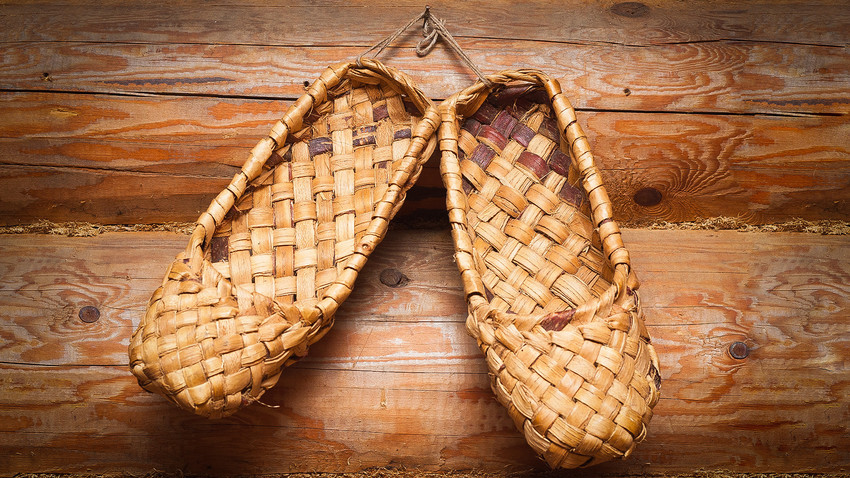 Legion Media
Making this unique footwear was an essential skill for any Russian. They were used as to ward off evil forces and for transporting house spirits from one dwelling to another. Lapti are traditional Russian shoes made from bast.

Old, ragged, and worn-out lapti (singular: ) hung on fences and inside houses, so they were the first thing a visitor would see upon entering. Lapti a charm for blocking the evil thoughts an unknown visitor could bring into a home. Also, old lapti were used to carry the domovoi (house spirit) from one house to another when a family was moving. Lapti were peasant shoes: a good pair cost around three kopecks, while the cheapest leather boots started at five roubles. Russia was even ironically called “the land of lapti” – i.e. the land of poor peasant folk. 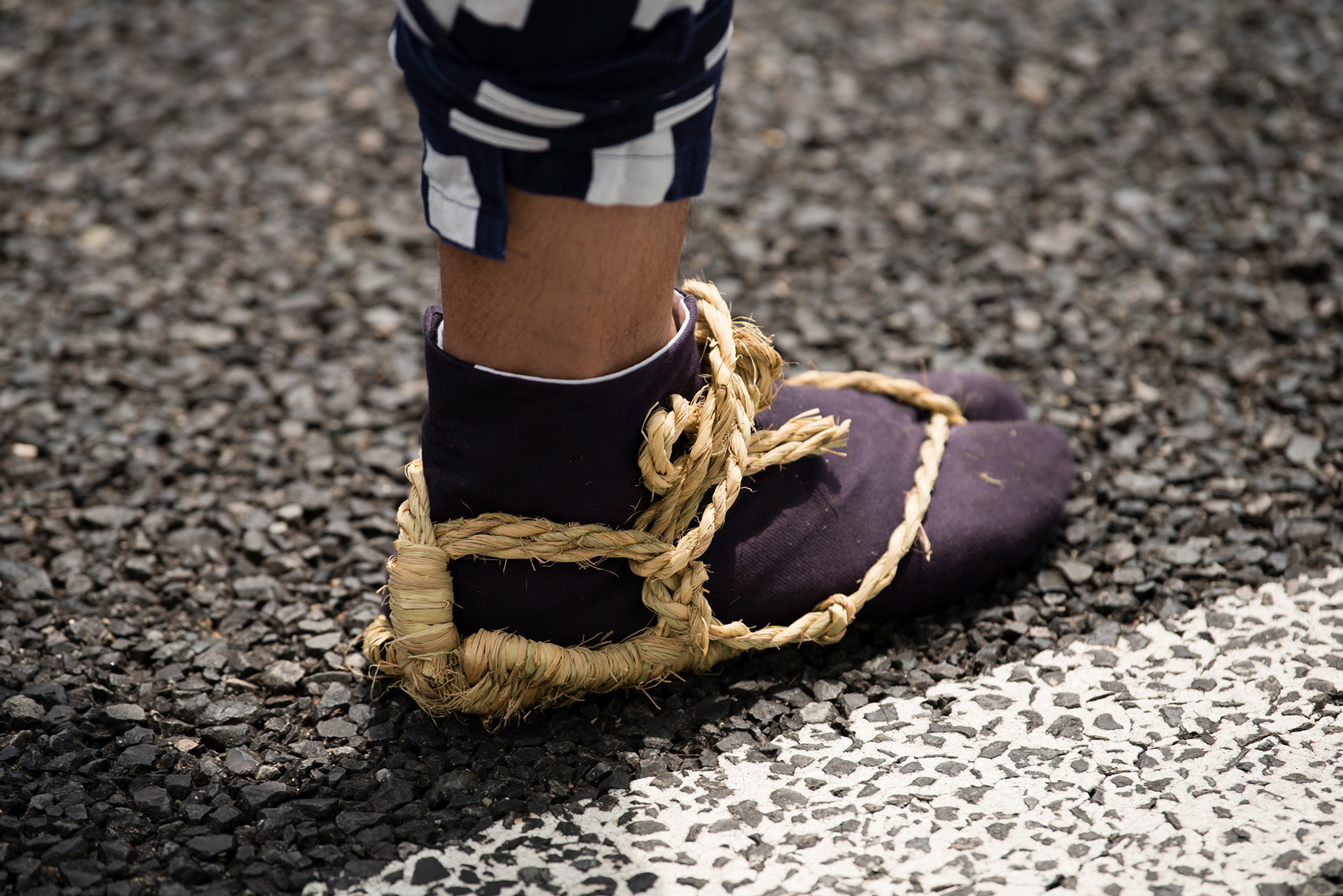 Footwear from plant fibers was made and used by peoples of different cultures. Polynesians made shoes from coconut tree fibers to walk on the bottom of the ocean while fishing (and not get hurt by stepping on stones or clams). In a Missouri cave, a whole collection of such shoes were found, made by indigenous Americans. Japanese  are also sandals made from rice straw rope.

The first mention of lapti in Russia, the land of woods and forests, dates back to 12th century, but archeologists prove the shoes are even older than this. How were they made? Tree bark was stripped (from birch, linden, oak, elm, etc.) together with bast and stored. Before making lapti, the bark was soaked in water, then the bast divided from it and cut into strips – ready for weaving. 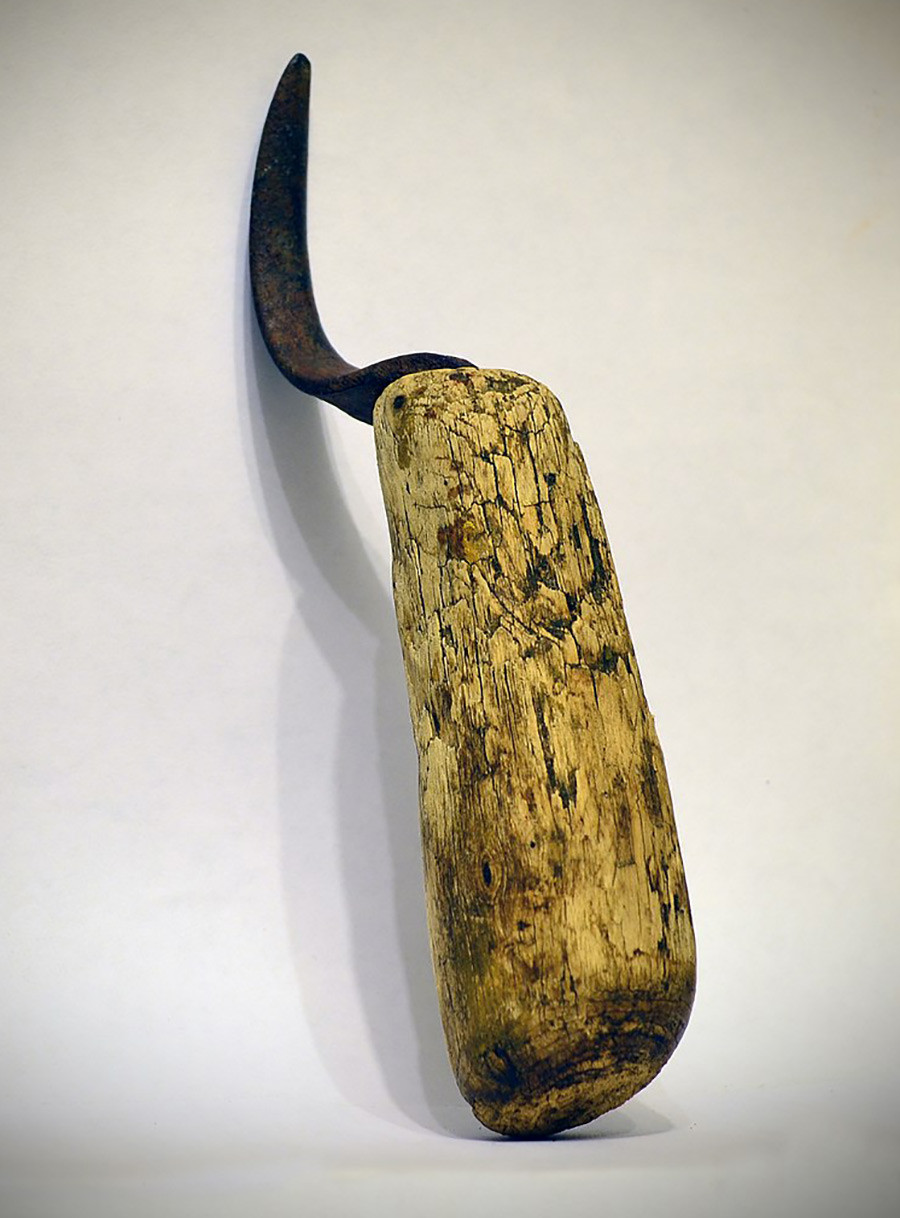 Russian folktales, , the “keeper of the forest,” is often seen making lapti himself and could endow a man with the art of weaving footwear. “Grandpa Mikhail had a hard time dying because he hobnobbed with the . In his youth, he brought his weaving to the forest, put it on a stump with tobacco and bread, a treat for the . Overnight, the made lapti for himself with this awl. In the morning, gramps picked it back up and since then, he made exceptional lapti that were very soft but didn’t break,” a peasant woman told a Russian ethnographer 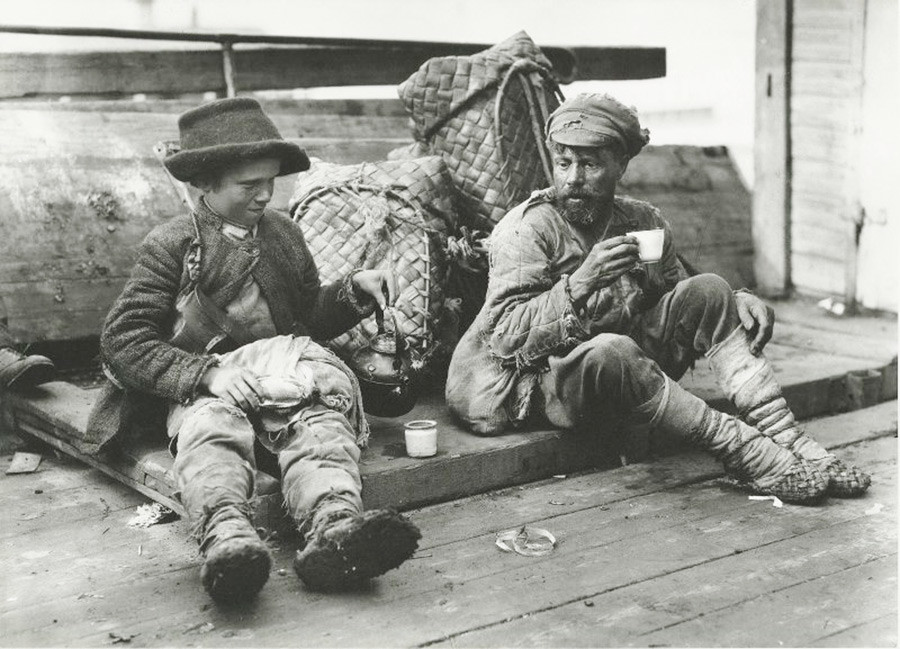 grown-up man would wear out good lapti in 10 days, while during the harvest they might only last four days. Old lapti never tossed out – oh no; instead, they were hung on the fences or in the barn and house. The shoes were used as a protection charm because they were weaved with intersecting strips of bast in the form of a cross. Obviously, Russian peasants didn’t store all the lapti, but instead of tossing them out they burned them as it tradition dictated that it was forbidden to throw them away. 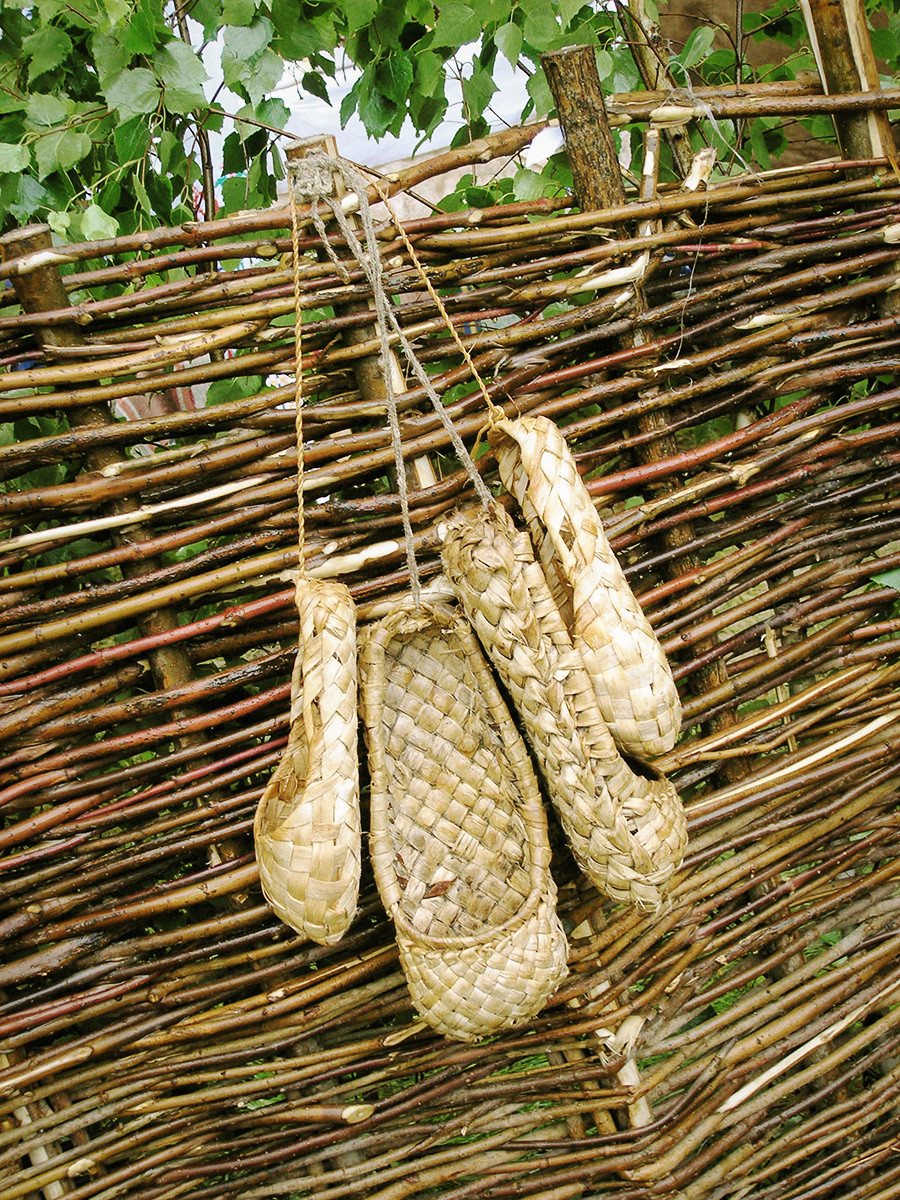 regions had various methods of lapti weaving. In Central Russia, bast was laid diagonally, and weaving started from the heel of the shoe. In western parts, weaving started from the toe end and bast was laid athwart. Moscow lapti were high on the ankle, while in the North they were low and had pointed toes. Winter lapti were produced from double layers of bast and sometimes had a leather sole. There also “weekend” lapti, thin, painted with ornaments, and tied with a woolen ribbon.

Everyone could make lapti – and this is why they're the most Russian of all shoes. There is even an old Russian saying about a drunk man: “one that can’t even tie the bast” – which means “he can’t do the simplest thing.” That’s how important weaving was for a Russian. After a boy or a girl made their first lapti, were burned in the stove and the ashes swallowed (with water or bread) by the first time weaver – after this ever so tasty treat, Russians believed one would never forget how to make lapti. 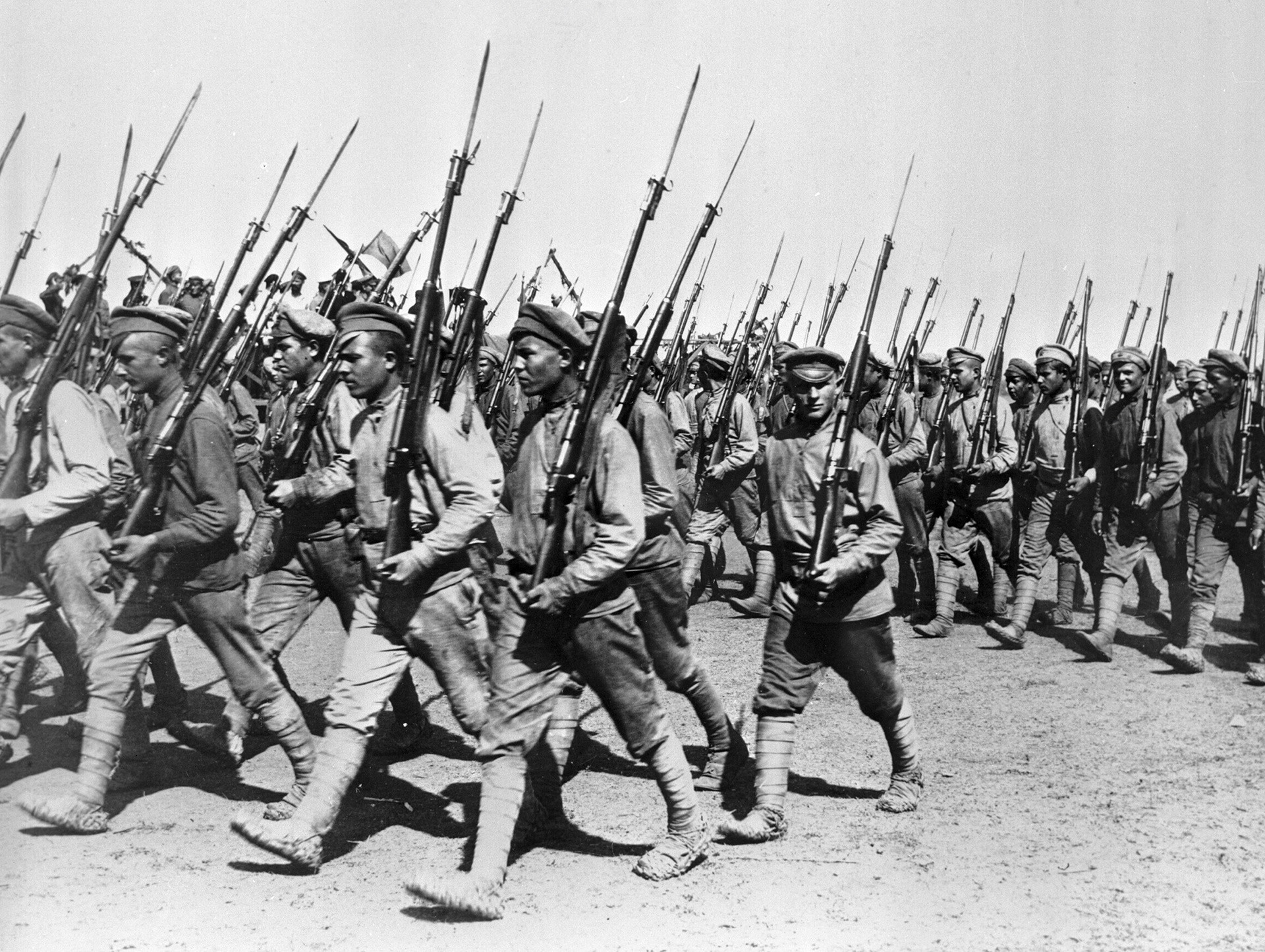 Lapti were used as everyday footwear until the beginning of the Soviet Union. During the Civil War in Russia, most of the Red Army wore lapti. There was even a state-organized commission, CHEKVALAP (The Extraordinary Commission for Valenki and Lapti) that supervised the supply of the army with lapti. After mass shoe production from leather and rubber started in the USSR, lapti slowly became obsolete, although they are still sometimes worn in the countryside to this day – this is exotic even for Russian peasants and country folk.

But how could Russians produce lapti for centuries without destroying all the trees? Now, this secret is lost. We can only suppose Russians possessed some method to take the bark off a single tree numerous times for several years. Any ideas? Let us know in the comments section.