What’s it like to ‘come out of the closet’ in Russia? 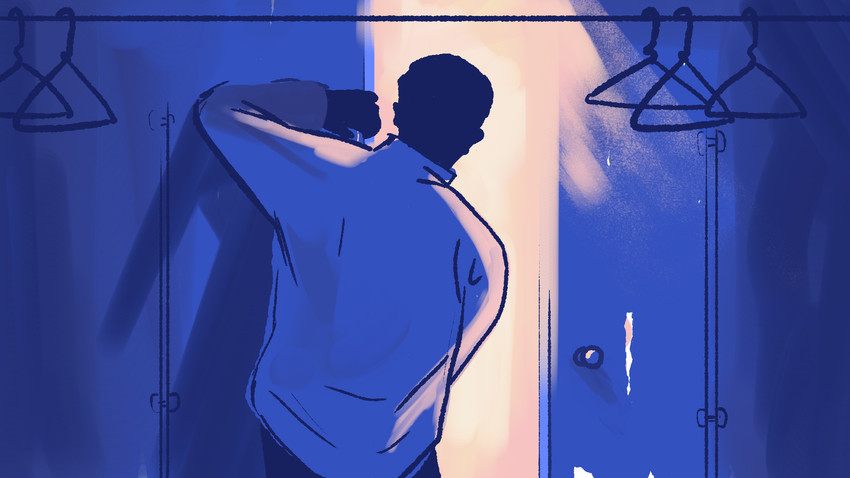 Becoming open about yourself is a great thing - but is it always an option?

Irina Baranova
All around the world, it’s hard for people born different to speak out on their sexuality – especially in Russia, with its patriarchal set of values. Nevertheless, people do come out – in order to free themselves from fear.

According to a 2017 report conducted by the Levada Center, 35% of Russians assess their attitude towards gay people as “very bad”, and a further 20% – as “suspicious”. This doesn’t mean that homophobia is ingrained in all Russians – surely, a multitude of Russians treat the LGBT community with respect. Yet homophobia exists and still causes many problems in Russia.

The roots of homophobia can be traced back through history: from 1934 to 1993, male homosexuality was considered a crime in the Soviet Union and punished by up to 5 years in prison. Now, homosexuality itself is not a crime – however, there is a law, adopted in 2013, that prohibits “propaganda of non-traditional sexual relationships” among minors. The authorities say there is nothing discriminatory about this law and that the government doesn’t have any problems with homosexuality. This, however, doesn’t prevent homophobia from stoking aggression. 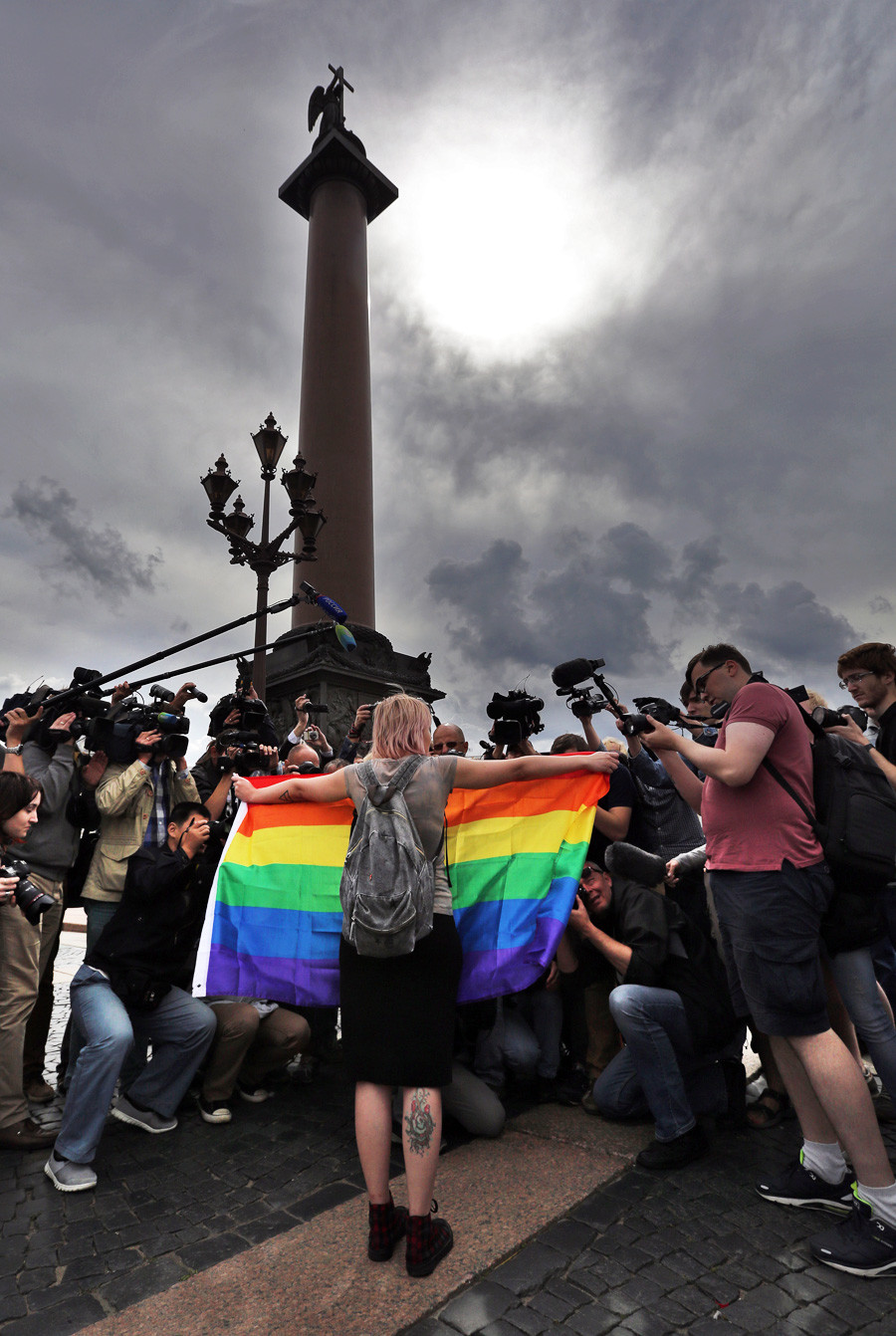 An LGBT activist stages a one-person protest against hatred and intolerance in St. Petersburg's Palace Square.

“I faced situations when I was attacked and beaten [for my orientation] – in the streets, in hallways…” says Yevgeny Glebov from the city of Irkutsk (5000 km east of Moscow), and he is far from being alone in this. Between 2010 and 2016, at least 267 hate crimes (including murders, beatings and robberies) were committed against LGBT people throughout Russia. And these are only the cases where the courts specifically emphasized the victims’ sexual orientation – which they don’t always do.

Even if we exclude violent cases, LGBT people can’t always find tolerance, even in their own families. According to psychologist Yekaterina Petrova, who conducted a study on the experiences of adult LGBT people coming out to their parents, for 55% of parents in Russia, the initial reaction is denial. “Many parents don’t at first take their child’s non-heterosexual orientation seriously - they consider their sexuality ‘a phase’, or ‘a rebellion’,” Petrova writes.

Despite all the risks, however, many LGBT people in Russia prefer to come out and be open about their sexual orientation. But what gives them the motivation? 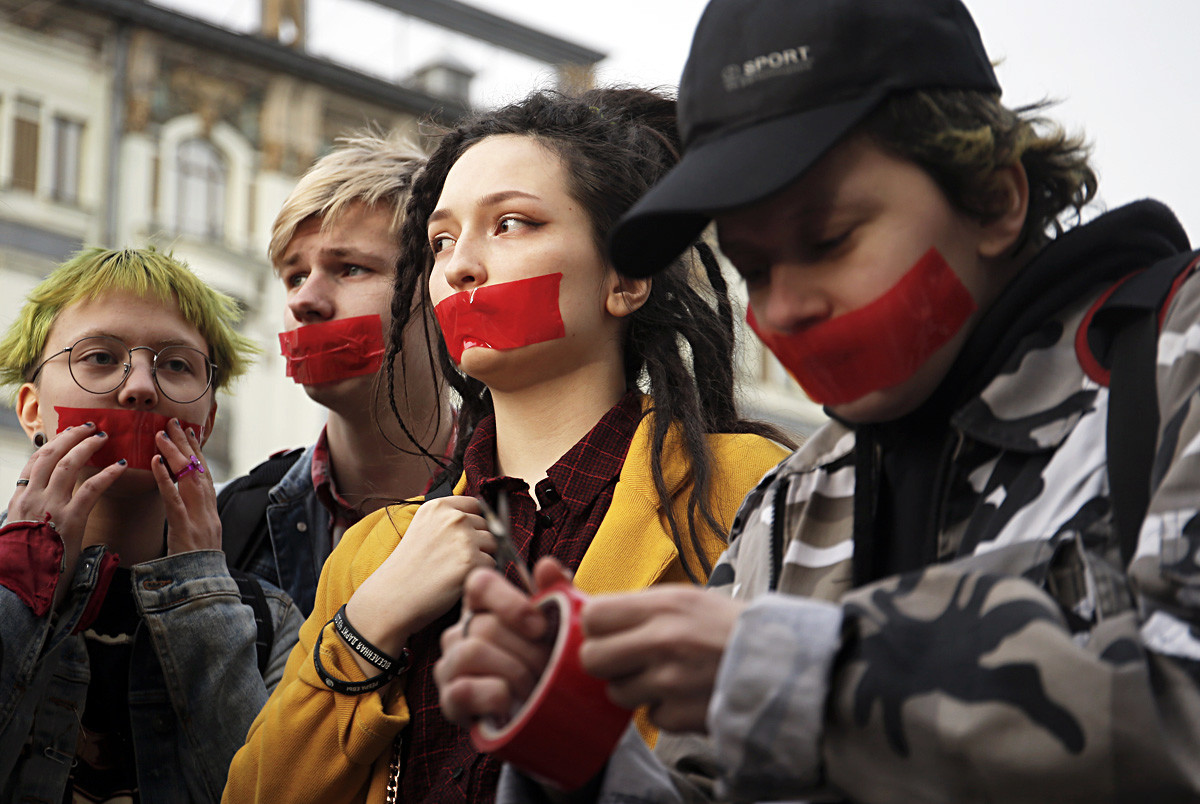 Activists of a local LGBT community putting tape over their mouths as they protest against discrimination in Saint Petersburg, Russia.

Generally, people start to embrace their sexuality between the ages of 10 and 13, and that’s when the problems start for LGBT people in Russia. “No one ever told me it was bad, but children already know that ‘gay’ is something you shouldn’t be: through chit-chat, jokes, comments on TV,” explains psychologist Kirill Fedorov, talking to Russia Beyond.

Being openly gay and having had to come out himself, Kirill can explain that it was not easy. “I had a very close relationship with my mom, but back then I felt that as soon as I told her I was gay, our love would be over, that it would put an end to my life,” he recalls. For several years, he soothed himself with thoughts that it was just a phase that would eventually pass. “I met people, had my first relationships, first sexual experience… It lasted until I was 17 to 19 and then I understood: my teen years were over but my homosexuality hadn’t gone anywhere.”

Living in the shadows 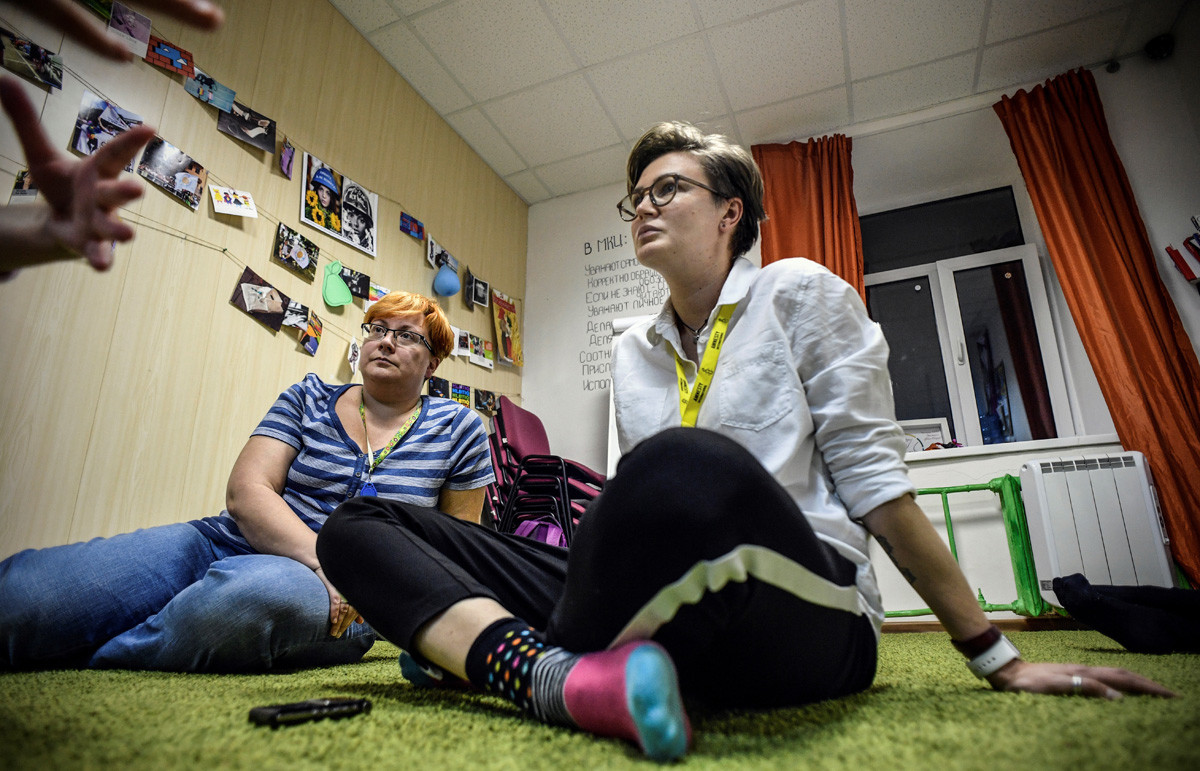 A picture taken in 2017 shows Olga Baranova (R), director of Russia's first shelter for LGBT people, speaking during an interview in Moscow.

Psychologists compare being gay without coming out with living on a volcano – where the volcanic eruption represents the fear of being “caught”. Even though Kirill had accepted that his orientation wouldn’t change, he still couldn’t tell any of his friends, let alone his parents.

“It’s a very neurotic situation, you feel instantly anxious,” says Kirill. “Gay people who hide their personal life have to lie when answering endless questions like, ‘Hey, why are you still single? Why don’t you go out with someone?’” Fedorov had to invent a relationship with a much older woman who wanted to keep their affair secret.

Such an existence is far from comfortable – that’s why many people, overcoming their fears and doubts, come out. Another openly gay Russian, journalist Renat Davletgildeyev, explains: “Nothing frees you as powerfully as coming out, in full honesty and to the public. You openly claim there is nothing wrong with being gay and you don’t have to lie anymore!”

According to Kirill, many LGBT people start coming out to friends and associates first, telling them the truth in face-to-face conservations and observing their reactions - which is what he did: “I was lucky to receive tons of support, everyone was like ‘That’s OK, everyone has their own tastes and preferences!’”

After that, comes the hardest part – telling one’s parents. According to Yekaterina Petrova, facing the fact that your child is non-heterosexual is particularly stressful for a Russian parent. This is explainable: many elderly people in Russia still remember the USSR with its anti-gay laws. Add to that contemporary homophobic vibes and a widespread faulty notion that homosexuality is a matter of choice – and you get parents who see the homosexuality of their child as a tragedy, as their failure.

And not everyone is ready to embrace such news gracefully. For instance, Pavel Vardashvili said in an interview with Afisha magazine that his mother suggested electroshock therapy to him after learning he was gay.

In search of understanding 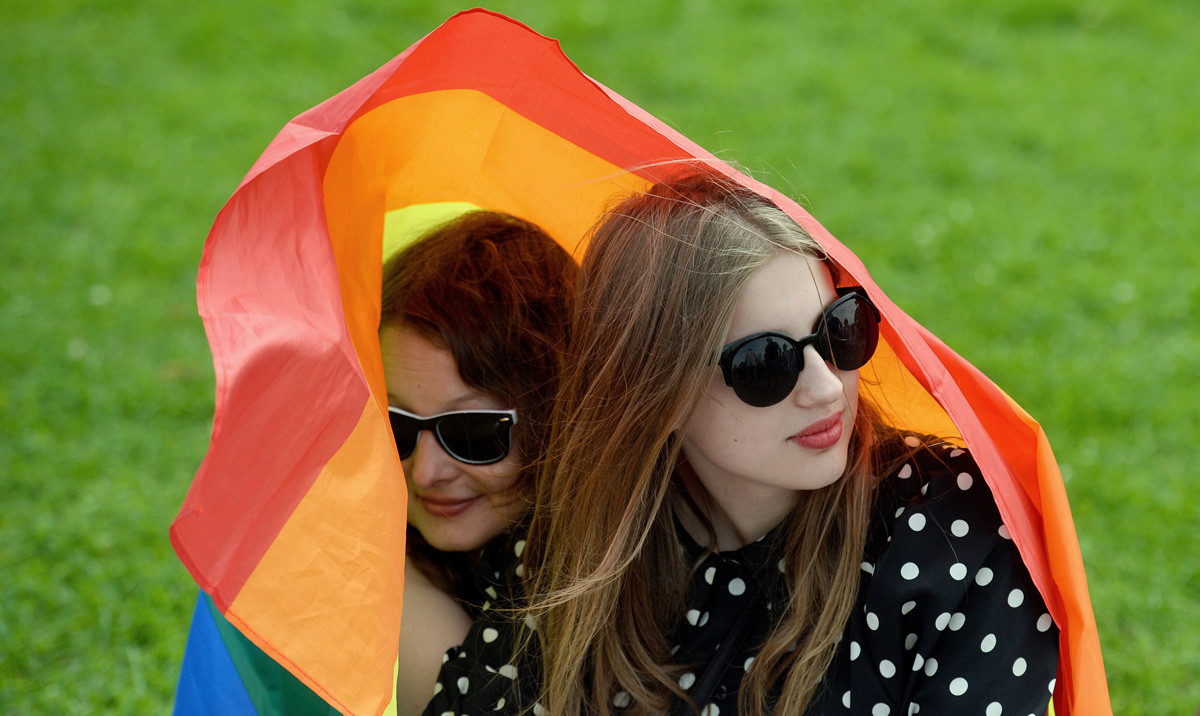 Activists shelter under a gay rights' movement rainbow flag during the gay pride rally in Saint Petersburg in 2017.

Of course, some parents show more understanding. Renat says he never had to hide his sexual orientation from his family (or friends) – they were completely OK with it from the start. Kirill also successfully came out to his mother and father without too much turmoil, though he had expected huge difficulties.

“It’s always more complicated with fathers because they have their patriarchal views on manhood, the dos and don’ts of a ‘real’ man and so on,” Fedorov explains. “I expected aggression, but he simply said that even though it was hard for him to deal with that aspect of my life, I would always be his son, and that he loved me and would always be on my side.”

Nevertheless, while talking with LGBT people about coming out, psychologists suggest preparing for the worst-case scenario – just to be on the safe side. One should be sure there won’t be any physical violence involved and know where they can spend a night in case the talk goes wrong.

Once LGBT people have revealed themselves in front of their nearest and dearest, there is the last step – publically announcing their sexual orientation and hoping it will be received well. Of course, it’s hard to guarantee the desired results here.

“On October 11, 2011, the International Coming Out Day, I posted a message on my VK page stating that I was gay. I was a student back then, and the next day it felt like everyone was talking about me at university. Some people were discussing it behind my back, some supported me, a couple of people stopped communicating with me – but generally, there was no aggression,” says Kirill. And that was it. Apart from online messages from homophobes sending him death threats - which he still receives now and then, Kirill is rarely bothered anymore. Sadly, because many openly gay people continue to receive the same treatment.

Renat has been a de facto open gay since he first understood his sexuality but had never made it public until an Afisha special feature in 2012, dedicated to gay people’s lives in Russia. “I felt it was the right thing to do, as I’m a journalist and maybe my words can influence someone,” he says.

We also have an article on the LGBT in the Soviet Union - back then, the situation was even worse than now.