You don’t need to speak Russian if you play an instrument: An American’s story 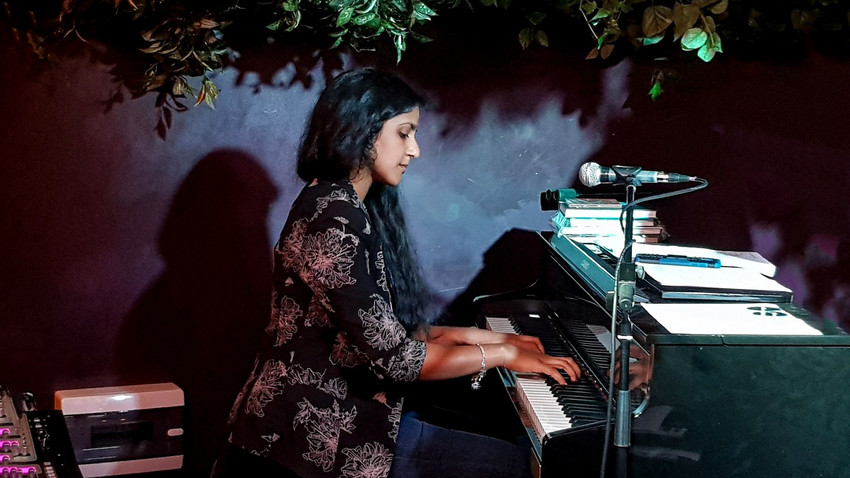 Michelle Daniel
It is rare that you find yourself in a place where the majority of people can’t freely converse in English. But Russia is a special case. It is the first country I visited where performing music with the people has allowed us to have entire conversations with barely a word exchanged.

I live near a metro station on the orange line, by the statue of Yuri Gagarin along the Third Ring in southwest Moscow. For three months, as a visiting American jazz pianist and vocalist, I have embraced the frenetic tempo of this dramatic, dynamic, and exceedingly complex city and discovered Moscow suits my personality more than I can explain. It was home from day one.

Presently, it is nearly 20:00 on the first of July, and I step off a packed train on the purple line, number 7 and make my way towards the middle of the platform at 1905 Goda Street. it’s still a minute or two earlier than the appointed meeting time with a local professor and musician.

While waiting, I contemplate the metro system, which I absolutely love. It’s clean, spectacular, and a universe of live music—it seems to be everywhere. I come from Austin, Texas—the purported “Live Music Capital of the World”—but I can say without a twinge of conscience that I have heard more live performances in Moscow without even trying than any other city I have visited, including New York where musicians also play above and below ground at will. But New York’s subterranean acoustics are incomparable to Moscow’s—the latter is something of an aural paradise and that’s not opinion, that’s fact. This week alone I’ve heard two incredible, vibrant female classical violists; several flamenco, rock, and even country guitarists; a few traditional accordion players; and a couple of Parisian-flavored trios. Although many sung in English, few could speak it well. My favorite group thus far is a quintet of young men who play instrumental covers of pop songs—and dance while they’re at it. Their musicianship was good, but their energy and overall performance is what made them great. People always stop to watch—families, couples, single men and women, old and young. Mind you this isn’t leisurely St. Petersburg. This is Moscow. Time is money. But yet, everyone seems willing to miss a train or two or three to hear a funky rendition of a tune they know and maybe even love There is so much comfort in what is understood. But it’s not what these musicians are saying (for if they’re playing covers, they’re saying nothing new), rather, it’s about how they’re saying it. Throw some rubles into the open tuba case.The metro can wait. 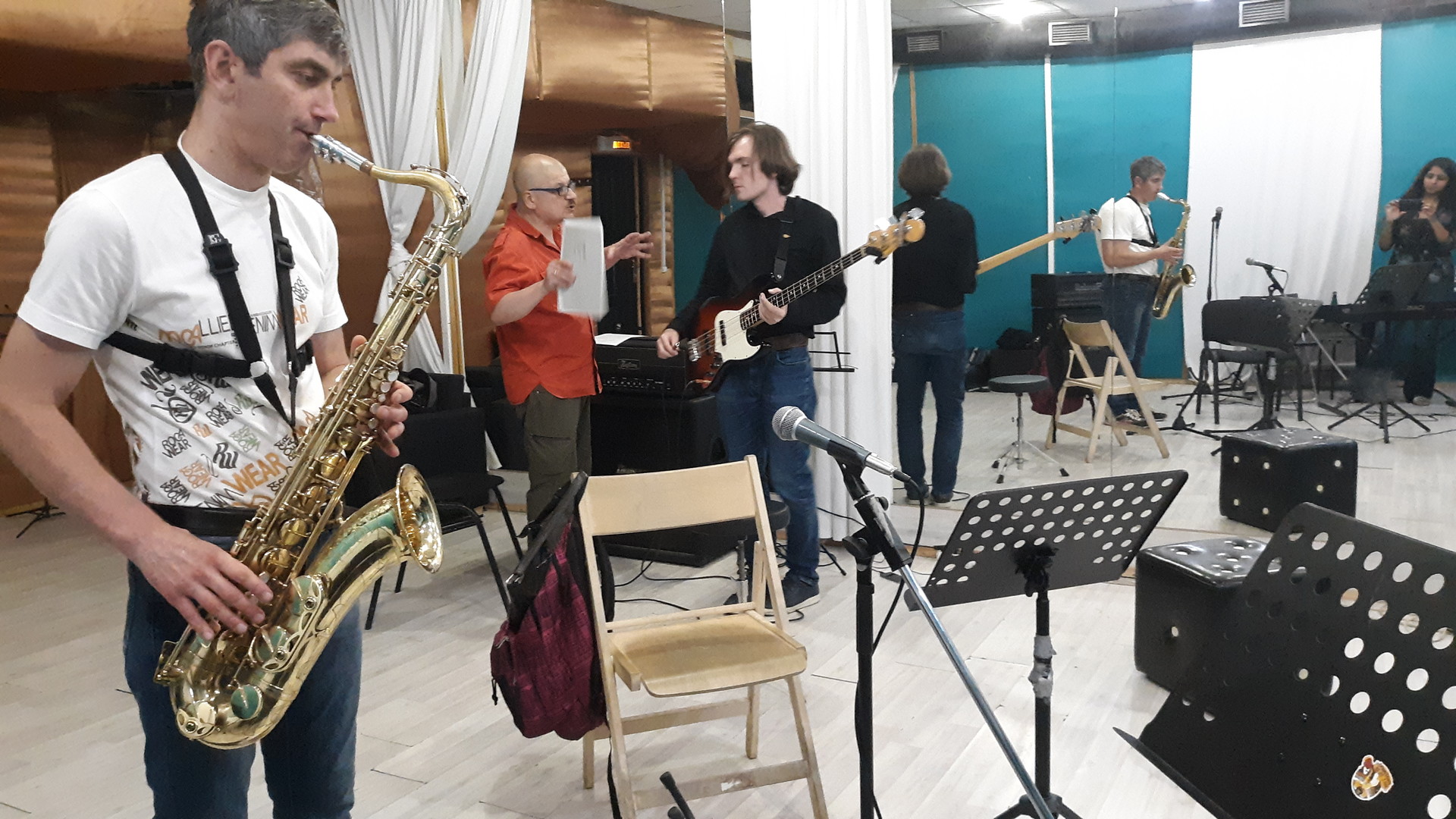 I bring my attention back to 1905 Goda Street.Another train screams its impending arrival; As expected, the middle-aged Russian I’m waiting for disembarks—punctual as usual. Andrey greets me in his usual pleasant but muted way, shouldering a black backpack in which I know is a certain tool of his trade. We start walking, exchanging small, minor chit-chat on the way up the long escalator,.

Exiting the station into the mild-weathered evening, we start walking Andrey points to a small monument in the middle of a tunnel entrance which is dedicated to a street musician who was a “fixture of the city” for years until his death. I marvel. A place as immense as Moscow, in which all of Rhode Island could easily fit, and which honors in such lofty ways the great Russian composers which the world has embraced, could still have such small-town, intimate sensibilities as to care so much about one person who entertained out of love for no renown.

Jazz in the Underground

Moscow is a fantastical mixture of the old combined with the new, all in a sprawling, ever-growing fashion.  With every new metro stop I visit, I come into a necessarily different part of the city, crushing any sense of “knowing” or “understanding” or even “normalcy” into which I unsuspectingly succumbed. But this continual surprise dulls the senses after a time: you grow accustomed, you stop thinking about it, the bizarre or unique becomes commonplace. Standard.

We walk through Khrushchev-era buildings—everything stoking in a sense of isolation. I’m a little uncomfortable, but Andrey is not and talks away about how this building was one thing and now it’s another, and over here was a “music conservatory” but now “it’s moved across the street”. And gradually, I relax.

Finally, we approach a squat building that I would have avoided if I were by myself. As soon as we enter to lower-than-expected ceilings and very narrow hallways, he explains, “This was a bomb shelter during Soviet times.” 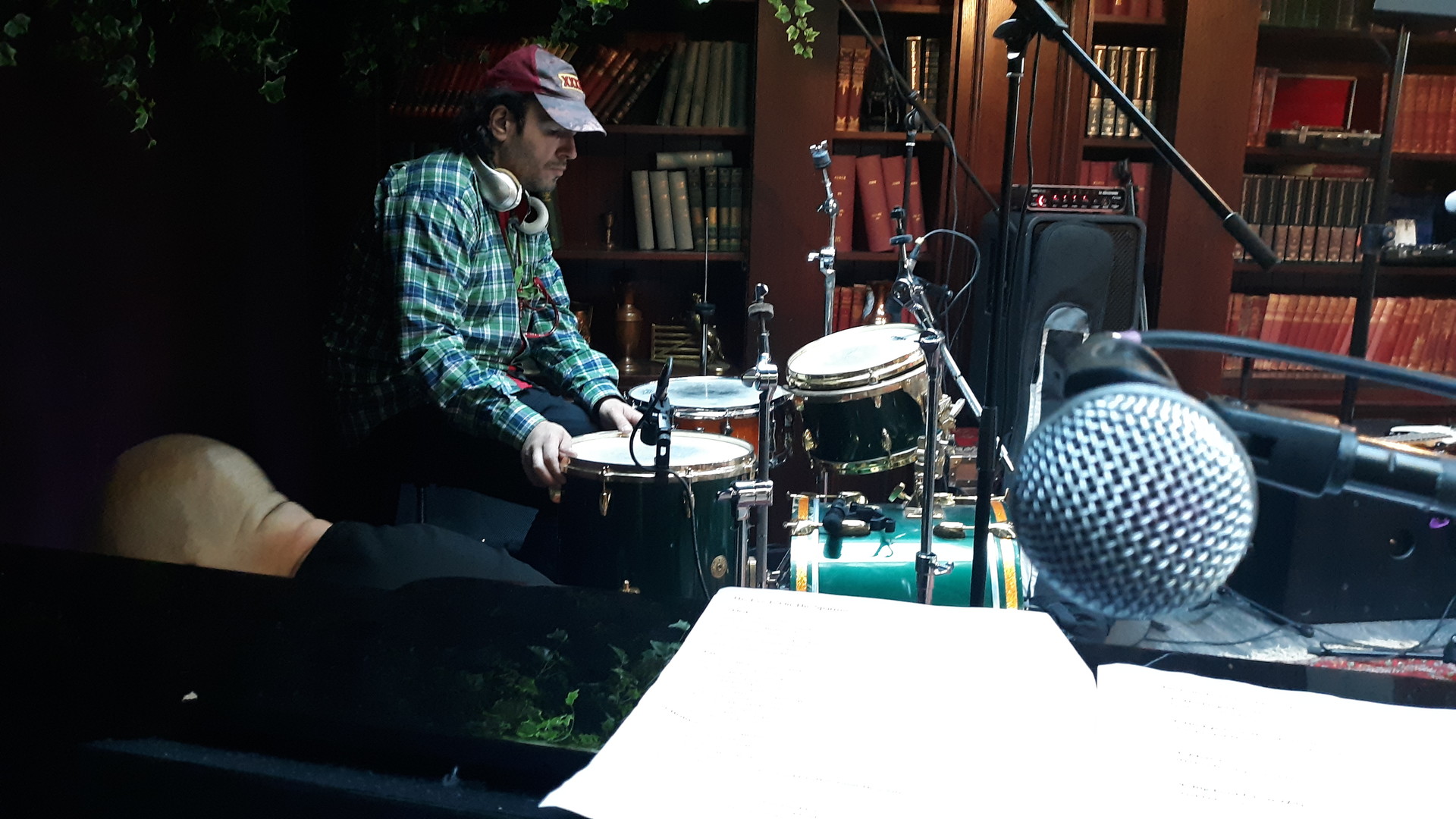 Now, my lens has adjusted, and I’m intrigued by this space—apparently layered with history.

We proceed into a small, inoffensive reception room of sorts. The walls around us are pulsing. I feel it right away, the thumping, booming, and the ground under my feet vibrating. I’m not alarmed. These are familiar sensations, signature rumblings of the musical language being spoken in adjoining rooms.

Andrey converses in Russian to another fellow behind the desk. I don’t understand everything they say, but I get the gist. Then, the bassist on the couch voices a question, and Andrey turns to him in some surprise. Apparently, he was waiting for Andrey too. He introduces himself as Igor, and he speaks only Russian. We can only get out a few sentences in each other’s language before we give up with lopsided grins. ‘How is this evening possibly going to go?’

Andrey gets the go ahead from the front desk and we proceed back into that low-ceilinged hall, this time with Igor in tow, walk all the way to the end, and then down a few sets of stairs. We pass room after room filled with practicing bands of varying styles and sounds, with singers and without. It’s all interesting, but hardly new to me. This is a language in which I can claim native fluency (it only took 24 years of study). 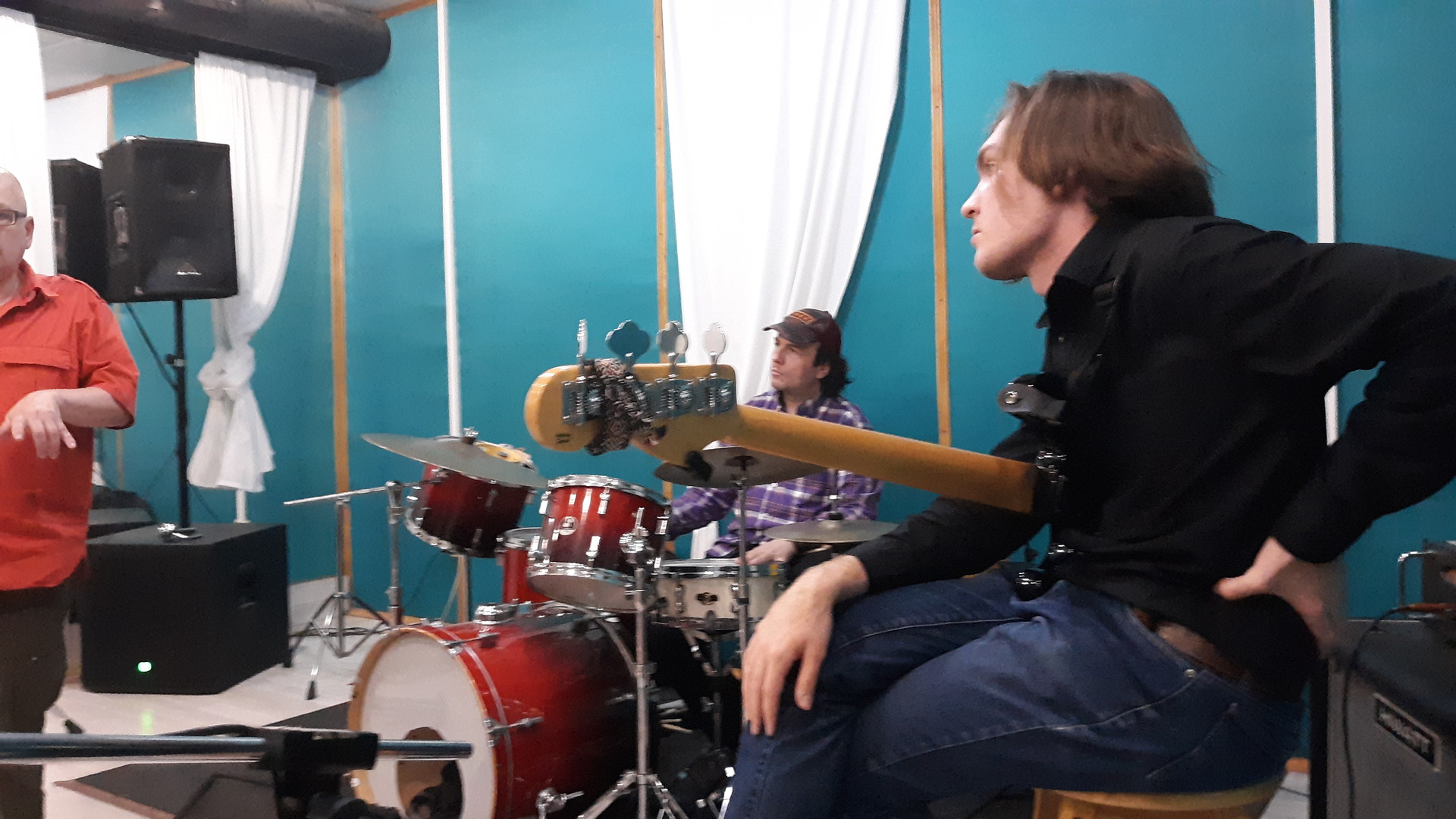 We enter a rehearsal room and find waiting for us, a drummer and a saxophonist—the latter has a Selmer Mark VI tenor, a model I instantly recognize because there’s one just like it in a closet of my apartment back in Texas. But woodwinds are beyond my understanding in any country. However, there is a Yamaha keyboard off to the side that immediately calls my name. I settle here as Igor plugs his bass into the sound system and fiddles with nobs. I acquaint myself for all of two minutes with the keyboard’s specifics and then I’m ready to go.

Andrey opens that black bag and inside is a trumpet, smaller than normal and therefore highly portable. It has a full-bodied tone though and more than does the job. He plays a melodic run, the sax follows suit, both warming up. The drummer doesn’t need any preliminary calisthenics because he’s already been in this room for two hours—with another group. Andrey calls our attention, gives some brief instructions in Russian that I generally understand, and then we begin. Perhaps, Igor and I—for that matter, the saxophonist and drummer and I also—can’t communicate with words, but how do you suppose we get along on our separate instruments? Well, let’s just say, here at last is the real introduction.

Very nice to meet you. Where are you from? I live…

Oh, that’s interesting. I had a friend from there, and she was also a…

Yes, I think I might know her. You see, there’s this open market where I remember…

After one extended improvisation, we become comfortably acquainted with each other—better than if we had used ordinary, everyday language. If a picture is worth a thousand words, one jazz composition played together is worth a hundred conversations. And by the end of that first tune, we all have new lenses, new understanding of each other. It’s then I realize, Russians and American musicians can get along and quite well at that. Igor’s happy. I am happy. His English is even suddenly better. And so is my Russian. Incredible.

By the end of the three-hour rehearsal, we’re all closer than family. Seems impossible, I know. But it’s true. These guys, I discover through the music, are fantastic human beings, and I dig their style. They dig mine too. End of story. Almost. We still have the gig. 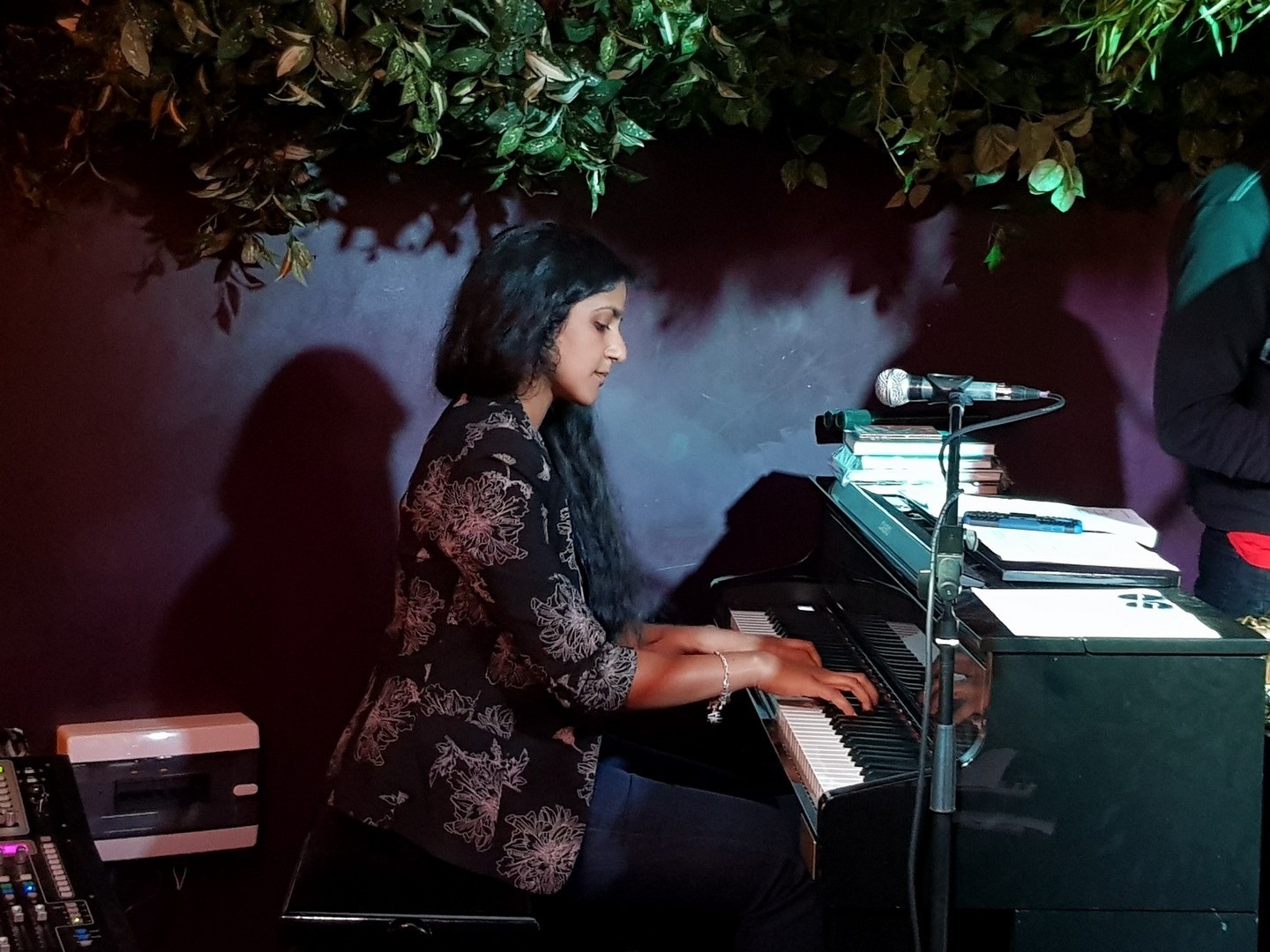 I marvel that I’ve never really paid much attention to this amalgamating property of music until coming to Russia. But it’s obvious why: I’ve never been in an environment where my language wasn’t the audience’s language and vice versa. I’ve never had to think about how to connect with people I didn’t understand and who didn’t understand me. I’ve never had to think about music functioning as anything other than entertainment. But here, tonight, I witness music towing the lines of communication and decimating pride, prejudice, and politics. Clearly, Duke Ellington and Irving Mills had it right when they wrote in 1931: “It don’t mean a thing, if it ain’t got that swing.” After all, any language is only noise until it speaks to someone. And music certainly seems to speak universally.