5 Russian drinking toasts for any occasion 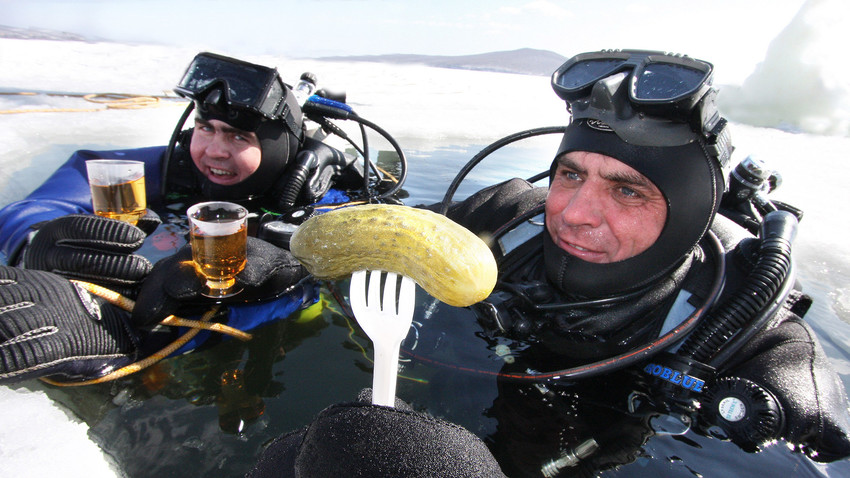 Vitaliy Ankov/Sputnik
Russians never drink without a reason - and always for something.

1. For occasion everyone gathered 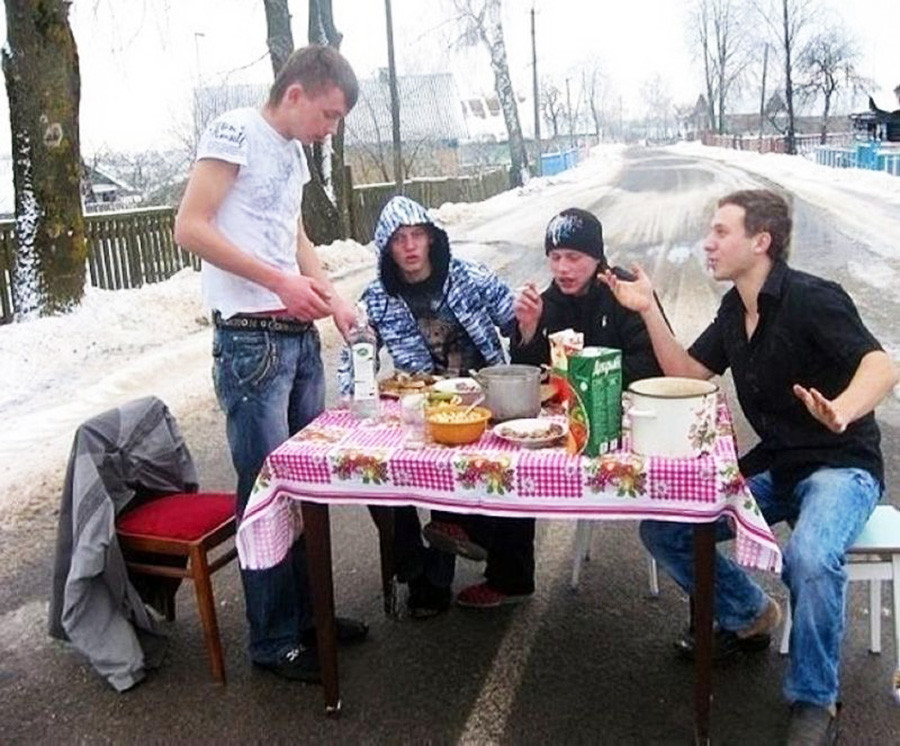 We Russians used to say “Where there is a reason WHY to drink, we always find WHAT to drink”. Some bars offer a special drinking calendar where every day is celebrating some occasion or holiday be it ‘professional day of locksmiths’, Slavic Kupala Night, or the commemoration of the first man in space - Yuri Gagarin..

However, for sure the most important reasons people gather to drink is birthday parties and official holidays (here you can find a list of the major holidays Russians celebrate)

If it's a birthday party, then the first toast is always pronounced in honor of the person whose birthday it is;  if it's a wedding - for the married couple. Usually it is the person’s closest friend who is called upon to raise their glass and make the toast.

Of course you need to wish this person all the best and remember a story of how you met or some other funny story, And finally you have to say how great they are - and don’t forget to mention all their best features. And admit how much they influenced you and how much joy they’ve  brought you (‘even if they are an utter b*stard’).

2. For parents and health

A Russian proverb asserts: ‘No long break between the first and second shots’. So prepare to drink again. Second toast glasses are usually raised for parents and grandparents, if they are alive. Russians wish them long life and health and thank them for everything they’ve done for their kids and for the fact they are alive and with them (even if they are not drinking with them at the moment).

A separate toast should honor those parents that have already passed on - and everyone should drink without clinking glasses.

Actually toasting at funerals is similar in many ways those at birthdays - everyone is praising one man but drinking without clinking. (And after several shots start bringing to mind funny stories about the deceased ones).

NB: Russians DO NOT say ‘Na zdorovye’ while drinking. But what they say is ‘Za zdorovye’ - as “For health” - and this is a toast. (Read more about what Russians say instead of ‘cheers’) 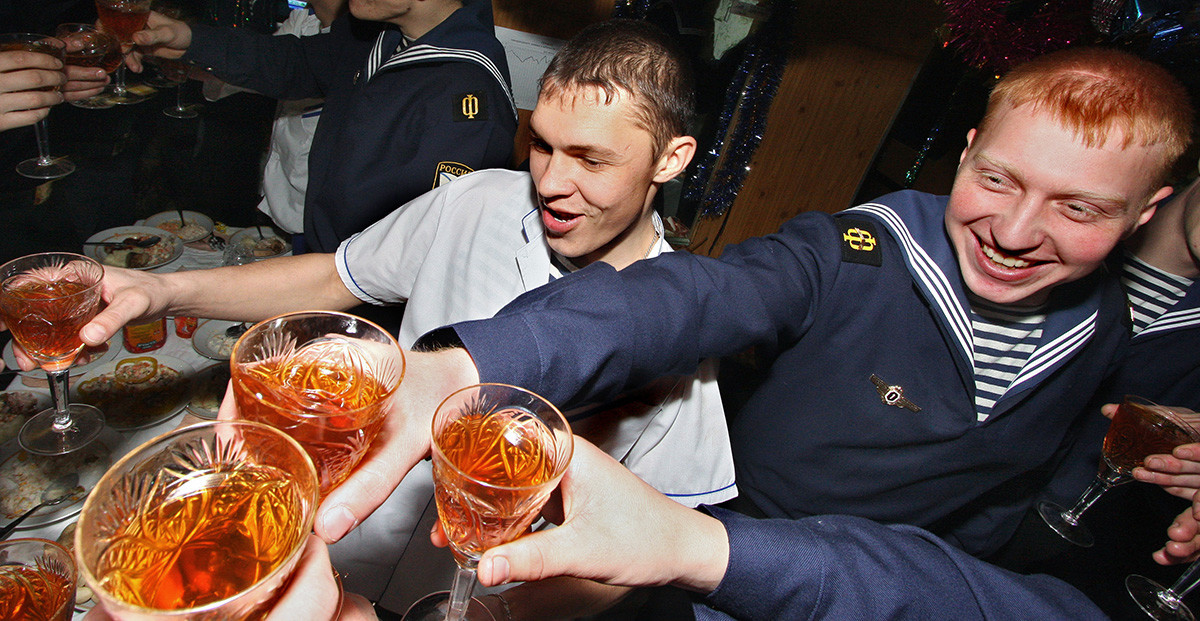 The third toast is a matter of honor for all men. Usually they stand up for this, showing their respect and love for women. However, if there are no women present, it’s still a nice thing to drink for them, because “if not women, we wouldn’t achieve anything and wouldn’t become the person we are”.

Women should drink the whole glass up to the bottom - that’s the rule! This way they are showing respect to men drinking for them standing!

Another frequent thing for the third toast is a hearty cheer. “Two short and one long - hoorah, hoorah, hooraaaaah”. This tradition is referred to officers’ drinking, as ‘hoorah’ used to be a war cry. However, Russians say that there is not such a thing as a ‘former’ officer - and in the Soviet Union there were military people in every family - so the tradition still has strong roots.

“During all the centuries in Russia, the fourth toast is for a man,” this is a folk proverb and women’s reply to brave officers toasting for them.

Usually women are very pleased by this kind of male attention. These toasts are especially beloved during two holidays - February 23, the Defenders of the Fatherland Day, and March 8, International Women’s Day.

Long-held traditions should not be bothered by modern day notions of feminism and gender equality stuff; there are very few women in Russia who won’t be pleased to get flowers or a toast in their honor.

And don’t forget - they could already be, shall we say, a little relaxed when three shots have already been taken (and the third one drank until the end) 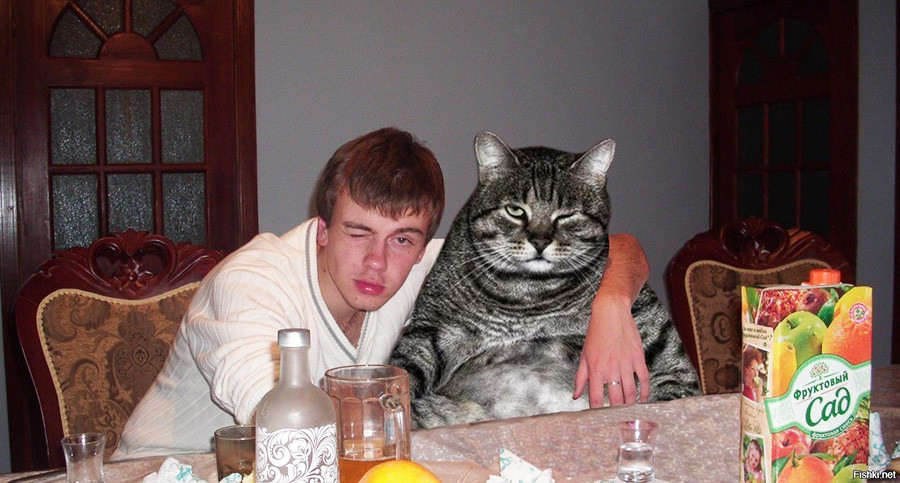 From the fifth toast it’s already a field for fantasy what you're gonna drink to. If you are at a birthday, then everyone should toast in honor of the main guest one by one. And you should keep in mind what everyone is saying during their toast, because when it’s your turn you shouldn’t repeat what has already been said.

But when the occasion of drinking is not so strict, there are many options for the fifth toast. It could be ‘we haven’t seen each other for a long time, so let’s drink to our meeting’ or ‘we are meeting so often, let’s drink to our strong friendship’ or ‘let’s drink to how cool we are, no matter how often we meet’.

Russians always drink with friends. Whether it is: ‘Let’s go drink’ or ‘Let’s go get drunk’ it is a sign of the deepest love to a friend. This means you will not only relax together and have fun, but also have soul conversations, discuss problems and finally politics…

But…. when a Russian drinks with a stranger (on a long night train journey or alone in a bar), or if there is a person in the company that he doesn’t like much… well, for the moment of this fifth toast they are already friends! And it’s logical to drink for their newborn friendship.

BONUS - A shot to go

After several toasts and eating during the breaks, and when you’ve already eaten your dessert and had an espresso or tea with it - and when everyone is already standing up to leave… it’s time to drink ‘na pososhok’. This toast doesn’t mean anything deeply philosophical, it’s just ‘a shot to go’. No one can leave without drinking to go! Because… we don’t know for ourselves, but it’s a tradition. Probably we believe that it helps you to get home successfully.

Oh - by the way, there is another secret toast which is called ‘shtrafnaya’ - a ‘penal’ shot. This way a person who arrived late for the party asks for forgiveness and tries to overtake the level of friends’ drunkenness.