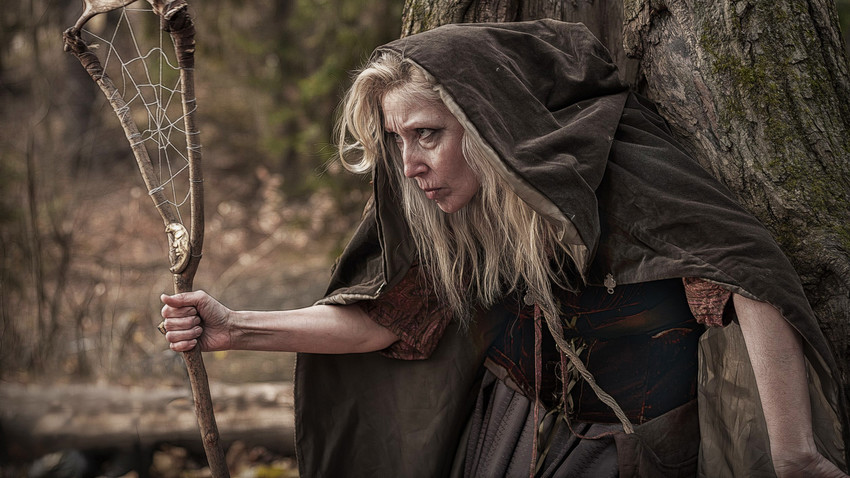 Viktor Pletenskoy/"Nedetskie Skazki", by Anna Costa
A sorceress from the woods, a steampunk protagonist, a Scottish highborn - Marina Badyanova from Saint Petersburg can pull off any look, proving that fantasy and art do not age, ever!

It all started with her daughters and nieces, who developed a passion for themed photoshoots. Marina would create costumes for them raiding her own closets, second-hand shops and flea markets. To her, that was a cakewalk of a job. “Dressing up girls is the same as dressing dolls,” she told KP.

The girls then grew out of the hobby, but Marina’s enthusiasm didn’t fade a bit - she kept surfing the net for inspiration, studying models and making fancy costumes just for fun. One day a photographer asked her to come to a shoot - and she immediately turned heads.

“When I came, photographers dropped all the beauties in their synthetic low-cut dresses and chased an old broad...”, she told 360TV. Marina recalls her grand debut. The theme was “no children’s fairy tales” - meaning tales where the Evil Queen can get to marry the prince and the Big Bad Wolf can dine on the Red Riding Hood without the hunters coming to ruin it.

So Marina improvised a perfect sorceress from the woods - wild-haired, in shabby clothes, carrying a cane and a basket full of herbs - the kind that might give you a piece of her wisdom just as easy as a poison apple. Somehow, her tattered cloak and second-hand corsage put her right into the limelight.

Ever since, she’s been an avid participant and organizer of similar outdoor photo shoots. A Greek goddess, a Scottish noblewoman, a steampunk femme fatale, even an elf queen - her imagination runs wild and there’s almost no limit to her variety of characters.

“I like fantasy looks, but feel at ease with something more morden, too“ she said in an interview with Russia Beyond. “I like all genres except boring.”

Indeed, her photo sessions are anything but. To mark International Women’s Day, Marina took part in a staged suffragette march where she protested, brandished the famed “Votes For Women” newspaper and brawled with some sharp-dressed cylinder-wearing gentlemen. And when her friend needed “ to do homework” for a photography course, they just found a pack of corgis and pulled a royal shoot in roughly an hour - talk about pro modeling.

The inspiration, Marina says, comes from little things she sees at flea markets and such. A peculiar brooch, a Victorian hat or just some old cloth can catch her eye, get ideas flowing, and, before long, she’s got a character born in her mind. The rest is easy - google dress designs, watch a sewing tutorial or just improvise with pins on your own.

“I pick details of a certain era and design my costumes in that style,” Marina says. “So I get bold impromptu outfits, but historical reenactors would laugh at me”.

Looking at her handcrafted, incredibly detailed dresses, it’s hard to imagine she’d never attended as much as a sewing workshop before becoming this self-made designer-slash-model. In fact, Marina had worked in a metro construction company her whole life - which is probably as far from the artsy trendy crowds as it gets.

And yet, she’s somewhat a celebrity in those circles now, known for creating colourful, dramatic characters that look as if they just stepped off the pages of a fairy tale. Marina admits, though, she’d played in a mime theatre “at the dawn of her youth” for 3 whole years so she wasn’t a complete stranger to the artistic world. Now, she says, that craft helps her bring life to the many personas that she takes on.

Five years into this hobby, she’s a local cosplay icon - even though she wouldn’t apply the term to herself. Despite the success, she doesn’t have any grand plans about her “career” - to her it’s all about the joy of the process, the thrill of masquerading, the creative drive. “That’s how I have fun in my retirement,” she tells KP.

Besides, Marina explains, she’s a busy grandma of five, so there’s not too much time to venture in the woods in fancy clothes. Her family, though, fully support her passion, Daughters and grandkids often tune in for fun photo shoots and Marina’s husband lends a helping hand carrying lighting kits and other equipment.

“I am 57 and that’s wonderful. Being old is wonderful. If nothing else, it means you’ve lived long enough to experience it,” Marina says philosophically. But if there's one thing this buoyant Russian grandma proves, it’s that art and creativity do not really age.