The cause of the ecological disaster in Kamchatka 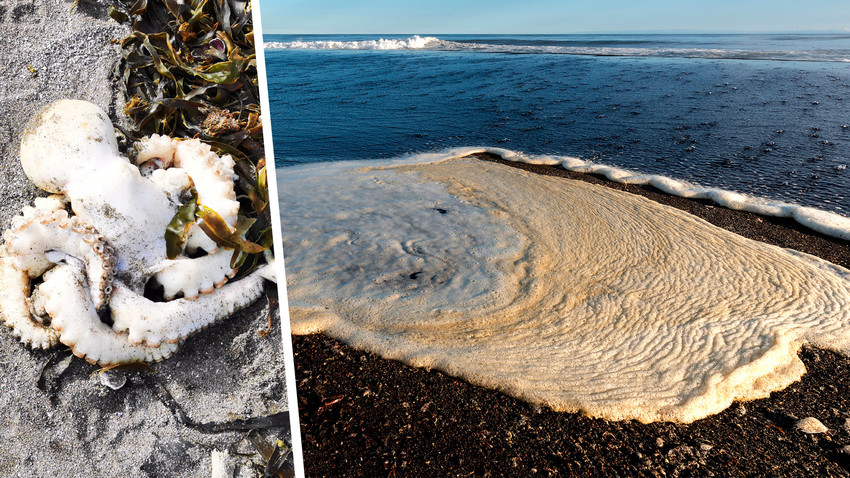 Alexander Piragis; Anna Strelchenko/TASS /Sputnik
Scientists and experts have found an explanation for the mass destruction of the micro-ecosystem and toxic exposure to humans in the Pacific Ocean. It’s all to do with deadly algae.

The news story of the pollution in the Pacific Ocean off the shores of Kamchatka caused an outcry in mid-September 2020, after surfers complained of burning eyes, nausea and poisoning. At the same time, on Kamchatka’s “showpiece” Khalaktyrsky Beach, locals started finding the remains of hundreds of dead sea animals and molluscs and Greenpeace recorded slicks of an unknown origin floating in the water off the coast, as well as a yellow foam - and all of this was not just on the surface, but also underwater. 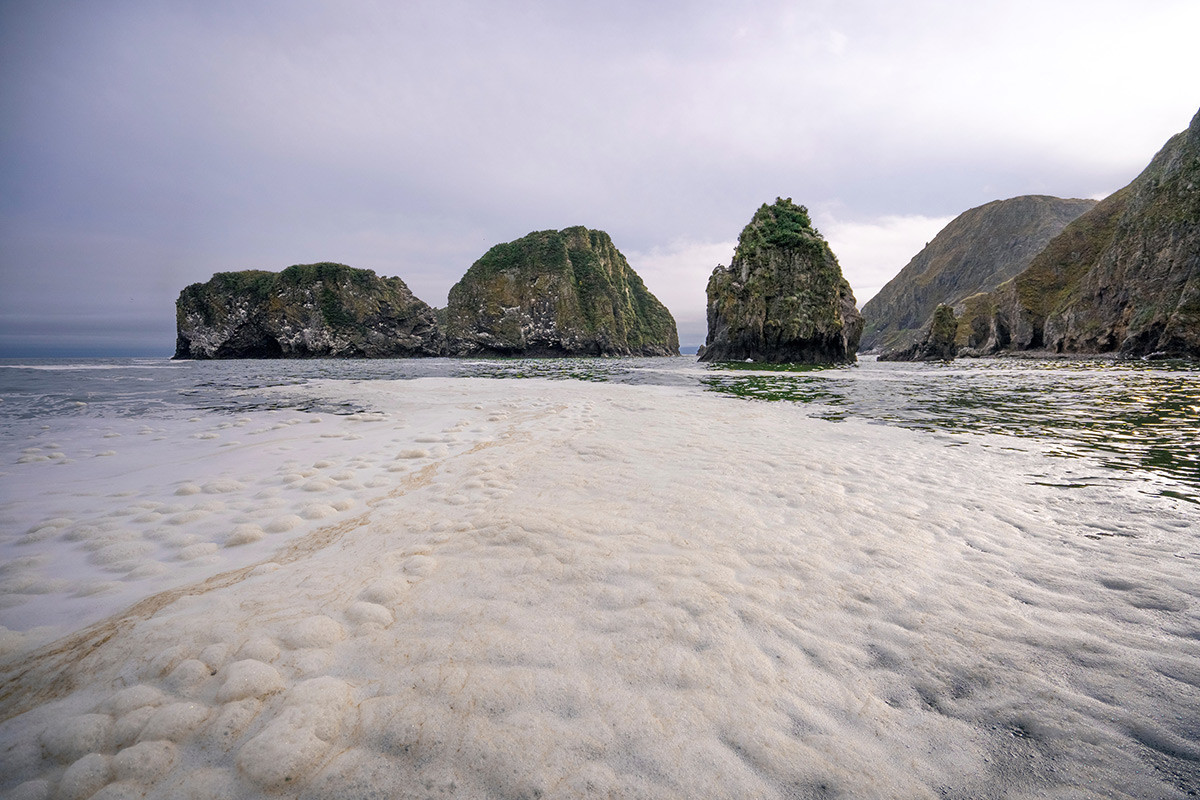 There were several theories to explain what exactly had got into the ocean and literally started poisoning it. On satellite pictures, signs of pollution could be observed as far back as September 9, with it seemingly originating near a toxic chemical waste facility.

Read more: What’s behind the recent ecological disaster in Kamchatka?

Now, after samples have been taken and numerous inspections carried out, it is officially believed that the cause of what happened is clear. For non-specialists, though, the explanation hasn’t turned out to be the most obvious one.

Neither toxic chemicals nor rocket fuel nor petrochemicals

Scientists at the Russian Academy of Sciences (RAN) have ruled out chemical pollution as the cause. “Little by little, as a result of the tests that have been carried out, the theory of a man-made cause of the disaster has fallen by the wayside, because studies carried out both by our research units and in the laboratories of Rosprirodnadzor [Federal Service for Supervision of Natural Resources] and Rospotrebnadzor [Federal Service for Surveillance on Consumer Rights Protection and Human Wellbeing] show rather similar results - i.e. the absence of significantly raised levels of any chemical substances that could have posed a danger,” says RAN Vice President Andrei Adrianov. 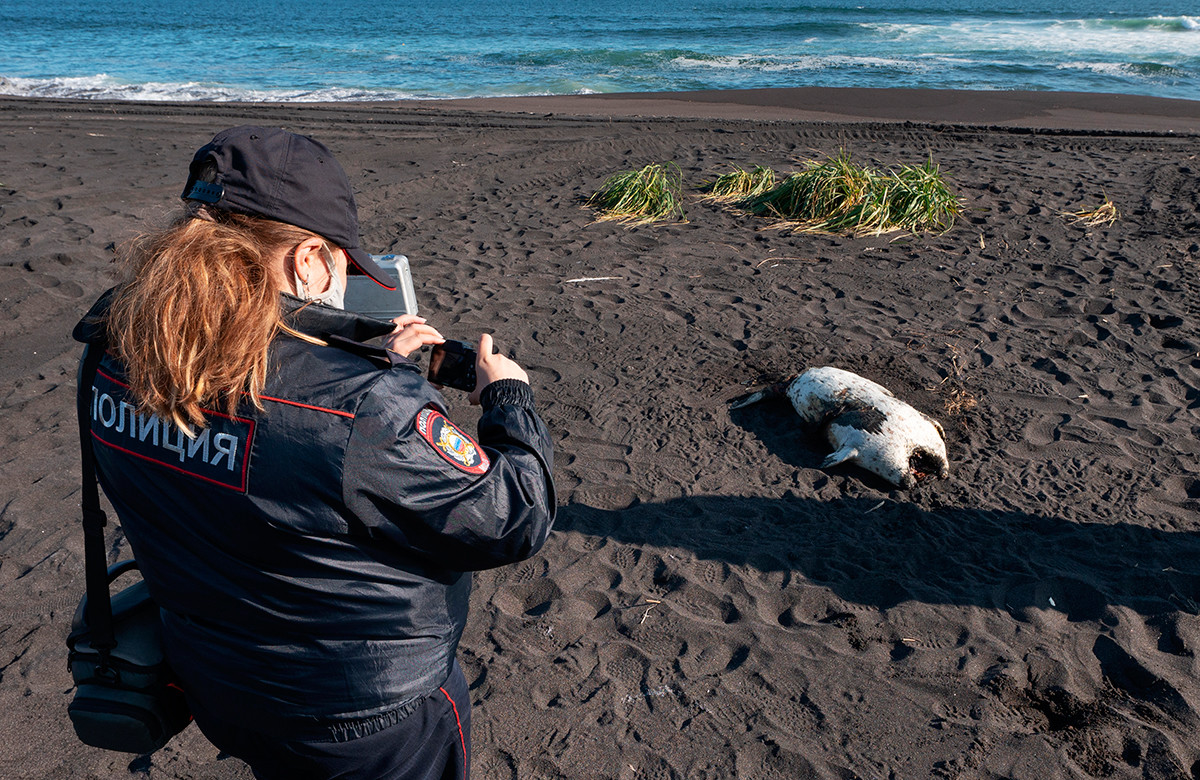 At the same time, the samples revealed that, in some cases, petroleum hydrocarbons, phenols, iron and other substances associated with oil processing were many times above normal limits. But, according to Adrianov, the increased presence of these substances “certainly could not have provoked the mass deaths of aquatic organisms observed in Kamchatka”. 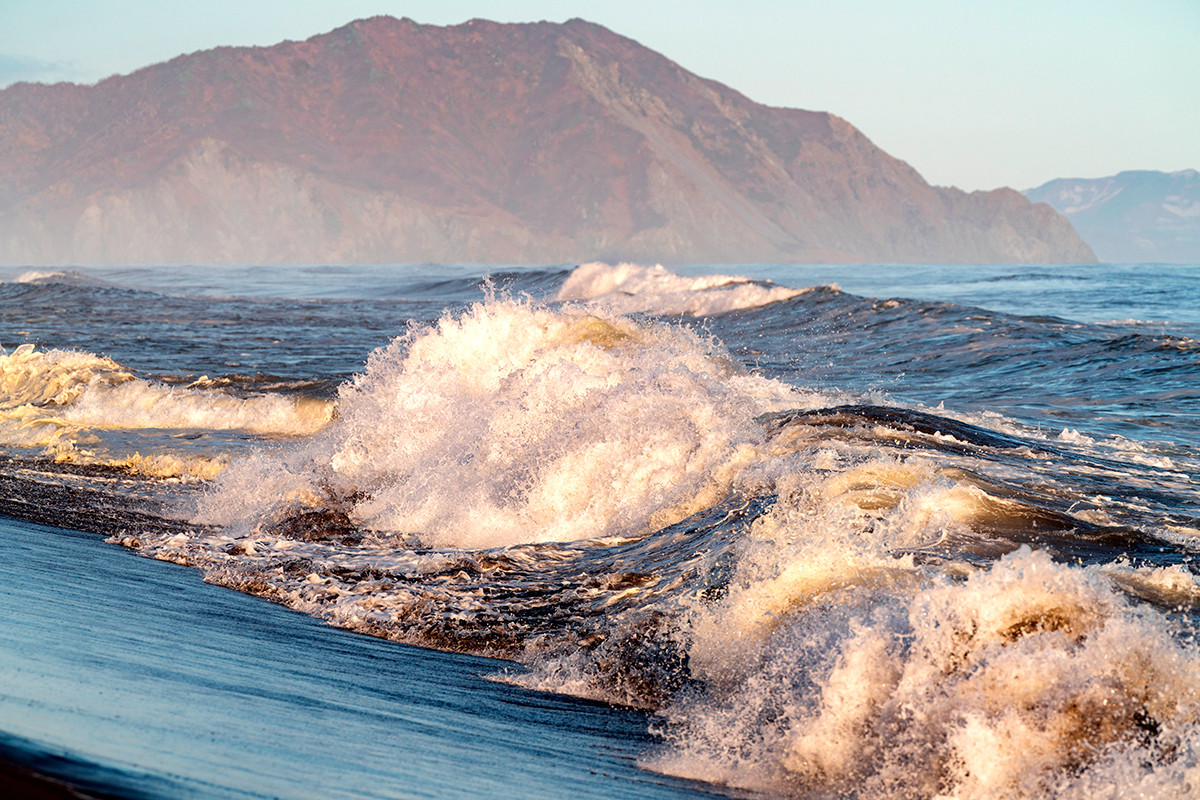 There has been confirmation neither of the suggestion that the pollution was caused by a discharge of the highly toxic rocket fuel called ‘heptyl’ from the Radygino test site (as corroborated in early October by Greenpeace, among others, on the basis of samples taken), nor of the theory of radioactive pollution as a result of a leak from the Kozelsk waste facility, nor of suspicions that seismic activity or waste discharge from a passing ship could have been the cause. The Far Eastern Federal University, which sent its own expedition to the scene of the incident, reached the same conclusions. Its Vice President, Dmitry Zemtsov, published a brief report on the expedition’s results on Facebook - like other academicians and regulatory agencies, the expedition reached the single most plausible conclusion.

Toxins - yes, but from algae

It was all caused by the natural phenomenon of “red tides” - this is now regarded as the official explanation. In scientific circles, it is the name given to the exceptionally rapid proliferation of microalgae, which produce poisonous toxins. In the Kamchatka incident, the toxins were released by algae of the genus Gymnodinium. “They are responsible for the production of a rather large number of various toxins. Curiously, they are toxins that affect invertebrates,” the Russian Academy of Sciences vice president said. 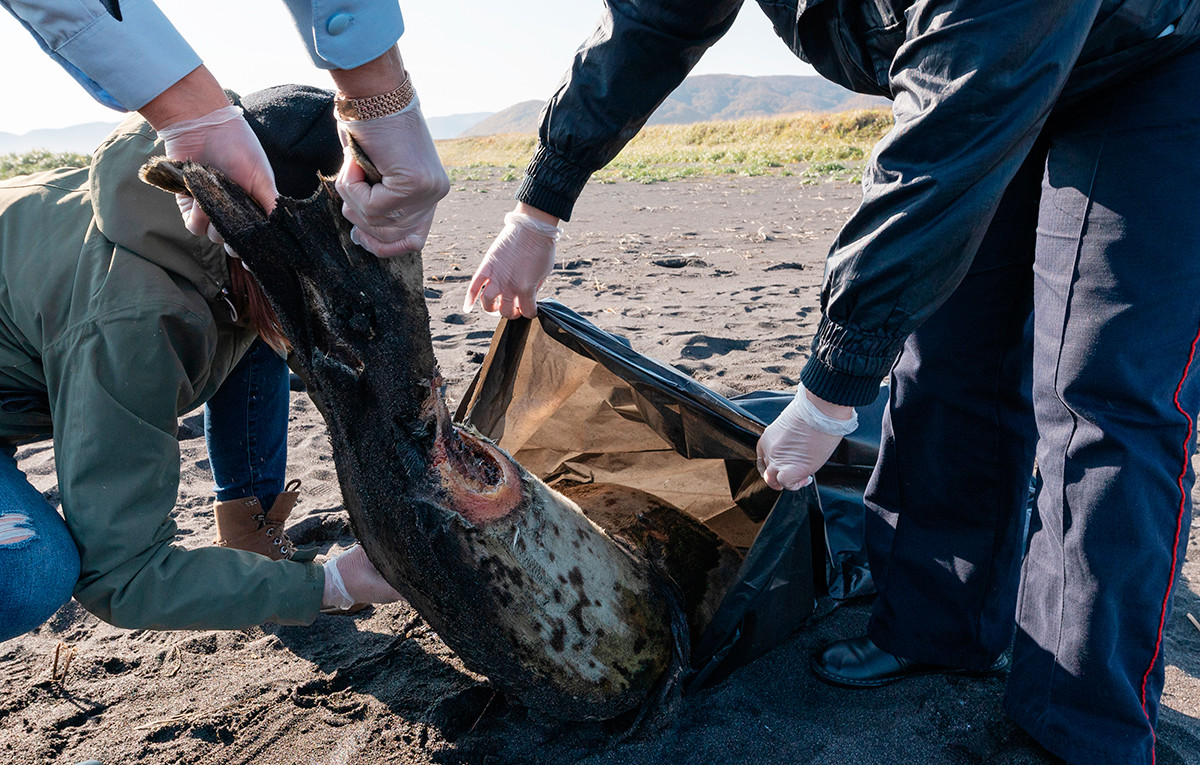 High concentrations of these toxins were detected in samples, and this supports such a hypothesis. What is more, the yellow foam is also characteristic of microalgal bloom and witnesses were complaining of just such a phenomenon.

This conclusion creates a lot of scepticism in people who had never heard of “red tides” until now. “I realize that an explanation like this sounds comical and seems more like fake news, but the more you learn and listen to what the scientists are saying, the more you realize that we really do know very little about the oceans,” was how Kamchatka Governor Vladimir Solodov commented on the findings.

Why did no-one issue a warning?

Because, in spite of the virulence of the phenomenon, “red tides” are not always noticed,  biologist Tatyana Orlova said in an interview with the Meduza news website. She has been studying “red tides” all her life.

“We observe ‘red tides’ in Kamchatka year in year out. There is nothing out-of-the-ordinary in what happened in Kamchatka. It is a global problem. This phenomenon is regularly encountered throughout the world,” she says. “But it is important to realize that it does not always prove possible to see, let alone register them, because the possibility that the current will deposit dead creatures on a populated shore is very small.” 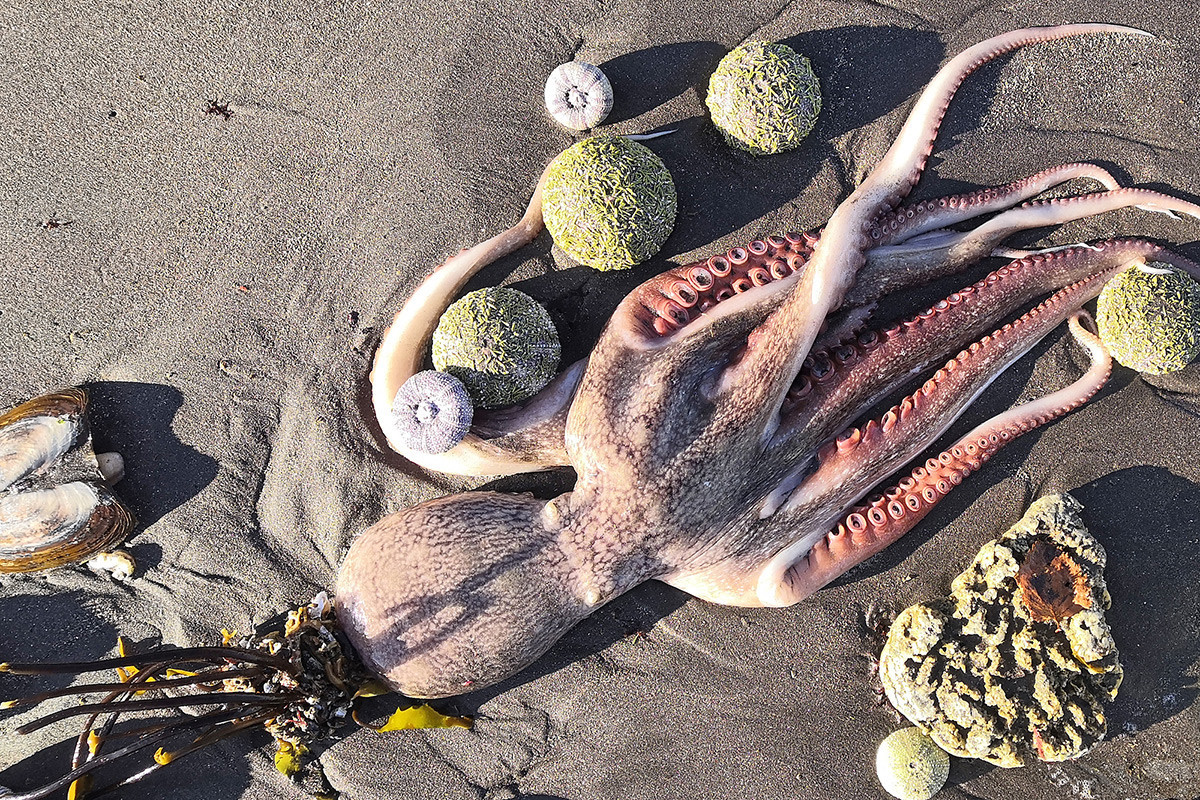 There is a lot of deserted shoreline along Kamchatka and were it not for the coincidence of the presence of surfers and a landward wind direction, the algal bloom would hardly have been noticed by anyone, let alone necessitating a warning to the public. The water does not always go red - far from it. According to Orlova, the bloom in Kamchatka this time was not so rampant as to be unequivocally detected through satellite pictures. Water samples had to be taken in order to identify it - and this is what happened after the microbiome was washed up on the shore.

At the same time, these microalgae are not dangerous per se and provide nutrition to every living thing in the ocean, comparable to grass on land. But, at a given moment, they can produce “a whole spectrum of nasty poisons and all possible toxins”. And they can also be fatal to humans, directly or indirectly.

“That is what happened in September 1945, when a crew landed on the shore of the Bering Sea and had mussels to eat. Six people died,” Orlova says. There was an algal bloom in the water, and the molluscs had absorbed the toxins. It is partly for this reason that seafood for human consumption has to pass mandatory certification.

Nevertheless, not everyone, even among the experts, believes in the theory of a “red tide” as the prime cause of the disaster. No toxins characteristic of “red tides” were discovered 10 km north of Khalaktyrsky Beach. “The contamination was thus a localized one and, even if the algae were to blame, they were most probably helped to proliferate by something - for instance, a leak of pesticides from the Kozelsk waste facility,” according to hydrogeologist and ecological scientist Georgy Kavanosyan.

“For instance, the pollution that everyone noticed could have been secondary, but what served as the primary pollutant and what set off the subsequent processes?” asks Greenpeace Russia climate project leader Vasily Yablokov. At the same time, Greenpeace has so far not detected any evidence of leaks from on-shore installations.

The World Wide Fund for Nature (WWF) also says that on present information it is impossible to reach an unequivocal conclusion: “No information has appeared to date to pinpoint a specific man-made pollutant or a particular natural toxin.”