The Simpsons get a new distinctively SOVIET look (PHOTOS) 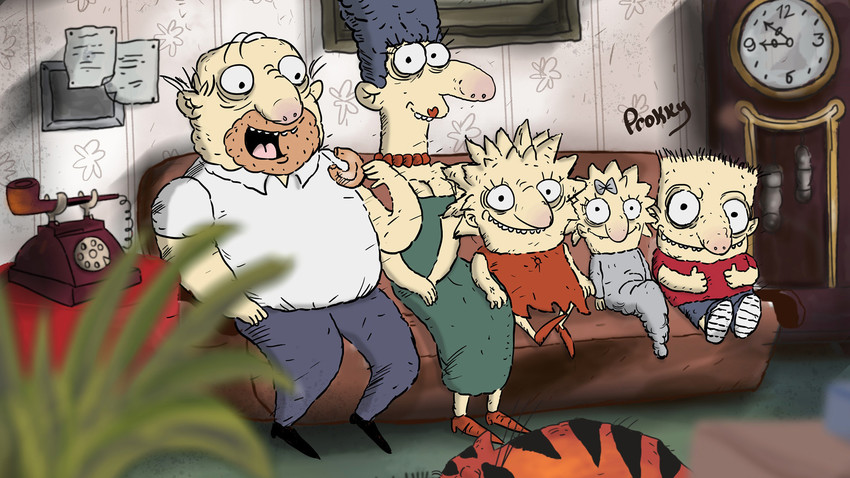 Prokopiy Ulyashov
A Russian artist drew the characters of the iconic animated series according to the styles of famous Soviet animators.

Amateur Russian artist Prokopiy Ulyashov, 27, reimagined The Simpsons and styled them as characters from famous Soviet animation series and cartoons.

“On December 17, 1989, the first half-hour episode of The Simpsons was released. I tried to imagine what the famous ‘sofa scene’ would look like in the personal style of some legendary Soviet animators. A small thread with pictures [is below],” tweeted Ulyashov on December 17, 2020. 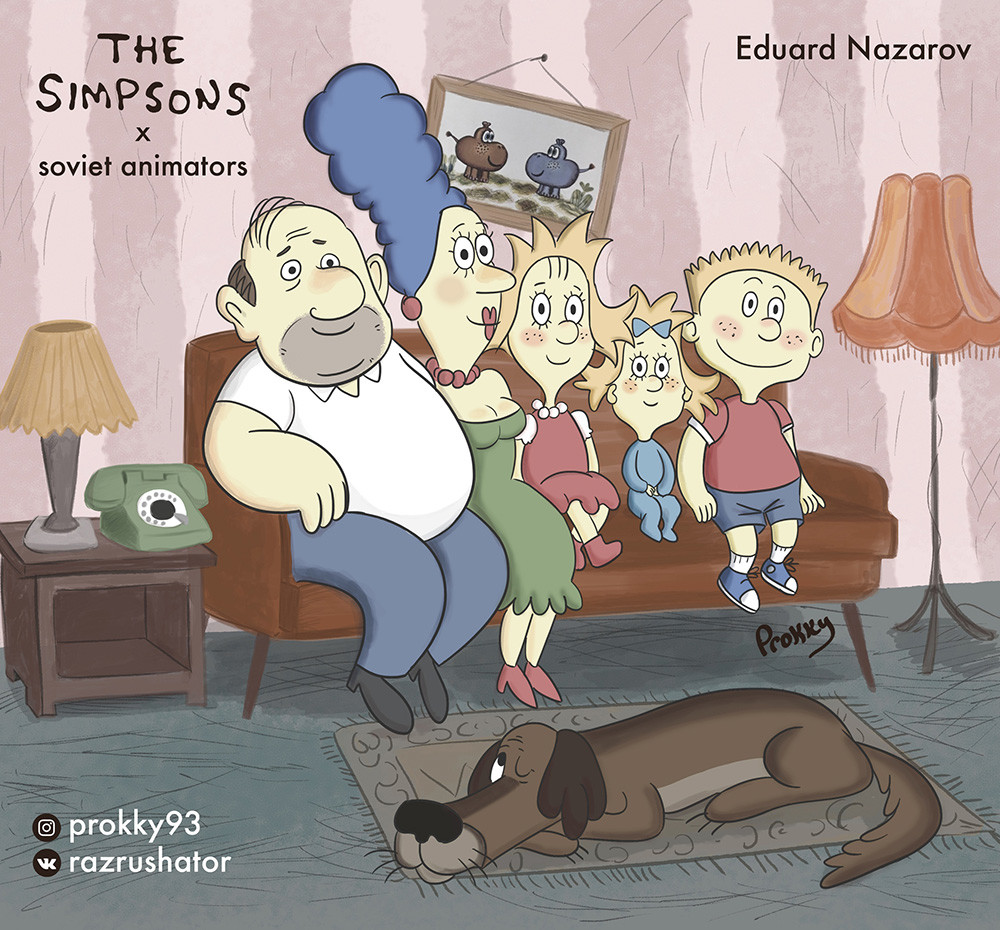 “The sofa scene of The Simpsons in the style of Eduard Nazarov (1941-2016), the author of the cartoons ‘Once Upon a Time There was a Dog’, ‘Martynko’, ‘The Princess and the Ogre’ and many others. Nazarov is definitely one of my favorite Russian animators.” 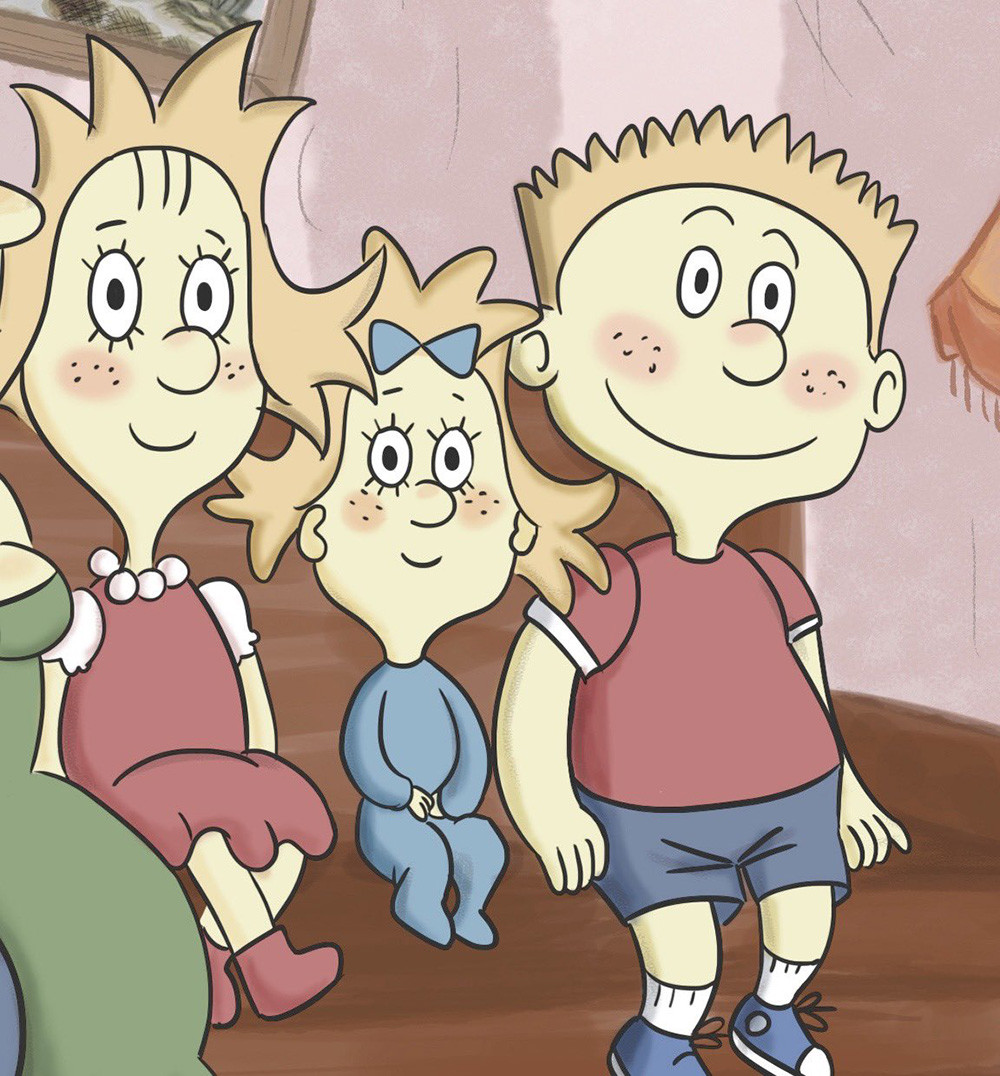 “Nazarov is mostly known as the creator of the wonderful movie ‘Once Upon a Time There was a Dog’. The nameless dog fits in well with the family instead of Santa’s Little helper, huh :)” 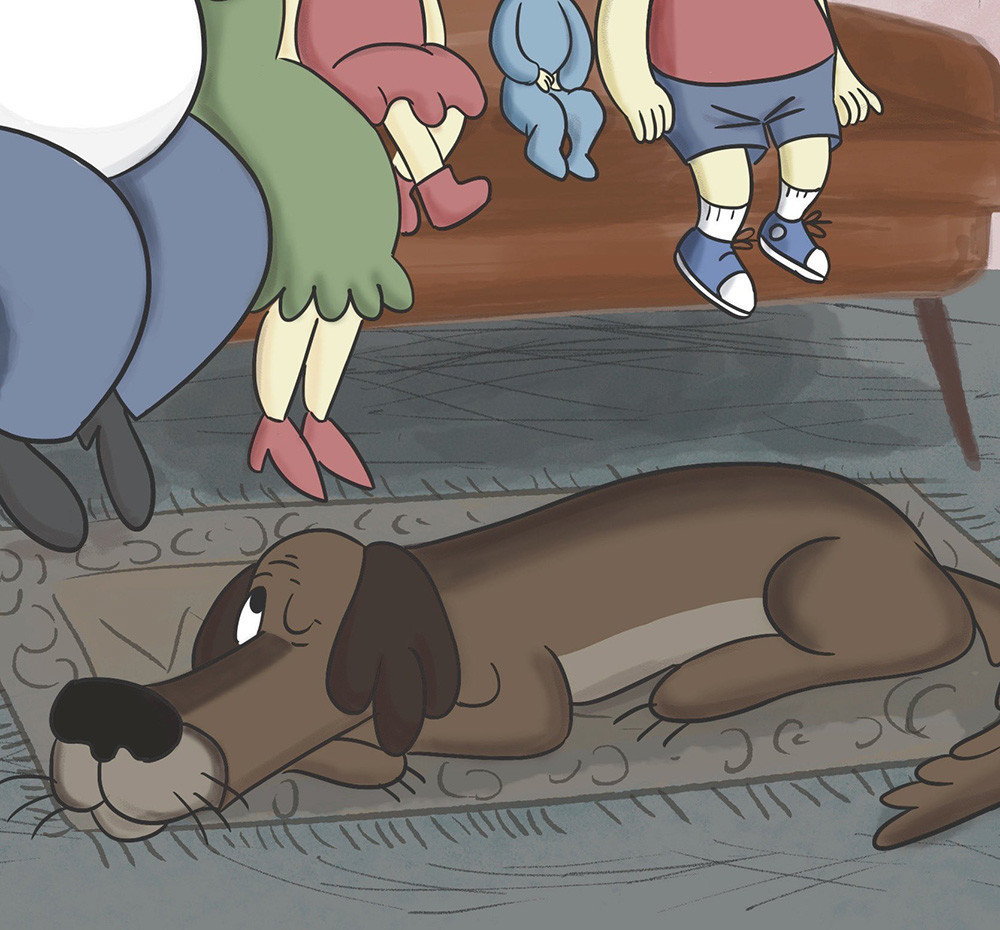 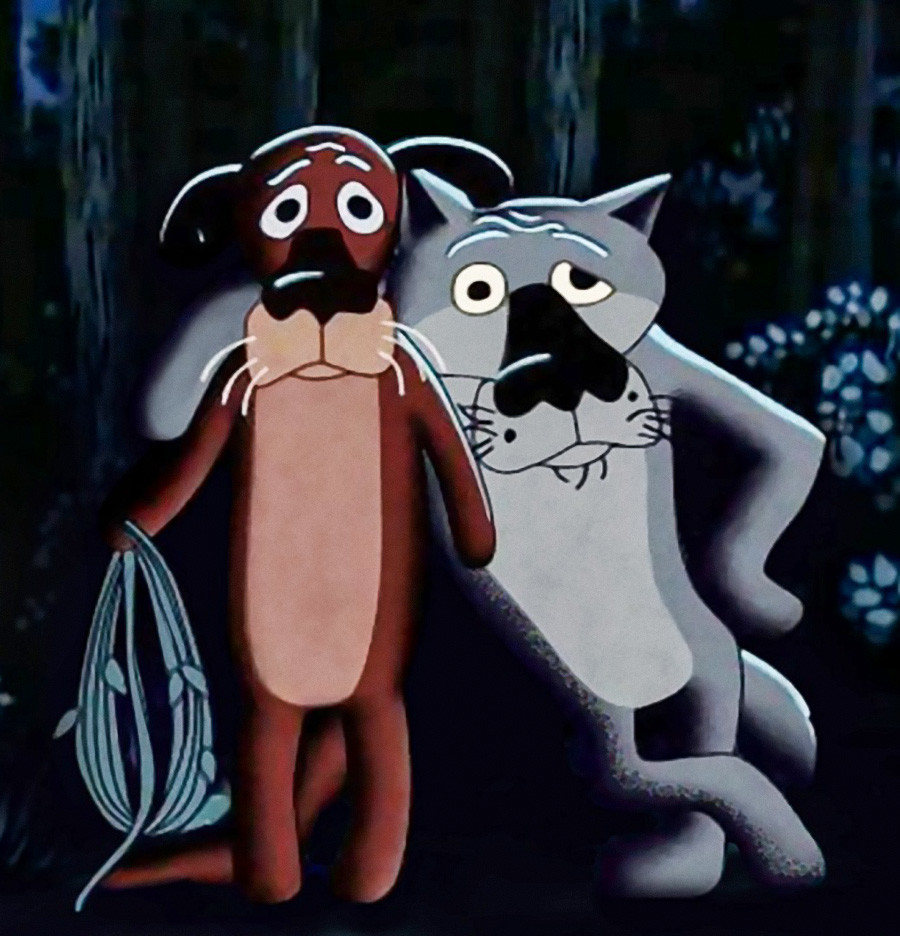 Once Upon a Time There was a Dog

“The Simpsons in the style of David Cherkassky (1931-2018), the author of the cartoons ‘Adventures of Captain Wrongel’, ‘Doctor Aibolit’, ‘Treasure Island’ and others.” 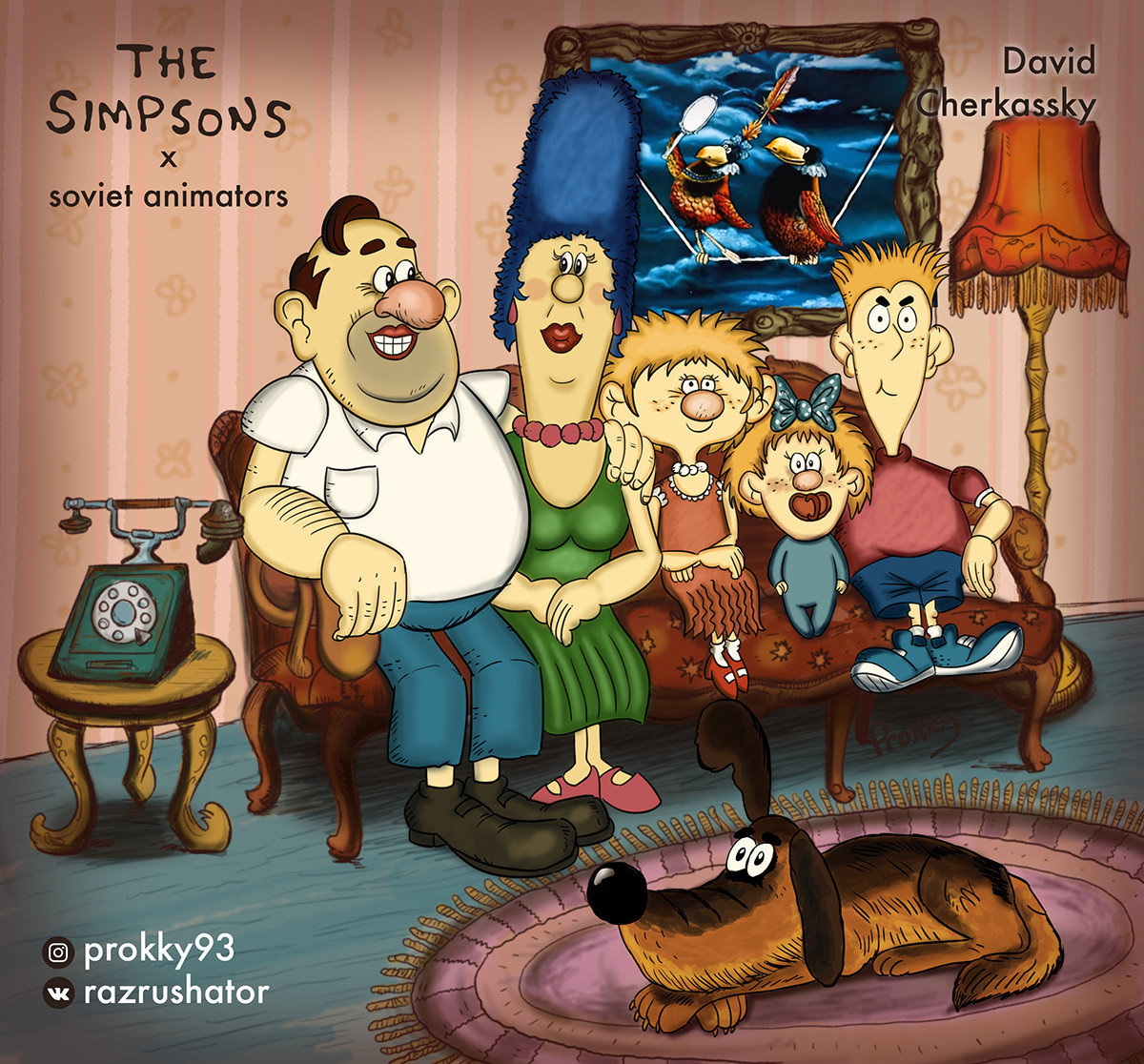 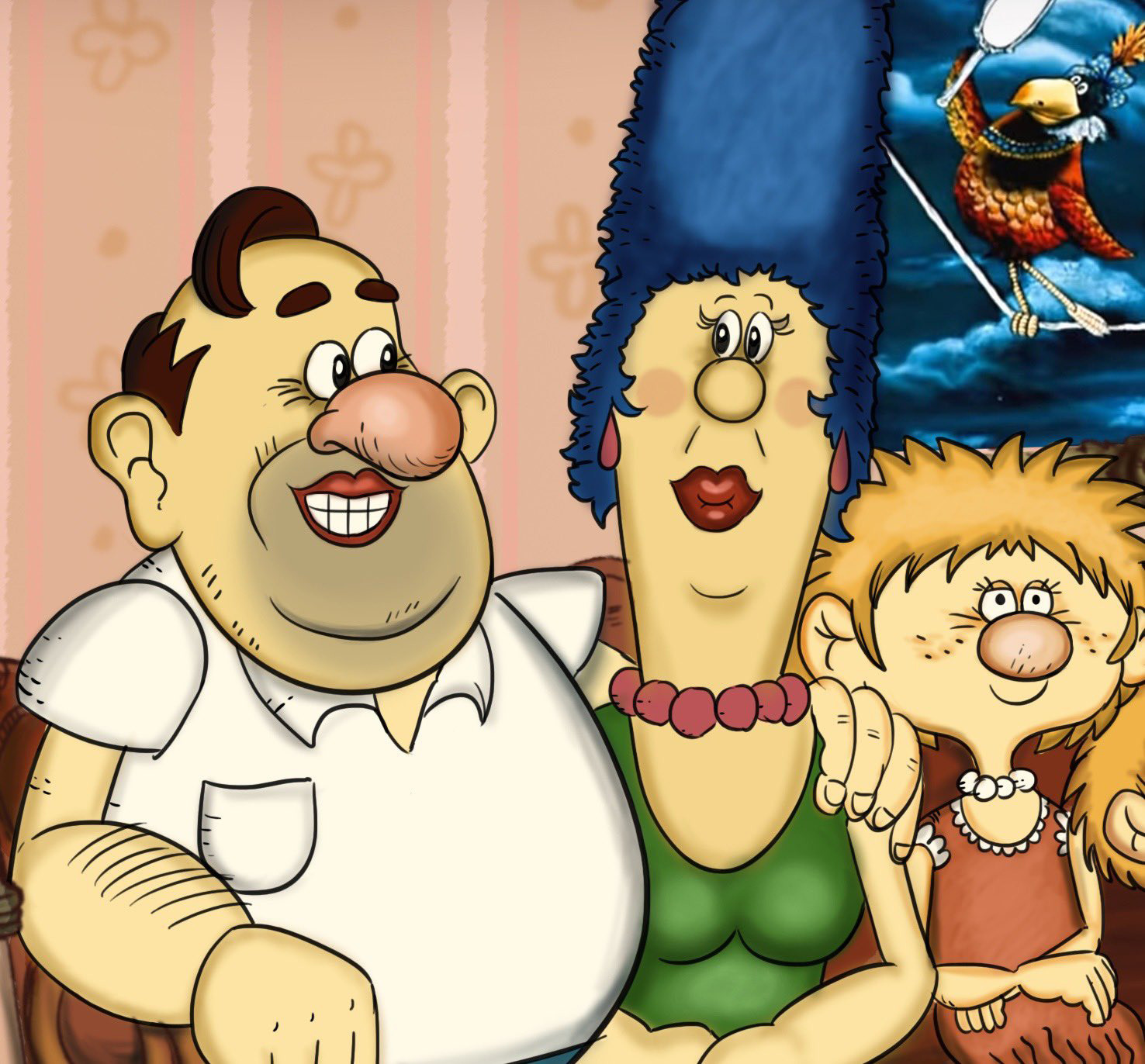 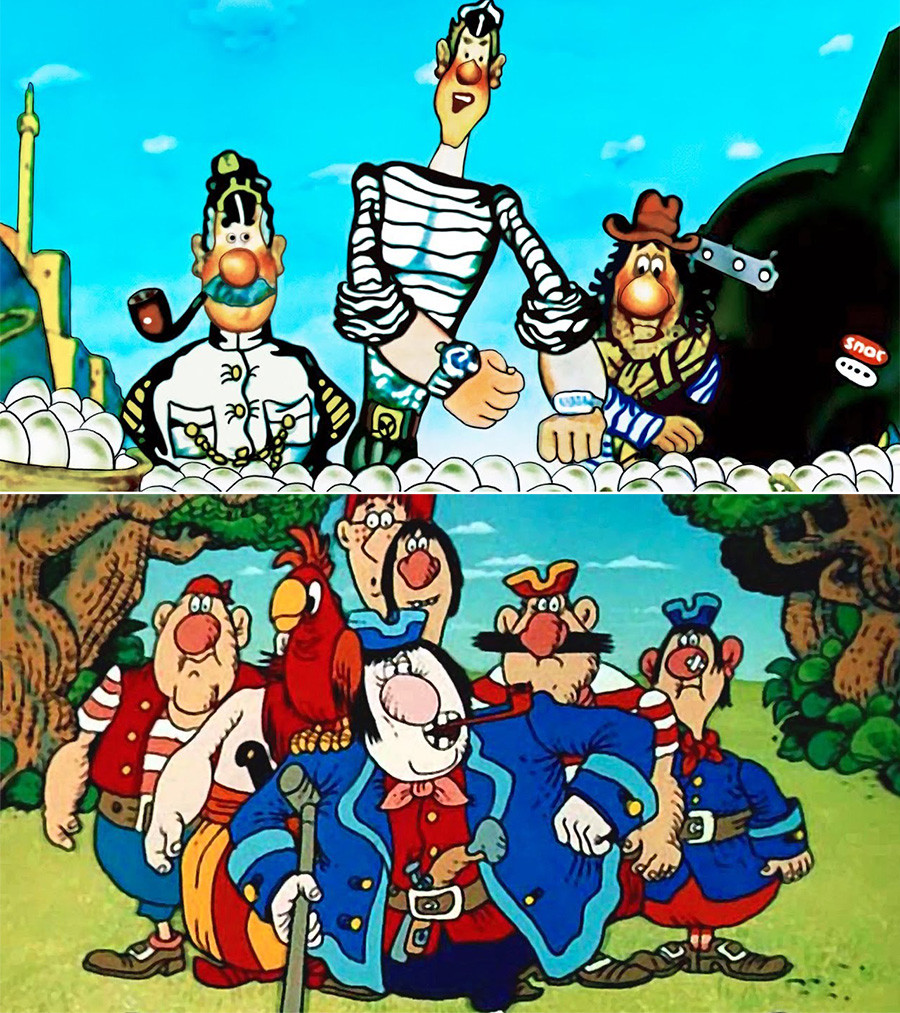 “It’s amazing that as a child, all these quirky-lipped and nosy characters did not repel [me] at all. I watched ‘Treasure Island’ for the first time when I was already an adult and I roared with laughter. It is a pity that due to lack of funding in the 1990s Cherkassky did not make any more films.” 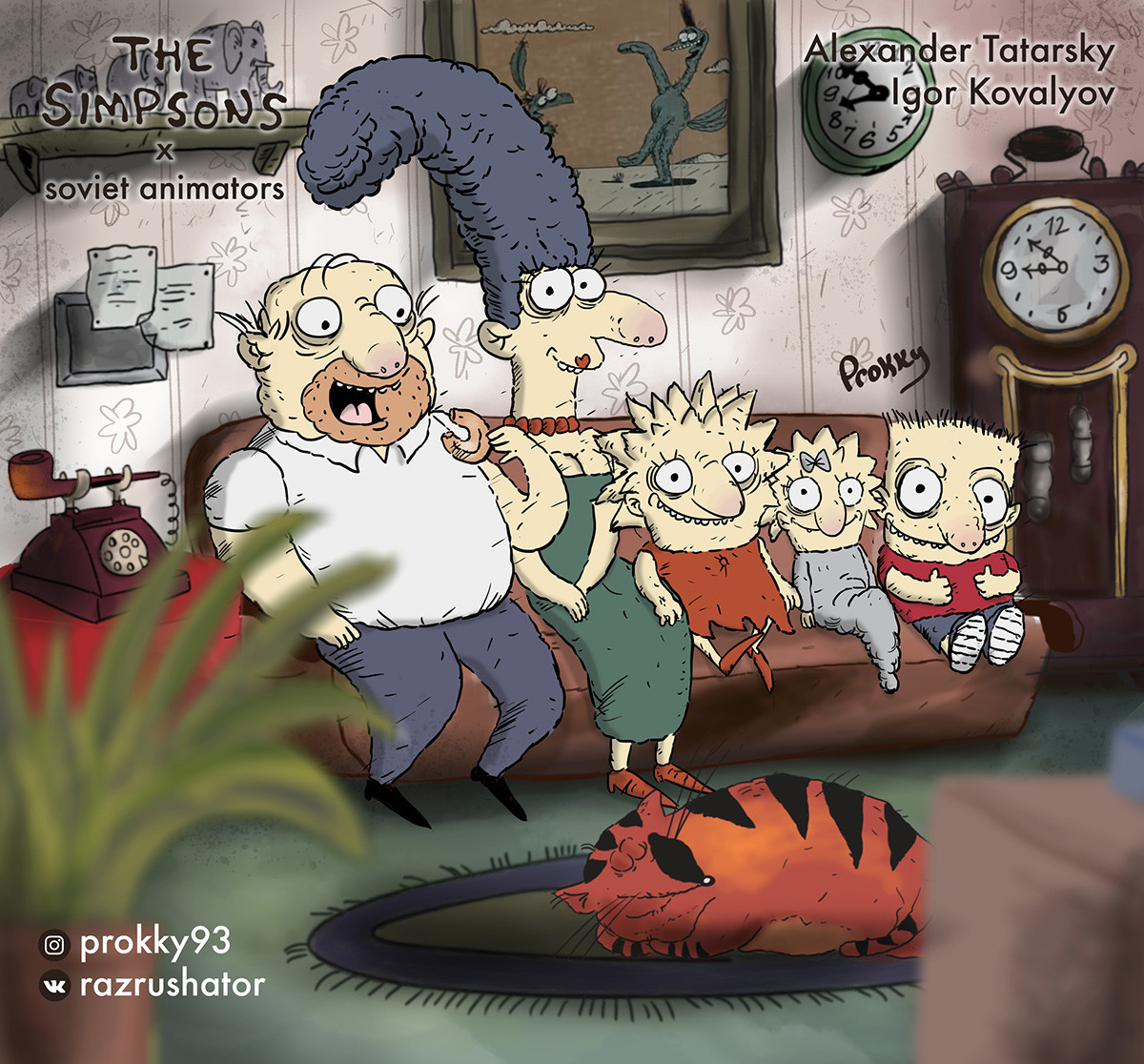 “Simpsons in the style of Alexander Tatarsky (1950-2007) and Igor Kovalev (born 1954), who created the cartoons ‘Plasticine Crow’, ‘Wings, Legs and Tails’, ‘The Investigation is Conducted by Koloboks’ and others.” 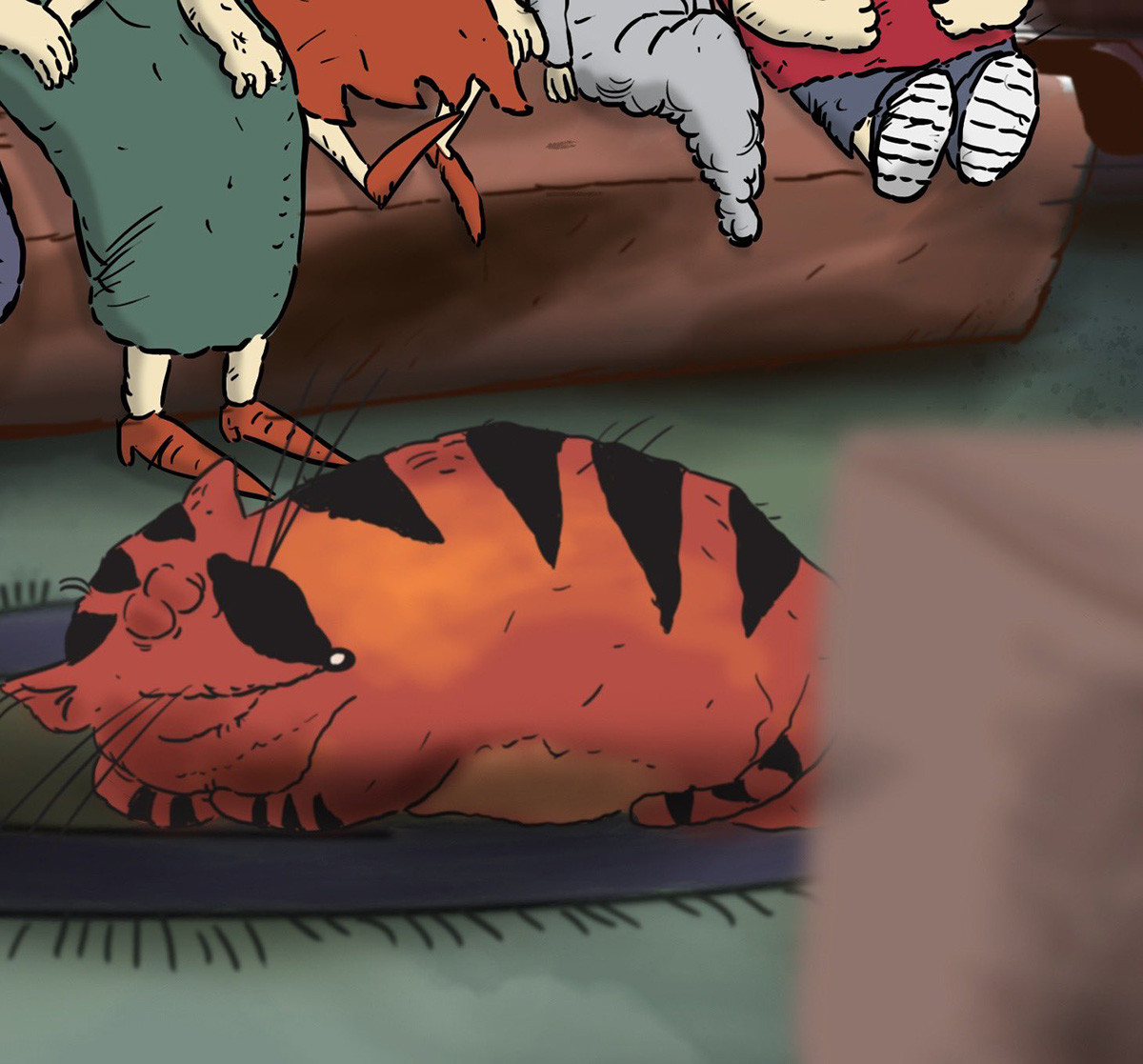 “Interestingly, Igor Kovalev went to work in the U.S. in the 1990s, where he worked at the Studio Clasky Csupo and became one of the creators of the ‘Rugrats’ series and ‘Aaahh!!! Real Monsters’ and also worked as an artist on the first seasons of The Simpsons.” 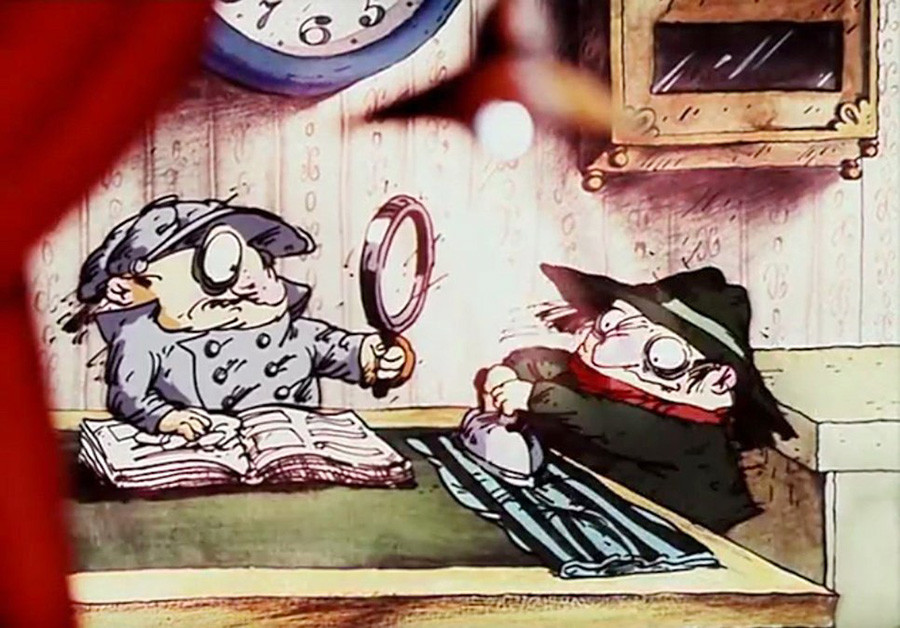 The Investigation is Conducted by Koloboks

The artist thinks U.S. citizens will not appreciate the experiment as much as those who grew up in post-Soviet countries and were exposed to the above-mentioned Soviet cartoons during their childhood.

For anyone who is unfamiliar with Soviet animation, Ulyashov recommends beginning with ‘Well, Just You Wait!’, ‘The Snow Queen’ and other classic Soviet cartoons. 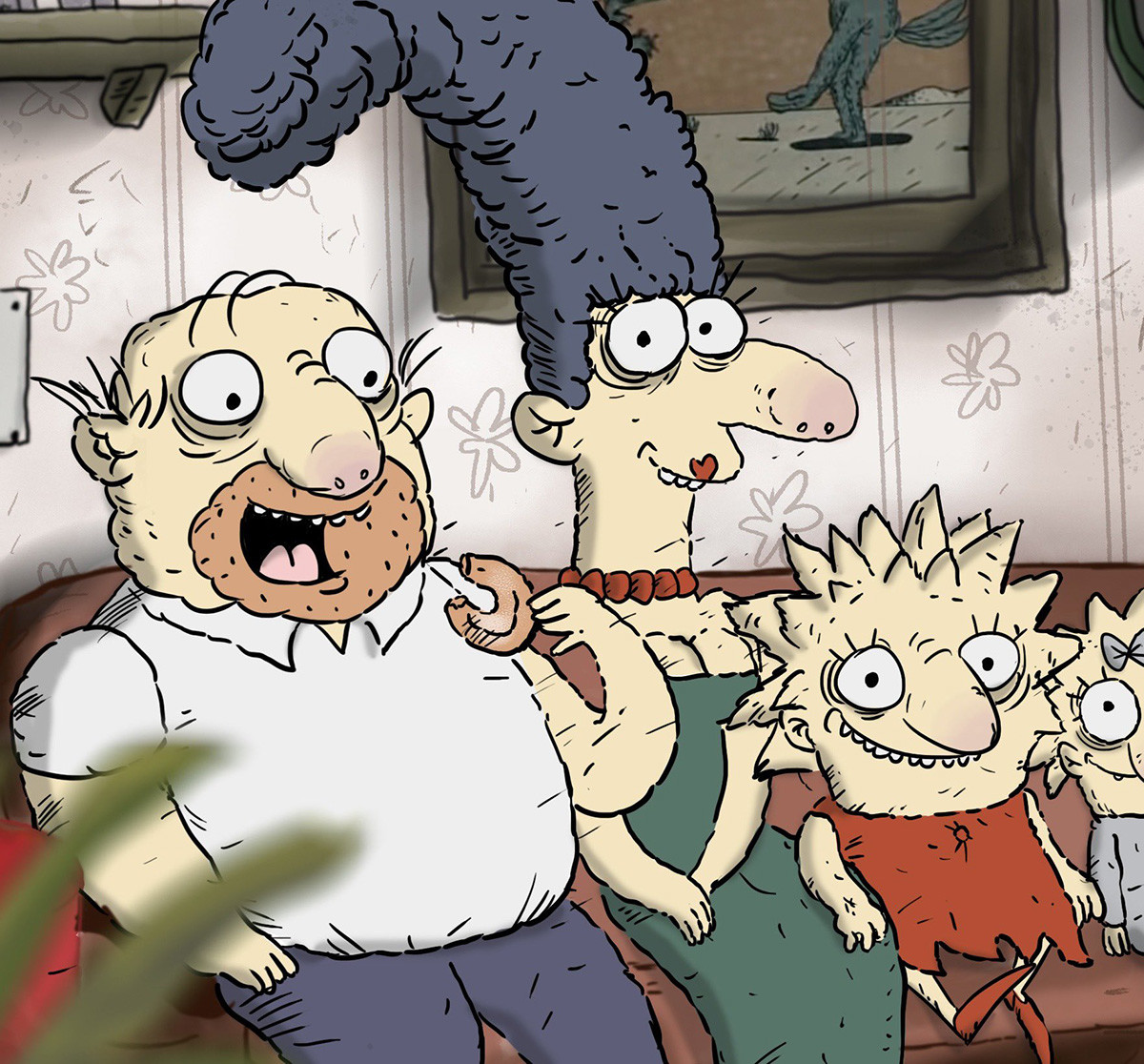 To inspiring artists, Ulyashov recommends never giving up on their passion and following their dreams. “Do not be afraid of trying and experimenting. It’s important to believe that someone out there needs your ideas. Eventually, there will be people who love what you do,” said Ulyashov.

Prokopiy works as a marketing specialist at Soyuzmultfilm, a Russian animation studio based in Moscow, so it was a perfect crossover for him.

Ulyashov says he always liked The Simpsons. He first saw the series in 2001 and has followed his favorite characters from then on.

“I'm a dedicated fan of The Simpsons. I collect merch, watch every episode of the show,” said Ulyashov.

Although The Simpsons primarily explore the American lifestyle, Ulyashov believes the themes it explores are universal.

“I was surprised to see so much attention to the project, as the days of glory for the series are in the past. Yet, it continues and remains popular, because it is universal. The themes it reflects on - family values, life in a city, different characters - are universal and everyone can relate,” says the artist on the continued widespread popularity of The Simpsons.

Concluding the thread with his images, the artist encouraged readers to follow his Instagram account where he occasionally posts famous animated characters in rather unusual guises.

Click here for 10 Soviet animated movies you need to watch.