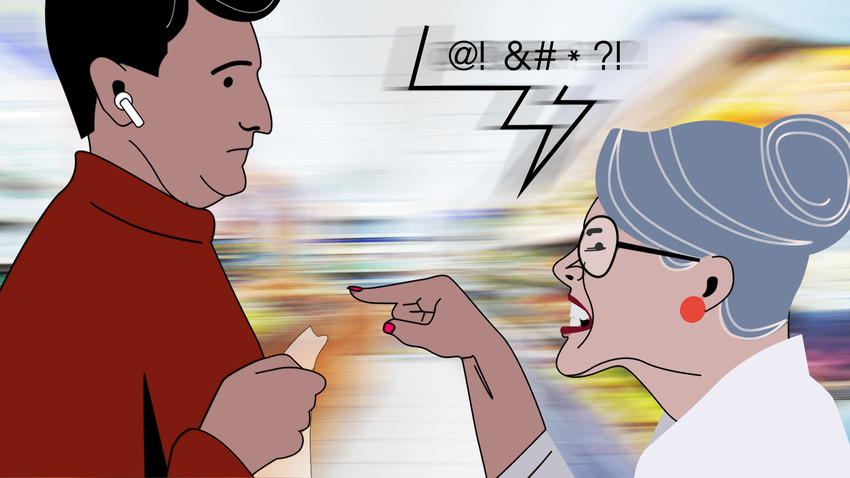 Alena Repkina
There are many things, words and meanings perceived as uniquely Russian. But we have doubts if ‘khamstvo’ is one of them.

Khamstvo has long been perceived as a unique Russian phenomenon. It was even featured in our own extremely popular listicle ‘10 Russian words impossible to translate into English’.

Soviet emigre writer Sergei Dovlatov told a rumor about another famous Soviet emigre, writer Vladimir Nabokov, in his ‘This Untranslatable Khamstvo’ essay. Apparently, Nabokov struggled to define khamstvo to his American students studying Slavic studies at Cornell university. The words ‘arrogance’, ‘rudeness’ and ‘insolence’, which he tried to use, were simply not enough to encompass the many facets of the term. Dovlatov ultimately gave his own explanation: “Khamstvo is nothing other than rudeness, arrogance and insolence multiplied by impunity.”

But isn’t it overthinking? Are we trying to create a phenomenon out of nothing? Is khamstvo a  uniquely Russian thing? Several Russia Beyond staffers weighed in on the word and its meaning.

In Russian, the word kham is derived from the name ‘Ham’, son of Noah in the Bible. Due to his unbecoming behavior, Ham was cursed by his father to be “a servant of servants”. In Russian, since the end of the 18th century, this word came to denote something low-class. Russian noblemen contemptuously used this word towards the representatives of the lower strata of society – serfs, lackeys, etc.

But, in contemporary Russian society, a kham is just a very rude person and obnoxious in his/her khamstvo (adjective of kham). What is, then, the thin border between khamstvo and ‘rudeness’? Well, one can be rude to one’s fellow workers, to one’s family or friends – but rudeness becomes khamstvo when one denies his interlocutor’s right to dignity, when one downgrades his fellows to a lower state by treating them as such. This is why it’s so much more painful than just being rude.

Meduza news outlet has recently published  an opinion piece on khamstvo based on sociologists’ research. Apparently, it says the hypertrophied form of khamstvo still exists in maternity hospitals. That makes me believe that khamstvo is not only “arrogance and insolence multiplied by impunity”, but it’s also aimed at an absolutely defenseless and helpless person. Be it a woman during labor, or an old person who can’t pay for his bus ticket or can’t move faster, or a person in a state institution whose life could depend on the mood of the staff person behind the window and whether they are willing to issue the needed documents.

Russian great satirist Mikhail Zoshchenko used to poke a lot of fun at khamstvo in his short stories. He would portray the newly established Soviet society where yesterday’s deprived workers or farmers became “the ruling class” with the flick of his pen. From that time on, they felt their unexpected power and the right to express it - especially when it came to former noblemen. That is also what Mikhail Bulgakov’s brilliant novel ‘Heart of a Dog’ is about.

Khamstvo is an international phenomenon. However, in Russia, you might face it even in those places where people are supposed to behave politely towards each other. For example, you go to a store to buy an expensive item, a TV or a washing machine per se, and instead of a smile and help from a store assistant, you get “go away, Google what you need and then come”. Or you enter the office and a security guard, instead of saying “hello”, begins to curse and question who you are. Some people are simply in a bad mood or are the result of bad parenting and just don’t think about others. The thing is that in Russia, you may face khamstvo completely unexpectedly.

The main factor leading to the need for creating culture-specific concepts is the presence of an environment in which such a condition can flourish. Some human qualities become more pronounced than others. This would make things like hospitality, distrustfulness, khamstvo and dozens of other traits all equally plausible candidates for “innate” traits. Russians, however, interestingly, have a propensity for claiming ownership of some of them, but not others.

I consider all claims of uniqueness equally baseless. But, while I’m adamantly against mythological self-interpretations, there’s no smoke without fire. The way you describe yourself is your culture. Bringing it up is proof that the fixation warrants greater attention. To me, khamstvo is the disorderly way in which “mortal” peasants (i.e. anyone who’s not a tsar, oligarch or close to the government) fight to claim something in a state that never much cared for their welfare.

Given the specific nature of how wealth was historically concentrated here, Russians have gradually learned to look out only for themselves, which, in turn, forges a society that doesn’t function as a single unit; i.e. one based around a core mission and an understanding that working together is better for the entire nation. Put simply, things like decency cut across class lines in some countries, but often do not in a country where anyone who doesn’t have influence has to fight for themselves and you sort of get several different mentalities.

In this atmosphere of helplessness, disorder and a lack of guarantees or upward mobility, the masses developed the cultural trait of abusing each other in daily interactions. “Nobody will provide for me, so I must push and fight my way to a warmer spot and a bigger piece of the pie. And if I don’t cut corners and step on people, I will myself lose.” This is the khamstvo that comes to mind for me: it’s about hopeless masses without power being nasty, because they feel betrayed - so they abuse what little power they have over each other: It’s more than just rudeness, because it demands more context - one revolving specifically around Russian class consciousness.

Imagine an every-man-for-himself situation: It’s 1997. The setting is a bus stop. It’s freezing. An under-maintained bus breaks down somewhere on the road from the depo to the busy stop. The underpaid driver lazily fixes it, then arrives late. A crowd of 25 people who are, for the most part, great-grandchildren of actual peasants, begin to argue over the order of the line; most never remember a time when forming an orderly line did any good - the mass of people instead resembles an inkblot from above. Someone in the crowd refuses to put out their cigarette. An elderly woman complains rudely. A man then calls out the smoker for being a “kham”. Five or six people attempt to shove themselves through the tiny door as heated words are exchanged. The bottleneck leads to terrible congestion, slowing the boarding time even further for everyone involved. On top of that, 90 percent of the people in that crowd are underpaid, while the people just two levels above them live lavish lifestyles. Everyone is stressed and angry.

Now, picture a Japanese or a Swedish bus waiting line and cross-reference that with the presence of laws and protections of individual rights in those countries, as well as the salaries there, and you’ll have your answer. If someone breaks protocol in Tokyo or Stockholm, instead of resorting to calling the other a “kham”, the victimized party just stands there, wide-eyed. Because their sense of right and wrong is nurtured by the presence of certain state-sponsored guarantees that ensure their decency - together with a high standard of living. And to break this contract seems completely illogical: why abuse rules if they work and apply to all equally? Not in Russia, they don’t.

Therefore, to answer the original question, in my opinion, khamstvo is a more specific, precise term for denoting rudeness (grubost), which implies an underlying set of historical and ethnological precursors that rudeness does not alone presume. In my experience, this character trait is quite prevalent in Russia. Cultures don’t resort to using separate concepts for no reason.

Khamstvo isn’t a specifically Russian trait - it no doubt exists in other societies. The issue is that Russians, oddly, find this comforting, as if establishing that somehow solves the problem.