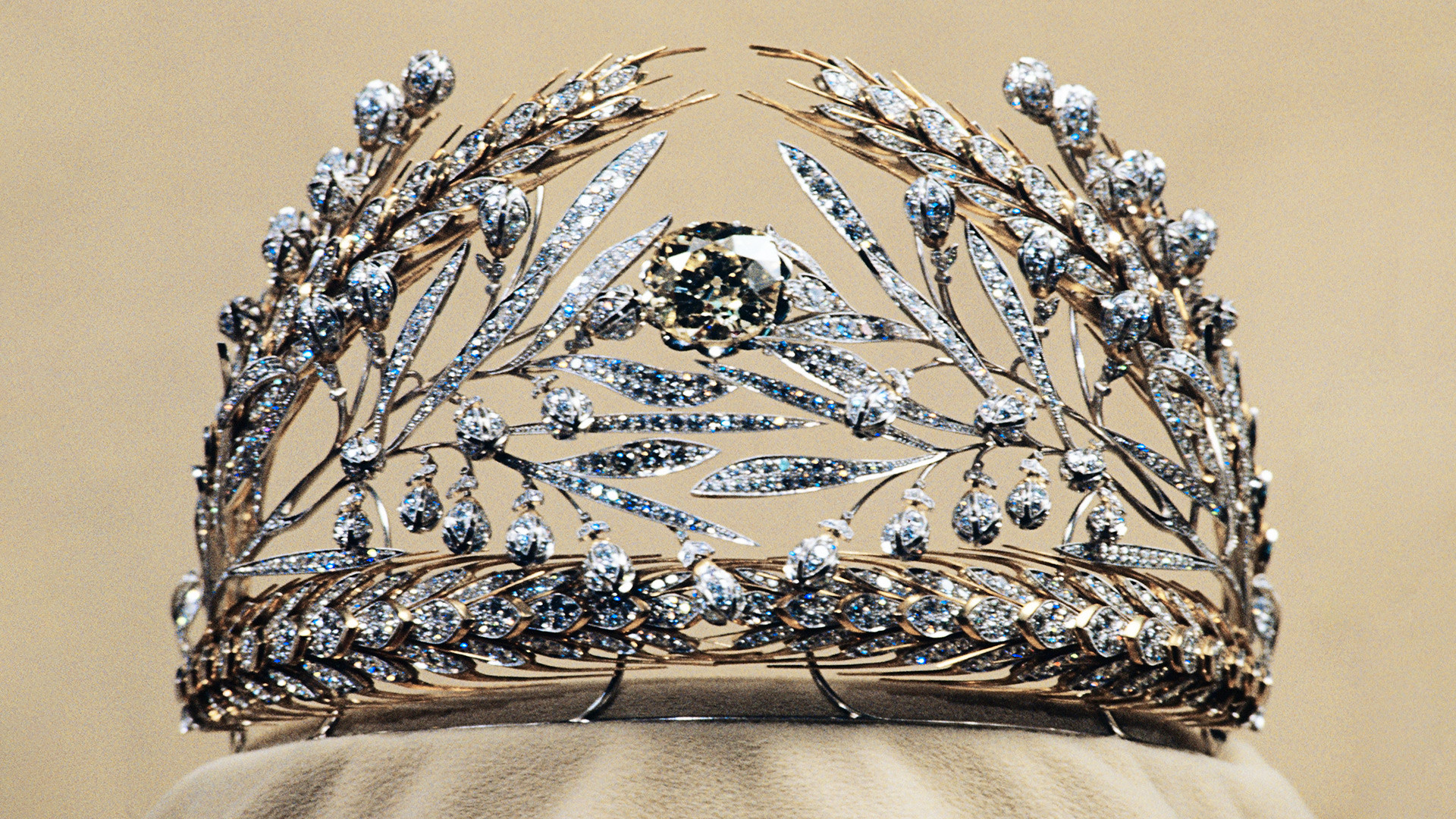 It is easy to imagine these luxurious emerald necklaces and diamond tiaras in the spotlight at a high-society event, but they were never actually worn. They were made in the Soviet period specially for a Diamond Fund exhibition featuring recreations of lost historical jewels. 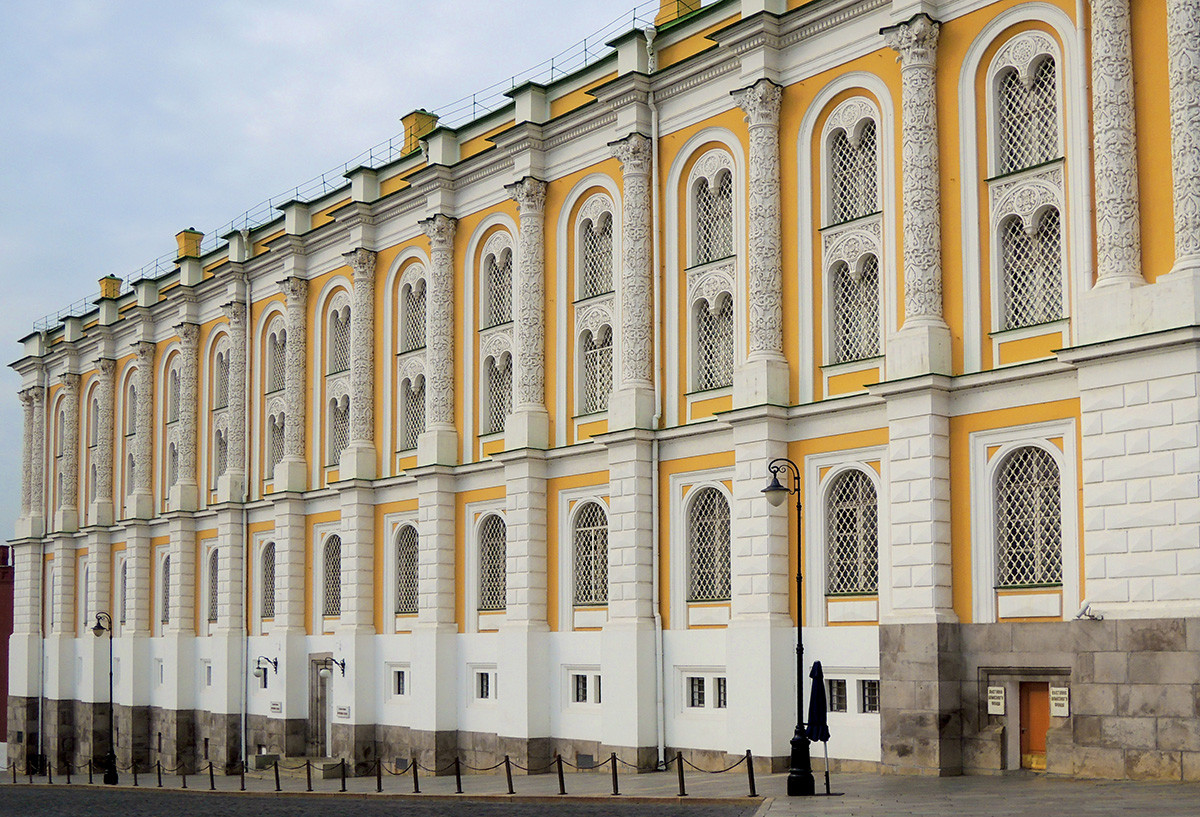 During World War I, Romanov treasures that had been stored in the Diamond Room of the Winter Palace were transported to the Moscow Kremlin’s Armory for safekeeping. However, the 1917 Revolution soon broke out, and the priceless imperial regalia and jewelry wound up in possession of the Bolsheviks. In the years that followed, the country’s new leadership arranged large sales at foreign auctions and held onto only the most unusual gems and jewelry. 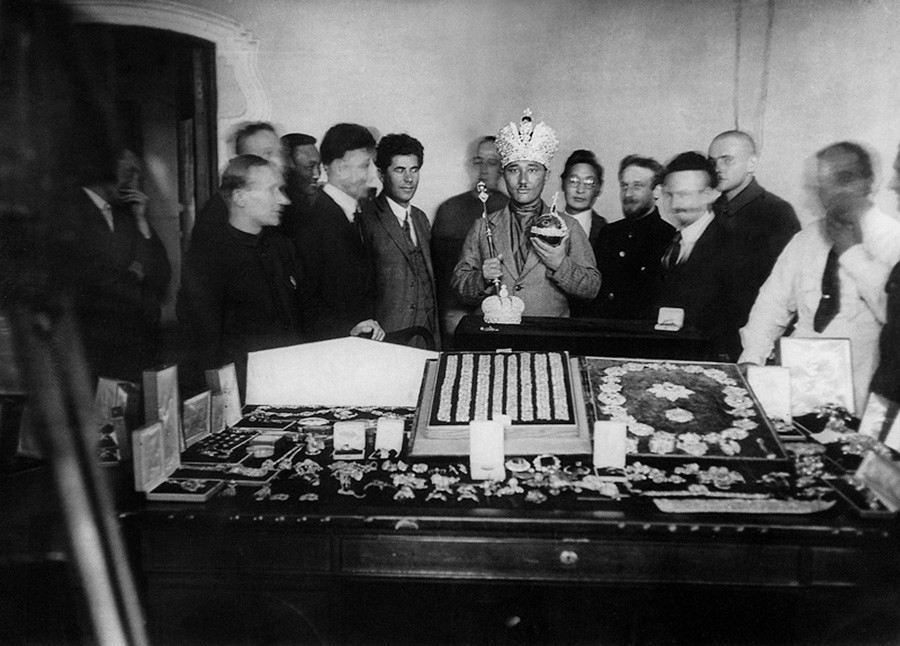 In 1967, the Kremlin opened an exhibition of gems and works of artistic jewelry to commemorate the 50th anniversary of the Soviet government. Initially, it was supposed to last for one year, but it turned out to be so popular that it was turned into a permanent exhibition. In the 1970s, jewelers at the Diamond Fund decided to recreate the jewels of the Diamond Room from old catalogs. Their creations are still on display today.

Russian Field is a replica of Wheat Sheaf, one of the most famous Romanov diadems. The original belonged to Empress Maria Feodorovna (1759-1828), the wife of Paul I, and was made by the Duval brothers in the early 19th century. It consists of golden “flax ears'' decorated with diamonds and a set of leuco sapphire (a colorless sapphire symbolizing the sun) in the center. It was sold at auction, but nothing else is known about its fate.

The Soviet diadem was made in 1980 in honor of “the development of virgin lands.” The yellow ears of wheat are made from gold, and the white flax stalks are made from platinum and decorated with 1,837 diamonds of different sizes. In the center of the tiara there is a yellow 32.52 carat diamond.

Another famous showpiece was a recreation of a lost pearl diadem that belonged to Alexandra Feodorovna (1798-1860), the wife of Nicholas I. The original 1841 diadem by Carl Bolin was resold several times and is now most likely located in the Philippines. In 1987, Soviet jewelers succeeded at making a fairly accurate copy of this masterpiece. The tiara is decorated with 928 diamonds and 25 large pearls. Unlike in the original, the pearls in the recreation are artificially grown, and instead of silver the jewelers used platinum.

The Soviet and the original necklaces.

Plastron is an enormous type of necklace that covers not just the neck, but also the chest. This decoration is an exact reproduction of an old plastron made by Carl Faberge in the mid-19th century. It consists of five movable bows, each of which contains a cabochon-cut Ural emerald.

Bandeau brooches like this were used in tsarist times to decorate dresses, and they were usually sectional. This exact brooch was never actually in the Romanovs treasure box but is rather an original creation made by Soviet jewelers in 1991 based on images of several old jewels. Flower Fantasy consists of five moving parts and can be transformed into a necklace, small brooches and pendants. Weighing almost 400 grams, the jewelry is made from platinum, gold, 1,135 diamonds, 68 rubies and 15 pearls. 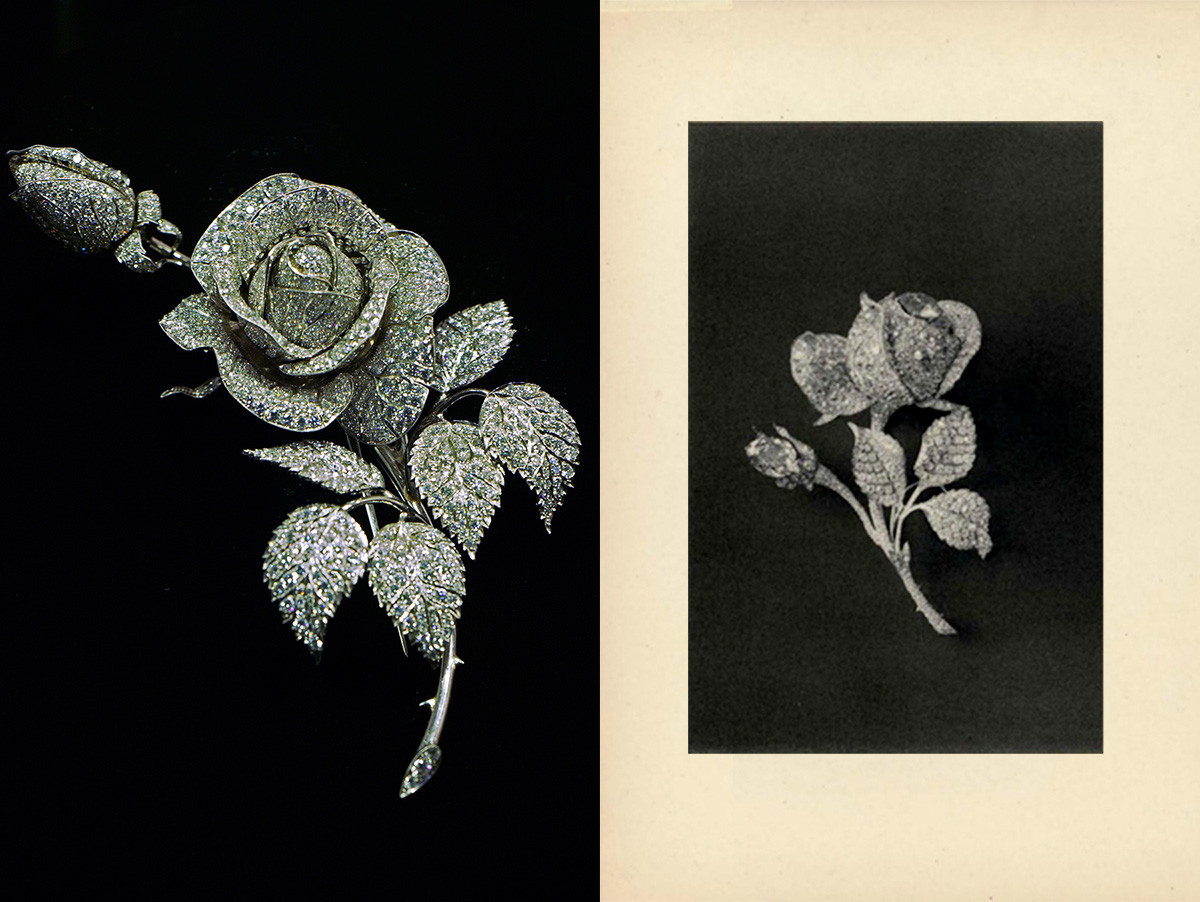 Soviet-made brooch and a photo of the old brooch.

The last empress, Alexandra Feodorovna (1887-1918), had a brooch shaped like a rose whose likeness is only preserved in old photos. But Soviet jewelers did not simply make a copy of this item. The lifesize Rose is made of platinum and fixed on springs, so the flower appears to sway like a real one. The brooch is decorated with almost 1,500 diamonds and was made in 1970 for the centenary of Vladimir Lenin. 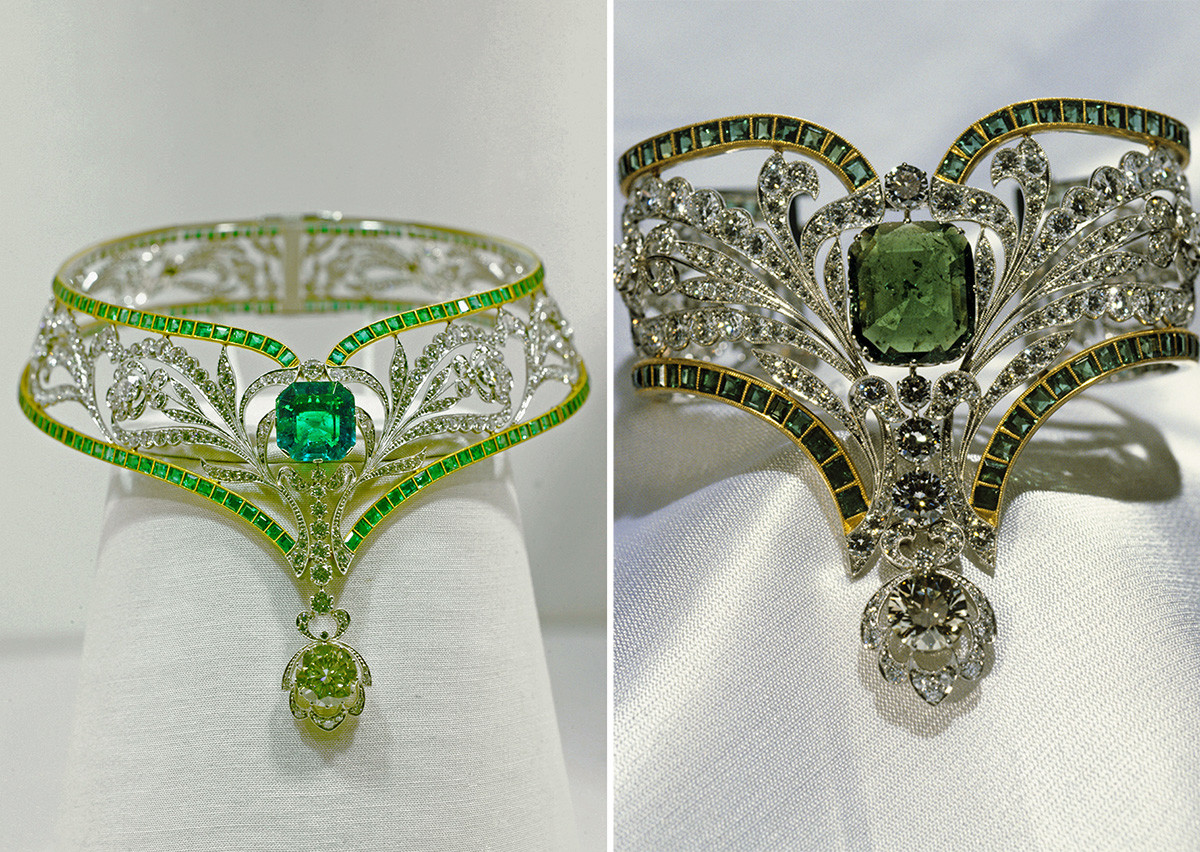 The Spring set was created in 1977 based on old Russian jewelry. The necklace and bracelet are made of platinum and gold with Yakut diamonds and Ural emeralds. 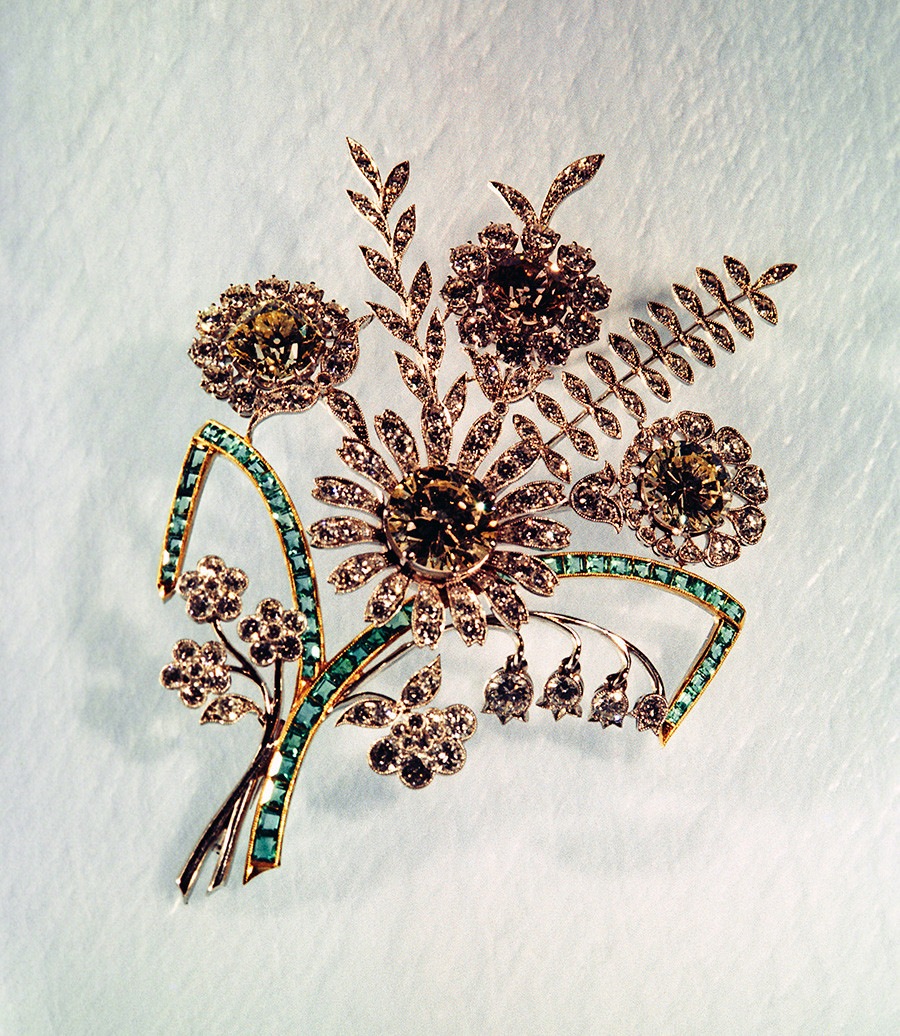 A small precious bouquet, made in 1968, this item resembles jewelry of the 17th century with popular flower motives. The Diamond Fund has preserved several similar antique brooches. In the past, masters put foil under the stones to “color” the diamonds. The Soviet brooch is made of diamonds and emeralds. 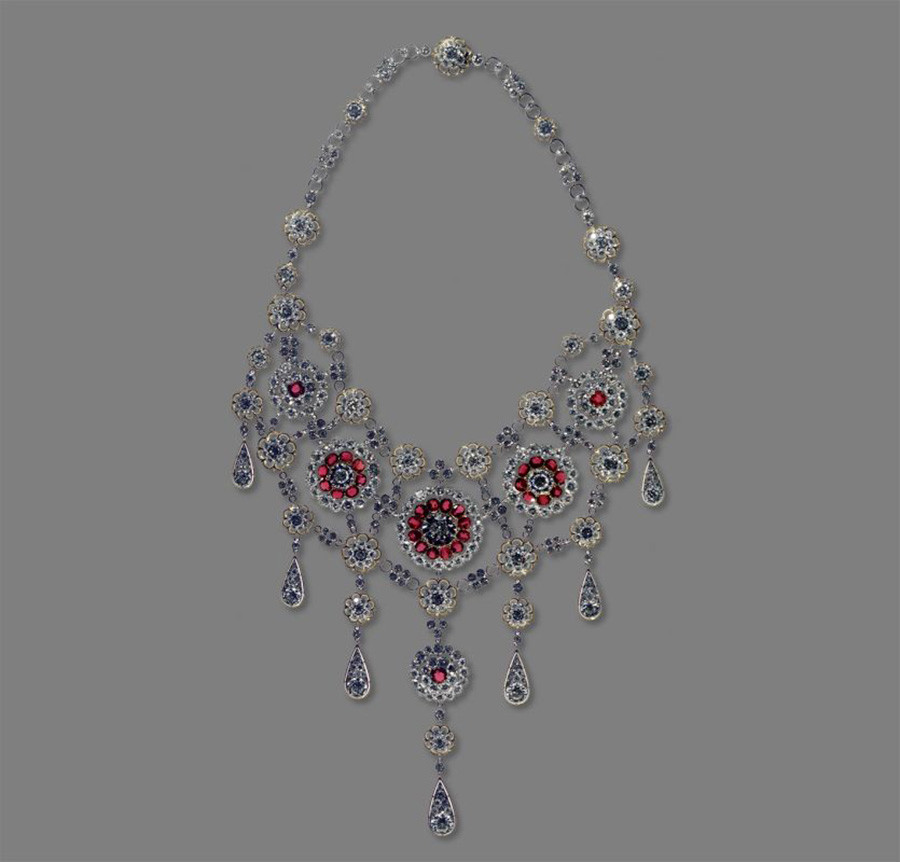 This platinum and gold piece was made in 1981 to commemorate the 35th anniversary of the Soviet victory in World War I. It features 512 diamonds and 31 rubies.