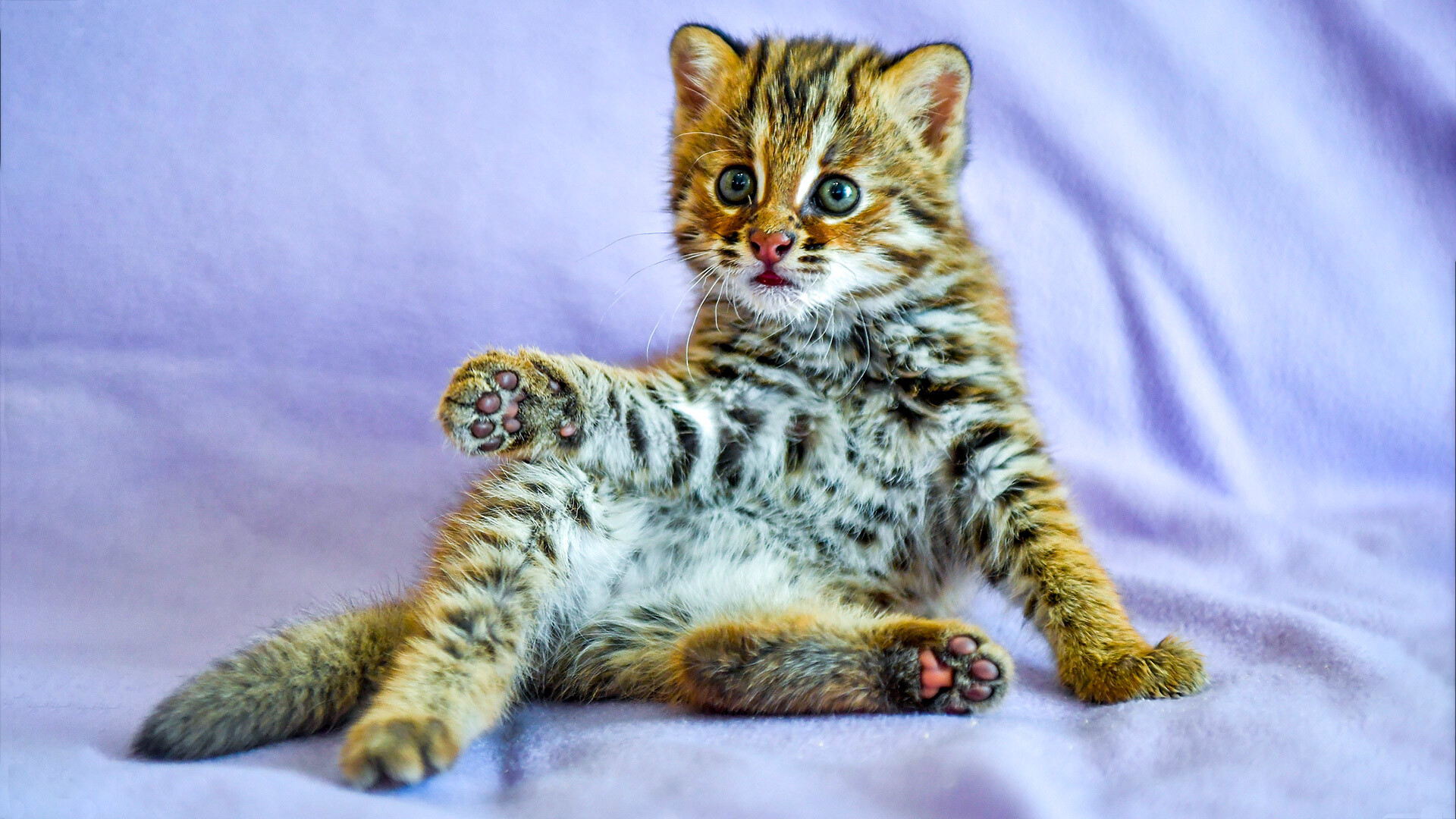 A month-year-old Amur leopard cat kitten named Zabava who was rescued and brought to the Sadgorod zoo in Vladivostok.

Yuri Smityuk/TASS
This feline can swim, fish and climb rocks. But you’re not likely to ever catch a glimpse of it doing any of those things.

“Kitty, have you warmed up enough? Maybe you can get out of there now? I have to get home,” Primorye resident Svetlana can be heard addressing a young striped cat, who has found refuge underneath her warm car. Negotiations last for more than an hour, before the cat decides to diplomatically make its way out and disappear into the woods.

Despite its extremely cute, lovable appearance, with huge eyes and fluffy paws, the cat hiding in the chassis is an absolute wild beast - and not some house pet you can cuddle up with. It’s also been registered on the Red List of threatened species. Meet the Amur leopard cat - also known as the Far Eastern forest cat. 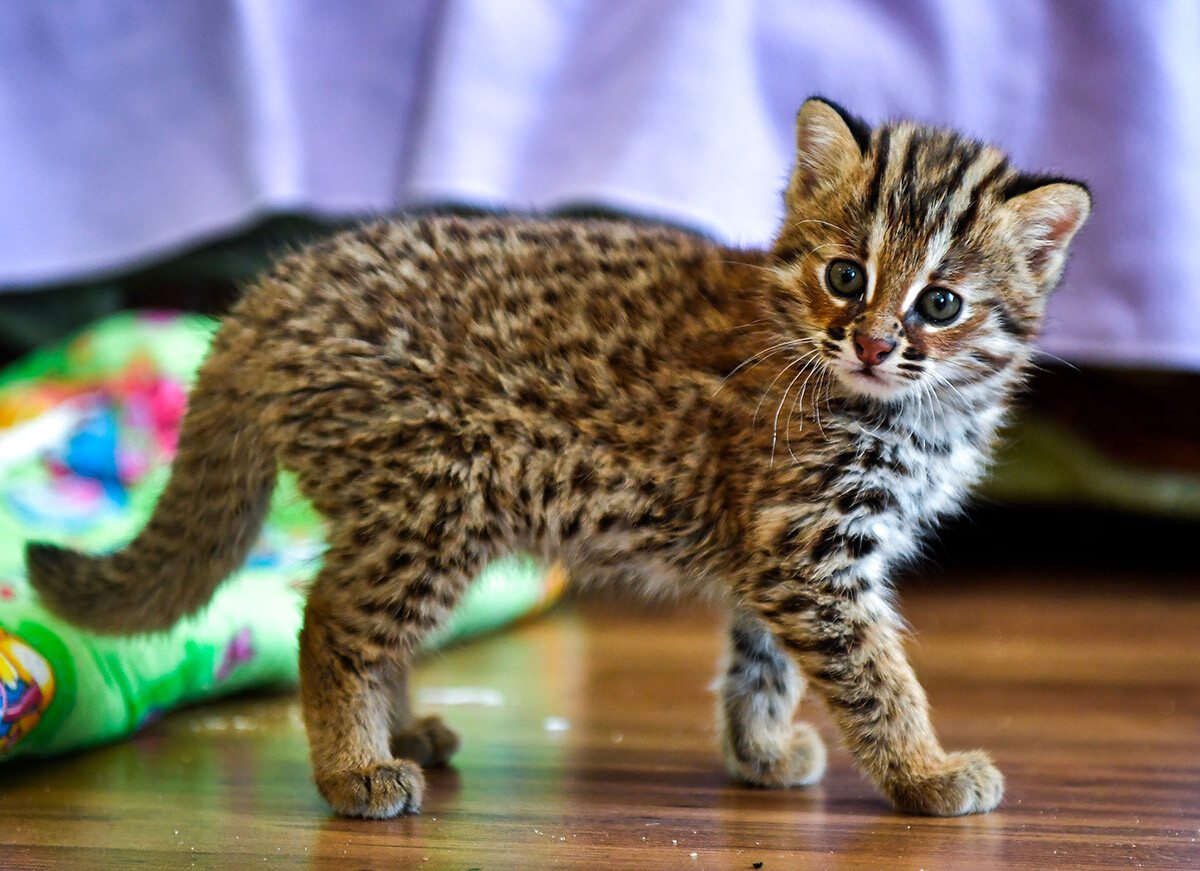 The Amur cat is a northern subspecies of the Bengal cat - the one that inhabits the tropics of Indonesia and the islands of Japan. It’s known as the Amur ‘leopard cat’, due to its fur pattern.

Similar to the Bengal, the Amur leopard cat adores water and always lives near a source.

Most of the population in the Primorye is focused near the shores of the large Khanka Lake, surrounded by forests. Nature photographers spotted them in the ‘Zemlya Leoparda’ (the Land of Leopard) national park, as well.

Unlike many cats, the Amur leopard cat is a great swimmer, who not only hunts rodents, but catches fish, as well. This cat is also a great climber, who can scale both trees and rocks, where it can mount ambushes.

It has unique stripes 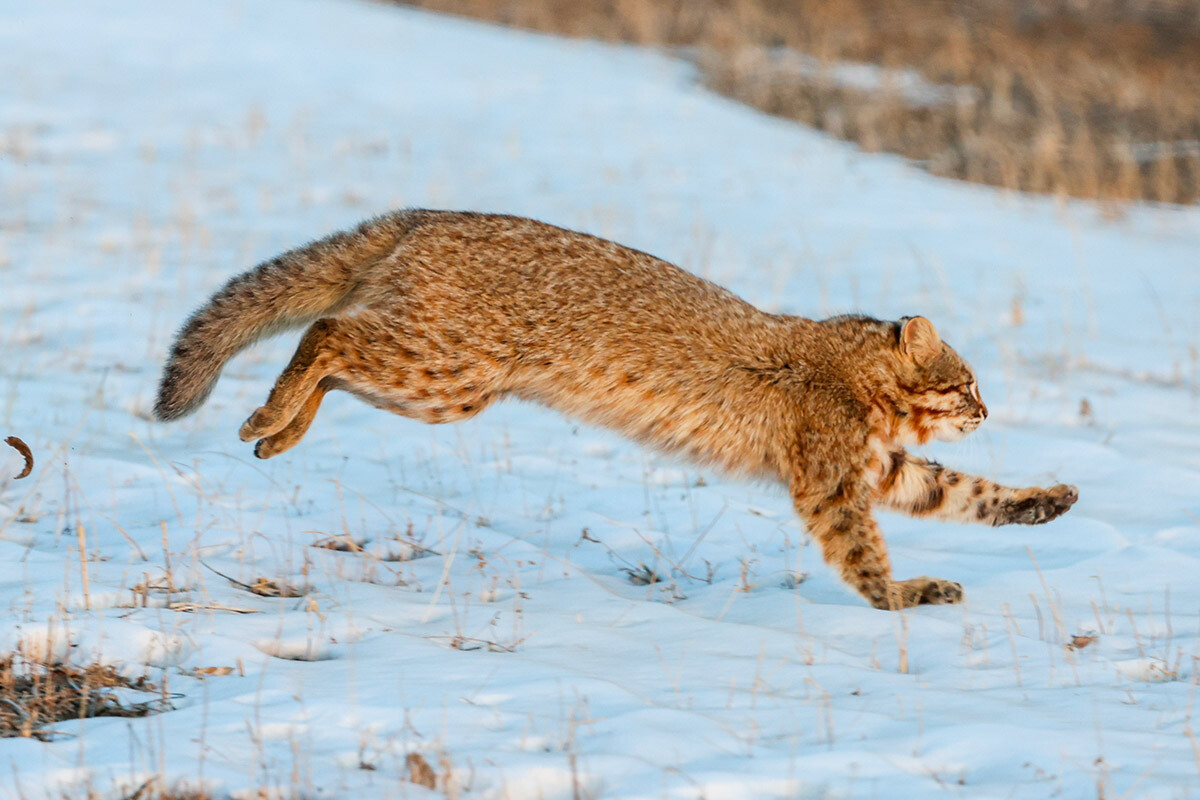 An Amur leopard cat spotted on the territory of Khankaysky Municipality.

As with the tiger or leopard, the pattern on an Amur forest cat’s coat is unique to the individual, like fingerprints on a human. They exist in different tones, from pale yellow to brown, including various spots. Along the cat’s back are usually three stripes and two more on its forehead. Unlike other small cats (the European forest cat or the steppe cat), the Amur has longer limbs, which enable it to run fast, practically hovering over the ground.

No one knows how many of them there are 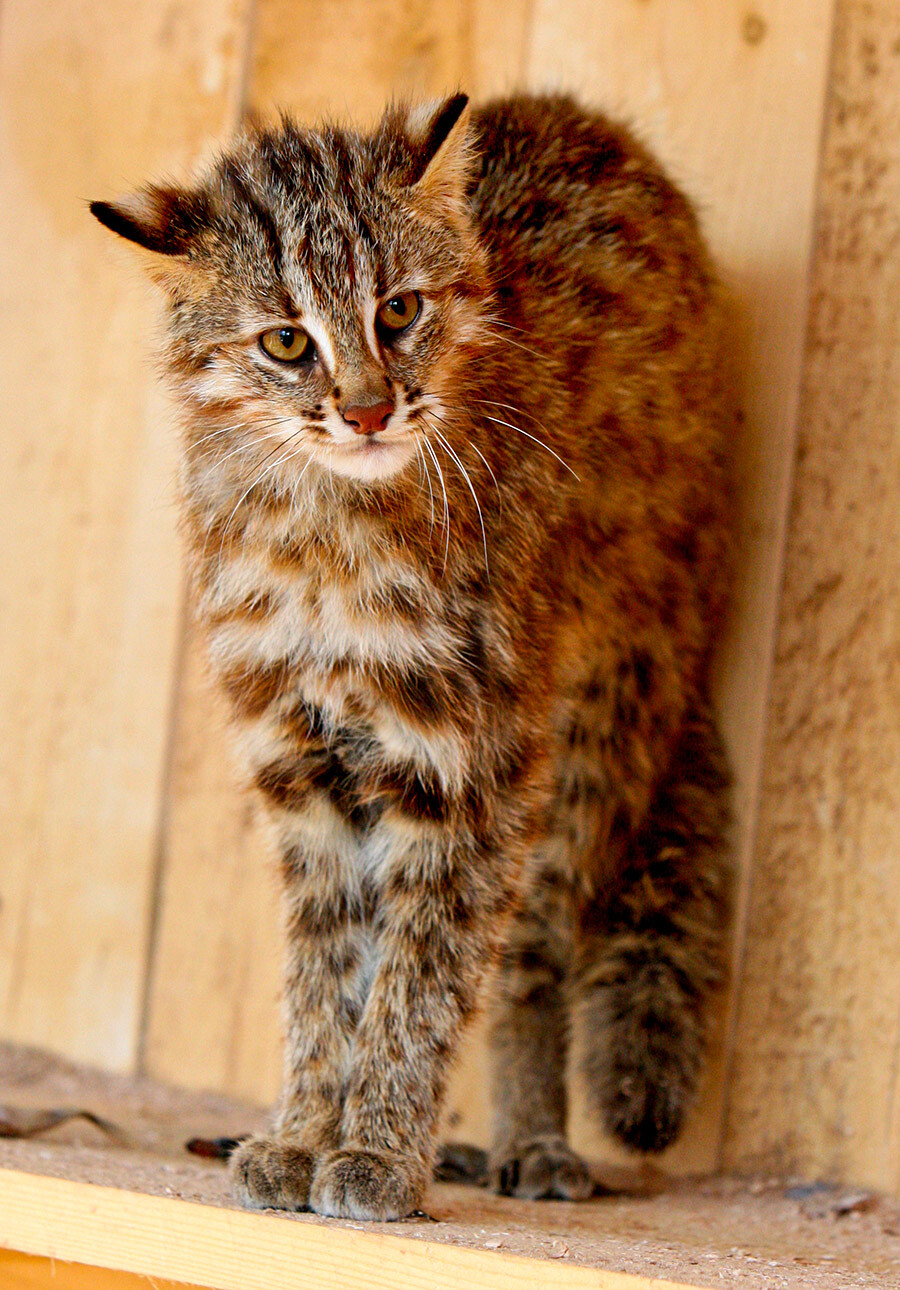 The chances of seeing this cat in the wild are slimmer than those of encountering a tiger, although the two are neighbors. The Far Eastern leopard cat has been put on the Red List of endangered species and is considered so rare that scientists have been having trouble estimating how many of them there are. Nevertheless, locals believe that the number has been on the rise in recent years. “The kitties were quite rare before - maybe a couple of sightings in a year, if you were lucky. But, over the last two months, I’ve seen, like, 30 of them. They began poaching chickens and ducks from the locals. There’s more food in the fields these days, lots of pheasants this year, in particular, the population has apparently increased,” says Svetlana, the woman who shared the video of her encounter with the “car mechanic” cat.

It gets caught stealing

Usually, wild animals try to live far away from the noise of the cities and people, but the Amur leopard cat makes the occasional visit to a village to keep the chicken and goose population under control. Local news often talk of capturing this striped predator red-handed - interestingly, it’s nearly always the younger ones, out for an easy kill. They’re usually extremely upset when caught, lashing out and hissing at the people for interfering with their hunt.

After apprehending the “criminals”, the cats are examined by vets; specialists from local animal rescue centers then take them to the forest, closer to nature and farther from domestic geese. 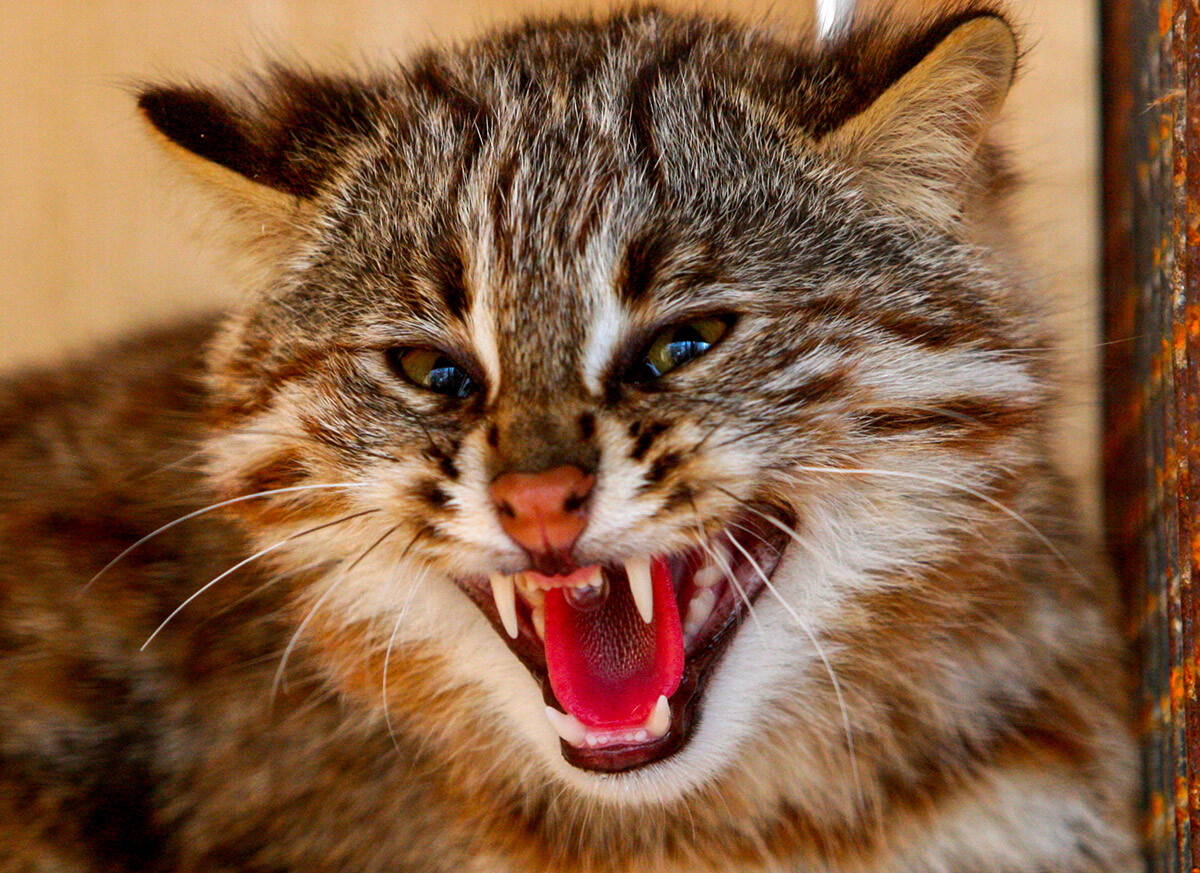 Taking a single look at this cat, you might think you’re looking at a regular domestic ‘Vasily’! Soft paws, bright stripes and a fluffy tail. Still, it is slightly larger (about five-six kilograms - and a little more during winter), the face is shaped slightly differently, the eyes are huge and it also possesses a trademark sneer. Meanwhile, when just a kitten, a forest cat looks much cuter and even has a tendency to allow physical contact. There were numerous cases of people in the Far East rescuing little Amur leopard kittens by the side of the road, mistaking them for the domestic kind.

This kitten, nicknamed ‘Zabava’ (“Fun”), was dying of hunger when she was rescued at just two weeks old and nursed back to health with a bottle. But when she grew up, it turned out she was very different to a regular cat, which is when she was taken to a vet and it was finally determined that the locals had in their possession a genuine Red List specimen. Just look at how playful she is with the vet and how she growls at the sight of food. And this one is just a baby.

It goes without saying that keeping this animal in a home is a crime! Besides being a Red List cat, its capture is strictly forbidden by law: it’s very important for the forest cat to live in its natural habitat. Nevertheless, poachers are always on the lookout, selling them to owners who, nevertheless, try to domesticate them.