Meet the Russian desman, one of the rarest and WEIRDEST animals (PHOTOS) 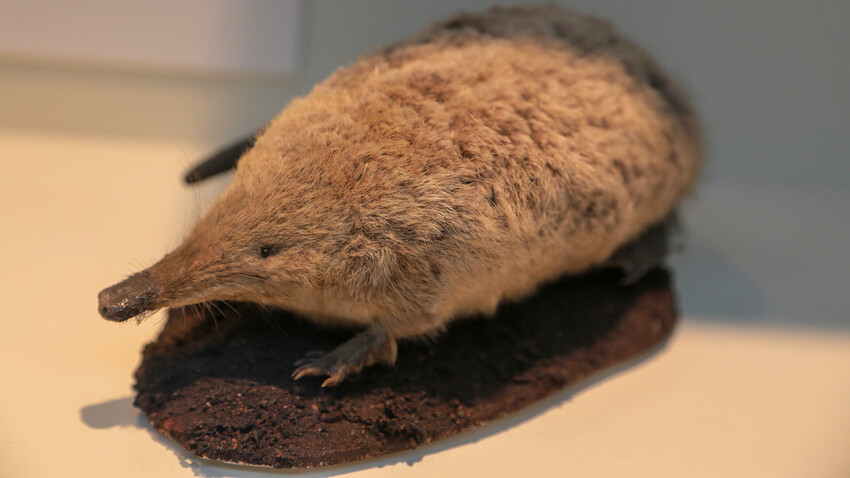 John Cummings (CC BY-SA 3.0)
This small peculiar-looking species is allegedly about 30 million years old and can only survive in Russia these days. However, life is a daily struggle for the poor creature.

The Russian desman doesn’t look like any mammal you’ve seen before. It’s as blind as a mole, lives in water and has membranes like a platypus. It has a strange trunk-like nose, which allows it to “see” and feel around its dugout home. Meanwhile, its tail is similar to that of a rat, but thicker at the base. Another interesting feature is its tendency to secrete an intense musky scent - so strong that being anywhere in the vicinity of the Russian desman when it does this can be a real test of endurance.

The Russian desman isn’t stress-resistant: it’s capable of dying of fright or a loud noise - or at the mere prospect of a fight with a cohort… or even from a strong smell of glue.

Finally, it’s the only mammal we can comfortably add the adjective “Russian” to: the creature appeared here some 30 million years ago. The species has five subspecies, of which four have been extinct for the last million years. And the remaining species has only managed to stay alive on Russian territory.

The Russian desman is very picky about its habitat. It can live only in underground aquifers - lakes at the mouths of rivers that get flooded in spring and exit their banks, linking up with the larger body of water. The animal uses this time to grow its ranks: the population mingles, procreates and makes new families. 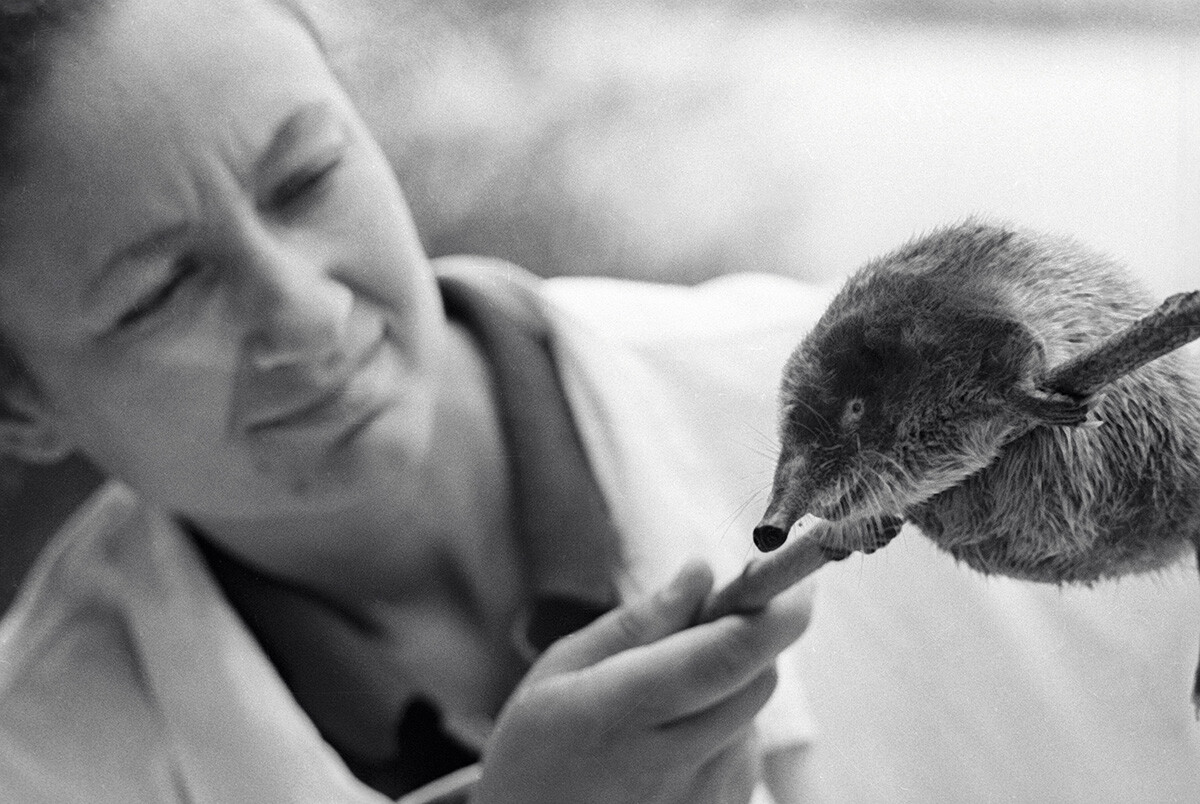 Meanwhile, it’s very important that the aquifer does not freeze over in winter and that the shores are high enough for the little mammals to make their cubbyholes; the holes are used for various purposes - some for rearing offspring, others for taking a rest from parenting and others still - for surfacing, as the animal can’t be underwater for longer than five minutes.

The Russian desman’s long nose with its coarse hairs helps it move around in the maze-like “plumbing” system. Assisting those is the pungent scent they secrete, helping them to mark their path. And it uses its “trunk” to literally vacuum for food - silt, bugs, mollusks and so on.

Paleontological research claims that the Russian desman has remained virtually unchanged for millions of years. Such animals are referred to as living fossils. But their numbers are extremely small, estimated at only 6,000 individuals, according to a 2020 census. They can only be found in the basins of Central Russia and have been included in the Red List of endangered species under Category 1 - species that are at risk of extinction. The only higher category is 0 - which means a species is “most likely” already extinct.

A scent to die for

Weak vision and a slow pace make the Russian desman practically defenseless against predators, but most prefer to avoid it, due to the aforementioned strong scent it secretes. However, this secretion is simultaneously the reason it’s so endangered in the first place - all thanks to humans, who have been hunting it for centuries for that musk-producing gland. The tails would be cut off, dried and hung in closets to keep out pests. 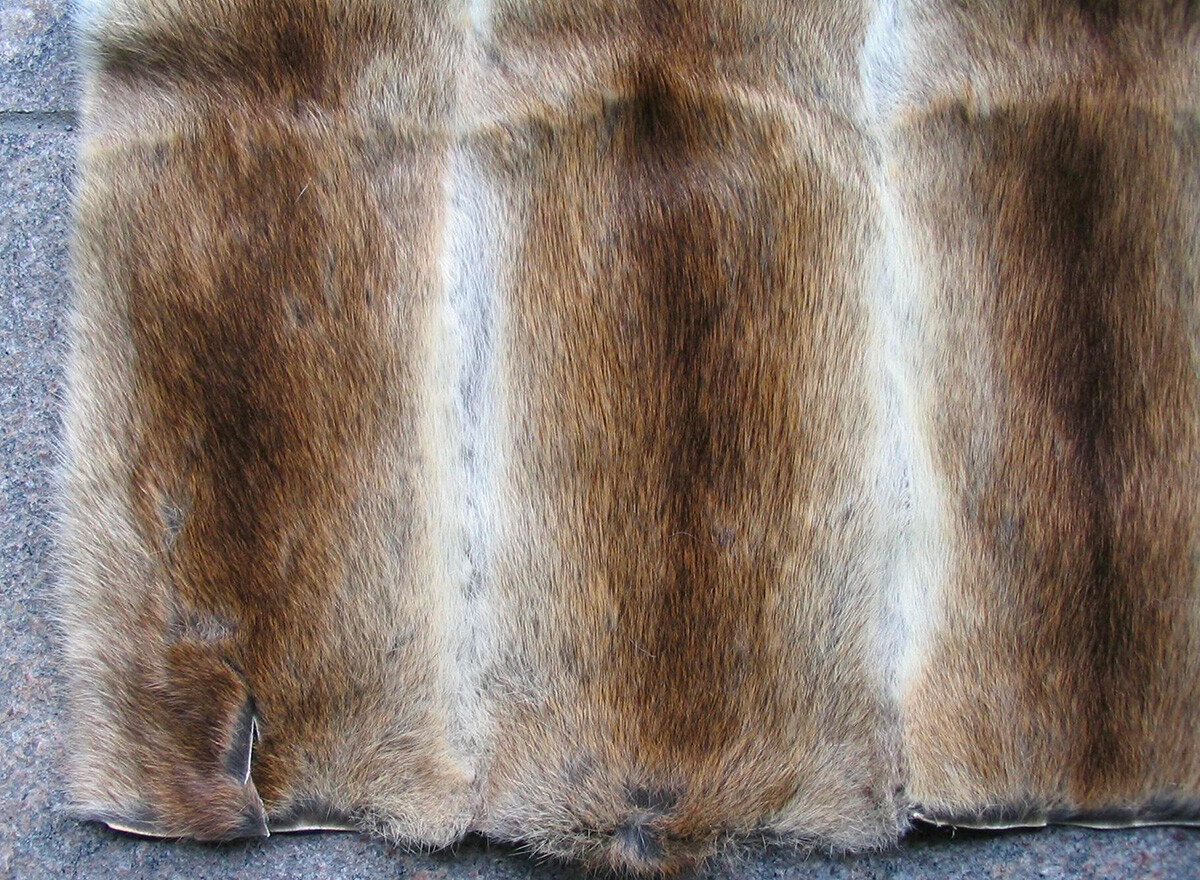 Dr. Ivan Lepekhin in 1769 wrote: “I think the scent could actually be stronger than beaver musk… I could not hold the Russian desman in my hands for longer than five minutes without getting a headspin.” This presents an obvious problem of using the scent to ward off closet bugs, as well - so much so that Lepekhin also wrote that “sitting next to [the people that do] is only ever possible if one has a very blocked nose.”

The doctor also added that the Russian desman’s hides are of no interest to anyone for the same reason - the strong scent. But, this changed by the start of the 19th century. The fur became a valuable commodity for its looks - specifically, its shine, thickness and water resistance, due to a difference in the structure of the hairs, which are thicker at the ends - instead of the base. This feature allows the animal to exit the water, do a few shakes and be nice and dry again. The fur used to cost more than that of a beaver. And, by that point, the musky secretion had started to be valued by more than just people wanting to use it to preserve their clothing. It was exported to France, to be used in perfumes - it made the scent more long-lasting. So, it can be said that the hide and the scent have become the Russian desman’s undoing, leading to a very real threat of extinction.

There were other anthropogenic factors that threatened the population, including floodplain flooding, hydroelectric power station constriction (which tends to flood Russian desman habitats), deforestation, cattle farming, aquifer pollution and climate change. In 1920, the Soviet government announced a ban on Russian desman hunting, in order to restore their numbers. It worked and the ban was lifted - leading again to mass killings. In 1957, the creatures attained protection status. However, a different threat now loomed over them. 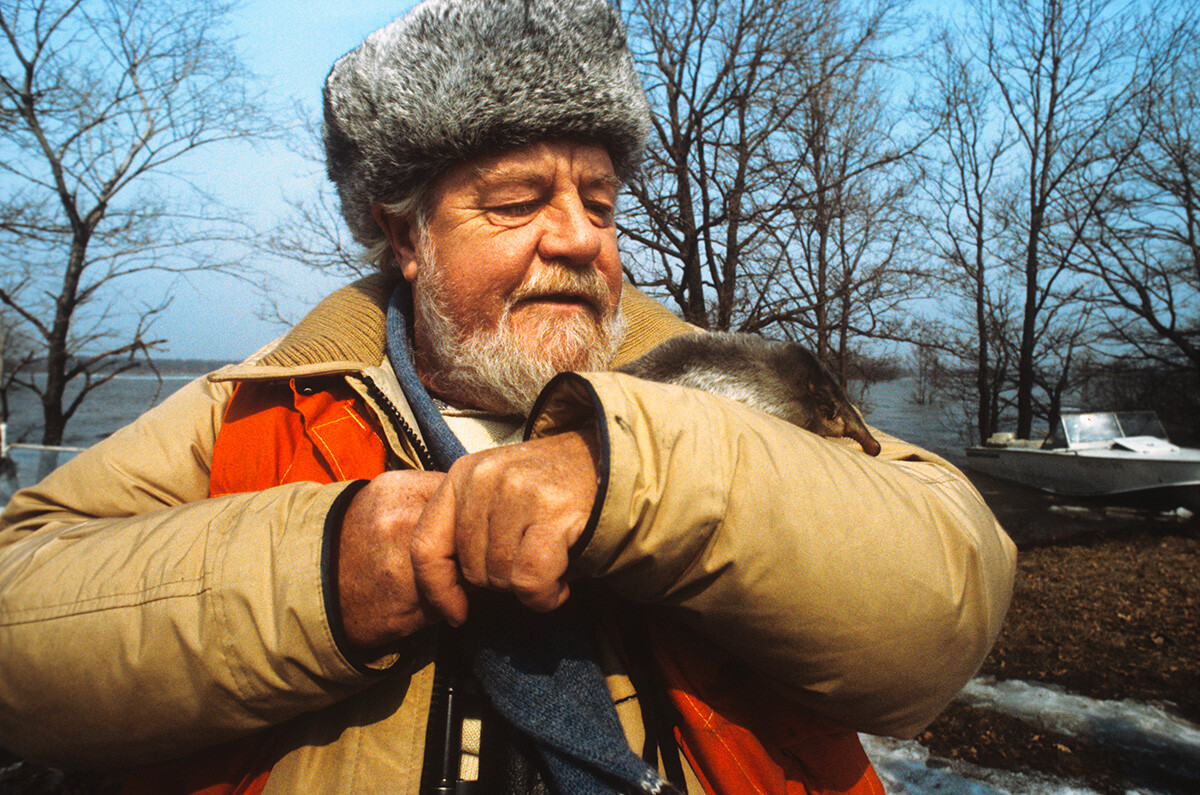 “Before the 1990s, the population stood at 70,000 and was, more or less, stable,” says Aleksemy Zimenko, director for the Center for Natural Preservation. But, Chinese fishing line nets hit it hard. “The nets are often abandoned… and, by the early 2000s, have led to a decline of the Russian desman population down to only 25,000 individuals.”

After a ban on the import of said fishing nets and electrical fishing rods, the numbers have stabilized, but not grown. The import of fishing line-based materials is still allowed.

The Russian desman can die from just about anything

One of the ways to grow a Russian desman population is to place it under protection in specially zoned areas and natural reserves or grow the population in nurseries. But, the latter presents major problems: Russian desmans in captivity can die from just about anything.

“Russian desmans exhibit extremely low stress-resistance,” says Maria Onufrenya, who, together with her husband, has been studying and attempting to increase the animal’s population. “One creature I was caring for died simply because I took it in my arms. One day, I was drilling something in the basement and a couple of Russian desmans - probably terrified by the sound - simply got sick and died. And, one time, I was fixing something using glue and the creature died because of the strong smell.” 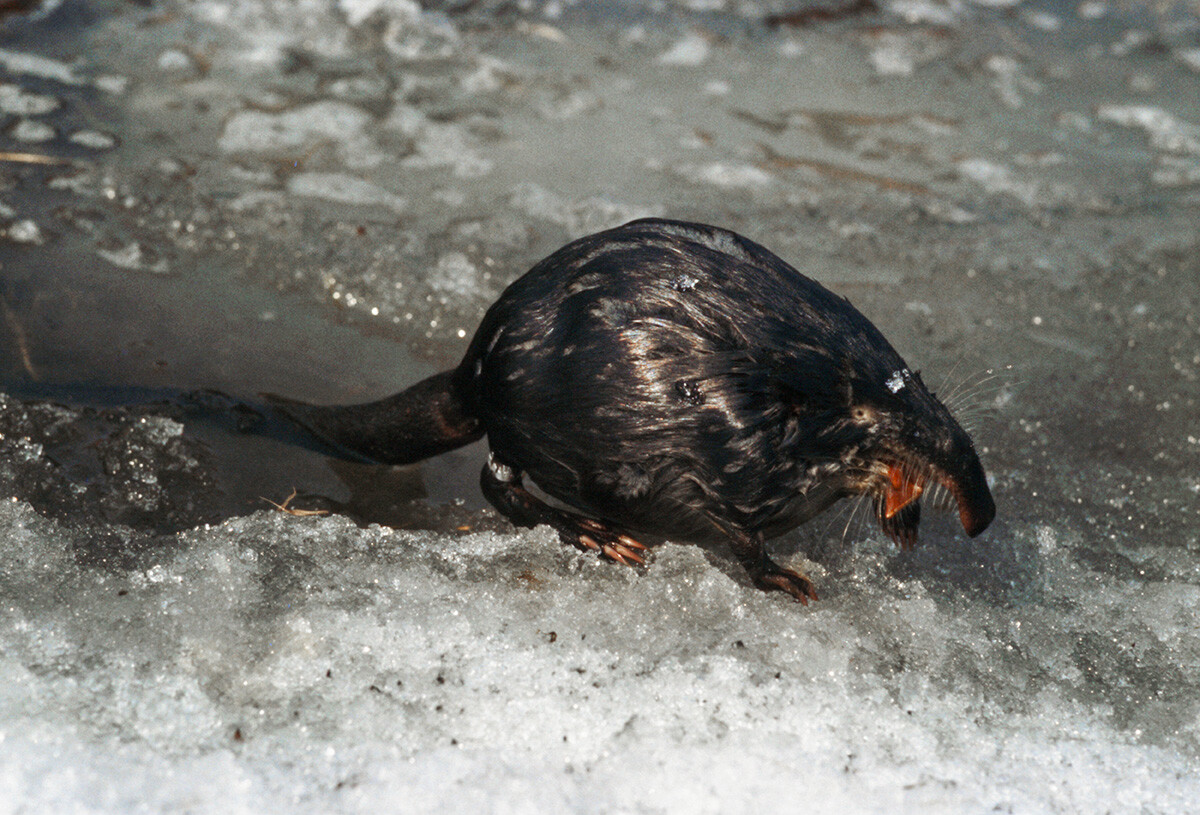 A Russian desman can’t be grabbed by the body - only by the tail. It can only be fed in the same spot and situation - any circumstantial changes can provoke the animal to start fighting its siblings and get sick. They can even get sick from the wrong diet, lose weight and die as a result. “When the creature gets sick, its fur gets wet, it becomes lethargic and loses weight. It visibly feels bad. Each time this happens, you have to investigate the cause. If the culprit is upset metabolism, vitamins and minerals are prescribed. But sometimes, it’s impossible to tell,” says doctor Marina Rutovskaya.

As it prepares to fight a sibling, the Russian desman stands up on its hind legs and freezes up. The fight can be deadly without even starting. “Two adult males once ended up in a trap. We were trying to get the net off when one of them got up on its hind legs in preparation for a fight. But it never managed to strike - the other one simply fell over dead,” Onufrenya says.

The biggest difficulty with the Russian desman is that it simply doesn’t want to multiply in captivity. And, if this does happen, it’s a whole separate mission to preserve the offspring. Stress can make a Russian desman eat its own children. The creature is also monogamous, selecting one partner for a lifetime: if one died, the other will end up grieving and, in all likelihood, also soon die.

Since 2010, scientists have been trying to at least monitor the population (counting it and preserving ideal conditions for its survival in reserves) and avoid capturing and resettling Russian desmans in different locales. In 2020, for instance, they only counted 190 individuals across 120 lakes, which is extremely low. And risking the life of just one is not desirable. Then, there are times when, setting off to find a population, scientists don’t manage to come across a single individual in the entire season. The community has a dark joke about this: “Does the Russian desmans even exist at all?”