Why are there so many colorful buildings in Russia? (PHOTOS)

Lifestyle
Alexandra Guzeva
The brighter the building is, the more it should please the eyes of the residents, shouldn’t it? We took a closer look at the “flashy” architecture in the land of stereotypically gloomy people. 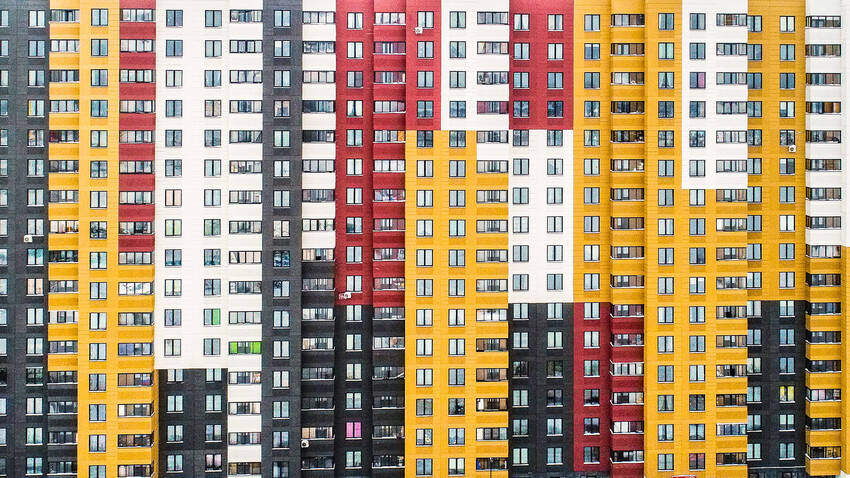 In Soviet times, most “bedroom communities” in big cities looked something like this: monochrome concrete khrushchevka apartment buildings and gray asphalt streets. Only in summer were they diluted by greenery, while, in winter, the palette was refreshed by snow. 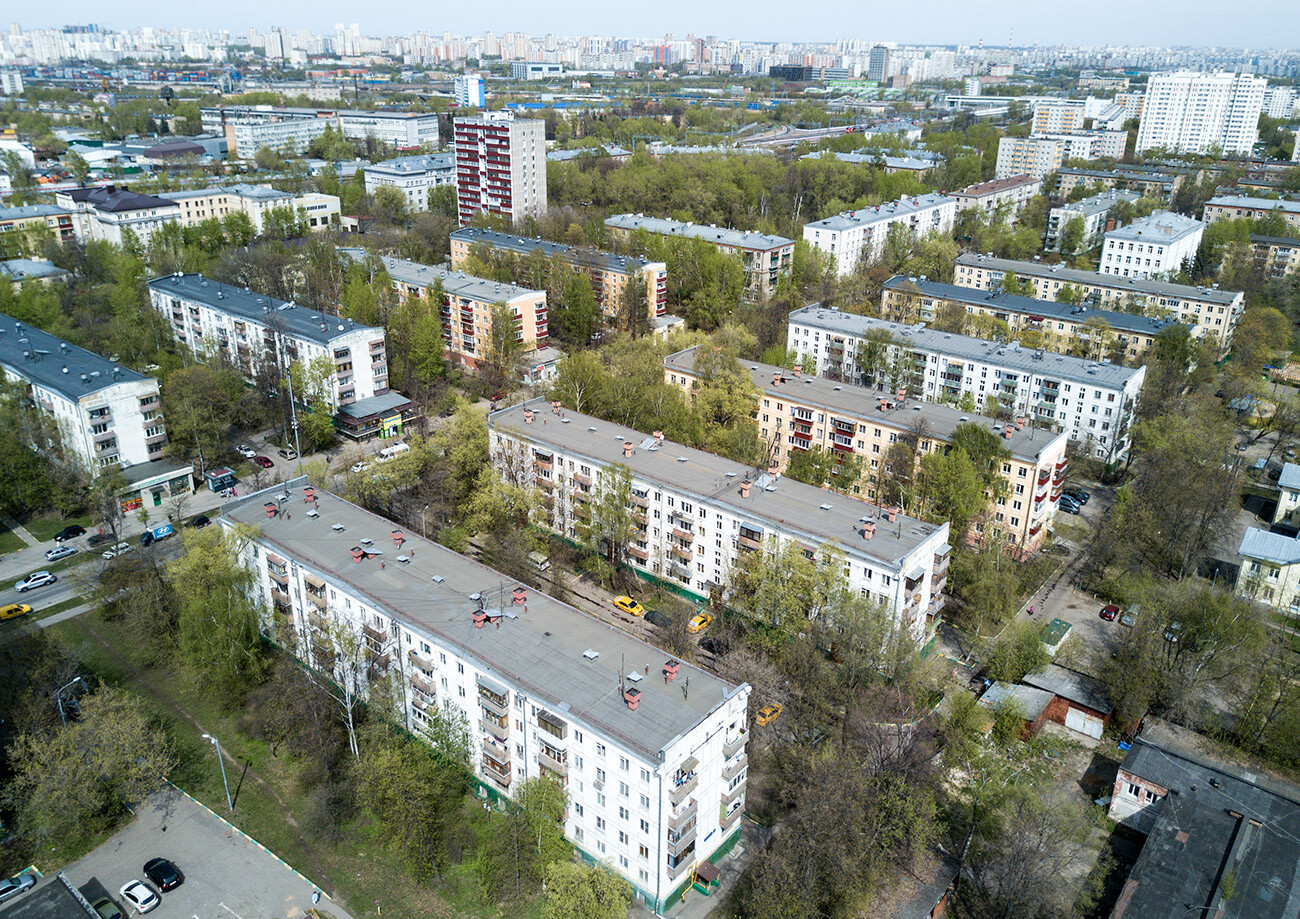 Today, however, apartment blocks look different. Foreigners often wonder why there are so many colorful residential buildings in Russian cities. 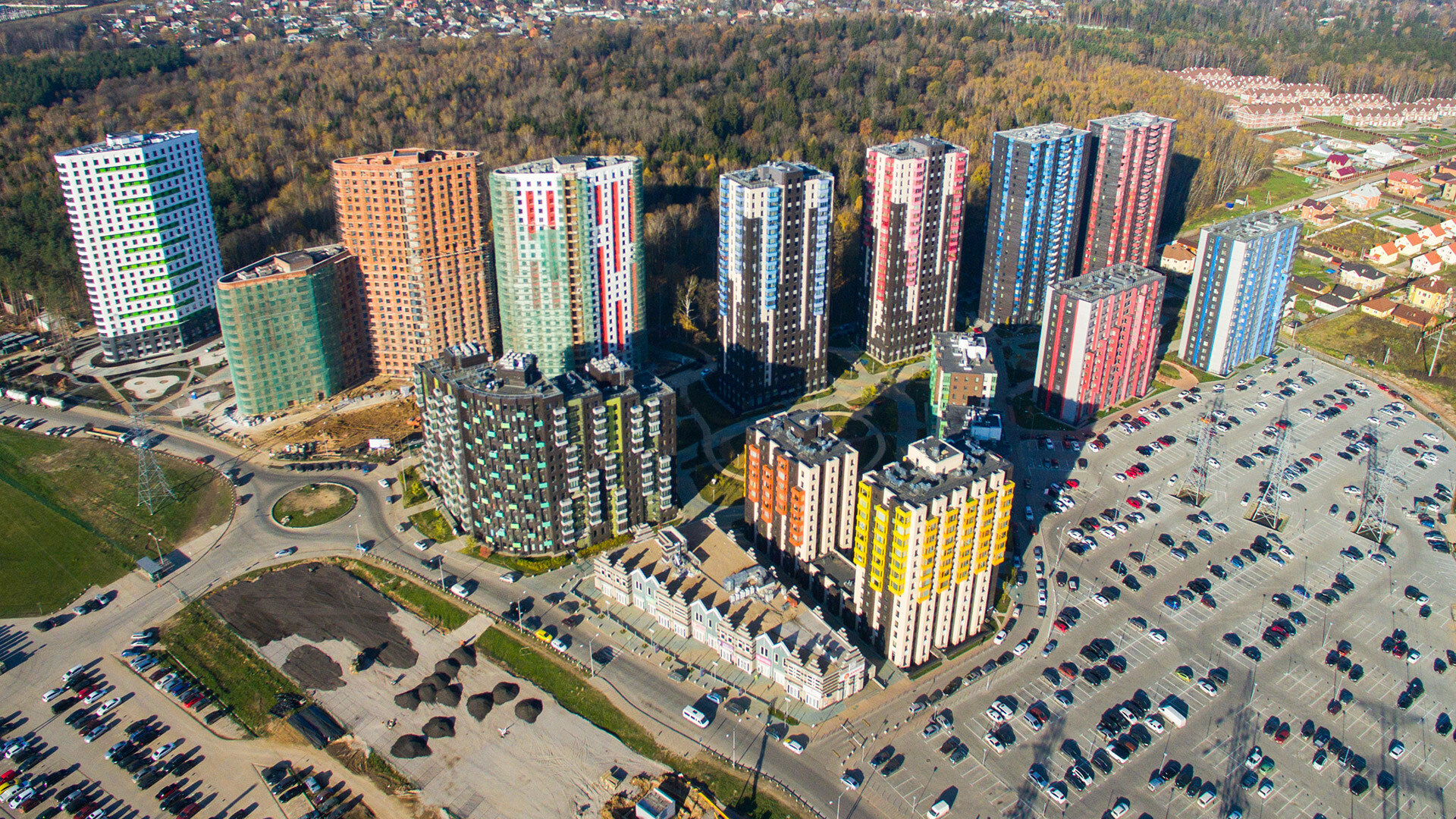 Bright new buildings can be found in Moscow… 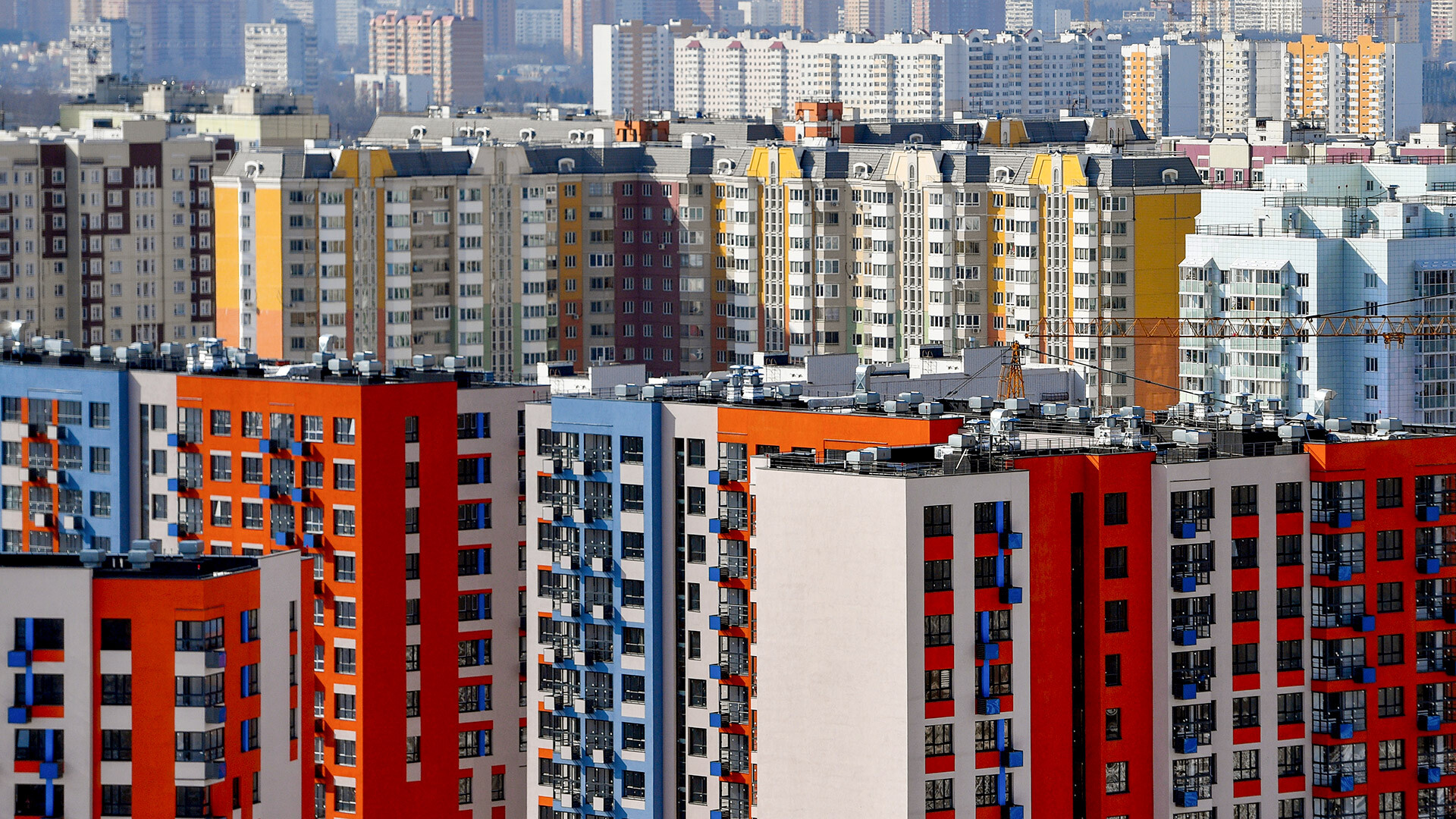 …as well as in St. Petersburg… 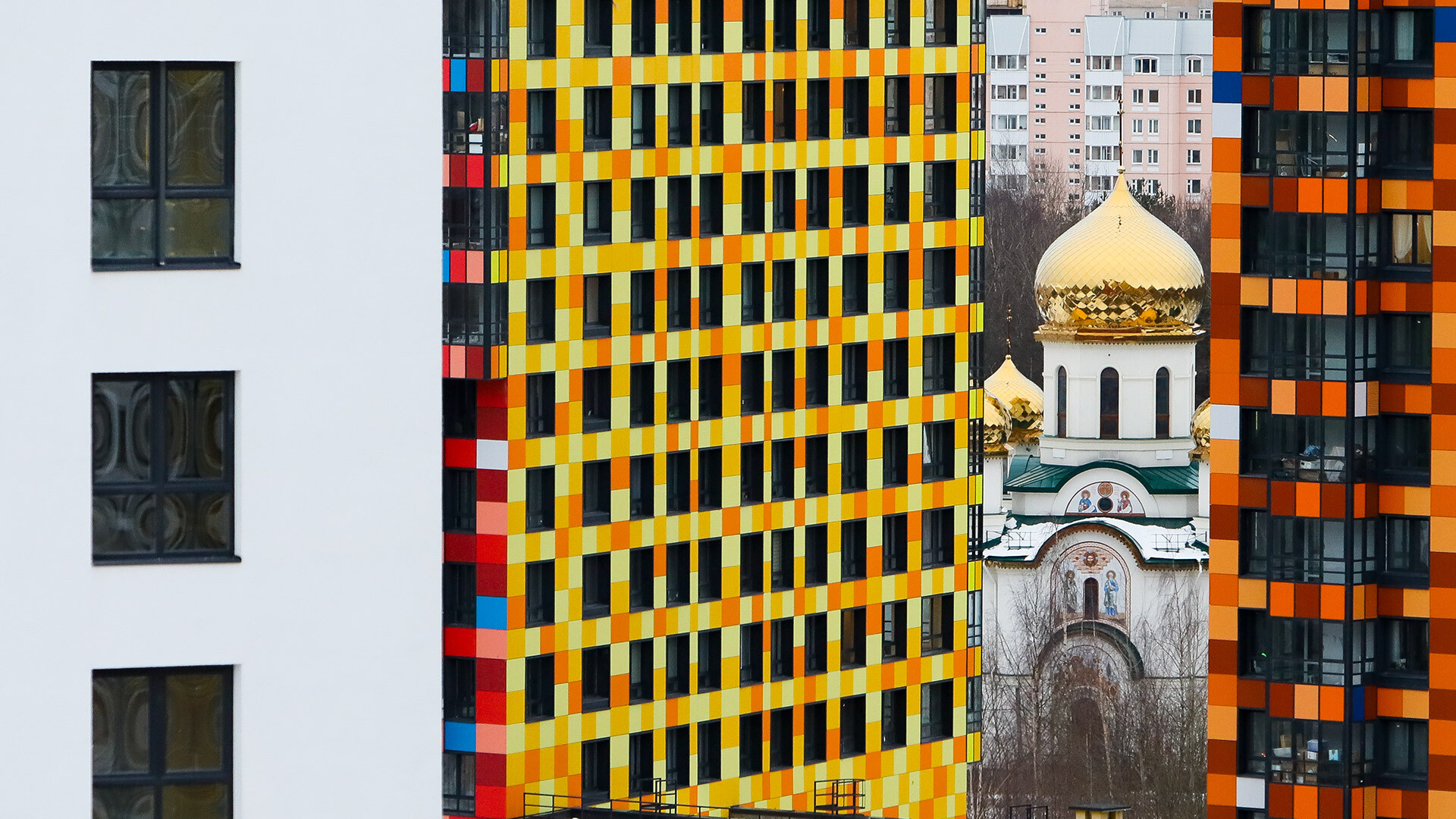 …and on the other side of Russia, in Vladivostok, for example… 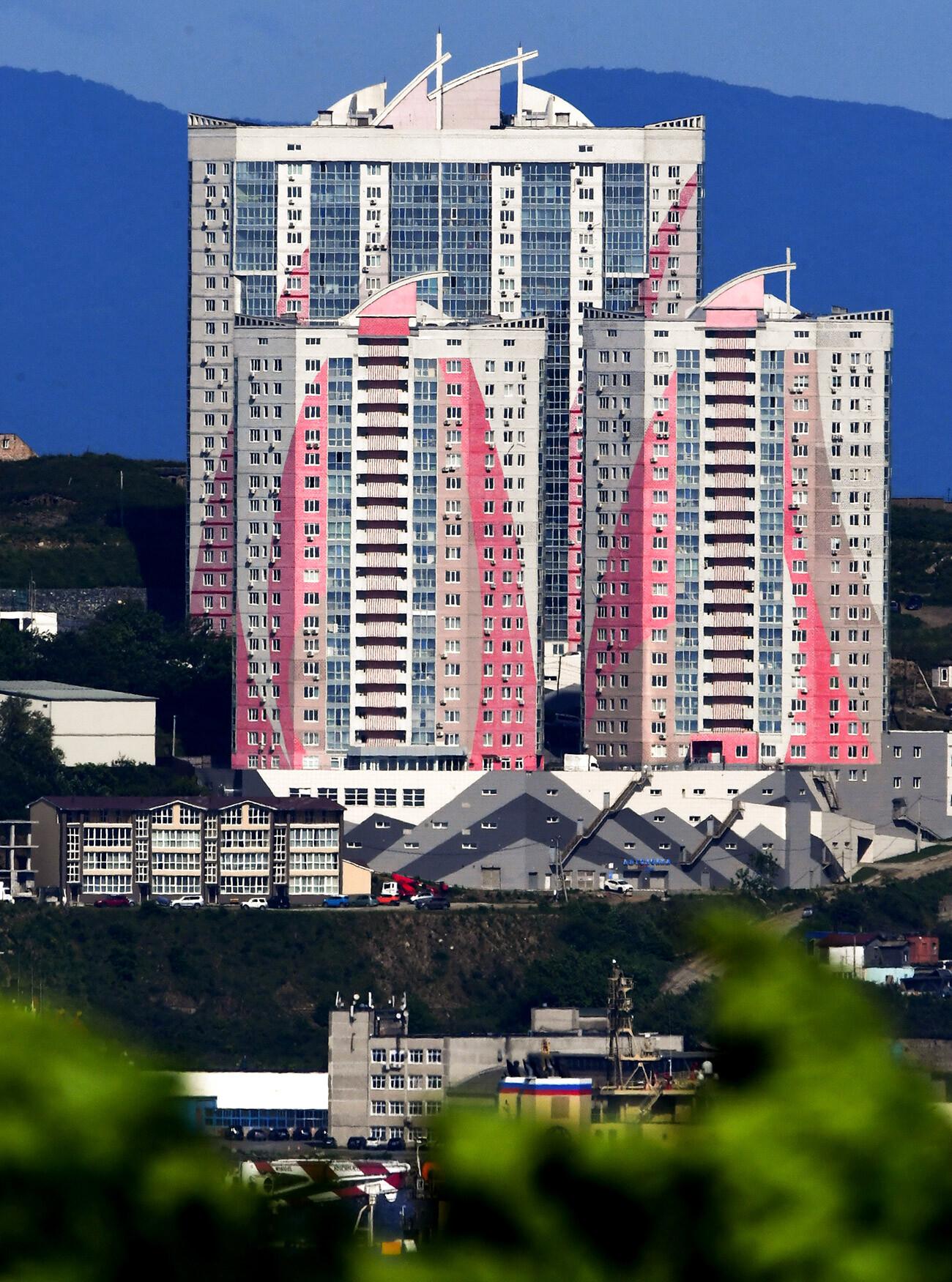 …and in the Siberian city of Novosibirsk. 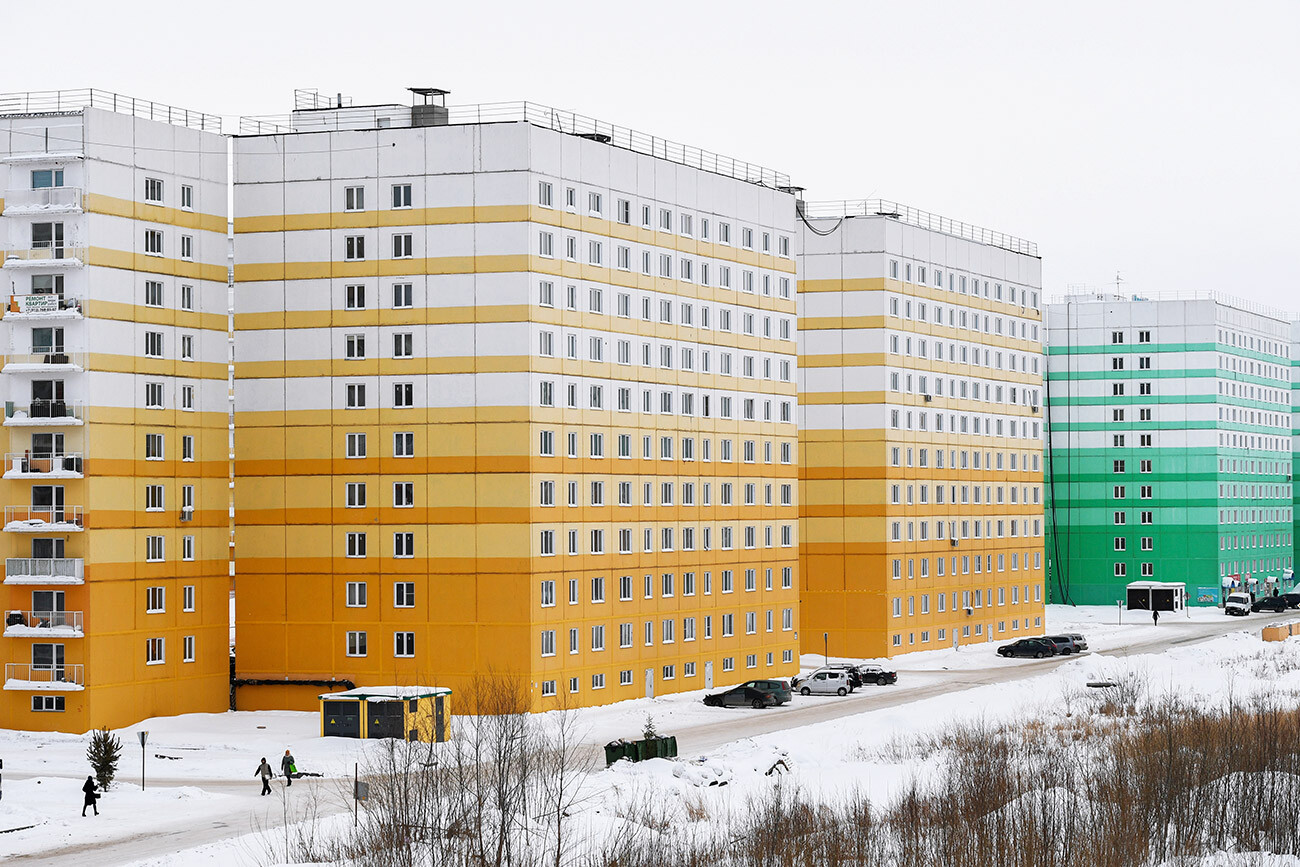 At the same time, old concrete or brick houses are quite often handed over to street artists, so that they decorate them with colorful graffiti and murals. 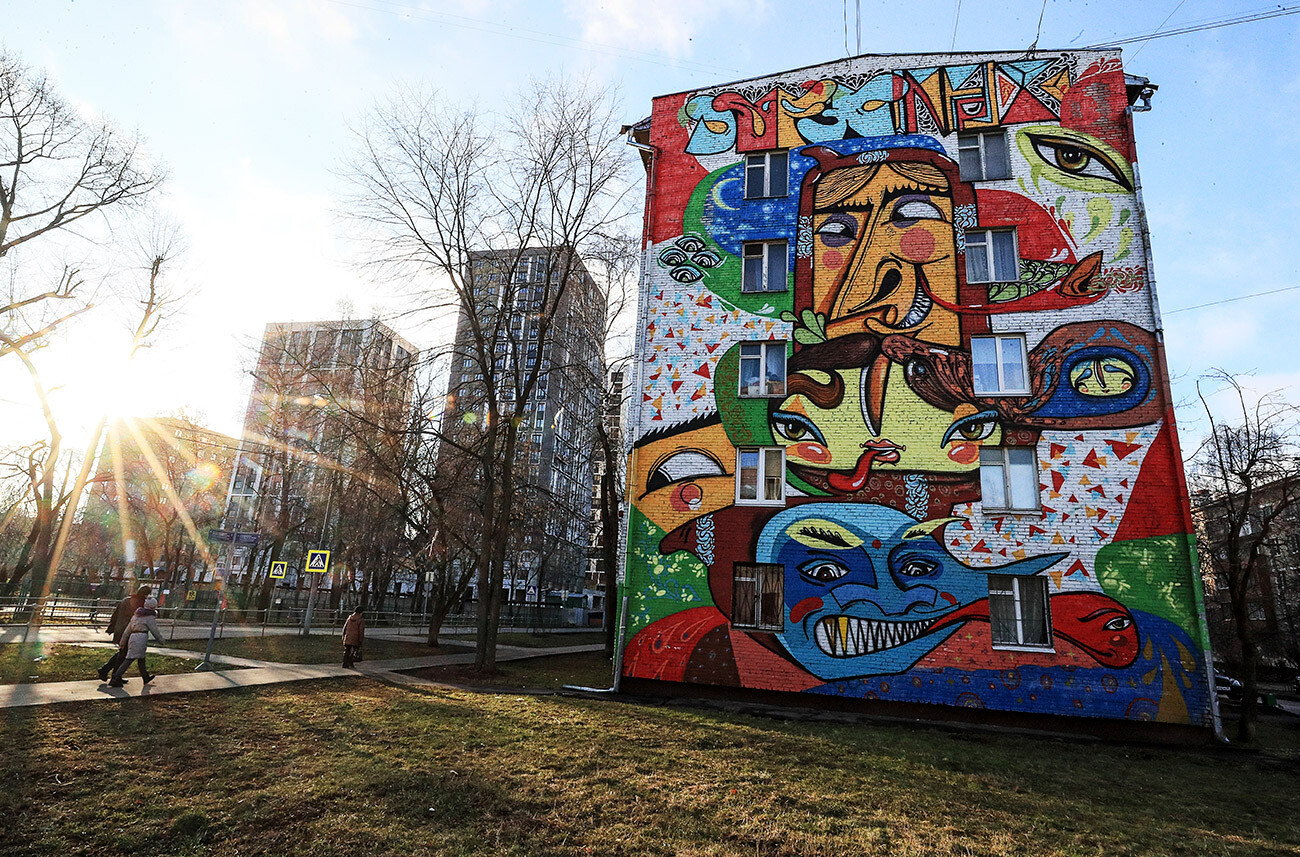 There are several reasons for the colorful “improvements” in Russia. First of all, officials and developers think that the buildings look prettier if they are painted with different colors. Monochrome architecture in muted tones is often criticized. 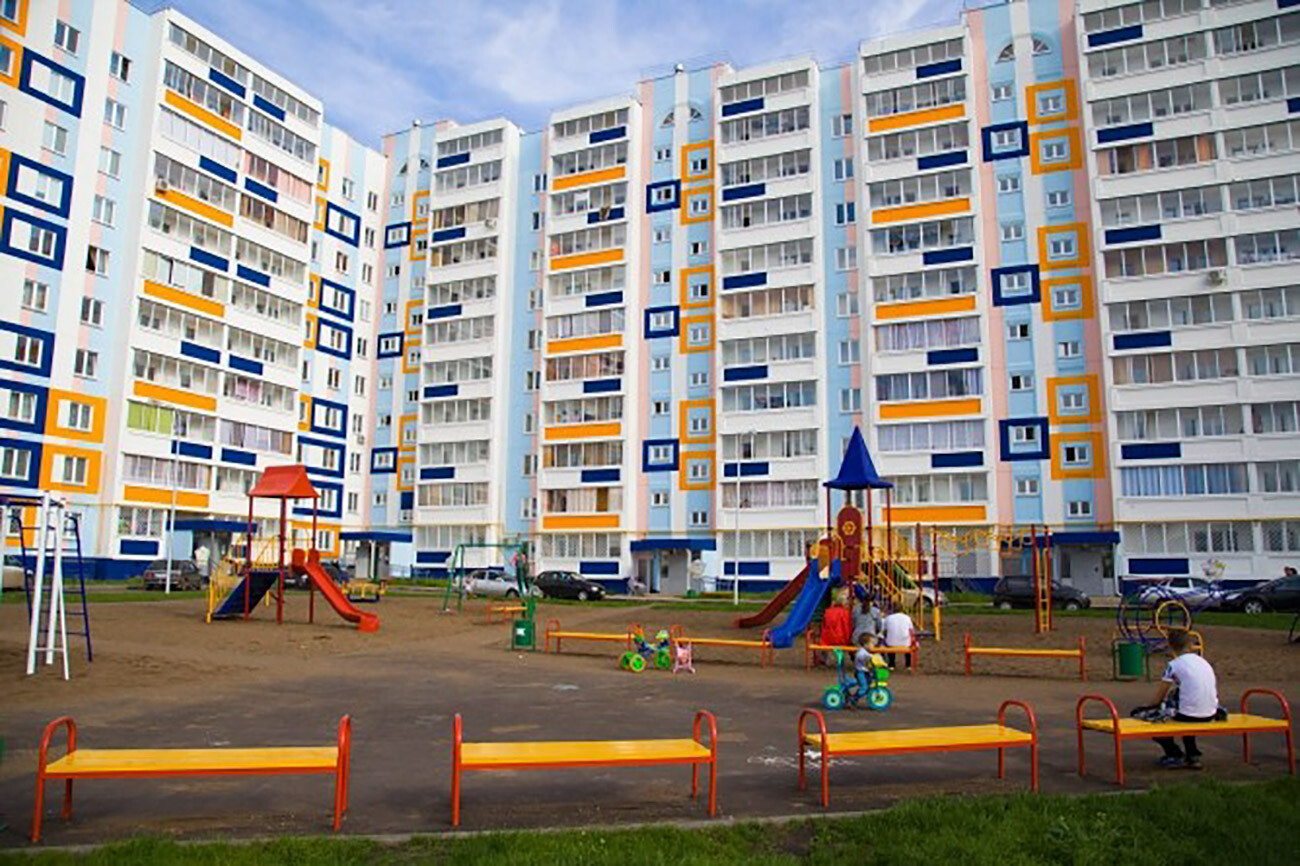 “What a beautiful house!” Rustam Minnikhanov, President of the Russian republic of Tatarstan, gives his verdict on another bright new building. “If it didn’t have these color solutions, for the balconies in particular, it would also be somehow gloomy and boring,” he says. 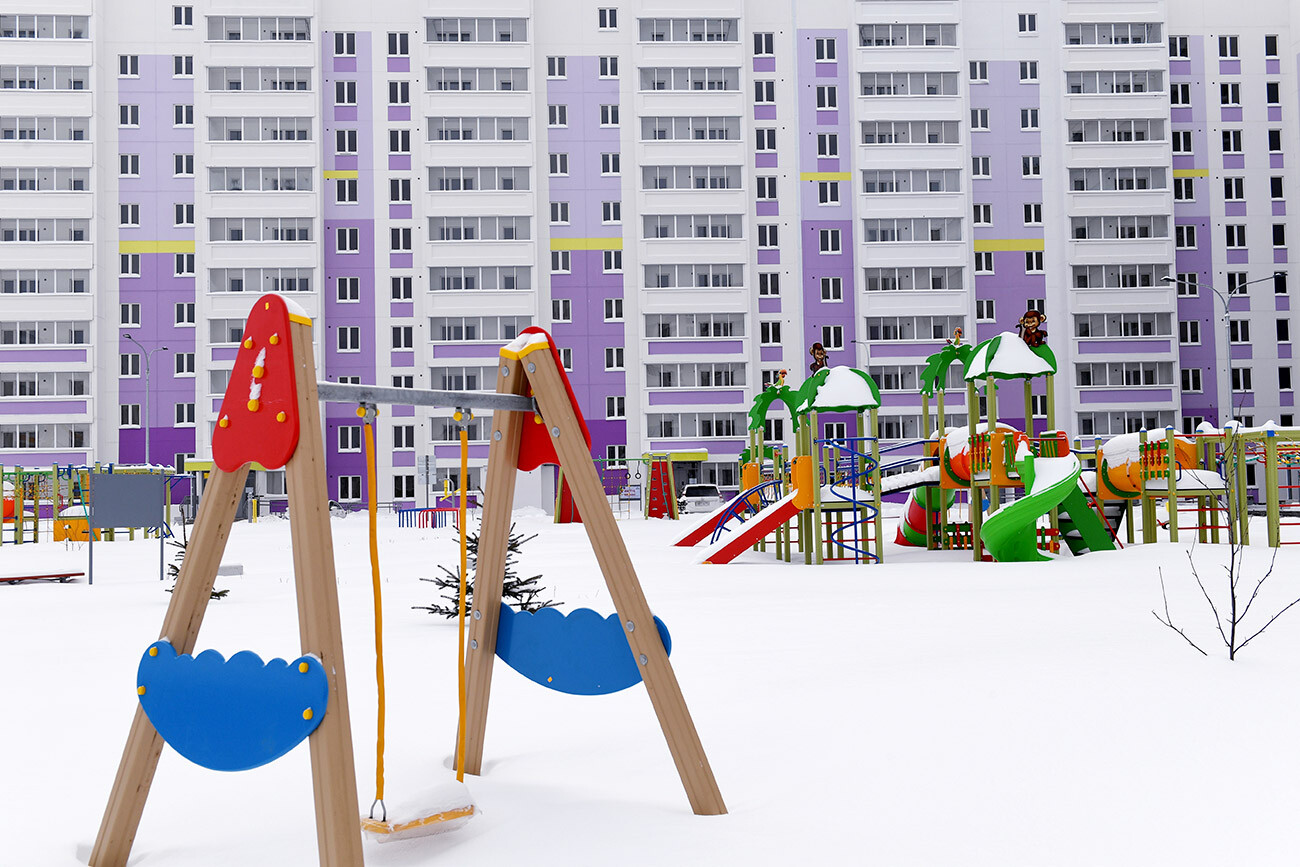 “With such a ‘gray’ environment, there would be a sharp drop in labor productivity at industrial facilities, fertility would drop in the residential environment, as well as milk yields in cowsheds,” an architectural official from the city of Naberezhnye Chelny echoes the head of Tatarstan. 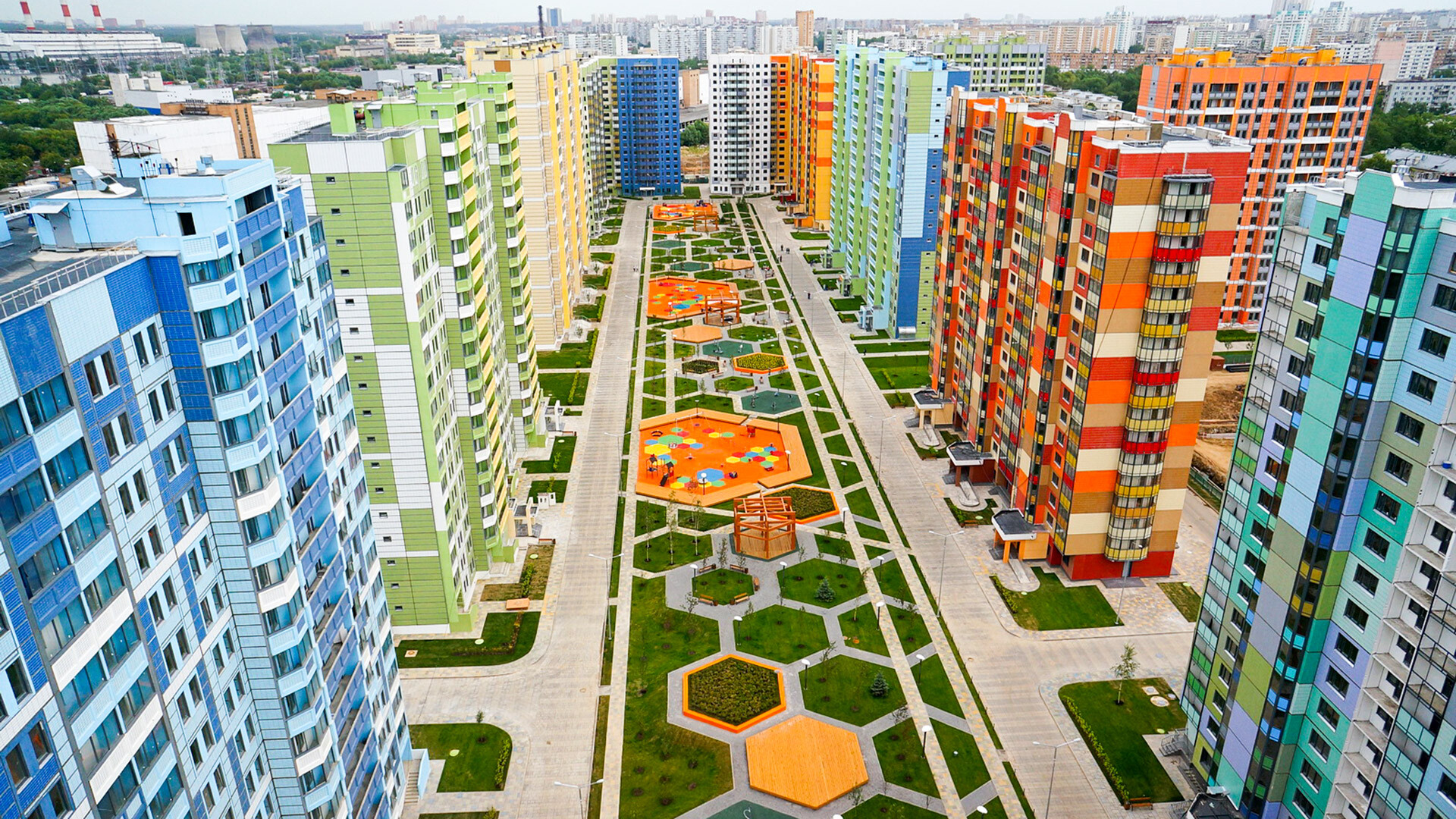 Certainly, bright colors are appropriate as accents or for some freestanding buildings (like this children’s hospital in Moscow pictured below). But, when an entire district is painted in many different bright colors, it’s more likely to be an eyesore. 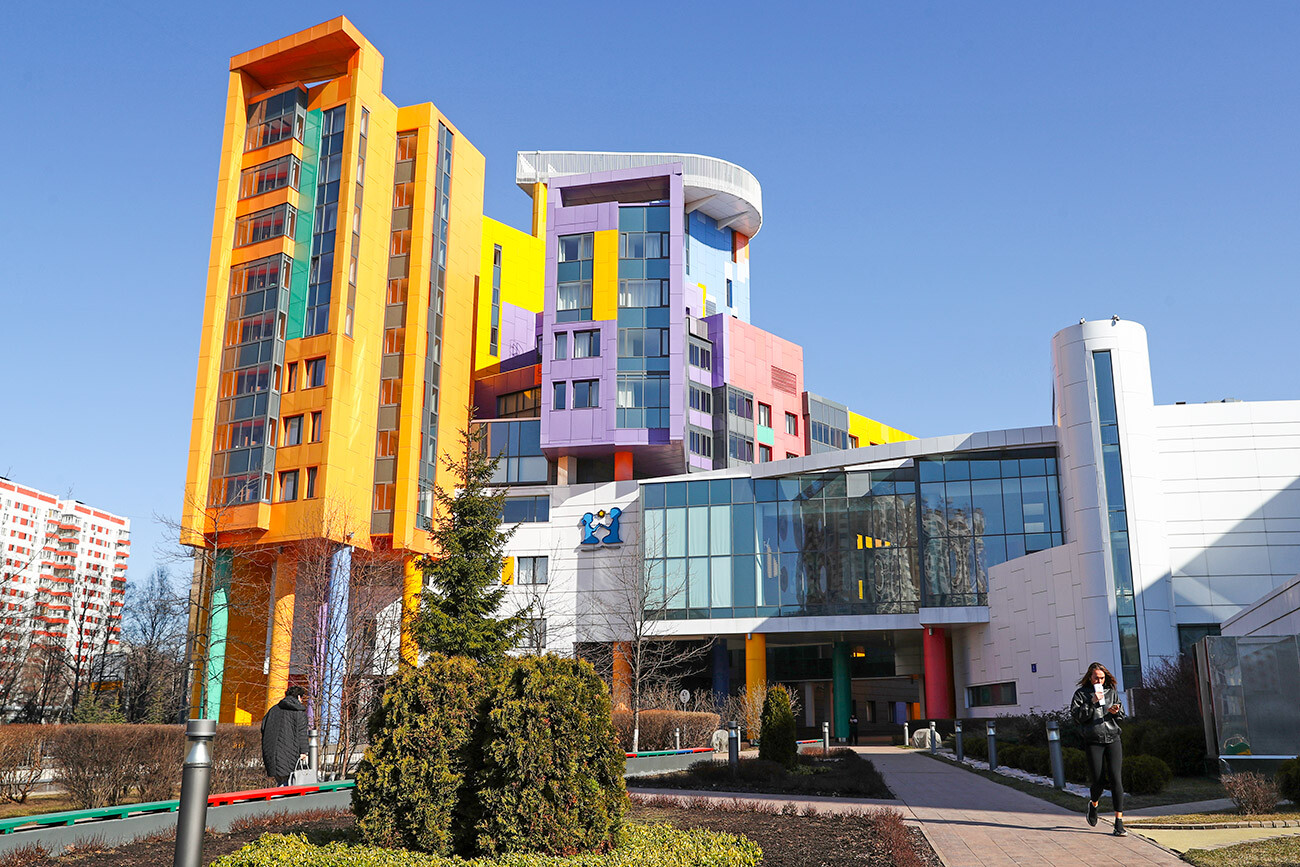 By the way, authorities insist that playgrounds and other facilities for children be multicolored. 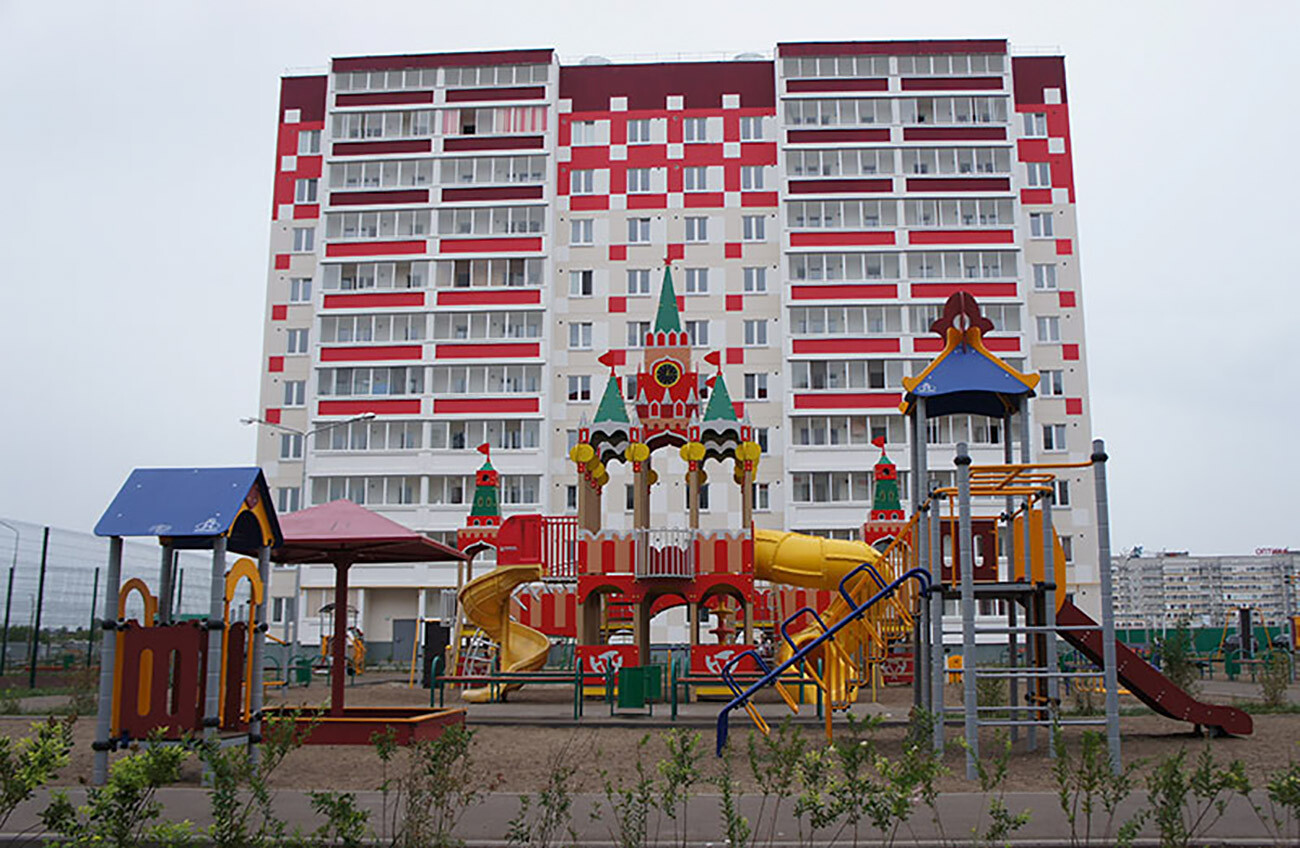 “Colors for schools and kindergartens are approved by officials, they even give us their brand books with preferences. Sometimes, we have to coordinate for a long time and it’s always very bright colors,” says the owner of a construction firm in Moscow Region. 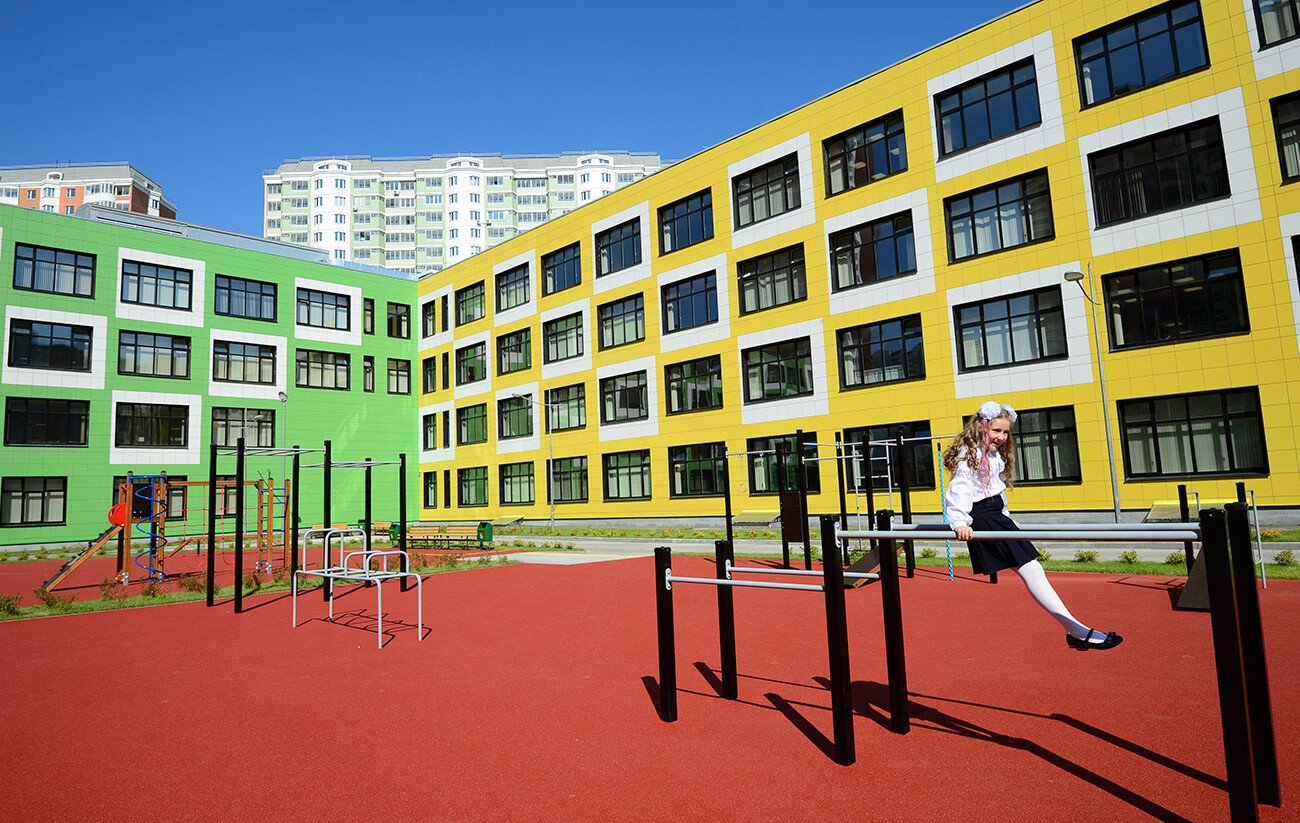 But, while bright houses are a matter of taste in Moscow or Kazan, in the far North, they are considered almost a necessity. For most of the year, people in the north observe mostly monochrome black and white landscapes, diluted with scanty green vegetation only for a short time in summer. Such landscapes can make people depressed, so the eye needs bright colors. 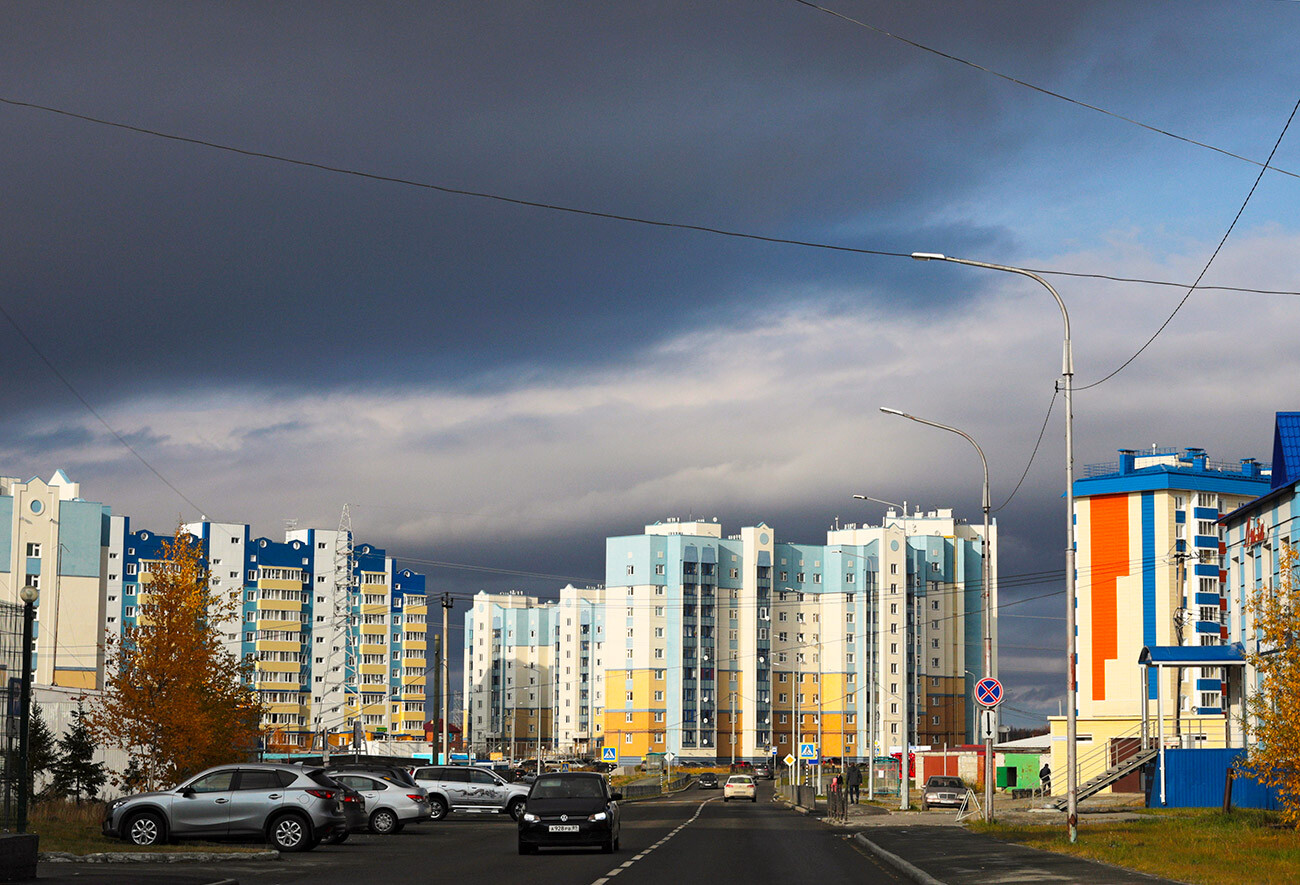 Since the late 1980s in the northern regions with harsh climates, houses have been painted in bright colors. For example, the city of Salekhard on the Arctic Circle (pictured above) and Anadyr in Chukotka (pictured below). 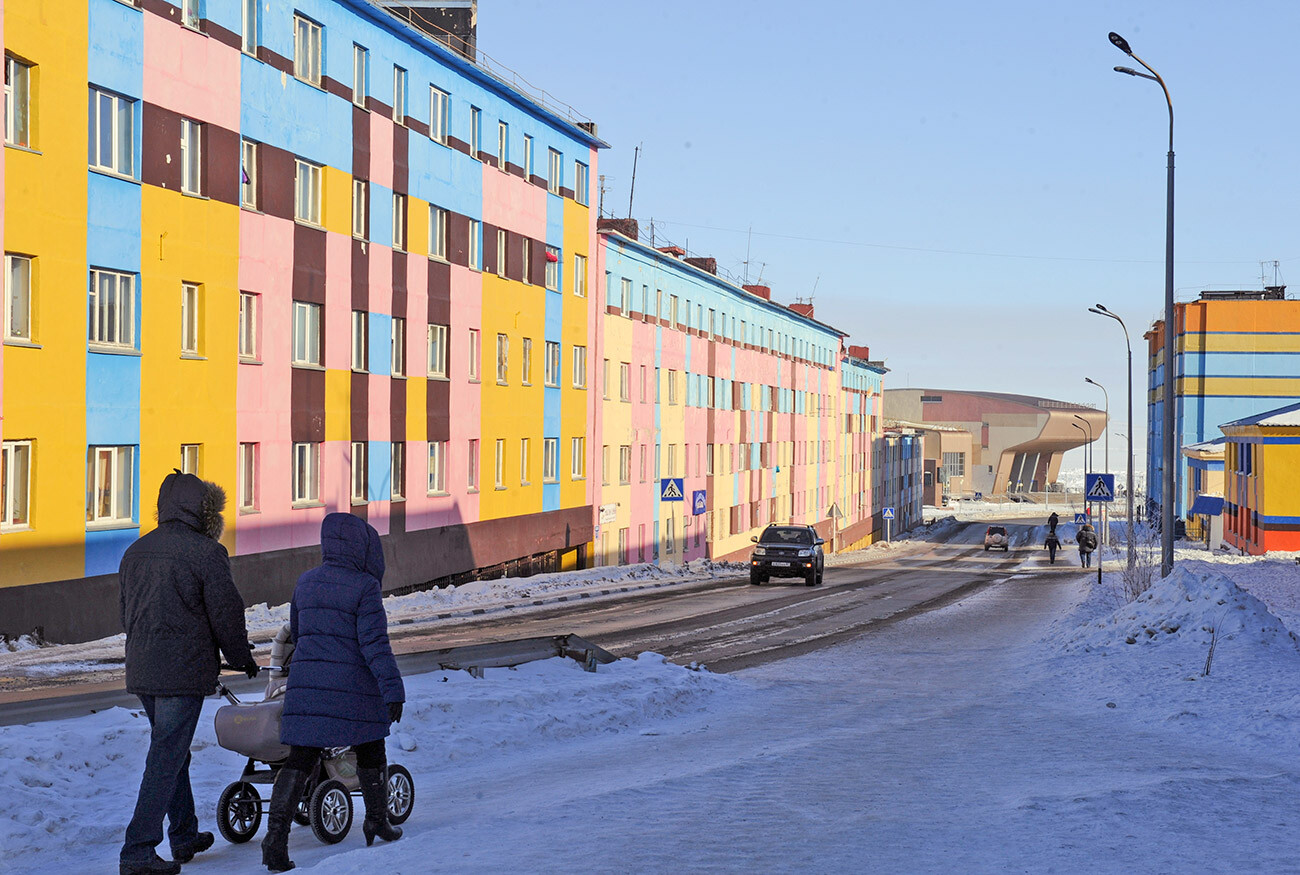 Moreover, colored houses help one navigate better during heavy snowstorms and snowfalls. This is especially true, for example, for the city of Norilsk (pictured below). 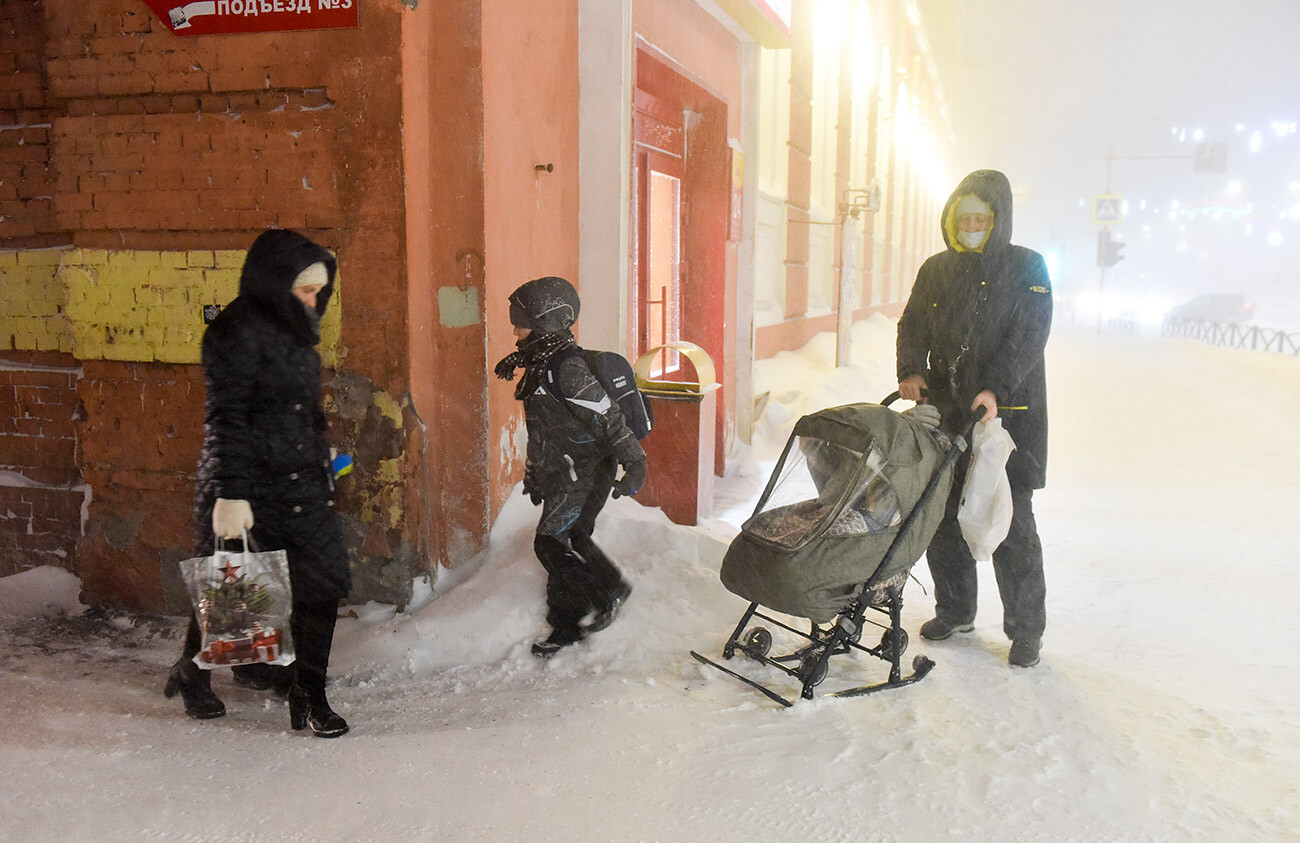 For this purpose, in Norilsk house numbers and street names are also written in very large letters. 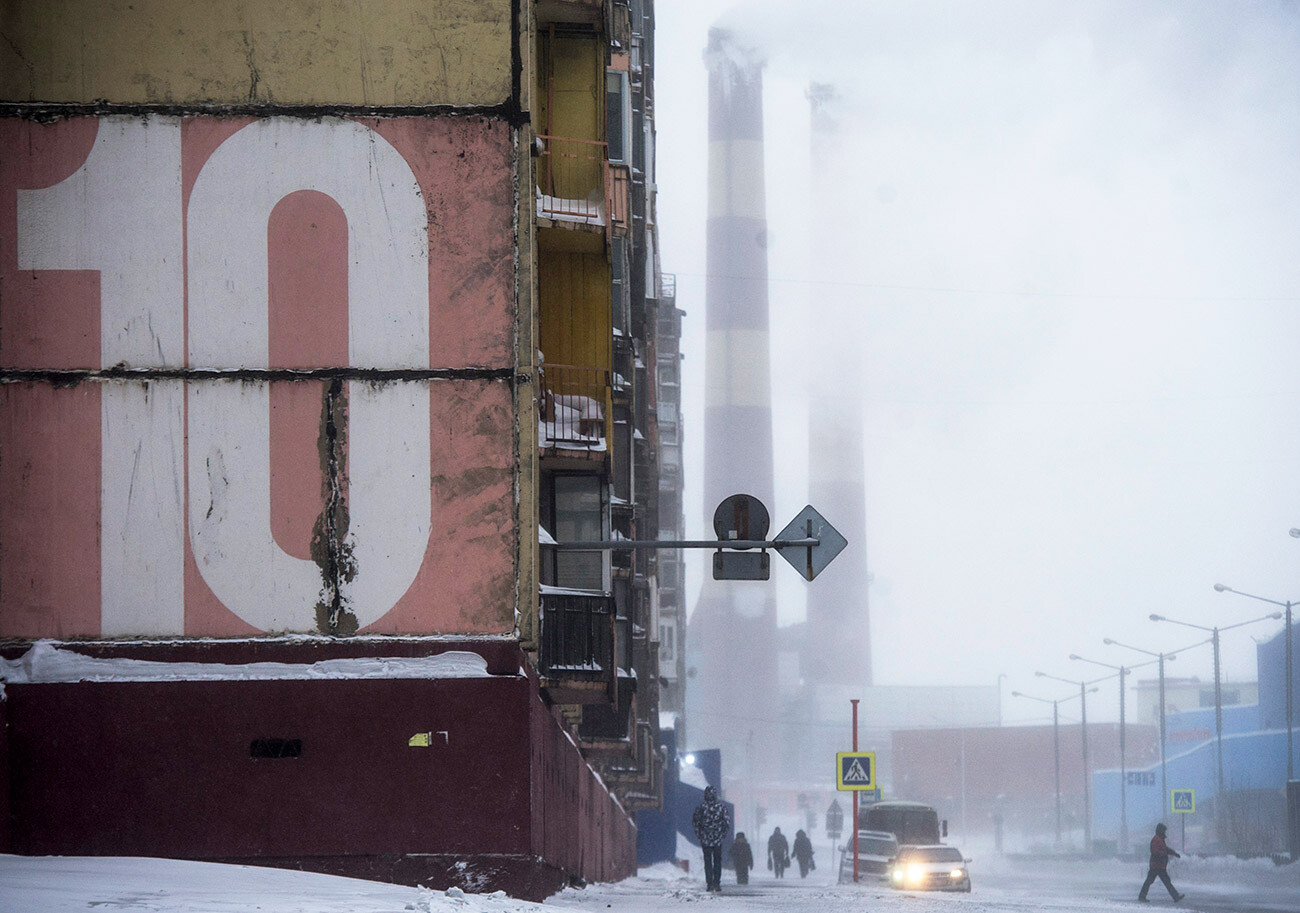 The facades of houses in Dudinka, the northernmost international seaport of Russia (pictured below), have also been painted in the most extraordinary colors. 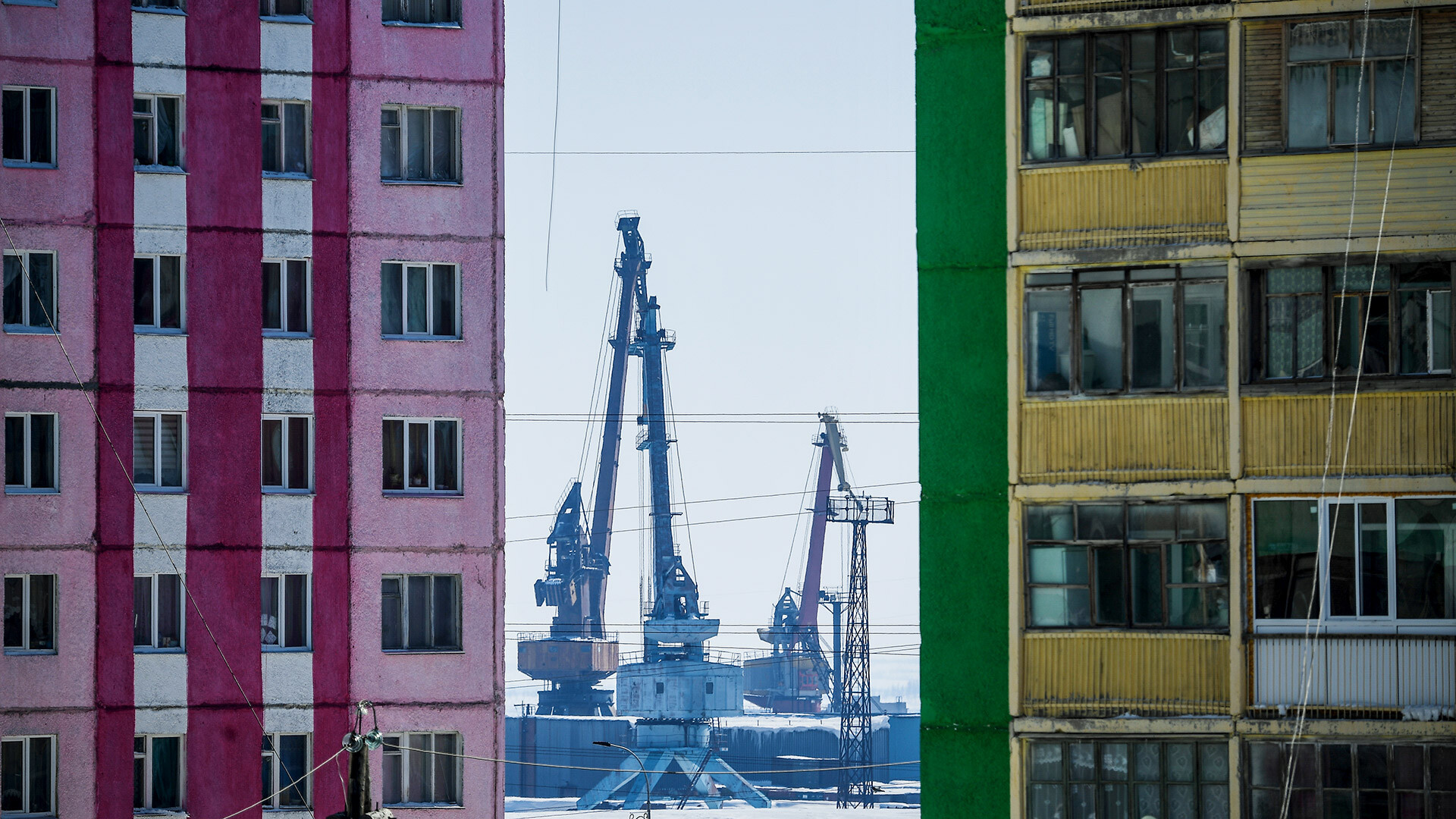 The problem of navigation was solved on Sakhalin Island with the help of street art. In one of the settlements, there are a lot of identical streets with identical houses, so bright murals help not to get lost and easily find the right building. 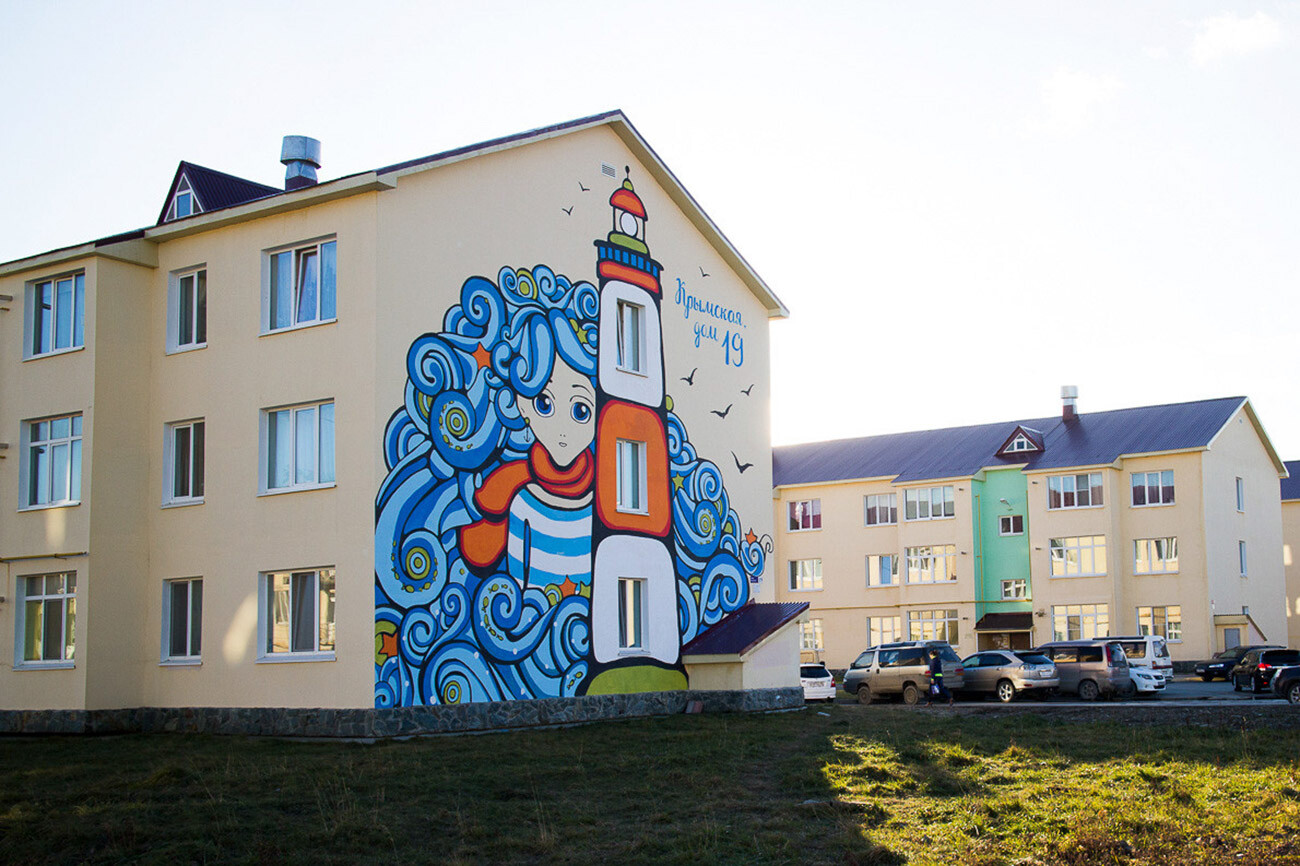 “The desire to make the brightly colored architecture is related to the psychology of Soviet people, who, today, still make key decisions: for a long time, the Soviet person lived in an environment of ‘infringed diversity’, in a monochromatic gray environment. Now, the time for color compensation has come,” says famous Russian architect Boris Bernaskoni.

However, the architect warns: “Color is a strong thing. You have to be very careful with it, otherwise it can lead to disbalance.” According to Bernaskoni, a serious problem in urban planning is the lack of an expert filter, which would help with proper color solutions. Modern developers still do not systematically work with architects, who as authors should lead the construction from the initial stage of the project to the final. 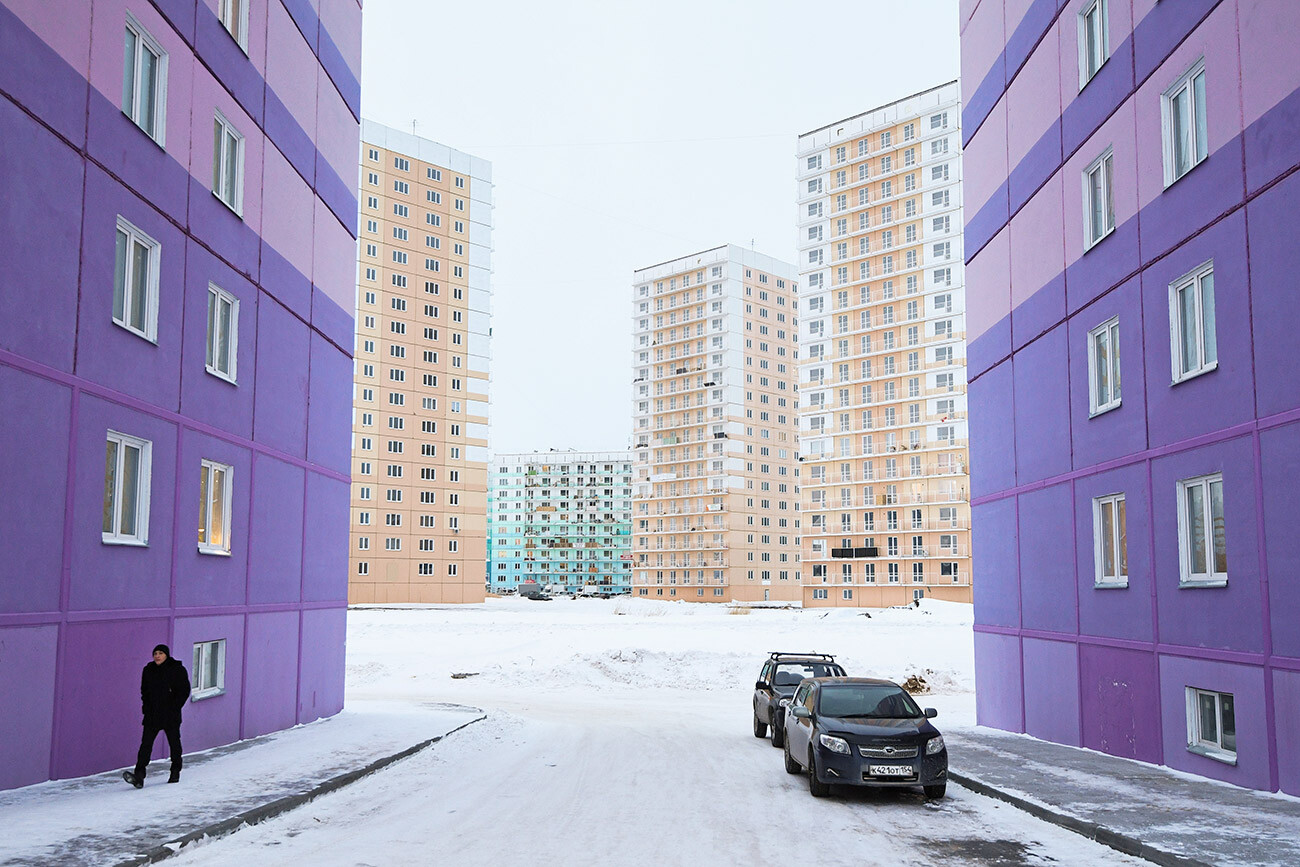 Comments online compare the painted houses to “fighting cocks” or to an ineptly made-up girl, who only spoils her beauty with “battle paint” (the photo above shows a residential neighborhood in Novosibirsk).

Residents themselves complain that the destruction and poor condition of the facade are often hidden behind the bright paint. 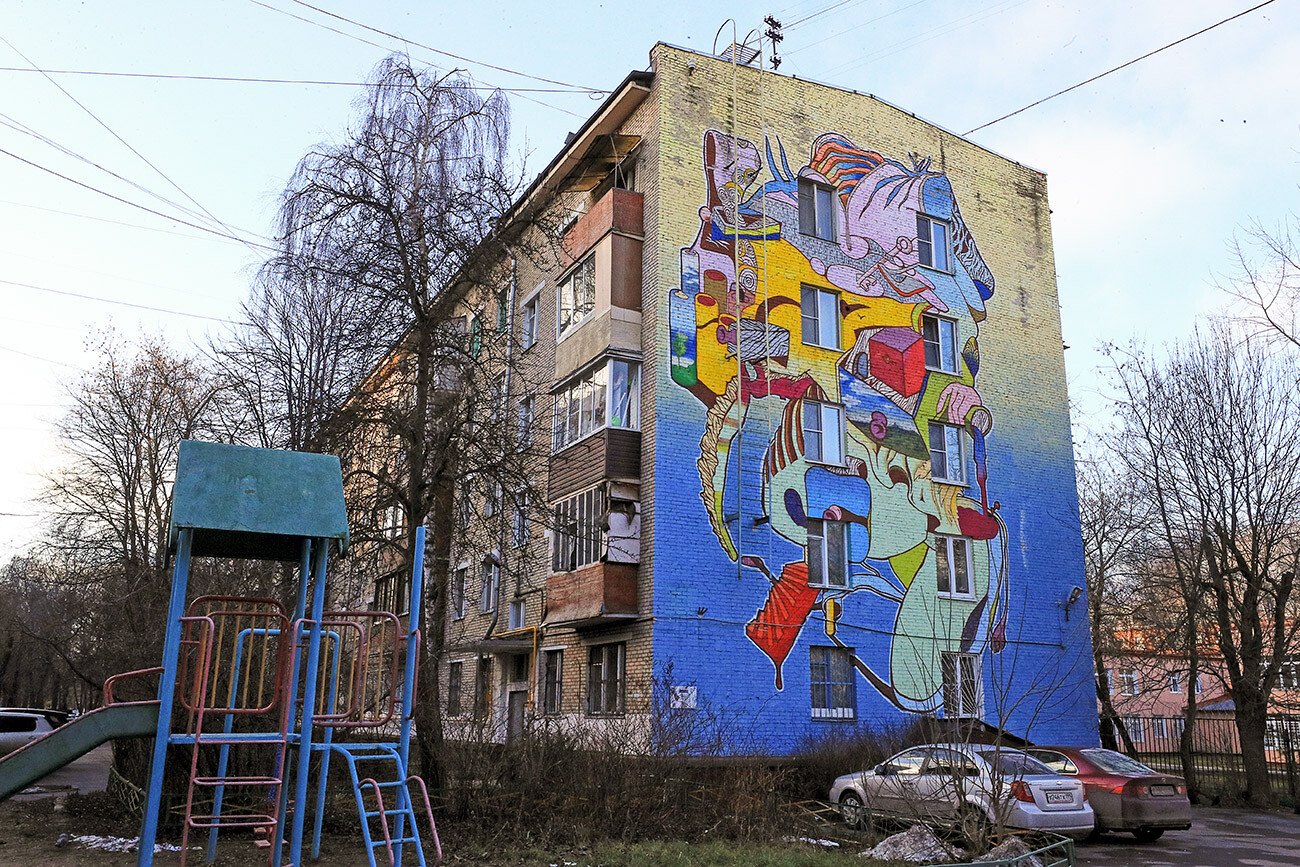 But, on the other hand… Do you remember what Russia’s most famous building looks like? “The aesthetics of the colored St. Basil’s Cathedral are in our genes. This is Russian architecture,” Boris Bernaskoni points out. 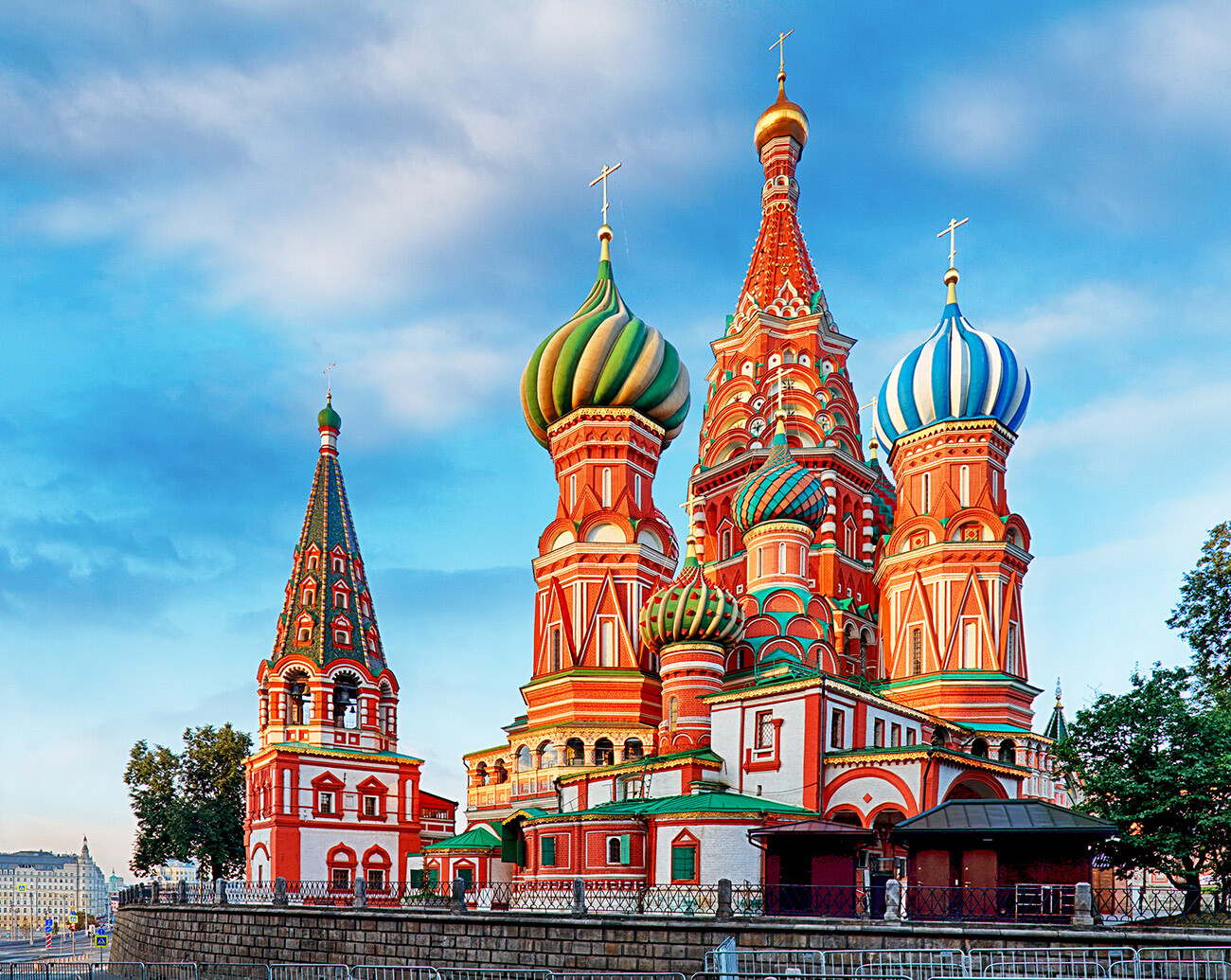 After all, even the outdated meaning of the word ‘red’ in the Russian language is nothing but ‘beautiful’. That is why the main square of the country is called the Red Square. 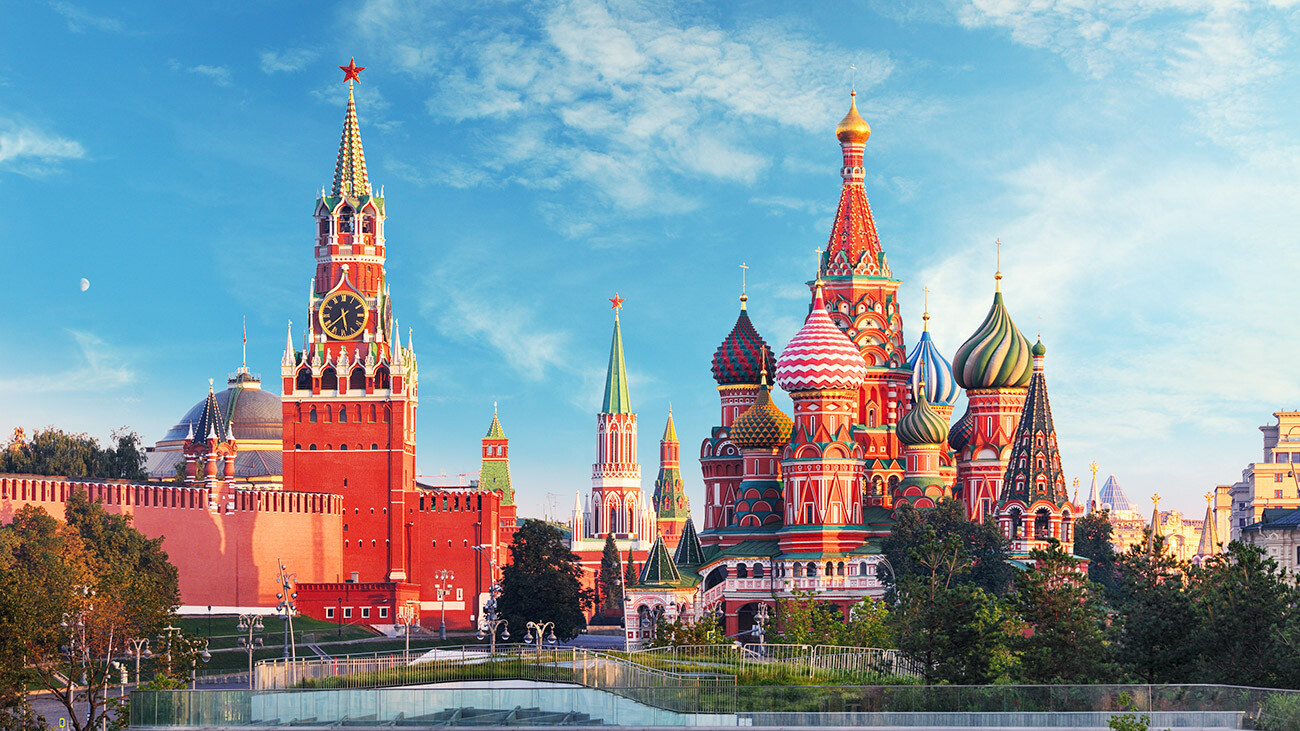