In awe of Aleksandr Blok 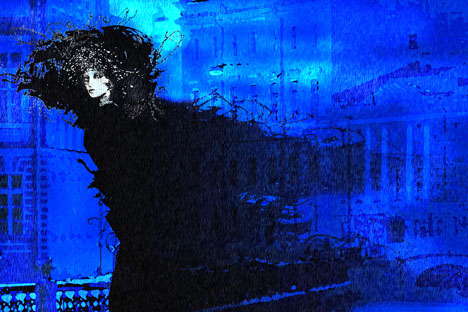 Blok was born 130 years ago in November, but his fervent duality is relevant today

I began reading Aleksandr Blok at about the time I began my divorce. Perhaps part of the hold Blok has on me is a matter of misery loving company, because Blok’s adult life and poetry reflected a difficult and complex relationship with his sweetheart-bride, Lyubov Dmitrievna, and a difficult relationship with the institution of marriage itself. During his courtship of her, Blok experienced Dmitrievna as his muse for an 8,000-line cycle of poems on abstract visions of the Eternal Feminine, or, as Blok called her, The Most Beautiful Lady. She was to him “the Russian Venus” who was imbued with “Impassive chastity and sorrow beyond measure.” He would wait for her incessantly and obediently, slave-like:

I wait for the Beautiful Lady

In the glimmer of icon light…

How familiar the flowing gown

of her Eternal Majesty!

She was a the impersonal pronoun, “Someone,” a shadow, a cloudy indistinct figure, more felt than seen, the more abstract the better, announced often by Blok in an azure blue haze or brilliant light. But in reality she was the inspiration of his adolescent love, a real human being, filled with youthful vigor and promise. Yet, she was his elevated beloved, for whom he would wait an eternity if need be. In my darkest hours I would read these idealized oaths from this most romantic and abstract period of Blok’s life, then close the book, switch off the light and sob uncontrollably.

Their courtship was platonic, but as soon as Dmitrievna had found a deserted chapel inside Kazan Cathedral where they could hide for long sessions of passionate kissing, Blok began to develop extreme schizophrenia. Perhaps the materialization of his dark double, “…my savage and diabolical second face…,” was his mind’s relief from guilt over having sexual desires and fantasies for the one he had raised up on such a high pedestal. This was the turn of the twentieth century and Freudian psychiatry was unknown, so Blok suffered self-torment as a result of believing he was uniquely beset with the vilest of thoughts. But Blok was also quite conscious of the hypocrisy within him, emanating a message to us to this day, "I seek the protection of Christ, But under my hypocritical mask My deceitful lips laugh."

Blok’s marriage, which he requested to be unconsummated for a year, was eventually challenged by a suitor to Dmitrievna, in the form of Andrey Bely. Blok’s response was to allow Dmitrievna to return the affection, in a mental if not physical menage a trois. But Bely did not take Dmitrievna away with him as he had promised, and instead, she returned to Blok, who took her back without question. This reunion began a pattern in their strained relationship of open courtship of others, separation, reunion and reconciliation, a pattern foreshadowing, yet more painfully honest than, today’s fragile marriages.

Blok was the undisputed leader of Symbolism during the Russian Enlightenment, a Mozart-like genius, who composed entire Symbolist poems in his mind, then copied them to paper in flawless form, and whose recitations lulled entire theaters of listeners into a collective trance, reportedly transporting them to a world beyond the physical. Blok’s Symbolism was powerful because it came from mystical visions. Gradually, the subject of his poems shifted from the idealized Beautiful Lady to the realism of the city, but his form remained complex, such that rhythm and the iambic beat and the sound of certain consonants and the use of repetition and alliteration created a numbing and euphoric sensation in the listener. While these technical qualities are lost in the translation to English, one can appreciate that building such structures, especially those with embedded symbols like those pioneered by Edgar Allen Poe, is an art, and that Blok was the supreme master of that art, even as he changed subjects to the city:

They will go in: and off they’ll blunder

Each to the load appointed him.

And men will laugh behind the windows

To see these paupers taken in.

When the revolution came, Blok embraced it, producing his greatest poem, "The Twelve," while ostracizing himself from his own gentry class, having predicted for years that all would be swept away. After that last song had been sung, Blok began a three-year decline. In the end, Dmitrievna, who had come back to him, stayed by his bedside. He had been in ill health for years and needed the clear air of the countryside in Finland to help him escape the typhus-infected St. Petersburg summer, but his request to travel was denied and delayed, until it was too late, with approval arriving just after he had died. Some say the delays were planned, making Blok the first intellectual to be murdered and martyred by the New Order.

Blok's life was as tragic as his work was brilliant, but that alone does not explain his attraction. Blok speaks to me about the duality in all of us between the moral and the immoral, our obsessions that lead to excess, and the search for happiness amidst affluence. He speaks of our crisis of faith and the desire for commitment within increasingly fragile relationships. All of this was against the background of a country with a widening gap between rich and poor, an overtly corrupt state church and an empire with the largest army in the world fighting a losing war in Asia.

Aside from the similarities between Blok's time and our own, there is also the whole phenomenon of the Russian Enlightenment, which cannot but excite anyone who discovers it. The SIlver Age, as it became known, exploded with writers, poets, painters, sculptors, composers, choreographers and scientists, all beginning work about the same time, and all producing masterpieces. Then, just as suddenly, the constellation of suns disappeared in the volcanic ash or war, revolution and terror.

I’m in awe of Blok’s life, his art and his late-found courage, which redeemed him and propelled him to the status of hero. One prophetic day, seven years before the revolution, Blok sat on a meadow hill and words came to him which I believe call to us across time, about our self-focus and indifference to inequity:

How often we weep, you and I,

Over our pitiful life!

Oh, children, if you only knew,

The cold and darkness of days to come.

Craig Nelson is at work on his first novel about Blok's life and times. You can find an excerpt of his novel at aablok.blogspot.com