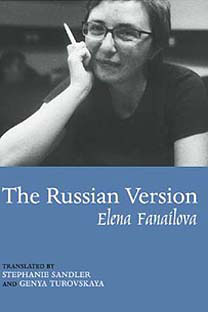 Her first collection of poetry in English, “The Russian Version,” (Ugly Duckling Presse) is a clamorous ride through her work from the last two decades. To little fanfare, it won the “Best Translated Book Award For Poetry” for 2010. The Prize is given by “Three Percent,” a resource and support group for international literature at the University of Rochester.

Like her ancestors in verse, from Tsvetaeva to Akhmatova, Fanailova makes the political personal. Firstly, her poems are about the words. In her book, she explains the genesis of one of the poems translated from her collection “Transylvania Calling.”

Fanailova was sitting on the bank of the Usmanka River in Voronezh—the city where she grew up. She listened to a family talk, and they talked about the husband’s training in Grozny, and how the roses there were “so big and black.” The husband and wife talked on, lightly and humorously, about how he came down with jaundice and that mugs full of magnesium was the only local treatment (that and wine at night).

The poem goes on to tell a horrible and grisly story, even considering the circumstance of war, that the husband recalls; Fanailova tells the brutal story as a poem with the lightest touch, speaking of “monstrous things in an ordinary way,” sending chills down the spine.

In other poems, she is a fierce and despairing lover: Her desire, obsession, lust, anger, fear, betrayal are all gas for her hot and uncontrollable word fires. Many of her poems are somehow reminiscent of the American women, feminist poets who tore through the suburban “Mad Men” lifestyle of America in the 1960s and 1970s. Most especially, she recalls Anne Sexton.

She defines Sexton brilliantly in “The Queer’s Girlfriend,” which ends “You are betraying me, you’re killing me/I will not leave you will not/let you go off and let you live your sweet, pathetic little life. /Don’t even think about it.” The poem has all the sweet revenge play, salty sarcasm and lack of inhibition that Sexton’s “For My Lover, Returning to His Wife” had in its day.

Fanailova has a second career as a radio correspondent for Radio Liberty in Moscow. Following the footsteps of Russia’s greatest writers, she studied medicine and worked as a doctor and university professor. She started writing poetry for cutting edge journals, and by the time she was discovered by the mainstream press, she was questioning the entire essence of her poetry. She has become known for pushing the known and unspoken boundaries of her trade.

In one poem, she writes, “Stop! No more, my love, no more/You’re like a bone in my throat, that’s to say/You’re like a dead relative for dinner/during the famine of Ukraine and Leningrad.”

One wonders if she isn’t speaking to herself here. There are moments in this collection when the poet’s conscience is so acute, her despair so deep, the future so grim that the reader does choke on the words: Fanailova the poet is one lovely bone stuck in the throat.