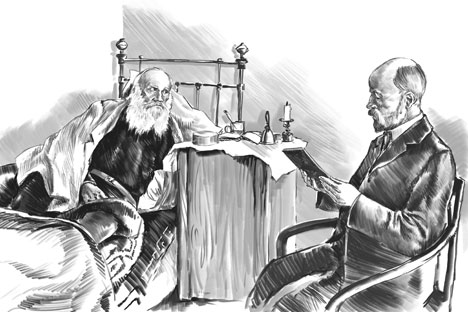 Shortly before his death, the great author fled his home at Yasnaya Polyana. A new and powerful book by Pavel Basinsky (Leo Tolstoy: Escape from Paradise – which last week won Russia’s 2010 Big Book award) describes the writer’s last days in moving and graphic terms. It reveals Tolstoy’s suspicions of his wife, his despair and his final moments. The book will soon be available in English translation. Here is Pavel Basinsky’s abridged article based on his book.

One hundred years ago Count LN Tolstoy fled his estate near Tula. In the middle of the night he left his house, accompanied by his personal doctor, Dushan Petrovich Makovitsky. It led to the death of one of Russia’s greatest authors, an event that would shake the world. This essentially personal drama heralded a catastrophic 20th century, as did the sinking of the Titanic, the start of the First World War and Russia’s October Revolution. Tolstoy’s journey from Yasnaya Polyana to the now famous station of Astapovo, to his death and return in a plain oak coffin to Yasnaya Polyana took all of 10 days. Let’s consider those days and how Tolstoy “left”…

Dr Makovitsky’s journal: “This morning, at 3am (October 28, 1910), LN in his dressing gown, in slippers and bare feet, woke me; his face was full of suffering, agitation and determination. ‘I have decided to leave. You shall come with me. But don’t wake Sofya Andreyevna. We won’t take much, only the essentials.’”

Poor Makovitsky didn’t realise that Tolstoy had decided to leave his house for good. Thinking that they were going to Kochety, the estate of his son-in-law Sukhotin, the doctor did not take all his money with him. He also didn’t know that that night Tolstoy had only 50 roubles in the bank and some coins in a purse…

“We travelled from Shchekino to Gorbachevo in a second-class carriage. But from Gorbachevo to Kozyolsk Tolstoy chose to go third class, with the simple folk. When he had taken his place on a wooden bench, he said: ‘How nice and free!’”

Makovitsky, however, was the first to sound the alarm. The Sukhinichi-Kozyolsk train was a freight and passenger train combined with one horribly smoky third-class carriage filled to overflowing. Tolstoy soon began gasping for breath. He put on his fur coat and fur hat, his high winter boots and stepped out onto the rear platform. But smokers were standing there too. He then went to the front platform; it was very windy, but deserted except for a woman and her child, and a peasant. Makovitsky would later call the three quarters of an hour that Tolstoy spent on that frigid platform “fateful”. Enough to make him catch cold.

Late in the evening of October 29 they arrived at the Shamardino Convent where Tolstoy’s sister, Marya Nikolaevna, had taken the veil two decades earlier. Tolstoy went straight to her cell. He found her with her daughter, Elizaveta Valerianovna Obolenskaya. The great Tolstoy now wept on the shoulder of one woman and then the other as he recounted his recent life at Yasnaya Polyana. How his wife had watched his every move, how he had hidden his secret diary in one of his boots and next morning found it missing. He told his sister and niece about his secret will, about how Sofya Andreyevna would steal into his study at night and rummage through his papers, and if she noticed that he was still awake in the bedroom next door, she would come to him and pretend that she had only come to find out how he was feeling.

Elizaveta found her uncle “pitiful and very old”. “He had his brown hood tied tight and sticking out from under it were wisps of grey beard.”

Like all stubborn men, Tolstoy was extremely mercurial in his moods and susceptible to outside influences. To change his view of the world was virtually impossible; it would require years of soul work. But to change his mood was no effort at all. Especially at a point when he was terribly unsure of the rightness of his action and even wrote to his youngest daughter Sasha that he “feared” what he had done. Early on the morning of October 31, Tolstoy fled Shamardino.

As soon as he descended from the train at Astapovo, Makovitsky went to the station master. He told him that “Lev Tolstoy was aboard the train and had fallen ill, he needed rest and must be put to bed”. The station master, Ivan Ivanovich Ozolin, Latvian by birth, Lutheran Evangelist by faith, had enormous respect for Tolstoy and his call to “do good” in everything. He agreed to take Tolstoy in. Once in Ozolin’s little house, Tolstoy refused to go straight to bed and sat for quite some time in an armchair. The next morning, November 1, Tolstoy felt better. He dictated a letter to Sasha: “God is the limitless All of which man realises himself to be a limited part. The truth exists only in God…”

Vladimir Grigorievich Chertkov, Tolstoy’s trusted friend and publisher, was the first to come to Tolstoy. Before the doctors, the priests, and even members of Tolstoy’s family. Tolstoy was glad to see them; he smiled and said kind things. Sofya Andreyevna and her sons were lodged in a separate carriage on another track. The three sons went into Ozolin’s little house and stood in the passage opposite the room where their father lay, but did not dare go in. Sofya Andreyevna longed for her husband, but her children and the doctors had collectively decided not to let her see him and to tell him nothing of her arrival in Astapovo.

The morning of November 6, Tolstoy sat up in bed and said: “I advise you to remember only one thing: There are a great many people on this Earth besides Lev Tolstoy, but you are looking only at Lev.”

When asked what he wanted, Tolstoy replied: “I want no one to bother me.” “He’s just like a little child,” said Sasha.

“I’ve never seen a patient like that,” said a doctor come from Moscow. When he raised Tolstoy up in bed to check his breathing, Tolstoy hugged and kissed him.

In addition to his death throes (“How LN cried out, how he tossed, how he gasped for breath!” wrote Makovitsky on November 6), Tolstoy was also tortured by the fact that the people around him could not understand something very important that he was trying to say. LN never did manage to say that most important thing. His last intelligible words, articulated just hours before he died, to his eldest son were: “Seryozha… the truth… I love many things, I love all people…”

“Throughout his last illness,” Alexandra Lvovna (Sasha) later recalled, “I was amazed that despite his fever, his very much weakened heart and terrible physical suffering, Father’s mind remained extraordinarily clear. He noticed everything that was going on around him, to the tiniest detail.”

This clarity of mind combined with the inability to articulate what he wanted to say was enormously painful to Tolstoy, as painful as his physical suffering.

In addition to camphor, the doctors injected him with morphine. How Tolstoy hated drugs, how he feared them. Anna Karenina, remember, fell under a train after taking a double dose of opium.

After the injection of morphine, which Tolstoy resisted, he began to breathe with even more difficulty. Feeble and half delirious, he muttered: “I’ll go somewhere where no one can bother me… Leave me alone… I must run away, run away somewhere…”

It was only at this point that Sofya Andreyevna was allowed to see her husband. “First she stood there, looking at Father from a distance,” Tolstoy’s son Sergei Lvovich later wrote. “Then she walked calmly up to him, kissed him on the forehead, got down on her knees and said: ‘Forgive me…’”

About 3am on November 7 Tolstoy regained consciousness and opened his eyes. Someone brought a candle up to his eyes. He squinted and turned away. Makovitsky offered him a drink of water. Tolstoy took one sip. After that there was only the sound of his breathing. At 6:05 that morning, Tolstoy died...