Pulp fiction goes out of fashion 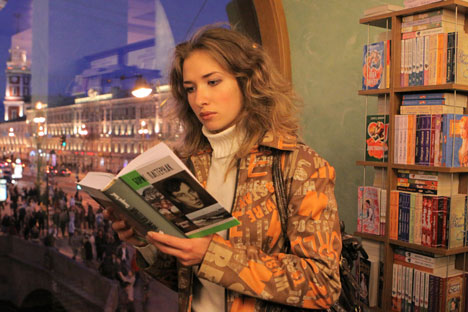 Eyes down: the appetite for cheap potboilers is waning, and Russia’s readers are returning to more challenging fare. Source: PhotoXpress

A new generation of adventurous Russian writers is winning readers as the audience for cheap thrillers turns to television.

The first decade of the 21st century saw a sea change in the publishing business in Russia, with heavyweight publishers finally showing an interest in “serious” literature rather than just lucrative potboilers.

In the Nineties, they had ignored it pointedly, as evidenced by their shunning of proliferating literary prizes such as the Russian Booker, the National Bestseller, Yasnaya Polyana and the Big Book. It was assumed that professional critics and writers awarded prizes to the kind of literature that had no interest for the mass reader. Conversely, over that decade the mass reader was interested in literature that professional critics considered beneath them.

The 2000s, however, saw a change in the social, economic and cultural environment in the country. Less choosy readers who consumed cheap literary products (in the literal and the figurative sense) – thrillers, whodunnits, “women’s novels” and fantasy – hastily written, often by ghost writers, soon switched to watching soap operas and Hollywood movies on television.

By contrast, “serious” readers remained loyal to more ambitious literature, even in times of economic hardship, willing to spend their last rouble to keep abreast of the latest literary trends.

Most of these stalwart devotees are women, which is another major sign of the times. One of the most popular novels to be published in the past two years bore the symbolic title The Time of Women, and its author, the St Petersburg university professor Elena Chizhova, was catapulted to fame by winning the Russian Booker prize in 2009.

Women in Russia read more than men for many reasons. Housewives often have more free time to read. Plus, a majority of school and university teachers are women, and reading is an essential part of their job.

For a career woman, reading is important because, even in the world of literature, she tries to be head and shoulders above the men with whom she has to compete in the workplace.

Perhaps unsurprisingly, women writers are more popular with women readers. That accounts for the popularity of the novels by Dina Rubina (who lives in Israel but writes in Russian), Lyudmila Ulitskaya, Tatyana  Tolstaya, Elena Chizhova, Olga Slavinkova, Elena  Katishonok and others,  not to speak of the recognised queens of the woman’s detective story, such as Alexandra Marinina, Tatyana Ustinova and Darya Dontsova. The unexpected success of Oleg Dorman’s Verbatim , based on the author’s documentary on the well-known Russian translator Liliana Lungina, probably owes much of its popularity to the fact that it is a female confession, in which a woman’s voice is clearly heard.

The novels of Viktor Pelevin and Vladimir Sorokin, who broke into the big time in the Nineties, were still popular in the 2000s, suggesting that they have a loyal following that did not abandon them even during the crisis. To read a new novel by Pelevin or Sorokin is a hallmark of belonging to a certain intellectual milieu – whether you like the novel or not.

In Russian literary circles, it is important to have read it in order to maintain your credentials as a serious reader. In short, being an active reader is still fashionable in Russia, and keeping up with the works of writers such as Pelevin and Sorokin means that you are “with it”.

Yevgeny Grishkovets is another fashionable writer. Especially popular with Russia’s rapidly expanding middle class, Grishkovets caters to the upper bracket of male readers, those with sleek new cars and chic new apartments – basically upwardly mobile men who want to read about their own lives, described elegantly and ironically by a talented and trendy author.

Another key development in the 2000s has been the emergence of a strong generation of thirtysomething authors, such as Zakhar Prilepin, Alexei Ivanov, Roman Senchin and Dmitry Novikov. Their style is, for the most part, realistic, psychological in a traditional way, and they do not shy away from describing social problems and provincial and rural life. The undisputed leader of that generation is Prilepin, a native of Nizhny Novgorod who conquered the Moscow literati with his novel Sanka, about a young rebel against the new capitalist rules, the new “masters,” to borrow Maxim Gorky’s expression. Edgy and sophisticated, Prilepin’s firm grip on the realities of life may stem in part from his work as a prominent opinion-page writer in the national media (read his article on page 6).

Another leader in that generation of writers is Alexei Ivanov from Perm, who made his reputation with the novels The Gold of Revolt and The Heart of Parma . Today, he devotes his energies  to ethnographic studies of  his native Urals, an area he calls “Russia’s backbone”.

Roman Senchin has written an excellent novel called The Yeltyshevs , about an ordinary Russian family that disintegrates under the new economic conditions. The theme of social degradation makes good literature when handled by a talented writer, such as Emil Zola, Maxim Gorky or Ivan Bunin (in his story The Village ), and Senchin ably rises to the challenge.

Another trend in modern literature is a revival of interest in the biography genre. The Lives of Achievement series has established writers examining the life and craft of their predecessors. Among these titles are Boris Pasternak and Bulat Okudzhava by Dmitry Bykov, Mikhail Prishvin , Alexandr Grin, Alexei Tolstoy, Mikhail Bulgakov , and Andrei Platonov by Alexei Varlamov, Sergey Dovlatov by Valery Popov.

The series owes its success both to the wide range of subjects and the high reputations of the biographers, whose judgements readers have found reliable.

Pavel Basinsky is a prominent Russian critic, writer and winner of the 2010 Big Book Award for his biography of Leo Tolstoy.