Pirates, profits and turning the page  in the digital era 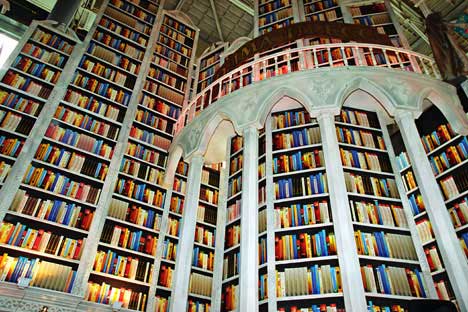 Interview with Vladimir Grigoriev, deputy head of the Federal Agency for Press and Mass Communications

Is the Russian book market  currently undergoing a crisis?

I have been working with books on a professional level for 25 years. I can’t remember a single year in which some publisher didn’t lament how bad everything is. And despite all the technological revolutions that allegedly threaten books, despite the emergence of sound recordings, radio and television, the book lives on.

The book market should not be considered separately from the media market or the country’s economy. The global crisis erupted in 2008 and our segment of the economy is slow to respond. The book publishers managed through the first half of 2009 and everyone began having problems later that summer. The book industry is one of the last to be affected by the crisis and one of the last to emerge from it. This was the case in [the financial meltdown] in 1998, when the market experienced a very difficult time recovering.

Is the growth in electronic  literature a good thing?

It’s good from the reader’s perspective. It requires that publishers and the authorities take a systematic approach to creating a new market. At present, 80pc of texts travelling in the Russian segment of the internet are pirated. If the market is organised, systematised and regulated, then neither publisher nor author suffers and books cost less for a reader because printing and paper expenses are removed from the overall cost. A system should be created in which authors and publishers get what they are entitled to.

And how should this system  be created?

There are two important factors here. On the one hand, after 70 years of Soviet rule, we are used to compensating for the severity of the law by disobeying it. This is why a person who was raised in Soviet times has the mindset of “The government has always stolen from me, so why should I pay somebody for something?” This is how we ended up in the current situation. An identical situation is currently taking place in the audio and video industries, while the same thing happened with the video market in the Nineties. We need to educate the law-abiding population and create an atmosphere in which stealing is not considered cool. In principle, more than half of the population is prepared to pay  reasonable money for electronic books. On the other hand, a normal system needs to be created where people who want an electronic text don’t jump around from site to site and put their credit cards at risk.

But who should be in charge of all this, the government?

The government will facilitate and contribute to this process, but the main initiative should come from the market. The book-selling companies and the publishers will serve as the basis for the creation of a normal system of relations between consumers and manufacturers.

All kinds of people are currently fighting against copyrights in their current form. There are people who don’t want to pay publishers and those who believe that art belongs to everyone. Then others argue that the only way to save the country from an onslaught of illiteracy is to make all books publicly available. What do you make of this?

Vladimir Grigoriev is deputy head of the Federal Agency  for Press and Mass Communications and a leading expert in the Russian book market. Born in 1958, he worked as an editor for the Novosti news agency,  after which he founded and  directed the publishing house Vagrius, one of the trendsetters i n Russia’s ever-changing  literature scene.

This is a total distortion. First of all, there is public domain. All the classics are there. Second, there are many authors who are prepared to make their texts publicly available on the internet. As part of the policy of modernisation that our leaders have announced, different types of libraries, media libraries and electronic information centres that are accessible  electronically are popping up across the country. You go to the library and if you want to read a book online, it is accessible free of charge. If you want to print a copy, then you have to pay for it. I think legislation can be built around this framework. The digitalisation of the book market could eventually become a lifesaver for all the readers around Russia.

How do you regard the recent boom in the numbers of small  publishers in recent years?

Small publishers now have a strong sense of injustice: big publishers own bookstore chains and are trying to build virtual monopolies. Seeing no other way out, the small publishers knock on their doors and are offered the most unfavourable terms, after which they begin searching for alternative ways to distribute their books. For example, they look for allies among their own ranks. One day we will come to realise that book sales and publishing need  to be separated. Otherwise, we are going to run into a dead end.

It appears you are convinced that the market will regulate  itself without the government’s intervention.

Our book-publishing industry is almost 95pc private and market-oriented. If we dig, we find something similar in the history of the British, American and German book publishing industries. They had the same problems with growth in the market and growth in business.

What do you think the Russian book market will look like in 2030?

There will be a print-on-demand or similar digital equipment in every regional library, every post office branch around the country . Anywhere in Russia, people will be able to access books electronically or print them, and there will be no need for trucks to carry books from Moscow to Vladivostok. At the same time, traditional books will have been preserved, but mainly those with elements of high literary art and design.