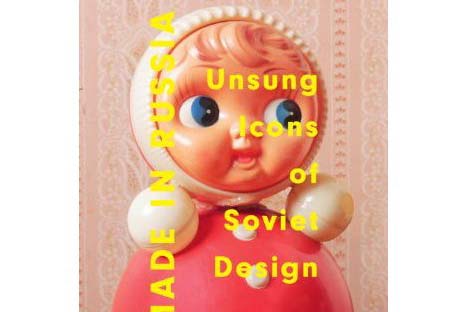 In his irreverent, quirky and loving book, “Made in Russia: Unsung Icons of Soviet Design,” (Rizzoli), editor Michael Idov brings in a team of heavyweight writers and artists to explore Soviet life, art and kitsch. Together, they reminisce and rediscover the hardscrabble, ineffable designs that helped to shape Soviet life. They chose 50 of the most evocative icons to riff on.

Recalling one of the Soviet Union’s brightest moments, when Sputnik-1 orbited the earth in 1957, Idov quotes Claire Booth Luce, who called the spider-like orb “an inter-continental outer-space raspberry to a decade of American pretensions that the American way of life was a gilt-edged guarantee of our national superiority.”

Inevitably, Idov writes, Sputnik “jump-started a number of design trends.” He also readily acknowledges that many Soviet designs were clumsy rip-offs of Western inventions. Made in Russia manages to focus on the most inspirational emblems, the best of a “crazed, Modernist pastiche,” Idov writes. “It jumbled together wartime know-how, space-age aesthetics, accidental shabby chic, Slavic motif and warped dreams of the West.”

Most of the items then, chosen by Idov and described by Bela Shayevich, are not feats of Soviet engineering. More intriguingly, they are the flotsam and jetsam of a dead society, from the ubiquitous 12-sided drinking glass to the loot-revealing fishnet shopping bag.

“Unsung Icons” offers dueling memories. One of the most powerful images is that of street soda dispensers with a single communal glass. Pathetic, intimate and warm-hearted, the image does evoke some eerily simple life.

“The book started out as an antidote to nostalgia,” Idov said in a phone interview. He found a recent tome by acclaimed Russian journalist Leonid Parfyonov, called “Our Era,” “omnivorous in its nostalgia.”

Idov said he worried he had gone too far in the other direction. He decided to balance the hipper, ironic tone with personal essays.

The essays are written by the likes of artist Vitaly Komar and Russian Jewish émigré writer Gary Shteyngart. The result is a bit chaotic — the book is at times a raw mix of essays, text, description and images — but packed with emotional power.

Lara Vapnyar’s recollection of her school uniform — which awkwardly resembled a blocky version of a French maid costume — conjures an archetypal scene of an adolescent whose stirrings are stanched by a Soviet mother. The epic question: At what point does a school uniform fit? For a daughter, when it fits her form. For a mother, when it hides her growing daughter.

But the most visionary essay is written by Vitaly Komar, the pre-eminent founder of the Sots Art movement. Not only does he deconstruct the hammer and sickle, he recalls a limerick, what he calls an “infamous folk ditty of the 1960s.”

Here’s the hammer,
here’s the sickle
Our nation’s proud symbol
Forge your steel,
cut your hay
You’ll be buggered
either way.