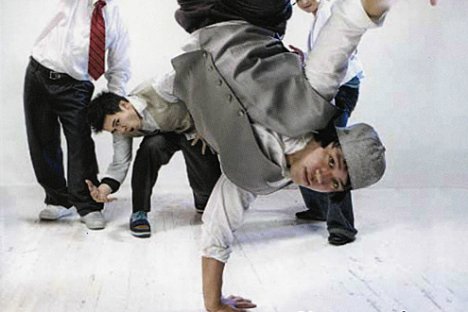 Part of the book cover for "Rooftop Anesthesia".

Young Russian novelists are redefining the world around them. Their fresh perspective gives a modern dimension to the country’s celebrated literary tradition. Unburdened by the Soviet baggage of their forbears, but uncertain about Russia’s future, younger writers are forced to look honestly at their surroundings.

Immediacy and a characteristic focus on the loneliness of young adulthood are keynotes of Pavel Kostin’s short novel, “Rooftop Anesthesia.” Set in a decaying urban landscape of skyscrapers and streetlamps, it follows the introspective Peter in his attempts to escape the pressures of modern life by scaling the tallest buildings in his hometown by night. Peter advertises online for assistants. He quickly finds that his hobby, which he has nicknamed “urban extreme,” is turning into a cult and a commercial enterprise.

This trajectory forms a powerful exploration of the corporate branding of the modern world. In a key passage, the narrator expounds on—via e-mail—an intensely personal concept he calls “blithe fury.” He describes battling through rainy streets to “tear the dense wet day apart”; he defines blithe fury as overcoming resistance, “pushing back the wind.” By the time the Internet-savvy Nemo and the business-minded Sergei have finished with his hobby, there is no longer space for the individualism that urges Peter out into the stormy nights. In order to produce a marketable video, they must wait for a sunny day.

From the opening line, the narrator uses the summer heat of a provincial Russian city as a metaphor for the conformism of the “urbanites” around him; the ability to be “normal” is “to smile in the orange air of July.” This rejection of social conventions appeals particularly to the booming young adult market. For older readers, there is an intriguing freshness in the raw innocence of a writer still finding his voice.

There is something of the farce of Bulgakov in the novel’s surreal midnight episodes, an ironic echo of the rooftop perspective that the devil achieves above Moscow. It’s playful, postmodern stylistic montage is also vaguely reminiscent of Venedict Eforeev’s iconic prose poem, “Moscow Petushki,” the rambling 1969 monologue of an alcoholic intellectual on a train. Both novels share the savage underlying message that ultimately the only sane reaction to life in an insane world is to attempt escape by any means.

The English translation of “Rooftop Anethesia” is published in one volume, together with Andrei Kuzechkin’s “Mendeleev Rock,” another serving of youthful alienation and group dynamics in the city, with side orders of violence, incest and rock ’n’ roll. Andrew Bromfield, famous as the translator of Boris Akunin’s historical whodunnits, has provided serviceable renditions of both authors’ use of street slang and streams of consciousness.