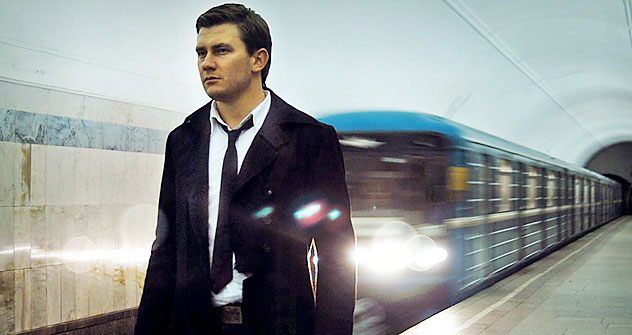 The ‘Universe of Metro 2033’ project has become a global phenomenon, and new writers are now jumping at the chance to get on board.

In a secluded two-storey house on the edge of a Moscow park, a young man with penetrating eyes, dressed in a leather coat, is addressing an audience of about 100 people, setting out a plan to take over the world. Outside, masked people in camouflage uniforms guard the entrance of the house.

No, this is not a secret meeting of some clandestine organization seeking to rule the planet. It is a meeting of fans of the post-apocalyptic saga Metro 2033 with it's creator Dmitry Glukhovsky and British writer Grant McMaster who has recently teamed up with him.

Nearly 10 years ago, the then 22-year-old Glukhovsky wrote a story about the survivors of a nuclear disaster, set 20 years after the event. He sent the manuscript to a publishing house, which responded in a rather unenthusiastic manner, particularly disliking the fact that the main character dies at the end, leaving no hope for a sequel.

Despite the rejection, Glukhovsky posted all 13 chapters of his novel online and got on with his career as a journalist. And, little by little, the Metro 2033 website gained popularity. Encouraged by this positive response, Glukhovsky returned to the script and considerably reworked it. When complete, he offered it to the publisher again – this time backed by thousands of potential readers. The result exceeded all expectations: Metro 2033 has been reprinted several times in runs exceeding 100,000.

The readers asked for more Metro 2033 adventures, and they soon got them. “I made my name thanks to the internet,” says Glukhovsky. “All my novels are available online, on their own websites, accompanied by soundtracks and pictures.”

The first book by British writer Grant McMaster, who joined the Universe of Metro 2033 project last year, begins in the underground of Glasgow, where Euan lives with his family after the old world has been destroyed by nuclear warfare. When ‘slavers’ capture Euan’s wife and children, he sets off on a dangerous mission south to save them. Britannia 2033 is published in Russian, and is due to come out in English soon. Also look out for The Roots of Heaven by Italian Tullio Avoledo, which is set in Rome and Venice

But the appetite for post-apocalyptic adventures seemed insatiable. So Glukhovsky – who by this time was a popular radio presenter and journalist as well as an author – launched “Universe of Metro 2033”, a project to encourage other young writers to come on board.

The idea is that the authors write their own novels – all with the post-apocalyptic theme and the action set underground – and Glukhovsky chooses the best to be published by one of the leading Russian publishing houses. “All the novels complement one another”, explains. “There are no tough restrictions for the authors; everyone contributes something new.”

This is where British writer Grant McMaster came in. “Last year McMaster got in touch with me on Facebook, and now our project has   Britannia 2033, its first book [published last month] written by a foreign author”,  says Glukhovsky.

“I read Metro 2033 and thought that a book set in  the London Underground would definitely work,” McMaster says. “Now I have  stories for another two books set in Britain.”

Glukhovsky’s novels have been translated into 35 languages. Now the books of some of the project’s other authors have also been published abroad. It’s an endeavor that attracts attention from all over the world, and now features novels by contributors from the US, India, Cuba, Italy, and Japan. “It is our ambition to conquer the entire world,” Glukhovsky says with a smile.

Although he claims not to want his project to become “purely commercial”, with such an international audience it seems odd not to capitalise on it – a lready there are Universe of Metro 2033 computer and board games, and more might follow.

Such a huge interest in the post-apocalyptic world could be worrying on one level,  inspiring fears about the future. But Glukhovsky has no such concerns. He is now working on a new book, which he describes as “a  large, futuristic science fiction novel describing mankind in some 100-150 years’ time – without any apocalyptic or other disasters”.