The Future and the past as a reflection of the present 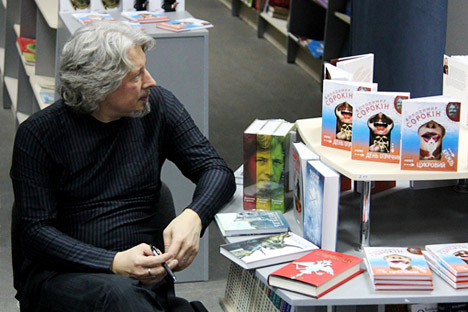 It is never clear exactly what the nobleman in question did to offend “his majesty” (in this future, Russia’s monarchy has been reinstated), but the oprichniki understand without question that he deserves his fate at their hands.

The oprichniki were originally Ivan the Terrible’s army of bodyguards, a feared and violent group. Sorokin simultaneously returns to medieval tyranny and, like so many contemporary Russian novelists, sets his story a few years in the future to comment the more ferociously on the trends he observes in the present day. A recent production of Rimsky-Korsakov’s “The Tsar’s Bride” at London’s Royal Opera used a similar comparison to great effect, seamlessly transposing 16th-century criminality and politics into modern Moscow.

Sorokin uses a spicy mixture of archaic Russian terms and futuristic slang. His characters measure distances in versts and arshins, drink kvass and eat kasha, while driving high-end cars (mercedovs) decorated with the traditional oprichink symbols — a severed dog’s head (to bite the tsar’s enemies) and a broom (to sweep them away). They communicate on mobilovs, receive holographic news bubbles and glass spheres of hallucinogenic fish. This linguistic diversity has challenged, but not defeated, translator Jamey Gambrell, who has spent a long time translating Sorokin’s “Ice Trilogy,” also published in English this year. She compares his unorthodox use of language to modernist techniques in art.

“Day of the Oprichnik” has been compared repeatedly to Ray Bradbury’s classic “Fahrenheit 451.” For Komiaga, unlike Bradbury’s Guy Montag, there is no redemptive conversion. Yet Sorokin’s startling novel also serves as a harsh mirror for mankind to look at itself.