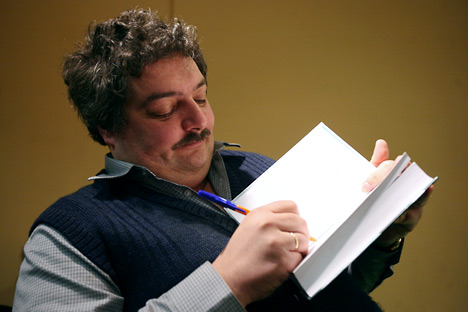 Imagine the chaos ensuing from the discovery of a new fuel — one that renders Russian oil irrelevant. That is what happens in Dmitry Bykov’s brutally ironic novel “Living Souls.” In the much-anticipated novel, newly translated into English, Russia has descended into civil war. Fictional ethnic groups, the northern “Varangians” and southern “Khazars” battle endlessly for dominance and for their own version of history; meanwhile, the true natives, the gentle “Joes” and “Wolves,” are caught in the crossfire. In the Varangians, Bykov satirizes mindless belligerence and nationalism, but the opposing Khazars - liberals, Jews, revolutionaries- are also power-hungry and duplicitous. Bykov, who is himself Jewish, has referred to his own ironic work as “anti-semitic.”

A well-known journalist, Bykov has written several novels and a prize-winning biography of Pasternak, but “Living Souls” is the first to be translated into English. The paperback edition is out this year.

That Bykov has subtitled his novel “A Poem” resonates on several levels. The complex and varied use of language, morphing between folk tale and contemporary political tract, laced with songs and prophecies, occasionally comes closer to surrealist poetry than narrative. The 19th century satirist, Nikolai Gogol also subtitled his novel, “Dead Souls, A Poem”; the English version of the title was clearly chosen to reinforce this allusion.

The four groups of characters, whose destinies form the crux of the story, all become wanderers, travelling across Russia’s vast distances in search of love, freedom, safety or meaning. The fact that their peregrinations are often circular is symbolic.

Circles and rings, wheels and garlands are central to the pagan rituals of the natives. “The year goes round in a circle,” explains Asha to her lover, Borozdin, governor of a Siberian province, before they flee into exile.

Russian history itself is portrayed as an endless cycle of tyranny and terror, followed by thaw, chaos and revolution. Volokhov, a wandering major, is “terribly tired of this sad merry-go-round.”

The literary roots of the tale’s quest for national identity reach back beyond medieval Italy to Greek and Roman poetry. There are references to Homer. Gromov, another itinerant military leader, is described as “Odysseus without his Ithaca.” Bykov’s characters question the ancient epics, as they do all histories. The native peoples have their own secret versions of events, kept alive against the odds.

If this jumble of characters and overlapping journeys sounds confusing, it is. Bykov’s ambitious novel perhaps attempts too much, though there is a comic element that saves the novel from perishing under its own burdens.