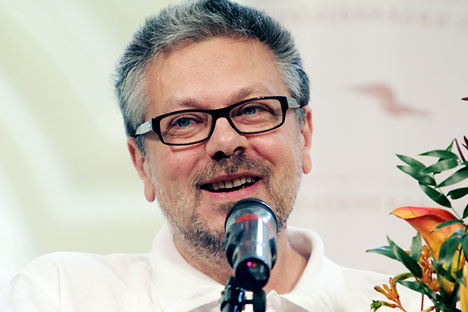 Mikhail Shishkin’s “Letter-book” has been shortlisted for the NOS literary award. Source: PhotoXPress

Mikhail Prokhorov has been in the news a lot recently. The unexpected waves of protest following the Dec. 4 Duma elections encouraged him to re-enter the Russian political fray, stating his intention to run for president. He announced his decision this week, telling the press “society is awakening.”

Whether he’s buying up basketball teams in New Jersey or running for president, the billionaire gold tycoon’s activities are many and diverse. His charitable Prokhorov Foundation has an ambitious brief, from sports’ fields to theater festivals.

One of Prokhorov’s less-publicized interests, in the west at least, is contemporary literature. His foundation has set up a new literary award in Russia, the NOS, or Nose, Prize. The strange-sounding title stands for ‘Novaya Slovesnost’ (new literature); the prize was inaugurated in 2009, the 200th anniversary of the birth of playwright and novelist, Nikolai Gogol. One of Gogol’s satirical short stories describes how a civil servant’s nose goes off on its own adventures.

The NOS prize was organized by the Prokhorov Foundation in 2009 when Russia celebrated the 200th anniversary of the birth of playwright and novelist, Nikolai Gogol. Photo by ITAR-TASS

The prize is part of the foundation’s broader World of Books program, which includes the Krasnoyarsk Book Fair. The ten books selected provide an interesting cross-section of contemporary Russia’s literary output. There is an emphasis on memoirs, like Irina Yasina’s, “History of an Illness,” an account of living with multiple sclerosis, as well as books written by poets and collections of short stories, like Nikolai Baitov’s “Think when you speak.” The bestselling genre fictions that currently dominate world markets are virtually nowhere to be seen. Instead, the prize seeks to promote “modernity and originality…the creation of new meanings.” The organizers say they are seeking no less than a new “mental and metaphorical map of the world.”

Such high-brow aims form a very interesting contrast with the recent debate over the Booker Prize in Britain, where chair Stella Rimington, a former head of M15, insisted on the readability of shortlisted novels. No such scruples trouble the Russian panel. Their debate over the long-list, published in the form of a leaked Wiki-NOS, reads more like an academic symposium than a squabble over “dumbing down.”

The poet, Elena Fanailova, whose own work often deals with a nation grappling with historical self-image, is one of the judges this year. “I am interested in literature which is trying to answer the questions ‘Who am I?’, ‘Where  am I?’ ’’ she said in the discussion.

The chair of the judges, cultural critic Mark Lipovetsky, identified a distinct postmodern sensibility in the works under consideration. Many of them deal with people struggling with “faceless, irrational forces: siege… sickness… destiny.” The first of these refers to Igor Vishnevetsky’s experimental novella, “Leningrad,” set during the blockade and written as a kind of postscript to Andrei Bely’s “Petersburg.” Like Bely, Vishnevetsky is primarily a poet and his foray into fiction is partially in verse.

It takes literary determination to write or to relish a sequel to Bely’s “Petersburg.” Vladimir Nabokov called this symbolist epic, with similarities to Joyce’s “Ulysses,” one of the four greatest novels of the twentieth century.

Another poetic work on the shortlist is Maria Rybakova’s fictionalized verse biography of the poet and translator, Nikolai Gnedich. Gnedich’s translation of Homer’s “Iliad” was the first and still the most-read version in Russian. Rybakova’s work is lyrical with some psychedelic streams of consciousness.

Literary critic Konstantin Milchin singles out Mikhail Shishkin’s shortlisted “Letter-book” for the “beautiful and experimental prose in which he talks about our history, tying together different eras and languages.” Shishkin spoke movingly at the London Book Fair back in April, where extracts from “Letter-book” were read in English. He has already won several literary prizes and would seem to be a strong contender for the Nose.

The other big-name entrant is Viktor Pelevin, whose collection of short stories, “Pineapple Water for a Beautiful Lady” is already a bestseller. His brand of epoch-spanning sci-fi is probably the closest the shortlist comes to genre fiction.

University lecturer, translator and pioneering LiveJournal blogger Alexander Markin has also been multiply shortlisted. His contribution is another five-year instalment of his memoirs, entitled simply “Diary 2006-2011.”

The prize organizers invited members of the public to start their own voting online from Oct. 1 and, currently, the run-away favorite is a work called “Outcome” by D.J. Stalingrad. Since this book didn’t even make it to the shortlist, there will presumably be an alternative readers’ award. With such a diverse selection of writers and such interesting criteria for inclusion, the official choice of winner seems to be wide open; since not one of the works in question has yet been translated, it’s tricky for non-Russians to enter the fray. None of the experts I asked would venture an opinion yet either, but one confident prediction emerged. Prokhorov’s initiatives are generating interest among translators and publishers abroad and more of us can hope to access some of this innovative writing in the future.