From translator to novelist and activist 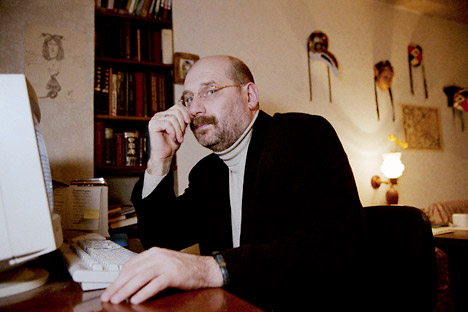 Translator and writer Grigory Chkhartishvili, known in Russia under the penname Boris Akunin, doesn't rule out that he will be engaged in politics in the near future. Source: Corbis

Grigory Chkhartishvili had a successful career as a translator before he became the famous mystery writer Boris Akunin. But now he may be taking on another challenge – opposition politics.

In 1970, a geography teacher in a Moscow school was distributing countries among his students for an assignment. The assignment was quite simple: The students had to collect newspaper clippings about specific countries. One of the students got Tunisia, Ecuador and Japan. Soviet newspapers regularly wrote about the first two, mostly about the heroic struggle of the local working class against capitalist exploitation. But they wrote virtually nothing about Japan, until one day the student came across the news that a Japanese writer had attempted a coup. And that’s how Grigory Chkhartishvili became interested in Japan. Or at least it’s how he explains his fascination with the country.

Since then, Chkhartishvili has undergone several major metamorphoses. At first, his life looked like that of a typical Soviet intellectual in the humanities: he studied languages at Moscow State University in the Institute of Asian and African Countries and later worked as a translator. He translated from Japanese and English, and, ironically, his most famous translations were of the work of Yukio Mishima, the very writer whose failed coup attempt had such an impact on him. In the 1980s and 1990s, Russia saw a boom of Japanomania, largely thanks to the efforts of Chkhartishvili and other Japanese studies experts. And that’s when it happened.

“I wanted to change my life. I suddenly felt that I was tired of everything I had at that time. I had to find an occupation that better corresponded to my inner self. I had reached the ceiling with my translations. I realized that I would never break through it, and to keep working for 50 more years at the same level was clearly not for me,” Chkhartishvili said in an interview with “Russky Reporter” magazine. And the famous translator transformed himself into an astonishingly popular fiction writer.

In 1998, he began writing historical novels under the penname B. Akunin. Readers later dubbed him “Boris.”

Chkhartishvili took a scientific approach to his transformation from translator to writer. He attributes his success to a few elements that appear in all his work: a charismatic protagonist, a serial narrative, and, finally, a kind of literary game with the reader.

Chkhartishvili’s protagonist is Erast Petrovich Fandorin, a Russian Sherlock Holmes with German roots, an intellectual and athlete who is infinitely noble and honest. Chkhartishvili has written 14 books about Fandorin so far, and from novel to novel readers can see evolution. Fandorin is haunted by shadows of the past, and the aftermath of actions from earlier books is always seen in later novels. The Fandorin series is filled with literary games and allusions and the result is a multi-layered book. Readers can follow it as an adventure novel, or you can try to guess the classic Russian novels from which Chkhartishvili borrowed particular episodes. This makes the books both popular fiction and something intellectuals aren’t ashamed to read on their commute.

The Fandorin series was originally the domain of intellectuals. “These detective stories are written by a Japanese-Russian translator. He is one of us; you can read these books. I wouldn’t read a detective story written by just anyone,” said one reader, who preferred to remain anonymous.

Spin-off series then appeared. In addition to the Fandorin books, there is an Extracurricular Reading series about Fandorin’s ancestors and descendants. Then there is the separate Sister Pelagia series, about a nun detective.  Chkhartishvili is also supposed to be the author of two more literary projects, but the writer himself seems to be interested in something completely different. Now he has indicated that he wants to move on from novels, as he moved on from translating.

Since late last year, Chkhartishvili has been writing a LiveJournal blog in which he focuses on historical topics. He cites fun facts that he discovered while working on his books, posts unusual pictures and photos, and quotes stories, diaries and parables. In late 2011, his blog was published as a book, and prior to that, Chkhartishvili released a collection of his readers’ photo-haikus about their families.

On both his blog and in interviews, he has repeatedly criticized Vladimir Putin and the current Russian political system, emphasizing that the trial of Mikhail Khodorkovsky was politically motivated and shameful. However, like most Russians, before December 2011, Chkhartishvili did not see himself in politics. But then came the parliamentary elections, followed by the rally at Chistye Prudy on Dec. 5, and then the dispersal of the Triumfalnaya Square rally on Dec. 6 – and by Dec. 10, Chkhartishvili had turned from a writer and blogger into a public political figure.

The story of Chkhartishvili’s involvement in the movement is the stuff of legend. The writer is in his house in St. Malo, France, writing a new book, and then he jumps up, gets into his car, drives 500 kilometers to Paris, takes a flight to Moscow and finds himself at the Bolotnaya Square rally, where more than 50,000 people enthusiastically listen to him speak. Many thought Chkhartishvili delivered the best speech of the day.

“I never thought I would be speaking at a rally. It is hard to imagine anything more alien to my whole temperament,” he wrote to his blog readers after his Bolotnaya appearance.

In his speech, Chkhartishvili proposed establishing a coordinating council for the opposition. He became a member of the council, first on a temporary basis, and then permanently. Maybe can translate the frustration of the Russian intellectual class into action.