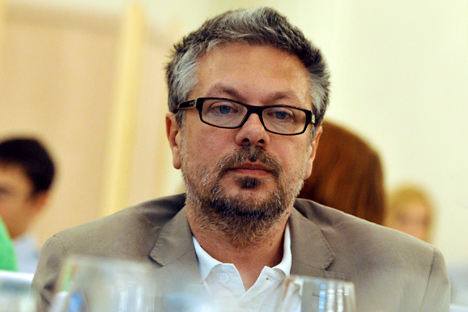 Mikhail Shishkin is one of Russia's novelists whose works attract a lot of attention from abroad. Yet most of his works remain almost unknown in the English-speaking world. Source: ITAR-TASS

Mikhail Shishkin has won all of Russia’s major literary awards, but his work is only just now being translated into English.

Commenting on recent protests in Russia, award-winning novelist Mikhail Shishkin is rather pessimistic. He compares the country to “a metro train that travels from one end of a tunnel to the other – from order-dictatorship to anarchy-democracy, and back again.”

A writer’s sense of his own importance

Read Mikhail Shishkin's interview on the next page

Shishkin’s own novels transcend the narrowly political, exploring instead the underlying human narratives of history. His works are in every sense long overdue for translation, and the time is finally here: Shishkin is the only novelist to have won the Russian Booker, Big Book and National Bestseller awards, as well as a legion of other prestigious prizes, and yet his work remains almost unknown in the English-speaking world.

Shishkin has been compared to numerous great writers, including Anton Chekhov, Vladimir Nabokov and James Joyce. He laughs at critics’ need to find literary similarities, but admits that Chekhov has been influential, along with Leo Tolstoy and Ivan Bunin, from whom Shishkin said he learned not to compromise as an author. “If you say to yourself ‘I will write for such-and-such a readership’ – you immediately stop being a writer and become a servant,” Shishkin said in explanation.

According to Shishkin, the literary accolades that continue to greet his novels confirm “what was important to you is also important to someone else.”

Marian Schwartz has just finished translating the award-winning “Maidenhair,” first published in Russian in 2006. The novel draws on Shishkin’s own experience of working as an interpreter for asylum seekers in the Swiss immigration office.

“Shishkin's is a voice I not only can hear in English but also find very amenable to being transformed into English.  I'm very excited that readers here, too, are going to have the chance to hear it now,” Schwartz said.

Schwartz describes the book as “extremely ambitious and daring, but ultimately tremendously rewarding.” She admits that translating it was a challenge.

“I remember all too well how confusing it was the first time I read it. Shishkin’s array of voices is dizzying in the best kind of way,” she said

Translation of this rich and allusive novel was further complicated by extensive literary references ranging from Xenephon to Agatha Christie, as well as by neologisms and wordplay, including “an entire page that is at least half palindromes.”

Meanwhile, the prolific Andrew Bromfield is producing an English version of Shishkin’s latest novel “Pismovnik” (Letter-Book), which netted the author a second Big Book award in November 2011. Academia Rossica published an extract from it earlier in the year to coincide with the London Book Fair, at which Shishkin was one of the speakers. “Letter Book” is a love story between Vladimir (Vovka) and Alexandra (Sashka), but naturally the plot is not that simple. The reader gradually realizes that the lovers are separated not only geographically (he has gone off to war), but also historically. The resulting disjunction creates a fractured hymn to the immortal power of love. Sashka writes: “All the great books and pictures aren’t about love at all… they’re about death;” Vovka writes back: “Compared to our happiness, death seems like a mere trifle.”

According to Bromfield, Shiskin’s fascination with universal human themes is part of what makes his work accessible to a non-Russian audience, despite the intricacy of his language.

Since 1995, Shishkin has lived mostly in Switzerland; he celebrates the tradition of émigré Russian writers and dismisses the idea that writers should be tied to their native land: “The world is changing; borders disappear. In the world of the Internet, it is already irrelevant in which part of the earth a Russian writer lives and writes.” Nevertheless, he lived for most of last year in Moscow and said that it is important to him to maintain that connection with his native land.

A writer’s sense of his own importance

Novelist Mikhail Shishkin, who has won all of Russia’s major literary awards, is just now being recognized in the west as a worthy successor to Russian literary giants. He spoke to Russia Beyond the Headlines’ Phoebe Taplin about writing, politics and how living abroad affects him as a Russian writer.

Russia Beyond the Headlines: You seem to be a writer for whom linguistic concerns are crucial. Do you think this makes translating your work particularly challenging?

Mikhail Shishkin: If you've read my books, then you know that the problems of love, death, human dignity, brutality, humiliation are all no less important for me than the linguistic aspects of prose. Text is only the means. Simply, it has long been the case that you can’t say anything with the usual words; they lead nowhere. You have to pave your own unique road. Of course, some things vanish in translation – word games, rhymes – but there are things that are translatable and understandable in all languages​​, for example, the need for love. Words are glass. You need to look not at the glass, but through it to God's world. Words, like glass, exist so that light can pass through them.

M.S.: Would you be interested in reading a novel constructed wholly according to the textbook of how to speak and write correctly? Imagine a play entirely built of phrases from an Anglo-Russian phrasebook for tourists? It would drive you crazy! The art of prose writing consists of irregularities. There are no rules. No one can explain why one incorrect phrase can be simply wrong, and another – in the work of Brodsky or Alexander Goldstein – becomes a great line.

RBTH: You have been compared to Nabokov, Chekhov and Joyce, among others. Are there any writers you feel have particularly influenced you?

M.S.: It’s funny that critics have to compare an author to someone or other. It’s interesting. Who did Pushkin get compared with? Or Tolstoy? With age the past itself changes, and the literary influences. Previously I would have answered the question about who influenced me, thus: Sasha Sokolov, Max Frisch, Nabokov. But now it seems to me that Tolstoy, Chekhov, [Ivan] Bunin exerted the most important influences on me. Bunin taught me not to compromise, and to go on believing in myself. Chekhov passed on his sense of humanity – that there can’t be any wholly negative characters in your text. And from Tolstoy I learned not to be afraid of being naïve.

RBTH: Which contemporary writers do you find interesting?

RBTH: What are your views on the recent protests in Russia? Do you have forecasts, fears, hopes for your homeland?

M.S.: My country’s problem, unfortunately, is not that the last elections were irregular, but that even if they had held without any kind of violations, United Russia would still have won anyway. The chief value in Russia, as always, is stability. And I fear we may yet look back on this period with a touch of nostalgia – “those were the days, but we didn’t appreciate them.” Gogol compared Russia with a troika, and so it seemed to generations of Russian readers, that we rush off somewhere or other in this troika. And now, Gogol would compare Russia with a metro train, which travels from one end of a tunnel to the other - from order-dictatorship to anarchy-democracy, and back again. This is its route. And you don’t go anywhere else on this train. But human happiness and unhappiness does not depend on geography and the degree of development of democratic institutions.

To call people to the barricades in Russia is beautiful, but senseless. We lived through all this already in the early '90s. All revolutions take place in the same way - the best people rise up to fight for honor and dignity, and they die. On their corpses, thieves and bandits come to power, and everything comes full circle. The same thing happened during the Orange Revolution in Kiev. The same thing is happening right before our eyes in the Arab world.

Apparently, in Russia a new generation has grown up who want to experience the barricades. Alright. They will experience them. And they will be disappointed.

RBTH: YouhavementionedbeforethatlivingabroadhashelpedyouunderstandRussiamoreclearly. Youhavepointed out that Gogol wrote the quintessentially Russian “Dead Souls” partly in Switzerland. Can you say more about this process? Do you miss Russia? How did you feel returning to collect your prize last month?

M.S.: Leaving Russia, where the language is alive and changing all the time, was very important for me. Language there is changing so fast that it can be compared to a speeding train. What today seems fresh and fashionable will already be rotten by tomorrow. A writer can ride this train, as fare-dodger or as driver, but if you live in another country, the train leaves you behind. And there’s no point running along the rails – you’ll never catch up anyway. Leaving Russia helped me understand that I did not need to run after the departing train, but to create my own language, which will be fresh and alive forever, even after I am gone.

The world is changing; borders disappear. In the world of the Internet, it is already irrelevant in which part of the earth a Russian writer lives and writes. I live in Switzerland and wrote all my major books there. The stereotypical idea of a Russian writer who is dying of homesickness and cannot write poetry outside his native tongue, was invented, of course, not by writers, but by rulers. Gogol, Turgenev, Tolstoy, Dostoevsky, Bunin, Nabokov wrote their best works about Russia, while they were abroad. And if the image of the writer-emigrant, fortunately, is history, the tradition of writing in Russian in any part of the globe will nonetheless continue to grow. After all, your native land is the place where you were born, but you can and should live and write everywhere.

I am often in Russia; all last year I lived in Moscow. It’s important for me to keep that connection – to travel to meetings with my readers in provincial towns. And of course, it’s important for me that I am the only author whose books have won all the most prestigious Russian literary prizes. The prize is important because it is a sign of confirmation that you did the right thing when you wrote, by refusing to compromise with the reader. If you say to yourself: “I will write for such-and-such a readership,” you immediately stop being a writer and become a servant. This lack of compromise is vital to work. When you put that last full stop, you are in danger of being left alone with just your uncompromising ideal reader, but winning a prize means that what was important to you is also important to someone else.