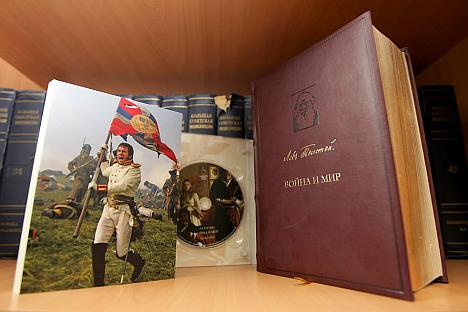 Thirty-two percent of voters consider "War and Peace" a must for any student. Source: Sergey Savostianov / RG

In response to Prime Minister Vladimir Putin’s suggestion that a list should be made of the best books in the Russian language, Superjob.ru held an online vote to determine what these are.

Recently, Prime Minister Vladimir Putin proposed making a long list of the best literary works in the Russian language. In response, the Superjob.ru portal decided to find out which books Russians themselves would include on the list.

Respondents placed Leo Tolstoy’s “War and Peace” at the top of the list. Thirty-two percent of voters consider the epic work a must for any student. Why? Some of the responses included “because it’s a great book capable of shaping a worldview that binds the nation,” and “this classic is glorious, and it is eternal!” Mikhail Bulgakov’s novel “The Master and Margarita” came in second with 19 percent of respondents considering it a must-read.

Next on the preferred list is Fyodor Dostoevsky’s “Crime and Punishment” (16 percent), followed by Alexander Pushkin’s novel in verse “Eugene Onegin.” Rounding out the top five is Mikhail Sholokhov’s “And Quiet Flows the Don.” Five percent of respondents called this tragic saga about the fate of the Don Cossacks mandatory reading.

Visitors to the website also believed that the list should include 19th century classics like “Woe from Wit” by Alexander Griboyedov, all of Pushkin’s works, “Dead Souls” by Nikolai Gogol, “Fathers and Sons” by Ivan Turgenev,” and “The Idiot” by Fyodor Dostoevsky. “All these works are still relevant today,” read one comment. Another 4 percent of respondents believe that modern students must read the Bible. One voter called it “the wisest book that, unfortunately, is not taught in schools.”

Classic Soviet works and works by foreigners garnered the fewest votes from Russians Neither Remarque nor Gabriel Garcia Marquez was able to increase the standing of foreign authors; even the Criminal Code of Russia won more votes than Remarque’s “Three Comrades” and Marquez’s “One Hundred Years of Solitude.” A few respondents also named the Russian legal code, a reference book on Russian grammar, a guide to the basics of commerce, and a textbook on the history of the Soviet Union – this choice explained with the comment: “Otherwise soon Lenin will be a supervisor at the Coca-Cola company and the Great Patriotic War will be a computer game.” Others selected books on ethics and aesthetics and still others. a manual on “obtaining basic skills and knowledge in the field of modern commerce (buying and selling). That’s the industry that most young people are trying to get into.”