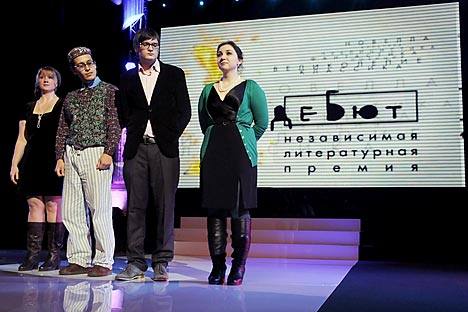 Young writers abound in the country of Dostoyevsky, and the Debut Prize catapults some of them into the ranks of most esteemed Russian authors.

Despite the popular perception that people have been reading less and less, Russians’ interest in literature is still strong, and publishing houses are deluged with manuscripts from novice writers every day.

For those struggling writers under thirty-five, the Debut Prize, an independent literary prize for young authors established in 2000, is a chance to muscle in to the rarefied turf of acclaimed writers. Last year, more than 40,000 Russian-language writers competed for the prize, with works sent in from all over the world.

At stake is one million rubles (more than $34,000) in prize money in one of six categories, publication in Russia and abroad, mentoring from prominent writers and a reserved seat in the literary scene.

Sergey Shargunov, the 2001 Debut laureate, last year made the short list of the prestigious National Bestseller prize with his autobiographic novel, “The Book without Photos.”

Playwright Vasily Sigarev, who won in 2000, has since then harvested a crop of Russian and international prizes, including a British Evening Standard Theater Award in 2002.

One of the most outstanding Debut discoveries is Alisa Ganieva, who won the prize in 2009. She had been known to the literary world as a critic, but after she won the Debut it was revealed that it was Ganieva who wrote the short novel “Salam, Dalgat!” under a male pen-name. The book recounts one day in the life of a young man from Makhachkala (Republic of Dagestan, North Caucasus). The novel was hailed by critics: “There is no other work in modern Russian literature that gives such an honest and definitive picture of the contemporary Caucasus,” literary magazine Oktyabr wrote.

Ganieva wrote about the criminal underworld of Dagestan’s Wahhabis, a very sensitive subject for the region. The book garnered terrific response and plenty of controversy. In Dagestan, Ganieva’s homeland, it is considered disgraceful for a woman to write such things. Yet, it was the absence of fear that made the Debut prize winner a writer with a capital W.

Ganieva told Openspace.ru: “The sharp, often negative response to my debut text, from Dagestanis and not only Dagestanis, written and oral critical reviews of various natures and levels – these have taught me a lot. Outside of the Debut, I would not have dared to discover myself as a prose writer.”

Changing the Rules for Debut

For a decade, only writers under 25 were invited to compete. However the panel of judges recently announced an increase in the age limit to 35. “When I started writing, I was already 25, and could not compete for the prize, but when I learned that the age limit had been raised, I immediately sent in my text,” said Debut-2011 Science Fiction prize winner Anna Leonidova, 33, of the Moscow Region.

The Debut prize is considered generous, and is equal to some Russian literary prizes for more accomplished writers. The organizers said they believe such a significant prize for young writers is a good investment. “A writer needs a place where he can write. A million rubles can help the winner deal with everyday issues and focus on writing,” said Debut coordinator and writer Olga Slavnikova.

For playwrights, the prize means more than just money and publication – it means a play has a better chance of being staged. “Plays are like Russian girls: the most important thing for them is to find a husband, i.e. a director. I put some makeup on mine and made a presentation – why should it stay an old maid?” said playwright Nina Belenitskaya. Already one of the most successful young Russian playwrights and a nominee for the prestigious Russian Golden Mask theater prize, she made the Debut-2011 long-list.

Debut-2011 Small Prose winner Eduard Lukoyanov had sent his manuscripts to Debut three times, and his final attempt earned him the coveted prize. “Literature has always been important to me. I got addicted to reading and writing at an early age, but then I was faced with a problem – it is not profitable to work with young authors in our country, and it’s not very interesting, to tell the truth,” Lukoyanov told RBTH. The Debut prize is a pleasant exception that has proven him wrong.

The winners keep writing, inspired by their success and the vote of confidence. “My main objective – to write a truly great work – has become even more complicated. They expect more from me, and the requirements are tougher. A Debut prize is not a reason for us to rest on our laurels, but an incentive to continue our diligent and elaborate work,” said Vladislav Pasechnik, the Prose winner in 2011 for his novel “Mode.”

It is noteworthy that the Debut organizers promote their alumni not only in Russia. The works are translated into many languages, such as English, Chinese, German, French, and Spanish, and are included in so-called “tasting” collections. “Debut attracts an astonishing amount of young talent. I remember my generation at the same age – there were fewer of us, we were weaker and indistinct, but these guys are much brighter,» Olga Slavnikova said «There is a belief that more boys are born before wars. Now we see many writers being born – and they will conquer this world again».