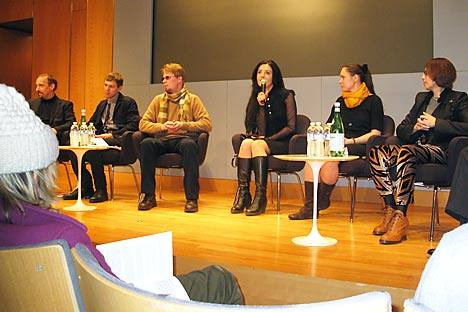 The young winners of the prestigious Debut prize were in the United States last week, on a hectic tour of New York, Boston, and Washington, D.C. RBTH caught up with Russia’s youngest published authors at the New York Public Library.

Olga Slavnikova, a highly acclaimed writer in Russia, has become the country’s most visible and devoted mentor of young writers, primarily through the prestigious Debut prize she helped to establish. Slavnikova recently introduced four of her prodigies – Alisa Ganieva (2009), Irina Bogatyreva (2006), Igor Savelyev (2004) and Dmitry Biryukov (2005) to readers in the United States.

The New Russian Literature program, the work of New York-based non-profit Causa Artium in partnership with The Debut Prize Foundation,commenced with a swank reception in a private home in the heart of Washington, D.C.’s trendy Adams Morgan district. Before heading to Boston, the quartet stopped in New York to read at the New York Public Library, known for its long tradition of support for Russian literature and writers.

Every year, according to Slavnikova, the Debut contest receives from 40,000 to 70,000 manuscripts. The four winners selected for the U.S. tour represent the diversity of Russia’s writers in terms of themes, interests and background.

“Taking a man’s name was a trick, a literary device, because in today’s Dagestan girls are not allowed to move so freely around the city as men and boys, so written from a female perspective it would be strange,” she added. She also was seeking some disguise, and liberation, from her background as a critic. Her debut novel “Salam, Dalgat” about a young boy’s stream of consciousness while walking on the streets of Dagestan’s capital Makhachkala, caused a stir.

Writer Irina Bogatyreva has been influenced and inspired by the works of Gayto Gazdanov and Jack Kerouac. She writes about Russian hitch-hikers, basing her stories on her own experience. Bogatyreva grew up in the city of Ulyanovsk on the Volga River, where Vladimir Lenin was born and raised, then studied in Gorky’s Literature Institute.  The Debut award, which she received in 2006, changed her life, she said.

“After I received the Debut I felt like I had to write better,” she said. “And my first book got published only when it was short-listed for Debut. I’m not sure if it’s just a coincidence, but to me it certainly seemed connected,” she recalled. Like Kerouac’s characters, young Russians in Bogatyreva’s novels are existentialists who travel not just to see the country, but also to find themselves and their destiny.

The author said she receives a lot of feedback from older Americans, Baby Boomers who hitchhiked extensively in the 1970s. “I think, it’s very exciting for them to see how, decades later, something that was conceived in United States has its own life somewhere in the heart of Siberia,” Bogatyreva  said.

Dmitry Biryukov is a writer from Novosibirsk, a city with a strong tradition of science-fiction literature. “Just look closer at Siberia, at it’s endless snow-covered forests, and it will inevitably inspire you to write something colossal,” he said. Yet his story “Uritsky Street” could have taken place anywhere in the former Soviet Union. Biryukov’s writes a Kafkaesque novel about a pharmacist just before the Socialist Revolution of 1917.

Debut writer Igor Savelyev also explores the epic and reflective experience of traveling. He writes about his hometown of Ufa, a city between the Volga River and the Ural Mountains. His favorite book while growing was Harper Lee’s “To Kill a Mockingbird.”

In Savelyev’s semi-fantastic novel, people are allowed to travel on the train’s luggage rack, which is very cheap and a great way for Russia’s youth to see the country. His attention to detail and satiric style is reminiscent of Gogol himself.

The audience at the New York Public Library laughed heartily as Savelyev read his piece, but he never aimed to be funny, he said. “I write about very serious things and don’t try to make them look funny,” he insisted. “I guess I was just born acid-tongued.”