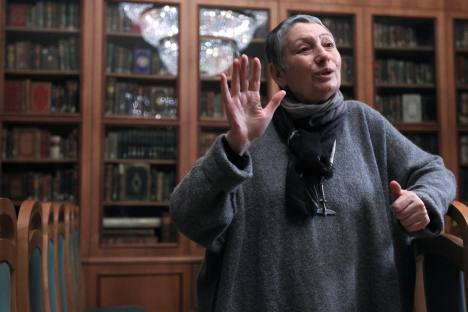 Ludmila Ulitskaya, Russia's well-known writer, came up with a novel which champions “a personal religion of the mercy and love of God and one’s neighbor, and not the religion of dogmas and authority, power and totalitarianism.” Source: RIA Novosti

Ludmila Ulitskaya is used to crowds.  One of Russia’s bestselling authors, she is also internationally known as a dramatist and opposition figure. Her staged readings of the letters she exchanged with her imprisoned muse, Mikhail Khodorkovsky, also created a sensation – at least among a certain Russia-watching elite.

Read more about the Russian literature:

The Future and the past as a reflection of the present

But in London’s stylish King’s Palace, she is a bit outside her element. Her talk during Jewish Book Week was sold out, but the tickets went to an audience who, for the most part, had never heard of her before. Many readers walked away still full of questions, which is how Ulitskaya likes it. She discussed her prize-winning, acclaimed novel, “Daniel Stein, Interpreter,” which was translated into English last year.

“Daniel Stein” is based on the story of Oswald Rufeisen, a Polish Jew who was an interpreter who helped Jews escape from the Mir ghetto, escaped himself, and hid in a monastery for a year before converting to Christianity.  Ulitskaya based her novel loosely on his incredible life. “I have always been curious about people on the margins,” agreed Ulitskaya. “Daniel Stein and his followers have blurred boundaries.”

The work also touches on several theological debates. In Ulitskaya’s words, the work champions “a personal religion of the mercy and love of God and one’s neighbor, and not the religion of dogmas and authority, power and totalitarianism.”

Ulitskaya’s novel may be postmodern in its style; its pages are a collage of letters and diary entries, reports and transcripts, but its themes are the timeless riddles of life and death: how to be true to ourselves, how to survive brutality, challenge hypocrisy and have compassion.

Exploring faith, identity, sexuality and power, Ulitskaya’s “novel in documents” is nothing if not ambitious. It has drawn criticism from several religious groups; as Ulitskaya said “theologians have been explaining why I am wrong, but I am not interested in theology; I am interested in a person having to survive in a world in which they feel uncomfortable. Daniel knew how to do it.”

Ulitskaya herself previously worked as a geneticist and as artistic director of Moscow’s Hebrew Theatre. She met the real Daniel at a time of personal crisis. She was impressed by his ability to say “I don’t know; I don’t understand” and by his emphasis on orthopraxy (doing the right thing) rather than orthodoxy (believing the right thing). She recalled his passionate interest in the early Christian church, a topic she herself researched extensively for the novel, and his role as a “living bridge between Judaism and Christianity.” “I think he was a saint,” she said simply. In the novel she calls him “a man who lived in the presence of God.”

Whether Ulitskaya succeeds is debatable. By inserting some of her own letters to her agent, full of self-doubt and discomfort, into the patchwork fabric of the novel, she seems to suggest that her goal is ultimately unreachable; some questions are too big to be answered, but the attempt to answer them is a crucial and ongoing part of our common humanity. “While I was writing it,” she said, “I was convinced that I was going to fail.” But she decided to persevere and found – to her surprise – that “the book appeared at a moment when it was needed; it may not have given an answer, but it outlined an issue.” It also won several prizes, including the 2007 ‘Big Book’ award and a place on the shortlist for “booker of the decade.”

Ulitskaya feels the novel, with its ideas of multiple perspectives and crossing borders, is as relevant as ever in the fractured modern world. The fight against hypocrisy and corruption is still urgent. Asked about her reaction to the recent protests in Moscow, Ulitskaya said: “I was present at the last one and there was an incredible atmosphere. I was pleased because … that protest was the first time I had seen people mocking power in Russia.”