The language of silence finds a voice 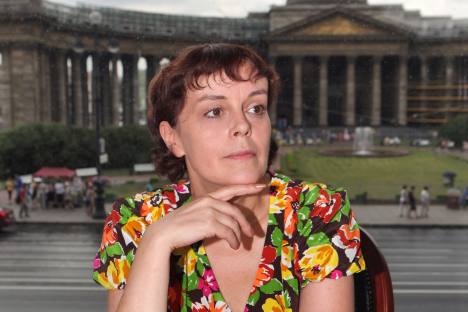 Elena Chizhova's "The Time of Women" captivated RBTH literary critic Phoebe Taplin with its story of life in Soviet Leningrad.

Young Sofia can’t speak, but she is one of the most important narrators in Elena Chizhova’s “The Time of Women ,” the sad and beautiful tale of life in Soviet Leningrad. We hear her thoughts (and her adult voice, framing the story) as she tries to make sense of life in a 1960s communal apartment, growing up with a single mother and three surrogate grandmothers. They raise her on a mix of secret religion, parables and French while keeping her out of the orphanage.

Sofia’s silent commentaries are peppered with a child’s fears and fairy tales; in the poignant prologue, she remembers following her mother’s coffin which “should be made of glass. Then everybody would see that Mama is asleep, but will wake up soon.” There is not much mystery as to how the story will end, but the richness of both characters and atmosphere pulls the reader through a plot whose folktale motifs — ghostly brides, sleeping daughters and scheming old women — are part of a very real world of factories and dormitories haunted by war.

One of the delights of “The Time of Women” is the sense of ordinary domesticity that is used as backdrop and foil to some of the 20th century’s horrors. Chopping onions, peeling potatoes and boiling laundry are woven into the narrative streams of consciousness. These minutiae are important on several levels. They parallel the details of the struggle to survive the Leningrad blockade: starving children chewing coal or wallpaper glue, a factory worker saving her family by hiding dough under her breasts. They also link the novel to a tradition of feminist writing that refuses to see domesticity dismissed as traditionally women’s business and champions it instead as a vital and under-represented area of life. This may be partly why some critics felt “The Time of Women” should not have won the Russian Booker Prize. It is a tension Virginia Woolf identified in “A Room of One’s Own:” Is a book important if it deals with war and not if it deals with “the feelings of women?”

Mining for love in a Dystopian Russian future

Chizhova’s fragmented monologues embrace war and women, famine and food preparation. The title and the style both challenge more conventional narratives. The mixture of eavesdropping, whispered dialogue and stories is set against the official versions of reality on the new TV.

Sofia’s muteness becomes a metaphor for the enforced silence of the times. In “The Time of Women,” the difficulty of living with trauma and oppression is represented in broken grammar, shifting narrators, unfinished sentences. It doesn’t always make for easy reading, but it does convey a powerful sense of the almost inexpressible tragedies of life, of poverty and sickness, the legacy of terror and the need to look honestly at the past.