Gary Shteyngart: From dystopia with love 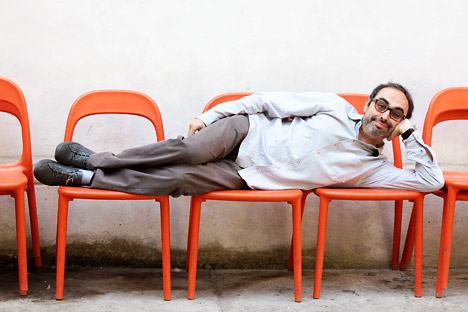 Gary Shteyngart: "Russian men drop dead around 56 on average, so I have 17 years left to get the record straight". Source: Getty Images / Fotobank

Gary Shteyngart, America’s beloved writer from Russia, talks to RBTH (a little) about life as an émigré writer.

In less than a decade, Russian Jewish émigré Gary Shteyngart has become one of America’s best-loved satirists.  Like his peers in his native Russia, he is now exploring foreboding futures in his work. Recently, he has begun skewering the United States, which has become another easy target, he has said, alongside his mother Russia.

His 2010 novel, “Super Sad True Love Story,” focuses on America while his first two novels (“The Russian Debutante’s Handbook,” and “Absurdistan”) satirized Russia and the former Soviet bloc. When Shteyngart turned his bite on the United States in the not too distant future, critics hailed the novel as his best yet.

In “Super Sad True Love Story,” America is dependent on China in new and insidious ways. Our anti-hero, who as always resembles Shteyngart, who is now pushing 40, is a guy named Lenny Abramov. Plagued with self-esteem issues, he works in a vaguely abhorrent field--life extension—that makes him feel even worse. The son of Russian immigrants, he falls in love with the much younger daughter of Korean immigrants. The weight of failed expectations falls like debris around them, and somehow they find each other in the wreckage.

Michiko Kakutani wrote in the New York Times that the book “reflects his dual heritage, combining the dark soulfulness of Russian literature with the antic inventiveness of postmodern American writing; the tenderness of the Chekhovian tradition with the hormonal high jinks of a Judd Apatow movie…and ratified his emergence as one of his generation’s most original and exhilirating writers. “

But in Russia, Shteyngart is an unknown. Russian critics have been merciless, and readers have been slow to discover him. He returns to Russia every year, and in 2010 spoke to university students about his incredible success in the United States, and his extremely mixed reception in Russia.

In his tongue-in-cheek Q&A with RBTH, Shteyngart said he has “five elderly Jewish readers” in Russia, which of course may be at total exaggeration. He also told RBTH that he thanks President George W. Bush for “making America’s standing in the world much closer to Brezhnev’s Soviet Union.”

RBTH: In your twenties, you created the satirical character Vladimir Girshkin and upended the literary community with your talent. Chang-rae Lee said it was as if "Woody Allen had been an immigrant." What do you see now when you look at Girshkin? Was he an alter ego?

GARY SHTEYNGART: When you start writing a book in your early 20s, of course it's going to be autobiographical. What else do you know?

You have written that you were nervous or anxious as a child. Do you still get anxious or nervous? What is your advice to an anxiety-choked nation?

You should see my medicine cabinet. State-of-the-art! I'm the last person to be giving advice to an anxious nation. Just gobble down the Xanax and pray for 6 solid hours of sleep, America.

How does it feel to have been born is country that no longer exists (USSR)? How much does this fuel your work?

You write about the Soviet Union and modern Russia as easily as the United States, how do you manage to stay in touch so closely with such different realities?

I go back to St. Leninsburg [sic], my hometown, almost every year. To quote Yakov Smirnoff, What a country!

Do you have a Russian audience in Russia? Which works are translated into Russian? Does anything get lost in translation about the immigrant experience?

I have an audience of five elderly Jewish people in Moscow and St. Petersburg. They seem to like me OK. The rest of the country, not so much.

Obviously your work is satire, but how close to the future world do you think you get in "Super Sad True Love Story"?

Thank you, George W. Bush, for making America's standing in the world this much closer to Brezhnev's Soviet Union.

What is a "beta immigrant" and when did you realize you are actually an alpha immigrant? How did you celebrate? Or is it important for you to not get too carried away?

What can you tell us about what you are working on now?

A memoir! Russian men drop dead around 56 on average, so I have 17 years left to get the record straight.