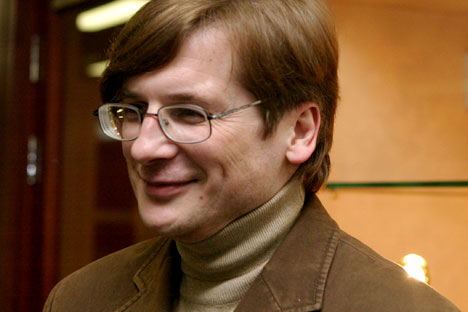 It has become a cliché to describe some city or other as the main character in a novel, but in Oleg Zaionchkovsky’s “Happiness is Possible” Moscow is alive and all-encompassing. The human characters interact with an anthropomorphized city. “Moscow remained indifferent to Marina’s selfless love,” he writes, or “the city … is the arbiter of our destiny and the master of our wills.” In the end, “We are Muscovites, children of the metro; time and again we seek refuge in its maternal womb.”

Zaionchkovsky’s novel, which was shortlisted in 2010 for two major, national prizes, is a series of darkly comic vignettes. The narrator is a struggling novelist, whose ambitious wife has left him for another man. What his story lacks in plot, it amply repays in disheveled charm and style. He shuffles, unshaven, through the dacha village of Vaskovo or fills the abandoned Moscow apartment with dog hair and ashtrays. The smell of the sewage works, the sound of the hammer drill or the pangs of jealousy are the pieces of grit around which Zaionchkovsky makes his pearls of stories.

The author himself was born in the riverside city of Samara and worked until recently as a rocket engineer in a small town, but he recently moved to Moscow. He conveys the city’s gravitational pull; submitting to it is like joining a secret club. The deafening noise provides a “solace and reassurance that only we can understand”, but it also demands sacrifices. If everyone settled down happily, the narrator argues, the metropolis would lose its energy. Instead of starting families, the citizens “are woven, minute by minute, into a web of countless lines of communication”.

A.D Miller was a perfect choice to introduce the English version of this book; it has several elements in common with Miller’s own Booker-shortlisted “Snowdrops”: a fallible narrator, a powerful sense of Moscow as a place and a feel for the absurdity of the things that can happen there. For Miller “Moscow is a monster” and he sympathizes with Zaionchkovsky’s account of the brutal, corrupt and uncompromising nature of urban life. But in “Happiness is Possible”, as the title suggests, there are more moments of affection for an endlessly interesting city and a celebration of its inhabitants’ lives.

This is an unusual novel among the (still relatively small) corpus of contemporary Russian works in translation, dealing, as it does, with neither the triumphs and terrors of history nor the prophetic horror of a dystopian future. Zaionchkovsky’s book is set in contemporary Moscow with its quotidian pressures and pleasures. It combines situational humor and philosophical reflection with a distinctively Russian edge. The discursive, drifting, fatalistic narrator, fond of sleeping in the day, is reminiscent of Goncharnov’s sluggish hero, Oblomov, the epitome in classic Russian literature of the traditional “superfluous man”.

At other times, this literary satire is more like Bulgakov’s “Theatrical Novel”, where a feeble writer is lost in a labyrinth of bureaucratic officials and quixotic directors. Zaionchkovsky’s protagonist is taken to “Gridlevsky’s place”, where the “cultural fraternity” are said to dine, but which the novelist-narrator has never heard of.

There are also shades of Bulgakov’s canine-human from “Heart of a Dog” in the close bond between the narrator and his mongrel companion. In one chapter he and his fellow pet owners become a “dog-man community”. From the details of life around him, the dogs’ areas, dachas, metros, orbital highways, internet dating and literary buffets, Zaionchovsky weaves a fine tapestry, one that you need to stand back to admire.