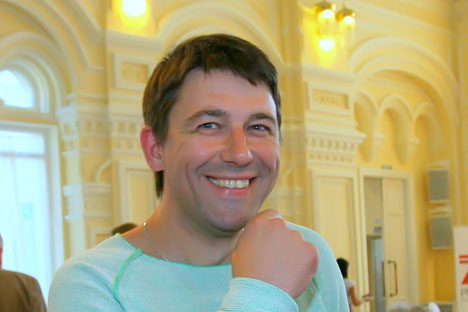 Alexander Terekhov, will be in New York for Read Russia, June 1-8 at the Book Expo in New York. His recently translated satirical fantasy “The Rat Catcher” is not for the squeamish.

Two rat catchers from Moscow are summoned to the town of Svetloyar to exterminate a plague of rats. The town in the text is a reference to the actual Svetloyar Lake in Russia, a place enlivened by its own mythology. According to legend, a Russian Atlantis called Kitezh, visible only to the pure of heart, was submerged and hidden from the invading Mongol hordes there. This myth is a suitably fanciful point of departure for these bizarre adventures.

Terekhov’s version of Svetloyar presented in “The Rat Catcher” fantasy is the antithesis of mythical Kitezh with its sinking golden domes and underwater bell-ringers. Like the author’s hometown, the novel’s setting is an ugly, industrial settlement from the Stalin era, which is desperately bidding for inclusion in the tourist trail of historic Russian cities known as the Golden Ring. The town is described from the outset in terms of sickness; the high-rise blocks swell and the dark elevators move in their shafts “like roving blood clots.”

At times, the novel pays homage to “The Government Inspector,” Nikolai Gogol’s satirical play, set in a small town in the 19th-century Russian provinces. In fact, some similarities are so obvious (a corrupt and divided populace; an anxiously awaited official visit; a duplicitous outsider who wreaks havoc among both men and women) that Terekhov must be pointing out the undying and endemic nature of human weaknesses: greed, bureaucracy, incompetence and infidelity. Even the rats are prefigured by Gogol; the mayor dreams of “two extraordinary rats… black and unnaturally large.”

The narrator of “The Rat Catcher” informs us: “In an ordinary meat plant, there are four rats to every square meter… There are always bits of rat in the sausages.” This is the kind of charming detail that Terekhov’s readers are treated to throughout the book. In the best traditions of rat-infested literature, from Robert Browning’s “Pied Piper,” where the rats “bit the babies,” the tale rests on nauseating imagery.

Terekhov’s rats are metaphorical, yet like all compelling images, they are also painfully real. Ticks, scent trails and droppings create a nest of horrors at every turn. Our sympathies shift between the exterminators and their prey as the narrator lingers over the agonies of ingesting ground-glass concrete mix or anti-coagulant poisons. The major weakness of Terekhov’s atmospheric novel is its confusion and lack of narrative tension. Despite a chapter-by-chapter countdown to a presidential visit, the plot is forever scampering uselessly in new directions.

The novel grew out of the disillusionment Russians felt after the chaos of the 1990s, but its satirical targets could be the leadership of today. The idea of the Svetloyar townsfolk conveniently finding ancient, buried treasures in the woods is as ridiculous as Vladimir Putin’s recent “discovery” of two Greek amphorae while scuba-diving in the Black Sea.