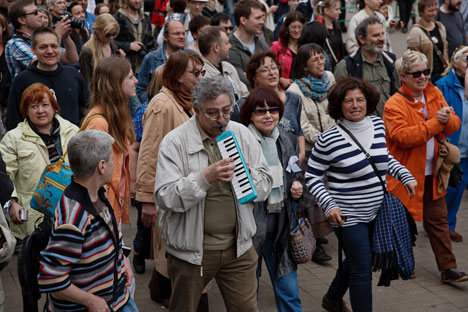 Several acclaimed Russian literary figures, including detective writers, poets and musicians, symbolically gathered on Pushkin Square to lead a “stroll” through Moscow, reciting poetry and reading passages from their works along the way. These talented individuals had the goal of testing the police’s reactions to large groups of people gathering together for peaceful protests as well as the freedom of movement in Moscow as previous marches of this type have led to the arrest of several individuals over the past few days. Starting with some 2,000 supporters, thousands more joined in along the way. The route ended at another park with a peaceful protest that has been ongoing since May 9 coined “Occupy Abai” after the Kazakh poet Abai Qunanbaiuli whose monument stands in the park.