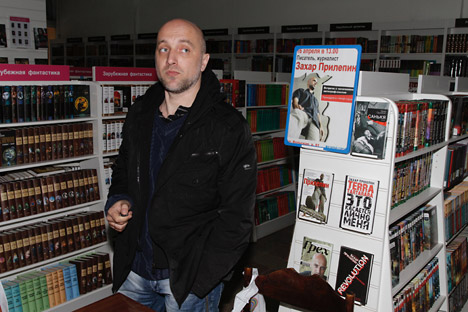 Zakhar Prilepin’s obsession with exploring the nature of Russian identity roots the book in a particular literary tradition. But his dark vision of Russian life in the novel “Sin” reveals that life can, and perhaps will, get better.

Exactly a year ago, Zakhar Prilepin’s emotionally charged novel, “Sin,” won the prestigious “Super Natsbest” prize. The winner was selected from among the first ten years’ worth of Russian National Bestseller Award recipients. “Sin,” now available in English, got the award when it first came out in 2008 and was celebrated last year as the Russian novel of the decade, earning Prilepin $100 000 prize money.

Prilepin, like his namesake Zakharka in the novel, has worked as a security guard, a journalist and a military captain in Chechnya. The writer has recently been involved in opposition to the government; the novel is full of patriotic ambivalence and of fragmented, modern consciousness. There are recurrent references to the “homeland,” seen as pastoral idyll, urban nightmare or suburban wasteland.

“Sin” is not a novel at all in the conventional sense, but a connected series of short stories, mostly, but not always, in the first person. The chronological sequence is confused, skipping from Zakharka’s married happiness back to his teenage encounters with sex and death, and then forward again to adult scenes of vodka-drinking or grave-digging. Like Boris Pasternak at the end of “Doctor Zhivago,” Prilepin includes a sequence of lyrical poems by his narrator.

For readers used to the enforcedly pacey narratives of more commercial, western literature, Prilepin’s atmospheric vignettes might seem strange. They are sometimes reminiscent of Anton Chekhov’s short stories, in which the evocation of place and feeling also often take precedence over plot. As so often in life, there is a sense throughout these picaresque episodes of waiting for the story to begin until, facing death in Chechnya, we realize that it could be almost over.

At this point Prilepin’s subtle strategy finally becomes clear; he shows us patiently that life is what happens in those snatched moments of emotional connection: family love at the dacha, anger outside a nightclub, yearning for home from the front line: “I love my land terribly. I love it horribly and immorally, not regretting anything … Humiliating myself and others … But what is spreading out under my feet – is that my land? My Homeland?” In a prose-poem from the penultimate chapter, the narrator writes “From the fires of the holy Russian camp. – I’ll buy myself a portrait of Stalin … Hello motherland, we are your herd.”

This obsession with exploring the nature of Russian identity is one of the strands that roots the book firmly in a particular literary tradition. Mundane details of Russian life are transformed into icons: “When you come in from the cold, a pot of red borsch quite rightly seems to be an aromatic miracle, or even something divine.” Two characters discuss literature (a popular topic in postmodern fiction); a wannabe-novelist tells the narrator: “many Russian novels are revolting because of the narrator … a person like you.”

This summer’s edition of the journal “New Eastern Europe” contains a bleak, but powerful essay by Prilepin about life in the Russian countryside. It revolves around an anonymous letter, sent to the author before a trip to a provincial city, asking him not to visit them because of the political fall-out, telling him: “This is not literature, not even politics. This is normal life … and it is easily broken.”

Prilepin’s ensuing arguments focus grimly on Russia’s problems with drugs and alcohol, the high suicide rate, depopulation and apathy. “We obviously don’t care much for life,” he writes; and yet Prilepin continues to fight for truth and write such resonant stories because he cares passionately about life and believes it can be better. As the narrator’s beloved tells him at the end of the joyous first chapter of ”Sin”: “there will be more happiness.”