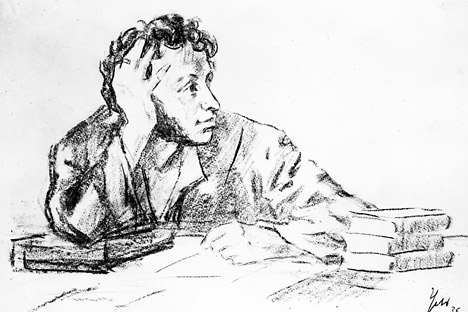 On the eve of Alexander Pushkin's birthday RBTH's Phoebe Taplin conveys four scenes from the life and death of Russia’s greatest poet.

The creator of Russian literature as we know it was born 213 years ago this week. Alexander Pushkin’s verse narrative, Eugene Onegin, effectively started the world famous tradition of Russian novels; his plays and stories inspired operas, songs and ballets and it is rare to meet a Russian who cannot quote his poetry by heart. It is hardly surprising, then, that every town and village wants a piece of him.

Numerous stately homes, churches and cottages claim a connection with the celebrated writer and many places have memorials to him. There is a bronze bust of the poet outside the Moscow school that replaced his probable birthplace. Pushkin was baptized in the glorious, turquoise Epiphany cathedral round the corner.

“The minutes of childhood”

An hour west of Moscow, near the village of Zakharovo, another of Russia’s hundreds of Pushkin monuments stands in a small orchard that once belonged to his maternal grandmother, Maria Hannibal. The young Pushkin spent several summers here, in the birch woods near the lake; he later wrote: “My Zakharovo … reflected in the mirror of waters, with its fences, bridge and shady grove” and recalled “with what quiet beauty, the minutes of childhood flowed.” The statue shows the poet as a boy, leaning on his grandmother’s lap, book in hand, gazing portentously into the distance, as if already conscious that his future greatness is being nurtured by the natural surroundings.

The museum, inside the reconstructed wooden house with a belvedere, continues in the same vein. Miscellaneous nineteenth century objects are used to conjure up a sense of the past, and every view and corner is embellished with quotations. A bust of Peter I on the writing desk reinforces the family’s history; Pushkin’s great grandfather was the captured African prince, Abram Petrovich Hannibal, who became a Russian nobleman and general, and godson of the Tsar. Pushkin later started to write a historical novel about Hannibal, translated as The Negro of Peter the Great.

A marble column outside the lovely sixteenth century Transfiguration Church at nearby Vyazyomy marks the grave of Nikolai Pushkin, the poet’s younger brother, who died when he was six. In one poem, Pushkin describes an autumn visit to the graveyard “where drowse the dead in solemn peace.” This neighboring estate has had many owners, including Boris Godunov, subject of one of Pushkin’s best known plays. The current house, with its park of lime trees, was built by the Golitsyn family in the late eighteenth century. Pushkin often stayed here when it belonged to Natalia Golitsyna who was the model for the ancient countess in his story of madness and gambling, The Queen of Spades.

Pushkin was forced to leave this childhood idyll for his school at Tsarskoe Selo near Saint Petersburg when he was twelve, but he nostalgically revisited the area one last time, just before he got married. Having become a famous poet while still at the Lyceum, Pushkin threw himself into the literary and political life of Saint Petersburg. His involvement in movements for social reform led to censorship and exile. He travelled through the Caucasus and the Crimea and spent two years at his mother’s estate in Mikhailovskoe. He wrote later of his delight there in “country life, Russian baths and strawberries”

In 1831, Pushkin married Natalia Goncharova in the church of the Grand Ascension in central Moscow. Having fallen in love at a ball, the poet finally got permission to marry the beautiful 17-year-old, but the wedding day was beset by “evil omens” (dropped wedding rings and blown-out candles). There is a small, gold statue of the couple under a dome outside the church and another, larger version opposite the flat on Arbat Street where they spent their first months of married life.

Pushkin’s letters of the time suggest another briefly idyllic period: “I am married – and happy,” he wrote; “My only wish is that nothing will change … This condition is so new to me that I feel reborn.” A few months in the same city as his mother-in-law, however, saw him packing to move with his wife back to St Petersburg. “I do not like Moscow life”, he declared; “You live here not as you want to live, but as old women want you to.”

“An icy corpse on the sleigh”

Eugene Onegin prefigures Pushkin’s own death; the hero fights a duel, with pistols in the snow, against his friend, Lensky, a poet (whose frozen corpse is then loaded onto the sleigh they arrived in). This case of life imitating art is particularly curious since a major theme in Onegin is the relationship between literature and real life.

On a winter evening in 1837, Pushkin travelled by sleigh from Nevsky Prospekt to the “Black River” area of Petersburg, then filled with woods and dachas, where George D’Anthes fatally wounded him in the stomach; the poet had become convinced that D’Anthes was flirting (and maybe more) with his wife and challenged the French cavalry officer to a duel.

The drama of the ensuing scene, with Pushkin’s blood on the snow, has inspired hundreds of poems, plays and paintings, one of which can be seen in Moscow’s Pushkin museum on Prechistenka Street. This comprehensive storehouse of Pushkinalia, well worth the modest entrance fee, includes exhibitions on each of Pushkin’s major works, plus much-amended manuscript pages covered in trademark doodles and sketches. The museum also charts the poet’s life through to its untimely end; the picture reconstructs the scene of the duel, with dying bard and fur-lined troika.

Back in Petersburg, the city’s most popular literary museum is Pushkin’s last home in the old Volkonsky House, where he lay dying for two days after the duel. Along with other possessions, the museum displays the poet’s death mask and last waistcoat, complete with fatal bullet hole. There is a granite obelisk at the site of the duel and another statue in the nearest metro station.

“Long will I be honored by the people”

One of the most significant monuments to Pushkin is the high bronze statue at the crossroads of Moscow’s Boulevard Ring and Tverskaya Street. The inscription below it predicts: “Long will I be honored by the people…” It was unveiled in 1880 to the accompaniment of speeches by Fyodor Dostoevsky and Ivan Turgenev.

Later writers were also drawn to the memorial; the poet Marina Tsvetaeva wrote: “I can see those … African shoulders loaded down and overwhelmed with all the Russian snows!” The “metal man on a plinth” also makes a cameo appearance in Bulgakov’s The Master and Margarita and has a crucial symbolic role in Tatyana Tolstaya’s dystopian novel, Slynx. In this and many other works, Pushkin has become a metaphor for quintessential Russianness. Turgenev declared at its unveiling that the statue would “announce to future generations our right to call ourselves a great nation, because this nation has given birth to such a man.”