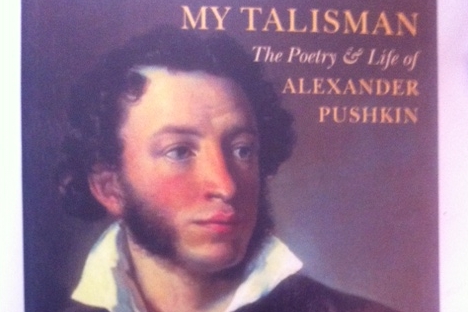 The photo of the book by Julian Henry Lowenfeld. Source: Press Photo

On Pushkin's birthday, RBTH celebrates the poet and offers poetic guidance for Americans from an author and translator of his poetry.

Alexander Sergeyevich Pushkin (1799-1837) is revered by Russians as their national bard and greatest literary genius.  In critic Apollon Grigoriev’s famous phrase, “Pushkin is our all.” To Gogol, “Pushkin is an extraordinary phenomenon, perhaps the only true expression of the essential Russian spirit”; to Dostoyevsky, Pushkin was “the height of artistic perfection.”   Pushkin is the “Prophet” of Russian literature; his phrases permeate the Russian language as Shakespeare’s do English. Yet,  even though Pushkin’s works “represent the absolute pinnacle of brilliance in all Russian literary art” and though Russians revere Pushkin much as English-speakers do Shakespeare or German-speakers Goethe, Pushkin remains relatively unappreciated in the West, at least in comparison with his literary heirs.

The primary barrier to enjoyment of Pushkin in the West has been the absence of proper verse translations.  Pushkin’s majestic lightness is not easily conveyed. Too often Pushkin’s poems, so easy and magnificent in the original, come out even in good English translations with an incongruously comic effect derived from their being forced into verse by translators who are scholars first and foremost, and poets—if at all— a long way second.  Even the most felicitous results can sound at best like Cole Porter or W.S. Gilbert — but nothing remotely like Pushkin in Russia.  Many scholars, intimidated above all by Nabokov, have given up, and chosen to translate Pushkin with bald, prosaic literality.

Nabokov introduced his rendering of Pushkin’s Eugene Onegin by saying: “to my ideal of literalism I sacrificed everything (elegance, euphony, clarity, good taste, modern usage, and even grammar)…” Alas, an entirely literal approach to translating Pushkin yields a lifeless specimen—neatly pinned, perhaps, to a label in a glass case by the master lepidopterist— but with none of the ineffable grace and beauty of a butterfly in flight.

To grasp Pushkin one must hear his musicality.  His genius in its sublimity is properly compared to Mozart’s: miraculous, prodigious feats of creativity, wrought with seemingly effortless grace, evocative power, warmth, wit, passion, sheer musicality, inventive rhythmic swing, and playfulness — and all imbued with a certain divine purity, a wisdom born of innocence, a childlike, direct, sweet, natural, vigorous, limpid clarity — often, alas, all the more mysteriously difficult to translate for its seeming simplicity.  Can you imagine trying to describe Mozart only in words?

If only everyone so felt the power
Of harmony! But no! For then indeed
The world could not exist. No one would think
To bother for the lowly needs of living;
We’d all just lose ourselves in free creation.
So we’re but few, we chosen happy idlers,
Who, of mere use neglectful and disdainful,
Are high priests of the One, the Beautiful.

These words, from Mozart’s last speech in Pushkin’s Mozart and Salieri, the forerunner to Shaffer’s Amadeus, speak of the lonely relationship between a creative genius and the world around him. Pushkin insisted on the sacred independence of the artist: “art’s purpose is not to produce profit, but to create beauty.”  Yet beauty is truly useful, for it is truly healing.  The Pythagoreans, it is said, used to cure the sick with poetry, believing in the unique healing virtues of certain verses of the Odyssey and Iliad when read aloud in the proper way. Pushkin was the Russian language’s high priest of the Pythagorean doctrine of the One, the Beautiful. Like Homer, Pushkin derived indescribable power and dramatic effect as much from the sound—as from the sense—of his words, from their lilt, their swing, their magical incantation: their spell.

Fountain of love, Fountain alive!
As gift to you I’ve brought two roses.

Here is all of Pushkin summed up in just 8 lines:

Of heaven’s realm on Earth a witness
With all within my soul on fire
I sang before the throne of goodness
That warmth and beauty did inspire.

And love and secret inner freedom
Taught my heart hymns and honest tales.
My voice, which never was for sale,
Expressed the Russian people’s yearning.

Pushkin is in many ways atypical, because he exuded such sheer sunlit joy in ways unequalled by any other Russians either before or after.  He wrote “They say that unhappiness is a good school.  Maybe so, but happiness is a better university.”  There is no pinning Pushkin down, no classifying his genius: he had a fearless contempt for shibboleths and slogans:

As this little lamp pales and flickers
Before the clear rising of Dawn
So every false wisdom but glances and withers
Before the Immortal Mind’s spark
And long live its sunshine that vanquishes dark!

Pushkin was the sunshine of Russian poetry, and the enduring poet of the Russian soul, precisely because he was such an incomparable vessel of love:

My melancholy’s light;
My melancholy’s full entirely
Of you and just of you... This gloominess of mine
Nothing’s tormenting, nothing’s moving.
My heart again burns up with loving, because - why?
It simply cannot not be loving.

We wait each minute, longing, longing,
For Freedom's sacred fleeting bliss
The way young lovers fret while counting
The minutes to a secret tryst.

These lines sound as though they were written yesterday.  But today on Pushkin’s birthday, Russians will recite his verse and place fresh flowers the famous monument on Tverskaya Street on Pushkin Square in Moscow, where Dostoyevsky made his famous speech declaring Pushkin “the height of artistic perfection in expressing the universal sympathy of the Russian soul.” That monument symbolizes the unbreakable dedication of the Russian people to their great national bard.   Yet the main monument to the poet is not in bronze, but in the hearts of Russian-speakers who love him.

Pushkin’s famous poem “The Monument” is actually his improvisation on a theme by Horace in his great XXXth ode, “Exegi Monumentum.” Horace wrote:

Not all of me will die; much of me shall
Escape the Temple of the Dead, through and through
Growing in fresh praise, as long as the Pontiff shall
Ascend the Capitol with silent Vestal in tow.

No, I won’t fully die. My soul in sacred lyre
Will yet survive my dust, and, despite with’ring, thrive.
I’ll glorious be, as long’s in moonlit world entire,
One single poet’s still alive.

Pushkin’s glory is not conditional on the tinsel of temporal political power. It needs no sanction from on high, no proclamations, no medals, and no help from either the government or the opposition. Instead Poetry itself, like a consoling angel, guards it safe in Russian hearts “while in our hearts there still lives honor”.  And so, as we celebrate Pushkin today, we can be thankful for two roses the poet enduringly left to his people: Love, and secret inner Freedom.  Long may they bloom, and Happy Birthday, Alexander Sergeyevich Pushkin!

Julian Henry Lowenfeld is a poet and the translator of Russia's literature.

Julian Henry Lowenfeld is the great-grandson of Raphael Löwenfeld, the first translator of Leo Tolstoy’s works into German. (Vladimir Nabokov first began writing poems and short stories under the pseudonym V. Sirin during the year he lived in Löwenfeld’s home in Berlin). Julian majored in Russian literature at Harvard University and continued his studies first as an exchange student in Leningrad State University, and later independently with the renowned Pushkin scholar Nadyezhda Braginskaya. He has lectured to popular acclaim at the famous Pushkinsky Dom (Institute of Russian Literature),and the Museum of Pushkin’s Last Residence on Moika 12, in St. Petersburg, at Pushkin State Museum in Moscow, at the United Nations, The Folger Shakespeare Library, Pushkin House in London, England, Columbia University, Lehigh University, various branches of the New York Public Library and Boston Public Library, Radio Rossiya, Radio Pozitiv, the Voice of America, BBC Russian World Service, Kanal Kultura, NTV, Channel One and other major Russian television channels, and numerous other venues.His book My Talisman, The Poetry and Life of Alexander Pushkin is the only bilingual edition of Pushkin’s poetry extant. In 2010 it received Russia's prestigious Petropol Prize for literary excellence (it was the first time a foreigner had ever received the award). Lowenfeld’s verse translation/adaptation of Pushkin’s Little Tragedies was showcased in November 2009 at the Baryshnikov Arts Theatre. He is currently seeking backing to stage it off-Broadway.