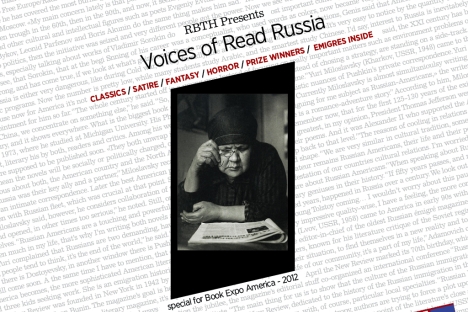 Russia Beyond the Headlines has launched a free digital magazine about trends in contemporary Russian literature.

Russia Beyond the Headlines has launched “Voices of Read Russia,” a free digital magazine about trends in contemporary Russian literature as presented at the Read Russia festival, which took place in New York City from June 2-7.

The country that produced “War and Peace” by Leo Tolstoy and “Crime and Punishment” by Fyodor Dostoevsky continues to give the world many talented writers. Despite their popularity in Russia, however, the books of contemporary Russian authors are rarely seen in bookstores around the world. Thanks to Russia Beyond the Headlines, it is now possible to take a glimpse into the world of modern Russian literature through the app stores of Apple and Google.

A range of dystopian futures describing post-apocalyptic life can be found in many contemporary Russian literary works. The popularity of dystopia among Russian writers is just one of the topics featured in the “Voices of Read Russia” magazine. The magazine also features an interview with famous Russian-American writer Gary Shteyngart, who spoke with RBTH about his life as an émigré writer and his latest bestseller, “Super Sad True Love Story.”  In addition, “Voice of Read Russia” brings together stories on Dmitry Bykov, a humor columnist for many Russian magazines who is also the author behind "Citizen Poet," a year-long project of political satire. The magazine introduces “Queen of Horror” Anna Starobinets, who is well known in Russia as an acclaimed author of frightening short stories and apocalyptic novels.

The “Voice of Read Russia” magazine comes with a sample table of contents as well as an interactive bookmark, which allows readers to mark a page and return to it later.  The app is available in both vertical and horizontal formats. The app has received many positive reviews and a five-star rating from users on the App Store. One user described the magazine as “a must for all bookworms.” “Voices of Read Russia” is available for download at the App Store and Google Play.