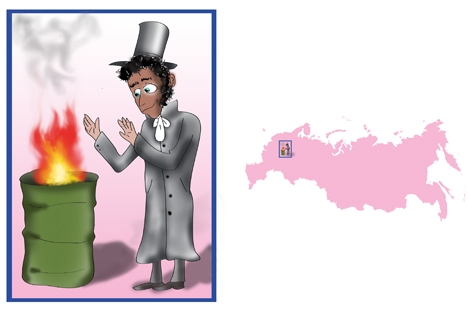 "The only way to reach the American reader is to have the books translated so well they read like they were written in English," said Olga Slavnikova during a panel discussion called "Contemporary Writers on the Russian Classics," which was held at the New York Public Library June 5, as part of the Read Russia 2012 initiative. Also on the panel were Maya Kucherskaya, Dimitry Bykov and German Sadulaev.

Opinion: A Russian export “better than sex” and more valuable than oil

Some of the news during Read Russia 2012 was headline worthy, like Overlook Press's announcement of an ambitious Russian Library project and Natalia Solzhenitsyn's presentation on the vast Solzhenitsyn Archive. They were big stories, but the stated goal of Read Russia was to attract more American readers for the country's contemporary authors. As one of those potential readers, I had my own expectations regarding the mission and documented them before the show. What did I want from Read Russia? "The answer is deceptively simple: to discover..."

Then it was on to Bykov. During the NYPL event, he was discussing the work of Maxim Gorky when he suggested--with tongue planted firmly in cheek--that there were three ways to attract the world's attention to contemporary Russian literature, and Gorky had tried to take advantage of them all a century ago. The first strategy was active government propaganda, the second was to start a revolution and the third was to "write very well, and that's the one we're aiming for right now."

I read Bykov's bone-chilling story "Mozharovo" in the anthology and was immediately primed for more of his narrative voice: "So here they are, the sirens of Mozharovo. These are the people we can't go out and see. We've fenced ourselves off from our own people with steel bars, and we sit here scoffing Strasbourg pâté."

During BEA, the Read Russia booth lured me back again and again with its own siren song (a good one). Often the events were quiet and intimate moments of grace in the midst of the general cacophony that is the Javits Center.

I celebrated Pushkin's birthday there while listening to a pair of young Russian writers read his poems in their native language, followed by Julian Henry Lowenfeld (My Talisman: The Poetry & Life of Alexander Pushkin) reading the translations.

"For several generations Pushkin was a secret code, the key to the preservation of the human in this bedeviled country," wrote Mikhail Shishkin in his Read Russia anthology contribution, "The Half-Belt Overcoat." At a discussion about the Big Book Prize--which he won last year--someone asked if he communicates with many American authors. "My conversation with an American writer takes place in his book," he said. I like that.

I'm currently reading Shishkin's extraordinary novel Maidenhair (Open Letter). From his anthology essay, I learned the book was inspired by his mother's diary as well as the life of singer Izabella Yurieva: "I wanted to write about what I had felt and understood thanks to Mum's diary. I started writing about Bella.... Little of the singer's life remains--there are no diaries no memoirs, leaving us with no more than a spare outline of her life story. In those years people were afraid of their own past--it was impossible to tell what might later put you in mortal danger."

Thus the critical importance of the Solzhenitsyn Archive. A compelling image I retain in memory--as well as photographic form--is of Natalia Solzhenitsyn being interviewed near a Read Russia display focusing upon her late husband.

"What is surprising is how much of the archive is still intact," she had said at one point during her presentation. Reflecting upon the dangerous vagaries of his life, she also noted that he never sought to build a personal library and "loved short pencils," which were easier to hide.

We must treasure what we still have. My quest to "Read Russia" is underway and I can tell already it's going to be one hell of a ride.

Robert Gray is a contributing editor for Shelf Awareness.