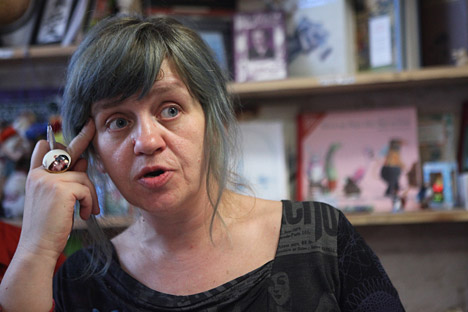 “The Stranger’s Magic,” third volume in a series of ten fantasy novels called the “Labyrinths of Echo,” is published by Overlook Press this month. The author, Max Frei, appears to have the same name as the hero and narrator, an overweight joker, who suddenly finds himself in a through-the-looking-glass parallel world. As author, Max Frei is in fact a pseudonym for Svetlana Martynchik, a Russian artist from Odessa, who spent ten years in Moscow and now lives in Vilnius, Lithuania.

Read more about the Russian literature

Martynchik’s books have been a huge success in Russia and have reached fantasy-fans around the world. Her world-within-a-world has its own illogical rules and customs of the kind that can either win cult followers, or baffle and alienate. Sentences like “he was wearing a lettuce-green skaba and red and blue checked looxi” (from the first book, “The Stranger”) mean that those who were paying attention, and remember that a skaba is a tunic and a looxi is a poncho, can feel the smug reward of the initiate, while anyone else will be lost.

Max makes the transition from earth to Echo with barely a backward glance, apart from a great sequence towards the end of the second book, “The Stranger’s Woes,” where he travels around earth via ethnic cafes (“From New York … I could go anywhere.”) Otherwise, references to the drab, old life serve simply to accentuate the fun of the new.

Most of his missions as “the unequaled Sir Max,” an inexplicably successful member of the nocturnal secret police, have a casual, erratic quality about them, like a meandering dream. Humor and wordplay are crucial; characters frequently, and sometimes bafflingly, compliment each other on particular turns of phrase, leading to nagging worries about the quality of the translation.

The comedy is often subtly satirical. Max’s “work” takes place in a mostly male world, replete with Rabelaisian feasts, but he is sometimes reminded by his companions that in this world women have power, although they can’t bear “being in the public eye and a great deal of fuss and bother.” In this third installment of his adventures, Max battles a dark magician on a desolate beach and becomes king of barbarian Fanghaxra. As monarch, he acquires a harem of beautiful sisters and an oversized dog called Droopy.

This arrangement is not anathema to Echo’s hidden matriarchy. Max’s new wives are daughters of 3000-year old Isnouri, who “rides the steppes alone, without friends or retinue” and sends her children, conceived without men, to marry the kings. His courtiers explain patiently: “the man never decides anything” although “many men have learned to convince themselves that they make the decisions.”

Max Frei has been compared to almost every writer of fantasy going, from Jonathan Swift to J.K. Rowling. There is possibly something Swiftian in the parodies of bureaucracy and petty political divisions, but generally Lewis Caroll seems a better analogy. There are similarities in the psychedelic, episodic qualities of the narrative. Max even comments on his wonderland-style experiences with quotations from Caroll. He finds out, randomly at the end of a chapter, that he can drive an “amobiler” with his eyes closed: “Curiouser and curiouser, Alice’s voice echoed in my head.”

But rating Max Frei’s adventures alongside Alice’s, raises literary expectations too high. Terry Pratchett’s discworld or the meta-fictional pseudo-thrillers of Jasper Fforde might be nearer the mark. These light-hearted adventures have a distinctive flavor of their own, drawing on Russian traditions of dark comedy and newer undercurrents of urban sci-fi. Readers can be drawn into this other world, if they have the time and inclination, but may not be missing too much if they don’t.