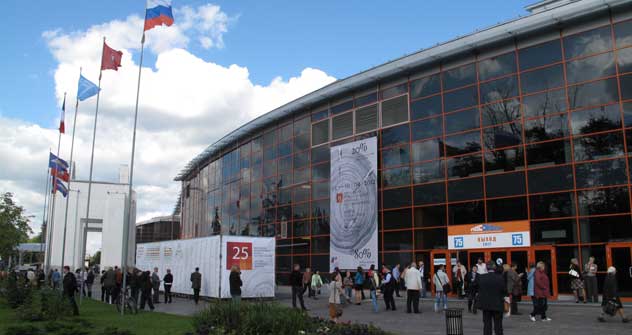 The start of the school year in early autumn has become synonymous with the Moscow International Book Fair. This year, the fair featured 200,000 books from 45 countries.

People were lining up outside of Pavilion 75 of the All-Russian Exhibition Center from early morning, waiting to get into the Moscow International Book Fair – the most anticipated event on the Moscow literary calendar.

There was a definite atmosphere of learning at the fair. The venue itself was reminiscent of Soviet fairs, when an event such as this was called the Exhibition of Achievements of the National Economy – you could still shop for fur coats and honey alongside the books on display. Although, in a way, Pavilion 75 also looked a little like the Gare d’Orsay railway station in Paris. More than 150 publishing houses gathered here to display their bestsellers and latest arrivals.

The highlight of the fair turned out to be the daily meet-and-greets with famous writers; Lyudmila Petrushevskaya, Tatiana Ustinova, Dmitry Bykov, Andrei Bitov, philosopher Mikhail Veller and children’s writer and humanitarian Dina Sabitova all came out to spend time with their fans. Speaking to his readers, Zakhar Prilepin, the multi-award-winning author of the novels Sin and Sanka, touched on the subject of children’s literature, which took up an entire day of the fair.

“Language is the most honest of tools. I cannot imagine contemporary children’s books being what they used to be in Soviet times – like [the heroic adventure stories] Timur and His Squad, for example – because we are living in different times. But I wouldn’t blow today’s terror out of proportion or be overly nostalgic about what we had in the Soviet era …” He also talked about his active participation in the political life of the country. “It came to me very naturally. We are often accused of pulling publicity stunts. I have spent a lot of time with Eduard Limonov [writer and founder of the National Bolshevik party], and I can assure you that this is no PR stunt. Just try living for a while with your phones tapped and people following you around. You will very soon give up on such publicity,” said Prilepin. 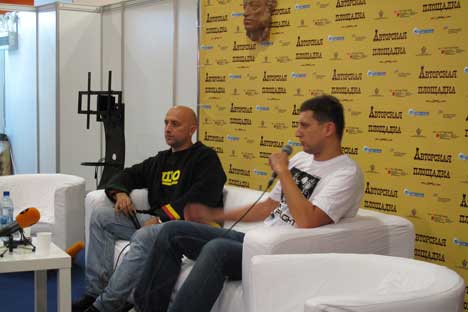 With France invited to the fair as an honorary guest, Moscow readers had the chance to meet famous foreign writers as well. Marie Darrieussecq, Guillaume Musso, Charles Dantzig, Bernard Werber and Frederic Beigbeder (who visits Moscow quite regularly) were all in attendance. Beigbeder, who is incredibly popular with young Russian readers, was a big hit, and his autograph session was drawn out a great deal. At one point, Beigbeder said: “Just look around you! Russian girls are the most beautiful in the world.” Later, he went on to deny rumors that he was planning to co-author a book with his friend Sergei Minayev.

Those who did not get to meet the eccentric French author had the chance to listen to a performance from the oddball Russian poet Nikita Dzhigurda, which was held nearby Beigbeder’s autograph session. Like the Frenchman, Dzhigurda sported long hair and a bear, but as part of an exaggerated image of a Russian bogatyr. His low, hoarse voice has already become iconic; although, no one dares compare it to the legendary voice of Vladimir Vysotsky.

Zakhar Prilepin: A Chronicler of the brutal and the everyday

The central stand at the exhibition was dedicated to Armenia. Armenia’s capital of Yerevan was the first city in the former Soviet space to be bestowed the title of World Book Capital by UNESCO. “The total number of books published in many CIS countries this year topped Soviet figures, which are usually used as a reference point,” Yury Pulya, head of periodicals and book publishing at Rospechat, told RBTH. The main achievements, however, are not the numbers, but the higher publishing standards: typography, graphic design, layout, and new original forms and features.

The diversity of the fair offered something for every taste: from meeting with Dzhigurda to discussions of religious literature and psychological prose. Naturally, the organizers could not let the anniversary of the Patriotic War of 1812 go unnoticed; this was one of the main motives for inviting France to the event as an honored guest. A large stand at the entrance to the pavilion featured literature on the War of 1812 for readers of all ages, including younger children.

Non-fiction literature is becoming more popular among Russian readers. Journalist Maria Gorodova presented one such work with her new book Tenderness Wind, which deals with themes relatable the difficult lives of her readers. This popular genre will be widely represented at the 14th Non-Fiction Fair in November, which has become the customary extension of fall literary gatherings in Moscow.