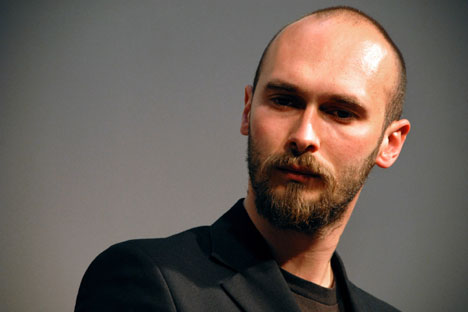 Lilin is a bestselling author in Italy, where he now lives, but is not well known otherwise and remains unpublished in his native Russia, where his work has been met with some skepticism. Source: AFP / East News.

Next month, the American actor John Malkovich will star in a new film based on the memoirs of gangster-turned-gallery-owner, Nicolai Lilin.

Siberian Education is due to premiere at this year’s Berlinale film festival in mid-February and be on general release by early March.

Malkovich, who plays an elderly criminal called Grandfather Kuzya, is widely quoted calling it: “an interesting story about a way of life that most of the audience would not know about,” and told Associated Press: “Things are so global and Americanized. It's interesting to think that kind of (underworld) culture that the film addresses is kind of becoming extinct...”

Nicolai Lilin’s account of his childhood in a criminal community has been controversial.

Lilin is a bestselling author in Italy, where he now lives, but is not well known otherwise and remains unpublished in his native Russia, where his work has been met with some skepticism.

He was born in 1980 in the Soviet Union and grew up in Transnistria, a disputed area on the Moldovan border with Ukraine. “Siberian Education” is loosely based on his early experiences.

The English version of the book describes itself as a “memoir,” but adds an “author’s note” to clarify: “Certain episodes are imaginative recreation, and those episodes are not intended to portray actual events.”

There is a rich literary tradition of fictionalized autobiographies, what J.M Coetzee calls “autrebiography,” encompassing works like Siegfried Sassoon’s “Memoirs of a Fox-Hunting Man” or Salman Rushdie’s recent multi-layered and novelistic account of his fatwa years, “Joseph Anton,” written in the third person.

If the reader accepts this premise, the question becomes simply “is it any good?” Comparisons with Rushdie definitely set the bar far too high in stylistic and intellectual terms, but Lilin’s story is not without interest.

The opening chapters mix the casual brutality of the criminal underworld with childhood adventures, like a cross between Just William and the ultra-violent Alex from “A Clockwork Orange.”

The most engaging sections include scenes in “Aunt Katya’s restaurant,” where ex-convicts share cigarettes and play with hand-painted cards as they did in prison. Katya serves up homemade soup with sour cream and black bread among steaming saucepans and bottles of preserved cranberries. The boys knock back vodka with their kompot and talk about local fights.

German Sadulaev: A visceral voice, writing for those who can’t

Zakhar Prilepin: A Chronicler of the brutal and the everyday

The chapter “When the Skin Speaks” lovingly outlines the secret, coded languages of criminal tattoos, galaxies of violent and religious images intertwined across the whole body, and describes how the narrator became a tattoo artist.

These scenes make a nice contrast with the narrator’s obsessive descriptions of weapons or the horrors of juvenile prison.

When Nicolai is six, he recites Pushkin’s poetry and is given his own flick-knife; the volume ends with military conscription at eighteen, an experience Lilin borrows from another young soldier and expands on from his own experience in the sequel, a relentlessly violent war-diary.

Irvine Welsh, author of “Trainspotting” and himself unafraid of provoking disagreement, reviewed “Siberian Education” for the Guardian when it was first published in English in 2010.

Welsh’s tribute sees the teenage Lilin as an embattled hero, growing up in a society where “the designation ‘criminal’ means someone who adheres to a strict moral code and accepts only the authority of their own community, rather than that of the state.”

This “amazing culture” operates “on higher principles than the mainstream ones pursued in the west,” rejecting materialism in favor of a “form of libertarian socialism, based on the belief … that those who seek power and material gain are inherently weak and evil.”

This idealistic endorsement of an “adolescent killer” raised a few eyebrows among the newspaper’s hyperactive comment-writers.

Most readers however, objected to Lilin’s book on grounds of accuracy rather than its championing of a culture of lawless violence, misogyny and extreme homophobia. “Pure fantasy” says one comment and another: “not just improbable, but impossible” while a third sums up the prevailing trend with “Lilin is a fraud.”

A lonely fan disagrees and, clearly, many members of the Italian reading public are happy with Lilin’s potent fusion of truth and invention. Richard Poplak, reviewing for the Canadian National Post, wrote: “Siberian Education exists in the no man’s land between memoir and roman à clef, a region more memoirists should own up to inhabiting.”

In a measured review of Lilin’s second instalment “Free Fall” (a soldier’s tale from Chechnya), Oliver Bullough, himself the author of a well-received book about the Caucasus, investigated these conflicting claims.

Bullough wrote, in the Independent in 2011, that Lilin had openly admitted his book was not a memoir, but “a novel based on real events” or - as the author’s note puts it - “a story constructed with true details.”

Again, Lilin’s disclaimer is carefully worded: “I created a composite narrator whose experiences combine those of many of my friends…” But this sequel, an aimless collection of horrific scenes, lacks the charm and humanity of “Siberian Education.”

It is less authoritative than Arkady Babchenko's “One Soldier's War” in Chechnya, less compelling than German Sadulaev’s flawed, but lyrical “I Am a Chechen” and far less well-written than Andrei Gelasimov’s subtle novella, “Thirst.”

The truth about war?

Sadulaev’s composite narrative, also part-autobiography and part-fiction, is distinguished by its Chechen viewpoint while Babchenko’s memoir is celebrated for its unswerving honesty, but Lilin knows his market well.

Babchenko’s book was too large, he told Bullough, and “people who only read romances or detective novels, they will not read it so they will not know the truth about the war.”

Lilin’s aim, then, in “Free Fall: A Sniper’s Story,” is to bring the horrors of a brutal conflict to an indifferent audience.

There is certainly a strong sense of the traumatic, repetitive, dehumanizing aspects of war. “All our enemies were called ‘Arabs,’ whether they were Chechens, Muslims, Afghans, Talibans, terrorists, or fighters who had sided with any political creed,” the narrator confesses near the start. Toward the end, they gun down an old man with “a row of medals from the Second World War.”

“Here’s how the Nation repaid him for his sacrifices,” muses Lilin. Whether such philosophical moments justify the chaotic assault of the preceding 350 pages is still open to debate, as is the vexed question of whether Lilin’s books should be treated as fact, fantasy or mutant hybrid.

Ultimately, as Bullough points out, the U.K. publishers, Canongate, are partly responsible for the genre confusion. In the U.S., W. W. Norton & Company published the same translation of “Free Fall” last year as “Sniper: A Novel.”

Lilin’s Italian publishers, Einaudi, also clearly call the books “romanzi” (novels), but the Canongate labels it “memoir” and the blurb reads: “he was conscripted to the Russian military,” something the author has never claimed (he told Bullough he volunteered for the army).

Sales of both books will probably increase when the film is released, but they should be accurately marketed. Creative fusions are fine, but not deliberate misrepresentations.