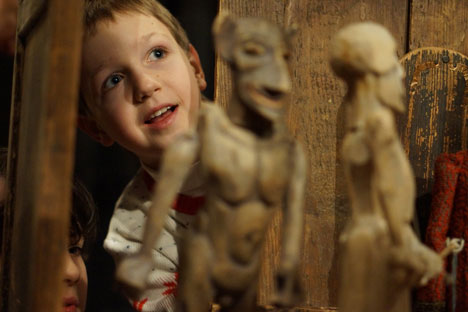 Actors from Teatr.Doc, Moscow Theatre of Documentary Plays, are going to instill schoolchildren with a love of books. Source: PhotoXPress

Actors from Teatr.Doc, a collective, political project, which produces topical documentary theatre, go to school to instill schoolchildren with a love of books.

Teatr.Doc, a collective, political project in Moscow, which produces topical documentary theatre, travels from school to school, getting students actively involved in literature through story-telling. Actors re-tell the stories, which range from Soviet children’s books to 19th-century Russian plays, and students are drawn into performances in the classroom. The troupe has toured various kinds of schools, even working with migrant children and children with learning difficulties.

Teatr.Doc at school and at home

This Moscow Theater of Documentary Plays was founded in 2002. Being an independent team-based project, the theatre mainly works with original texts, interviews and memoirs. The theatre does not have a stage as such; instead, the audience itself is drawn into the performance and becomes as important as the main characters. This is improvisation theatre in every sense of the word. One of the theatre’s main projects was the Emergency Theatre and ‘I’ training, which was geared toward integrating a person into current issues.

School No. 957 in Moscow’s Yuzhnoe Medvedkovo district caters to children with learning difficulties. Today, their literature lesson will be one to remember — it will be taught by actors of the documentary theatre Teatr.Doc. There will be nothing prim, proper, strict or formal about this lesson: the children are encouraged to talk, shout in excitement, interrupt each other and go up to the blackboard without asking the teacher.

During the lecture, Aleksei Bogachuk-Petukhov and Konstantin Kozhevnikov will tell (or, more accurately, show) the children a story from a novella by Soviet children’s literature writer, Nikolai Nosov. The novella is entitled “Vitya Maleev at School and at Home.”

What is a novella, how is it different from a novel, and why does the main character decide to do this or that? The children answer all these questions as the chapter is being played out. Aleksei and Konstantin not only retell the story, but they throw light on its most important aspects. The duo explains the meaning of unfamiliar words and plays the role of teacher, making sure the kids at the back of the class are paying attention.

Near the board, where the teacher normally stands, is a makeshift bed made out of chairs. An “actor” is chosen to play the main part. He is given a blanket and lies peacefully on the chair-bed. All the kids have a chance to stand up in front of the class. Some are embarrassed and awkward, and others are impassive — and the one who plays the main part is a born actor, as Konstantin and Aleksei remind him several times.

The class is getting excited — they all want desperately to join in. The enthusiasm of the “audience” is at least as palpable as that of a packed auditorium at a high-profile premier at the Bolshoi Theatre.

After their performance, the actors organize a small quiz and explain why Shishkin’s main character did not want to go to school. In a torrent of enthusiasm, the children tell their stories of how they avoided coming to school: you can drip iodine onto sugar, pour glue up your nose, and so on.

Aleksei and Konstantin enjoy talking with the children, but are only worried by one thing: they need to get up early, as lessons start at 8 a.m.; and in the evening they will perform in another play. But now the main thing is the children.

The actors at Teatr.Doc share responsibility for the productions.

The group is formed of Aleksei Bogachuk-Petukhov, Konstantin Kozhevnikov, Irina Vilkova, Tatiana Parshina, Lyubov Strizhak and other participants in the project. They have a Facebook page titled “Literary Masterpieces for Schoolchildren,” where they announce events, pool ideas and resources for future performances, and share their thoughts on how the shows went. There are currently several different performances on the go.

At a school attended by many children of migrant parents, the troupe prepared a performance based on Nikolai Gogol’s “Night Before Christmas” — the story is told using the text and involving the pupils. “This summer we worked at summer camp organized by a migrant school.

Here we performed ‘Romeo and Juliet’ with the kids. And the little girl who played Juliet burst into genuine tears when revealing her love on stage. Then I understood that we were doing something right,” actress Irina Vilkova says. “This is more than just an educational project; this is a whole new field of research, looking at the group of children for whom we are doing this. We are studying them and they are studying us and the theatre — and literature, of course.”

The troupe has made four trips to the Mozhaisk Educational Institute for minors. Here they held a master class and actor’s training, invited a stuntman to show tricks, and performed sketches with the kids.

The children were surprisingly quick to catch on to the idea and showed genuine enthusiasm, happily taking part in the show and not even moaning when homework was handed out (the children were told to read Nikolai Gogol’s comedy “The Government Inspector’ in their free time). The theatre troupe will certainly be returning to check up on the children’s progress — or at least to see how well they did their homework.

Part of the Teatr.Doc project is sending actors out to take part in school activities. This project was thought up last summer. Its main aim is to employ professional actors to help introduce children to literary works on the school curriculum. The project “Masterpieces of World Literature on Stage for Schoolchildren” was approved by the Department of Culture for the city of Moscow and officially launched in 2012.

The theatre troupe Teatr.Doc went to two summer camps and successfully performed several performances together with the children. Artistic director of Teatr.Doc, Elena Gremina, was responsible for coming up with ideas. She hopes that, in this way, through performance, interaction and communication, and through becoming acquainted with the most famous works of literature, the children will start to show an interest in reading.

This is especially necessary in this modern era, as computer games and social networks have replaced this simple pleasure for both children and adults.

All the plots and works are presented using the story-telling genre (re-telling the story), and this is what all participants in the Masterpieces of World Literature on Stage for Schoolchildren do on a daily basis. Using this method, the actors have re-told several works of classic Russian literature and have explained literary terms in simple language that is accessible to children of all abilities.

The main aim of the actors at the theatre is not just to re-tell the stories of works featured on the school curriculum, but also to shed light on the fundamental values presented in these works — spiritual beauty, family values, respect for tradition, love for Russia and their hometowns.

The actors make sure their explanations of love and other things that are important in life, such as literature, strike a chord with everyone in the room, no matter what their age or learning ability. The problem in today’s society is that children hardly read at all, and interest in the printed word needs to be actively fostered.

Daniil, who regularly goes to the theatre with his mother, said: “I never get around to reading — either there is school or there are sports competitions. But I find it very interesting, and it’s a big plus for knowledge — you need to know about the work of great people.”