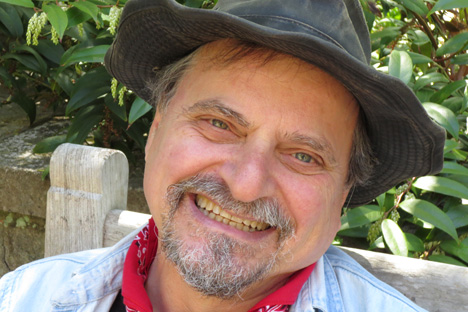 RBTH catches up with Russian writer and RBTH contributor Aleksander Genis during the celebrations for his 60th birthday. He shares a few anecdotes on his life and talks about his latest literary work.

Lyrical writer Tatyana Tolstaya once said about Russo-American writer, broadcaster and literary critic Aleksander Genis, “[he] is like King Midas; everything he touches turns to fine literature.”

Yet, this Ryazan-born King Midas, who has written more than a dozen bestselling books in Russian, doesn't seem to mind the simple life. An avid outdoorsman, and told one interviewer that he “loves mushroom picking, fishing and living in a tent.” When he starts talking about life after his arrival in the U.S. in 1977, his dinners with Joseph Brodsky and his literary efforts, however, one instantly realises that Tolstaya was right - each sentence pronounced is a work of art.

RBTH caught up with Genis, whose book of essays on bi-culturalism, "Red Bread," has recently been translated into English, in between celebrations for his 60th birthday on February 11.

RBTH: Happy Birthday week! Do you find this is a time for reflection?

Alexander Genis: I’d rather say it’s a time for hangovers. Even Beluga, the best vodka in this Universe, can be cruel when you are celebrating your birthday in the Russian way.

RBTH: You have told us before that you came to the U.S. because of Hemingway and Faulkner.  What was it like to move to New York in 1977? What were your first impressions? How hard was it to make a life here?

A. G.: The first impression was a terrible disappointment. All my life I had considered New York the capital of the future. Can you imagine my astonishment when I discovered gaslight jets in my room at the Broadway Greystone Hotel? It wasn’t Hemingway or Faulkner, it was “Sister Carrie” by Theodore Dreiser.

Only many years later I saw that I was right the first time: New York is indeed the capital of the future. It just wasn’t bombed like most Old World cities. That’s why New York can be archaic as well.  And even 9/11 didn’t change this.

1977 wasn’t the best year to start a new life because of the double-digit unemployment and inflation. The latter didn’t worry me - I barely knew what it was. Employment wasn’t a problem either. I found a job in the retail business that sold very expensive jeans. My task was to glue the label “Sasson” on the cheapest pants that our boss could find. Much later I found out that this was Postmodernism. So my literary career had begun earlier than I realized.

RBTH: Can you share any anecdotes from your friendship with Joseph Brodsky? What is your fondest memory of him?

A. G.: As soon as I found out that Brodsky and I shared a love for Ancient Rome and good food, I decided to invite him for a Roman feast. The most difficult part was the menu that I wrote using my rudimentary Latin. My Virgil on this endeavor was Virgil - and other ancient poets. Martial was very good, his epigrams described every dish that I cooked.

RBTH: What would you like to tell a new reader about “Red Bread,” which is available in English from Glas?

A. G.: I hope they’ll find that the essayist genre is not the exclusive property of West European literature. There are some wonderful essay writers in the Russian tradition, but we called them literary critics. For centuries literature has been taking the place of politics, parliament and free press.

Essays on poems and novels became the usual way to talk about everything. For me the essay is a peculiar kind of non-fiction that is closely connected with poetry. Journalism narrates, an essay expresses. The first starts with fact, the latter begins with the Word, and by the way finishes with it too.

RBTH: Who are your favorite living authors writing in English and writing in Russian? Which novels are on your bedside table right now?

A. G.: It’s easy with Russians: Tatyana Tolstaya, Vladimir Sorokin and Victor Pelevin. But talking about contemporary American literature becomes tricky. To be brutally honest I dare say that the best and most original authors are Tarantino and the Coen brothers.

I do not know anybody whose writing could be compared to those virtuosos. It is a sign of our times. Today’s novels are films, today’s long novels are TV serials. I even think that Tolstoy would write “War and Peace” for the screen. In some sense, the great novelists did write cinematically. Eisenstein considered Dickens the inventor of cinematography.

There is no novel that is my favorite, just some poetry, Medieval Armenian ballads to be precise. This summer I will go to Erevan to participate in “Dovlatov days.”  And if one wants to really understand foreign culture one must love its poets and cuisine. I tried this method in the U.S., when I read Wallace Stevens and enjoyed dinner in a Maine lobster pit.

RBTH: Which literary prize committees are you on in Russia? How much do these prizes boost the writers’ careers internationally?

A. G.: The most memorable was the 1993 Russian Booker prize. Among the judges were legendary people like songwriter Bulat Okudjava and academic V. Ivanov. I was the youngest member but with an important mission to promote Victor Pelevin, whose first book ‘Blue Lantern’ I had just discovered.

I brought to London five copies of it and gave them to every member of our jury. Next morning Pelevin got his first award. I think that it helped his success in the West and East (in Japan particularly).

RBTH: What are you working on now, and when will more of your books be available in English?

A. G.: I gave myself a birthday gift and after four years of hard labor finished my new book titled “Reading Lessons.” I think about it as a love tale of one thousand and one nights spent with my library. I never found the perfect translator, so I had to raise one of my own. My son can handle my voice and soon there will be more available.